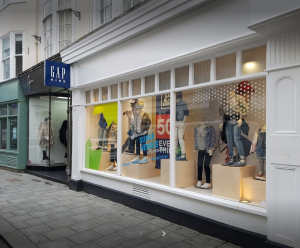 The clothing chain Gap has announced that it plans to close almost 20 stores across Britain and Ireland as part of a shake up.

But the American retailer would not say whether its two Brighton shops were among those facing the axe – nor would it say how many jobs were at risk.

There is a Gap in Western Road, Brighton, and a branch of Gap Kids in East Street at present.

The company lost £740 million in just three months because of the measures adopted in response to the coronavirus pandemic.

It said that it was closing 19 shops when their leases ran out at the end of next month as part of its plans to restore profits.

The closures are expected to leave the chain with about 50 standalone and outlet stores although their future is also under review.

The decision comes weeks after Debenhams, in Churchill Square, Brighton, closed for good and follows other retailers seeking rent cuts or shutting up shop.

Topshop, Cath Kidston and Thorntons are among the national chains with Brighton branches to have gone under during the covid pandemic.

Last October, Gap warned that it might close all its branches in Britain, Ireland, France and Italy as part of a review in response to a slump in trading.

The company said today that it was “keen to maintain a presence in Europe” but this could include a greater focus on its online sales.

Gap said: “We are proposing to close 19 Gap stores in the United Kingdom and the Republic of Ireland that have leases ending at the end of July 2021.

“These leases are not being extended due to the strategic review that we have under way.”