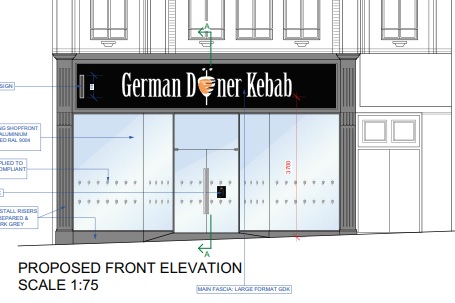 A gourmet kebab restaurant is planning to open below the lapdancing club in North Street.

German Doner Kebab has submitted a planning application to put a new shopfront in the unit currently occupied by the Bargain Plus gift shop next to Grace Gentlemen’s Club.

The restaurant chain already has planning permission for extraction and plant equipment to the rear of the unit.

The application for the extraction said: “This is a highly commercial area and the rear of the property serves a back of house function and as such that the subject proposal will not result in any harmful break out of noise over and above the existing level complies with adopted local plan policy.

“The proposed scheme will result in investment and the creation of approximately 30 new jobs in the city centre at a time when the high street is suffering.”

In February, the German restaurant chain announced plans to open 47 restaurants this year, in addition to the 12 it opened last year.

It first came to the UK in 2016, and has several branches in London.

The restaurant says its kebabs are made totally differently to other kebabs, and are “a nutritionally sound gourmet food experience”.

The applications for the Brighton branch have been made by Bixbite BN Ltd, a Weybridge company set up in February this year by Irish entrepreneur Kieran Rabbitt.