A former clothes shop could become an Indian restaurant if it secures an alcohol licence. 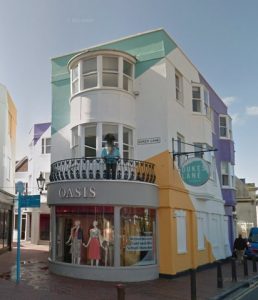 Mowgli Street Food wants to open its Brighton branch in the former Oasis store in Duke’s Lane, but its original plan for late-night opening faced opposition from neighbours.

After objections from three neighbours to alcohol sales from 7am to 1am, seven days a week, the company reduced its proposed hours to noon to 10pm Sunday to Thursday, and noon to 11pm on Fridays and Saturdays.

The reduced opening hours fit in with Brighton and Hove City Council’s licensing policy for restaurants.

Neighbours were worried that customers drinking in the early hours would lead to disorderly behaviour in the area.

One resident, whose details were redacted by the council, wrote: “We feel the hours requested for the sale of alcohol are unrealistic and as much as we are happy that the unit may be let and will therefore add more of a ‘vibe’ to the lane we do feel this is unrealistic and will not allow us to enjoy a peaceful sleep.

“It will also bring in an unwanted crowd into the Lanes at late times of the night/early morning, bringing in drunk and disorderly behaviour in what is known as a prestigious lane.”

Conditions on the proposed licence would limit alcohol sales to people seated at tables with a main meal only, with no standing and drinking at the bar.

Mowgli Street Food has agreed that it will not offer a delivery service or alcohol off-sales.

The company’s licensing agent, whose details were also redacted by the council, said that there was no plan to offer al-fresco dining.

The agent said in a letter to the council: “Brighton is viewed as a ‘hip and happening’ place and Mowgli wants to be a part of the considered regeneration of Duke’s Lane and the surrounding area which looks prime to attract some top-class operators.

“Mowgli wants to lead the march on this to bring life to an empty unit, which I’m sure will encourage other high-end operators to do the same, improving the quality of life for everyone in the area.”

Mowgli was started seven years ago in Liverpool by a former barrister Nishan Katona who is now a chef and food writer.

The licence application is due to be decided by a council licensing panel at a hearing which is due to start at 10am on Monday 6 September. The hearing is scheduled to be webcast on the council website.