Elbow were ‘Magnificent She (Becky) Says’ 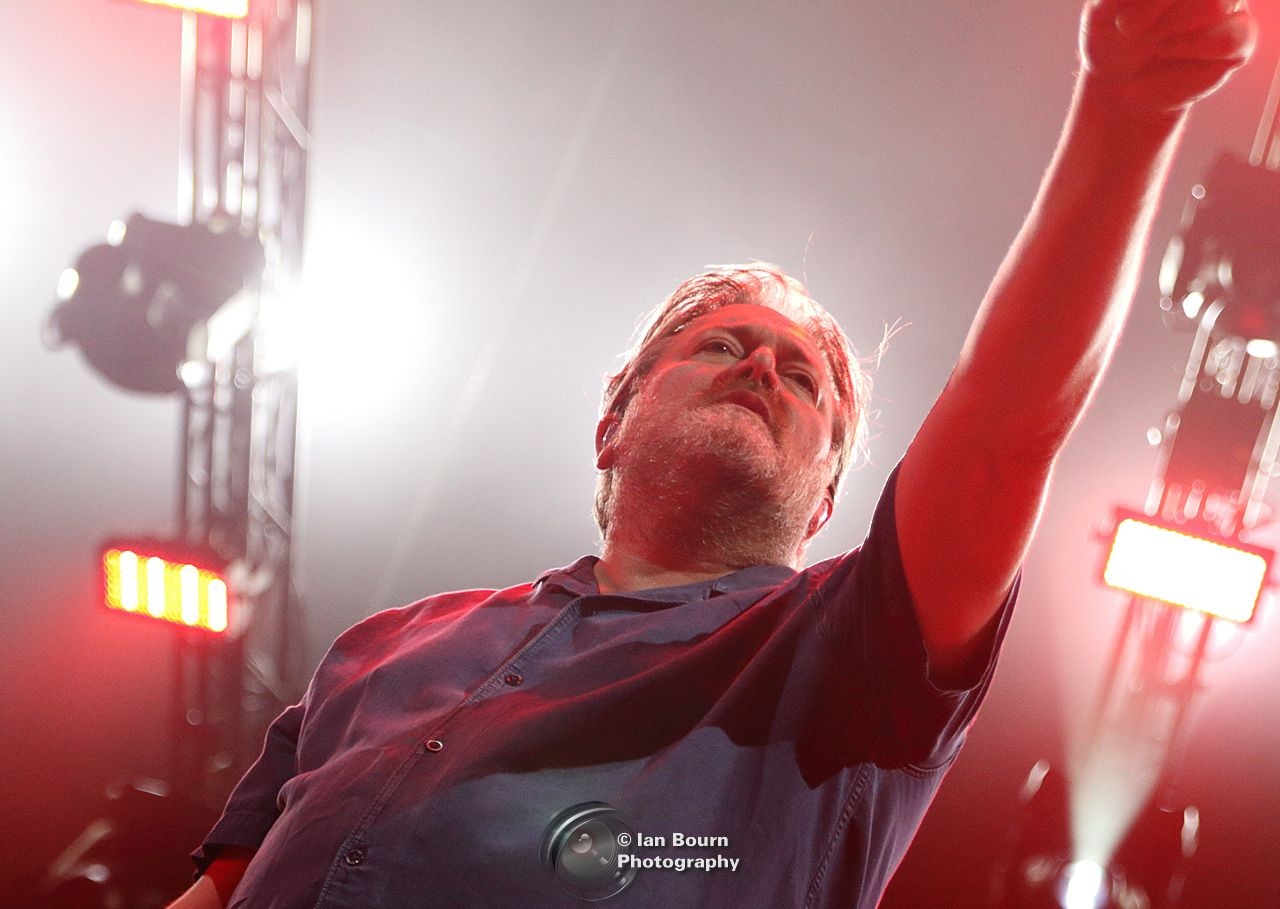 Brighton is really buzzing again with so many decent concerts going ahead after being rescheduled and new ones cropping up all of the time, it has been really difficult which ones to select. Tonight was no exception as we were based at the Green Door Store from 2pm to cover the first of two consecutive days of their 10th anniversary ‘234 Fest’ (reviews to follow), but then there was Elbow (stylized as elbow) performing live at the Brighton Centre and proceedings were starting at 8pm. The plan was therefore, to enjoy seven of the ten bands at the ‘234 Fest’ and then race down to the Brighton Centre for elbow and friends, and that’s exactly what happened. 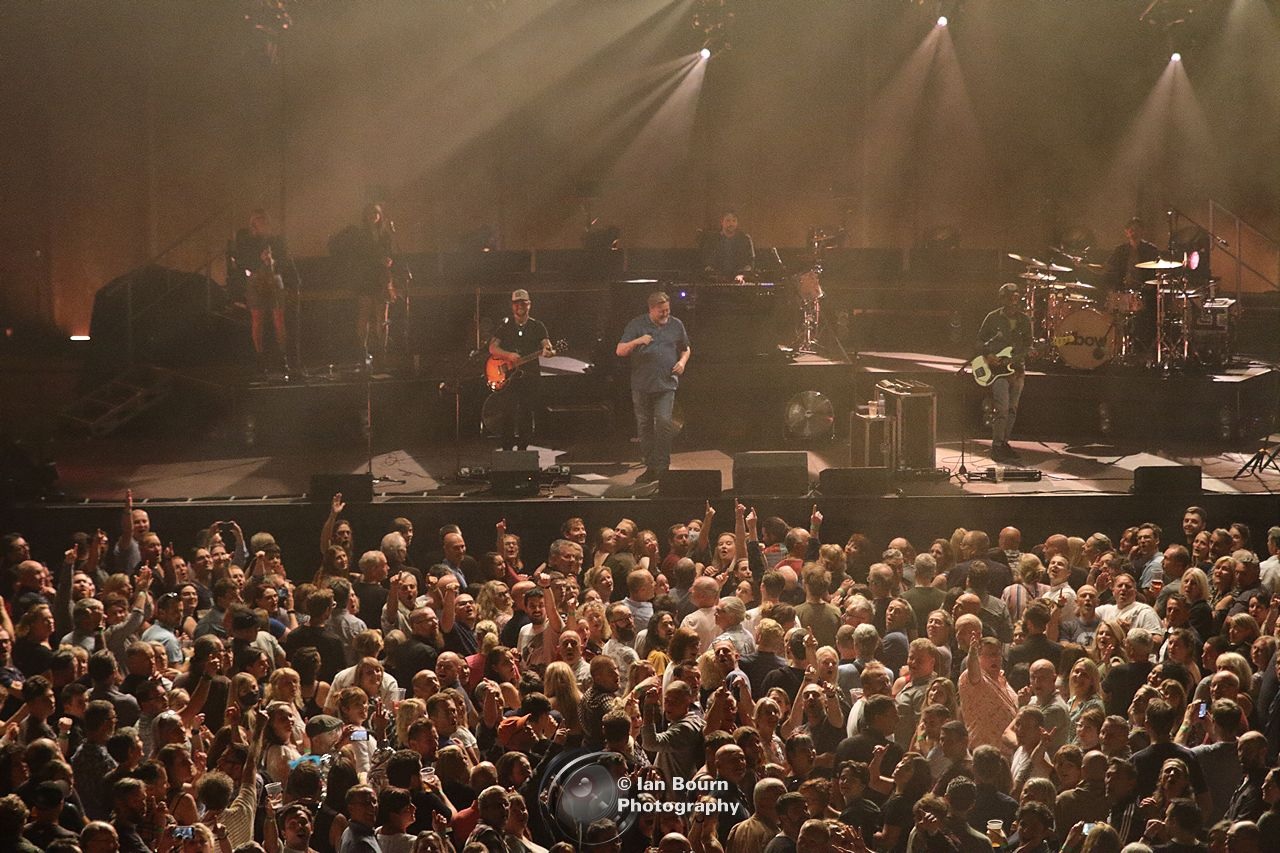 Can you see yourself if you attended? Brighton Centre 18.9.21 (pic Ian Bourn Photography) (click on pic to enlarge!)

I must admit that I was slightly bemused as to why the Brighton Centre was swinging open its door at 5:30pm, when the first act were appearing on stage at 8pm. The reason became apparent as the support artist Jesca Hoop graced the stage at 8:08pm until 8:40pm and then Peter Alexander Jobson immediately followed at 8:41pm until 9:00pm, and then elbow arrived at 9:02pm and played live until 10:55pm. There simply was no let up in the music. I have been continually attending Brighton concerts since 1978 and cannot ever recall this happening before! Are they setting a precedent? 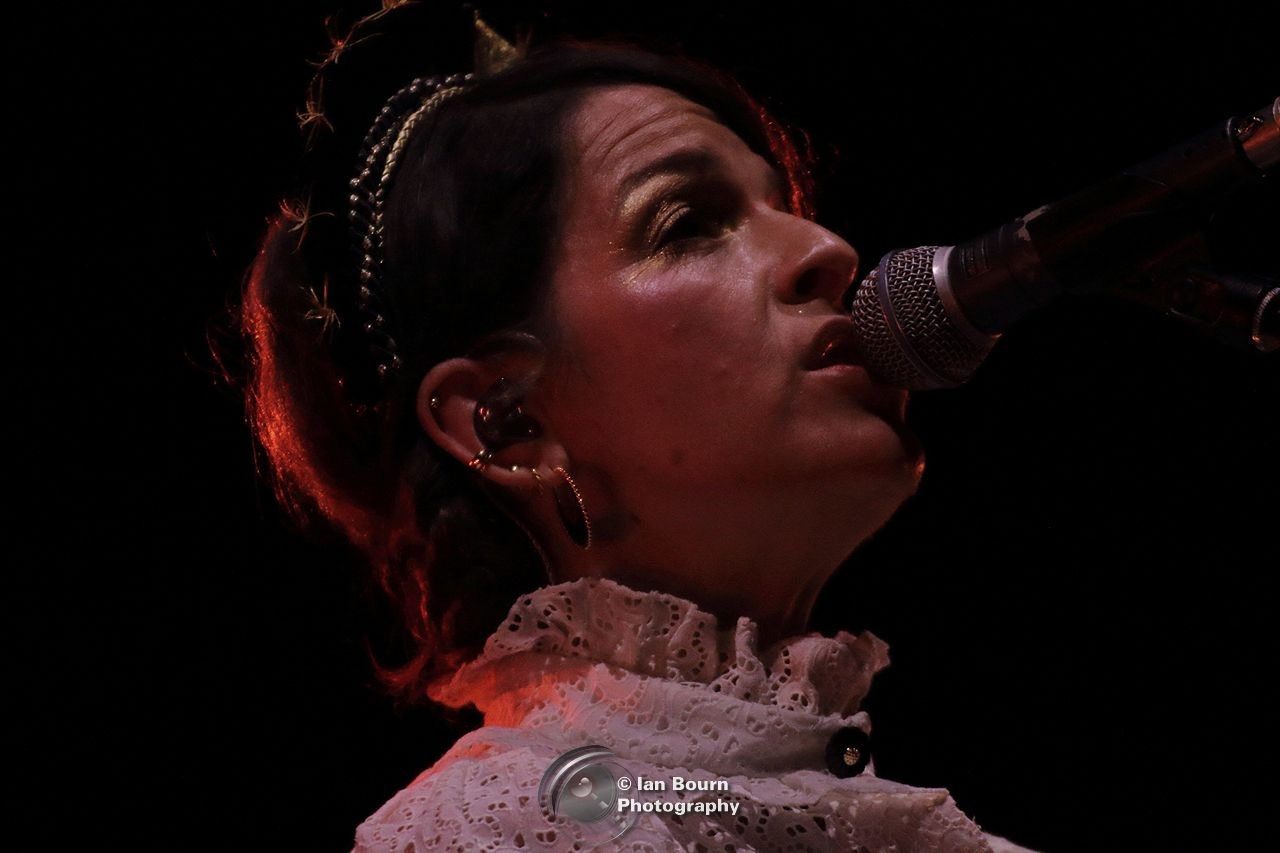 Jesca Hoop (born Jessica “Jesca” Ada Hoop on 21st April 21 1975 in Santa Rosa, California) is an American singer-songwriter and guitarist, who writes and performs in diverse musical styles. She has released five studio albums of her own, as well as live, acoustic and dual albums with others.

Her latest album ‘Stonechild’ was released in 2019 and still is available on limited edition white and black marble vinyl, CD and cassette with an exclusive Jesca Hoop designed tea towel for those who actually enjoy washing up! View options HERE.

Jesca graced the Brighton Centre stage wearing a white lace top akin to something found on ‘The Waltons’. She had her guitar with her and was accompanied by two ladies, one of whom was in charge of her own Fender guitar and drum pads and the other (clad in black) was on the violin. 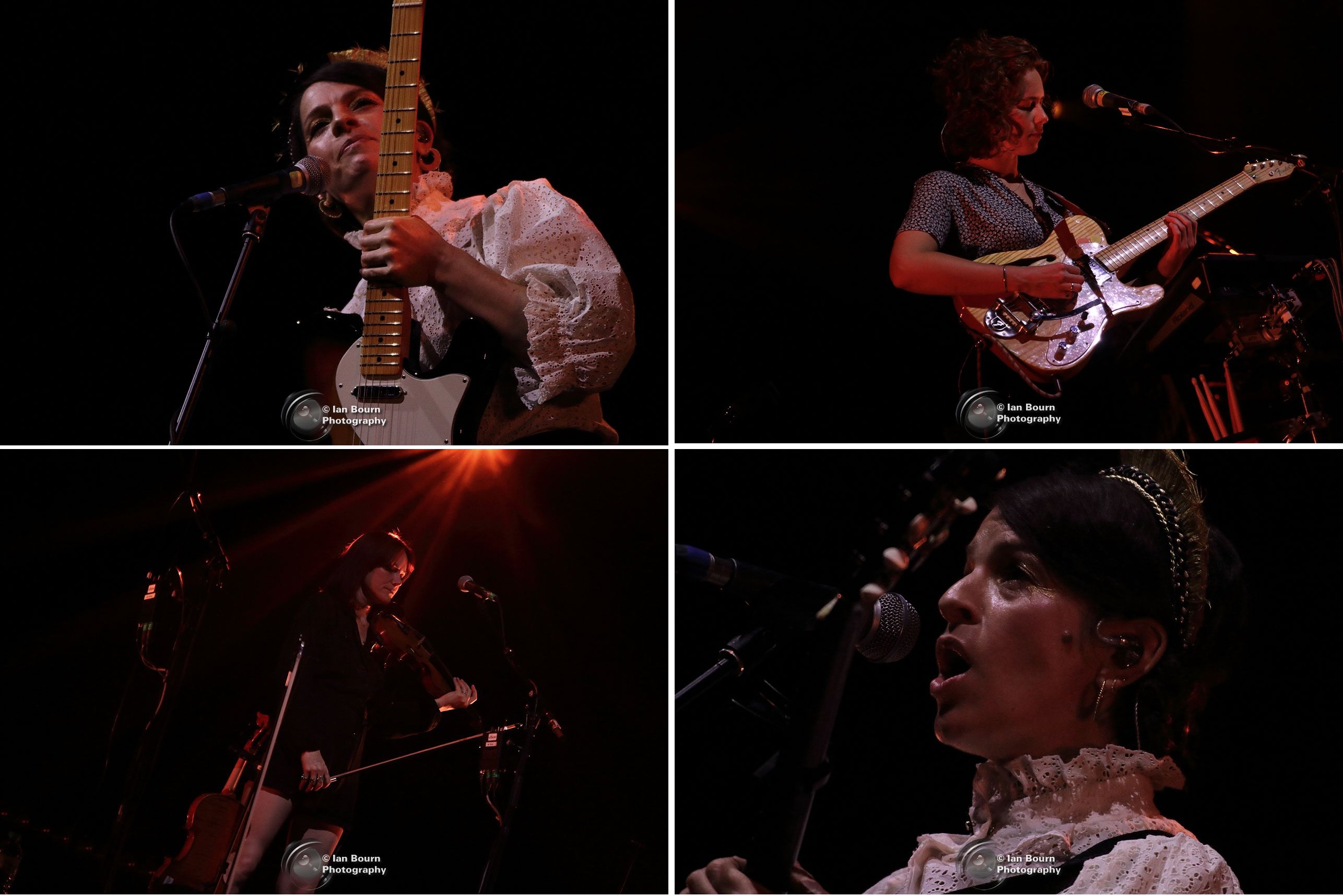 Initially, when addressing the audience, Jesca came across as a bit strange and quite possibly her humour might not have traversed the Atlantic. But as time went on I guess she warmed to us, but she did have quite a bit to convey in a slow manner.

As for the music, well, I guess the harmonies between the three girls was very good indeed and the overall sound reminded me of a blend of Joni Mitchell, Suzanne Vega and Dolores O’Riordan (RIP) from The Cranberries.

As a result of meeting Tom Piper, the touring manager of elbow, Jesca moved to Manchester in 2008 and has been playing live concerts ever since. However, she will remember tonight’s concert most fondly as it was apparently the very first time that anyone has waved their mobile phone in the air as a torch for her music. This choked her and she had to start her song again. More phones were hoisted into the air in support. What a lovely lot we were!

After a 32 minute set, it was time for Peter Alexander Jobson to immediately hit the stage for 19 minutes in order to link Jesca’s set with elbow’s via a keyboard piano style interlude laced with northern banter.

Some of you may recall him from being the bassist for the band ‘I Am Kloot’ from 1999 to 2016. The band released six studio albums and was nominated for the Mercury Prize in 2010 for their ‘Sky At Night’ album. 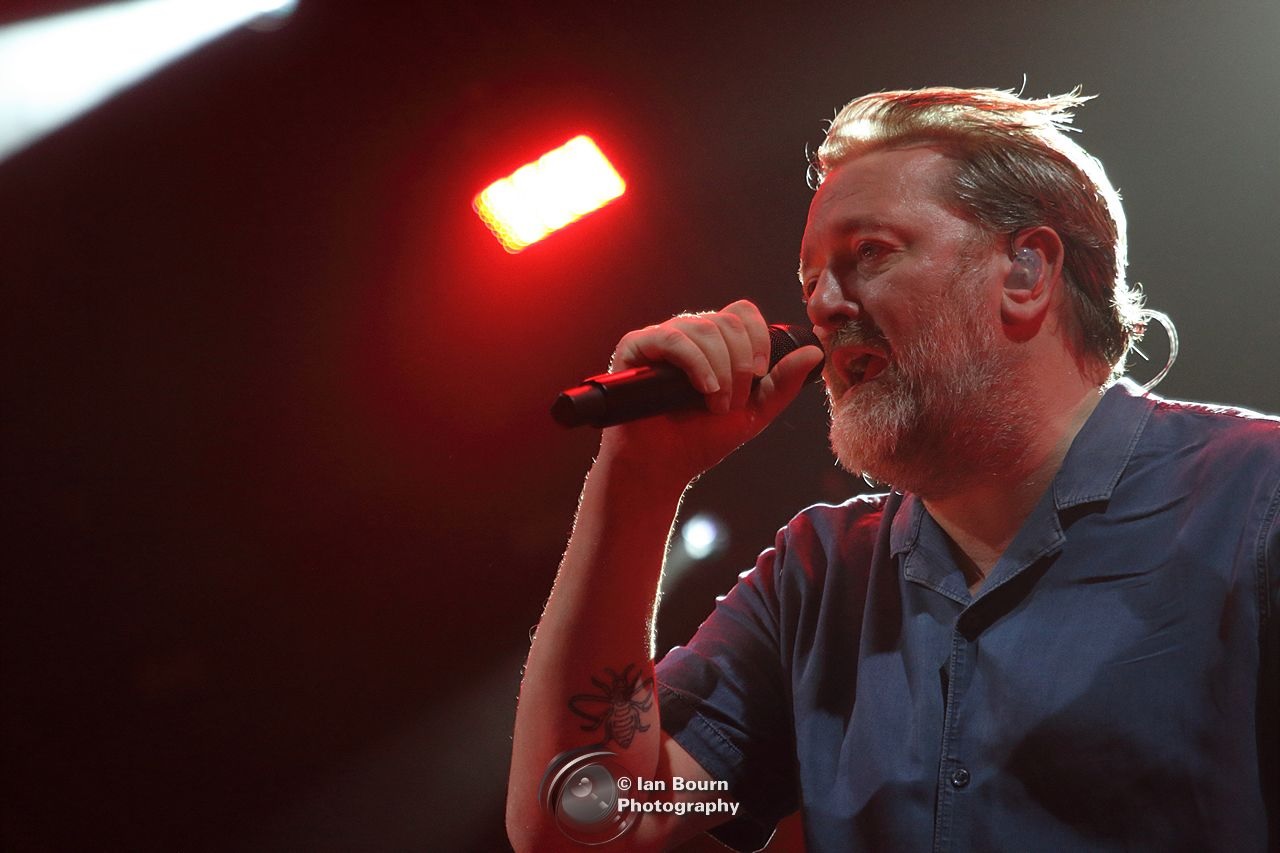 At two minutes past nine elbow took to the Brighton Centre stage in order to perform a 17 song 113 minute set. This evening the musicians consisted of the ‘rather likeable man of the people’ Bury born 47 year old portly and bearded Guy Garvey in his bluey-grey plain shirt and jeans on lead vocals and guitar, and his bandmate chums: Craig Potter (keyboard, piano, backing vocals), Mark Potter (guitar, backing vocals), Pete Turner (bass guitar, backing vocals) and session musician Alex Reeves (drums, percussion). They were assisted by Peter Alexander Jobson on electric bass as well as Gita Langley and Fiona Brice on violins. There was also another girl vocalist for one track, whose name I didn’t quite catch. 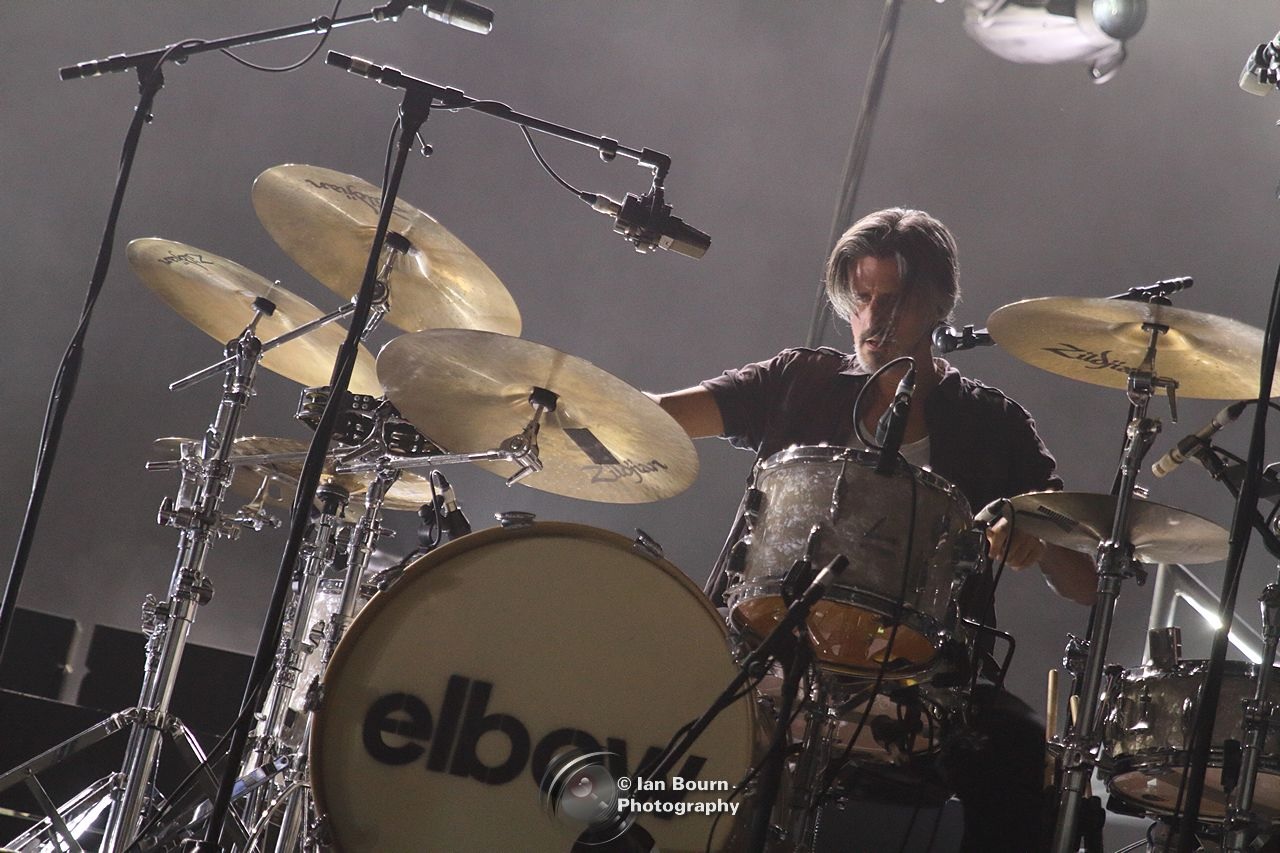 Avid elbow fans will probably understand the title of this review, but for the rest of us, I will now explain what “Elbow were ‘Magnificent She (Becky) Says’” refers to.
You may recall the UK No.1 elbow album ‘Little Fictions’ and the lead single ‘Magnificent (She Says)’, well it’s extremely likely that elbow would not be here with us tonight or possibly ever existed past a few months in 1997 if it hadn’t been for the generosity of a lady called Becky. The Becky in question is actually Guy Garvey’s sister, who is actually sat just four seats away from us this evening. (Yes she too was waving her mobile phone torch, but for her brother’s band). Anyway I digress, back in the very early days when the band literally had no money, one of them was unfortunately mugged and the band’s pedals and equipment was stolen. They honestly didn’t have any finances left to replace them, until Guy’s sister Becky stepped in and gave them the money! This generosity didn’t go amiss and so Becky is the only person to be thanked by Guy on their 2001 ‘Asleep In The Back’ debut album. It reads: “My sister Becky for her constant love, understanding, generosity, inspiration, and above all faith when I had none x”. 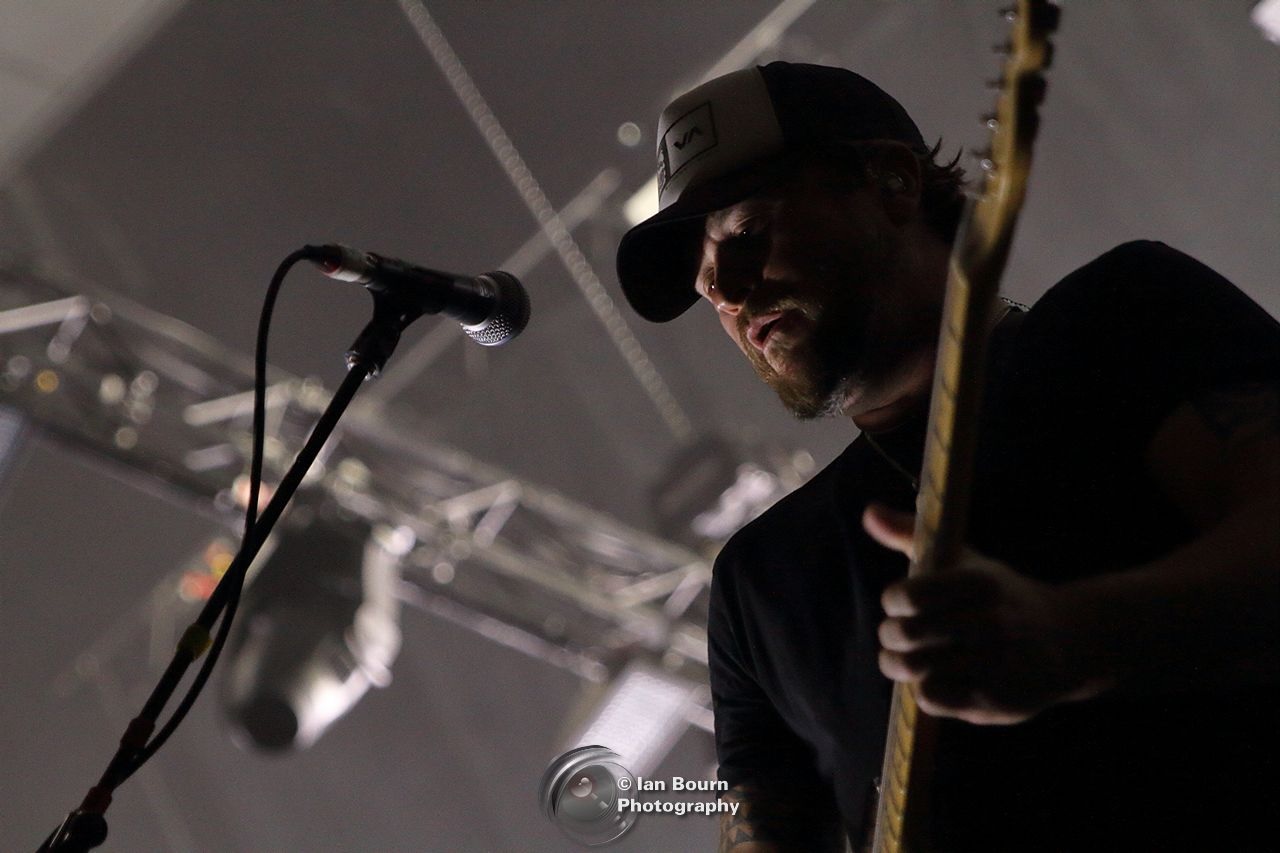 Brighton will also have fond memories for the bandmates of elbow as their forthcoming album ‘Flying Dream 1’ (which is due for release on 19th November 2021) was actually recorded here in the city during lockdown over a two week period in June at the Theatre Royal and produced by band member Craig Potter, having previously been written remotely by the members in their respective homes. Pre-order options for this album are available HERE. 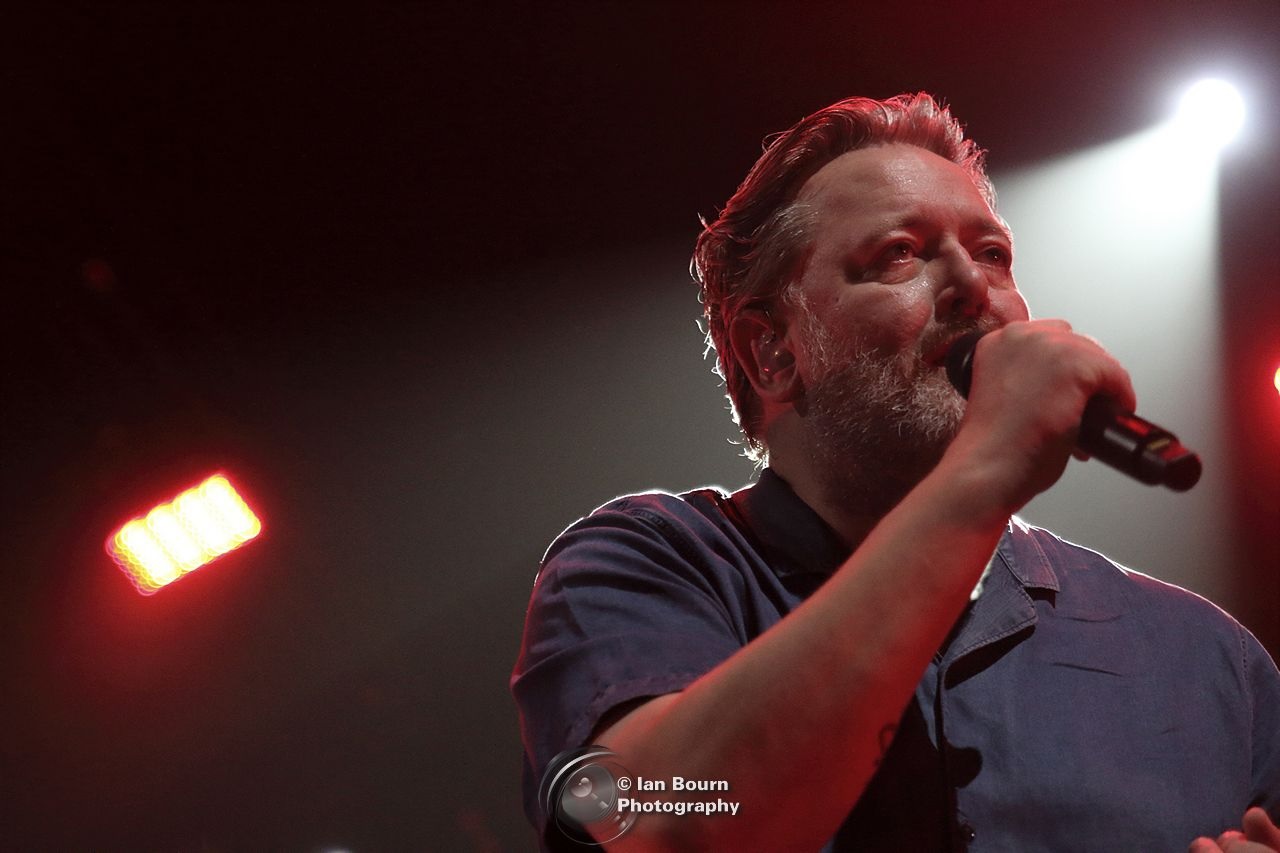 Back to tonight, and looking down from our lofty heights in the balcony, we could see so many computers and laptops that were operated by the sound and light guys in order to make tonight happen. It really is wizardry! So it was no surprise that the sound was crisp (and not as loud as back at the Green Door Store earlier this evening) and the lighting was really decent – although a challenge for the two photographers in the pit at the front) – with the overhead ones being in a 4,5,6,5,4 formation including (often green lasers). I particularly enjoyed the two stage level giant disco balls, as the lights would bounce off of them and somehow cause the illusion of having the ceiling come down on us, with also the assistance of the aforementioned 4,5,6,5,4 overheads. 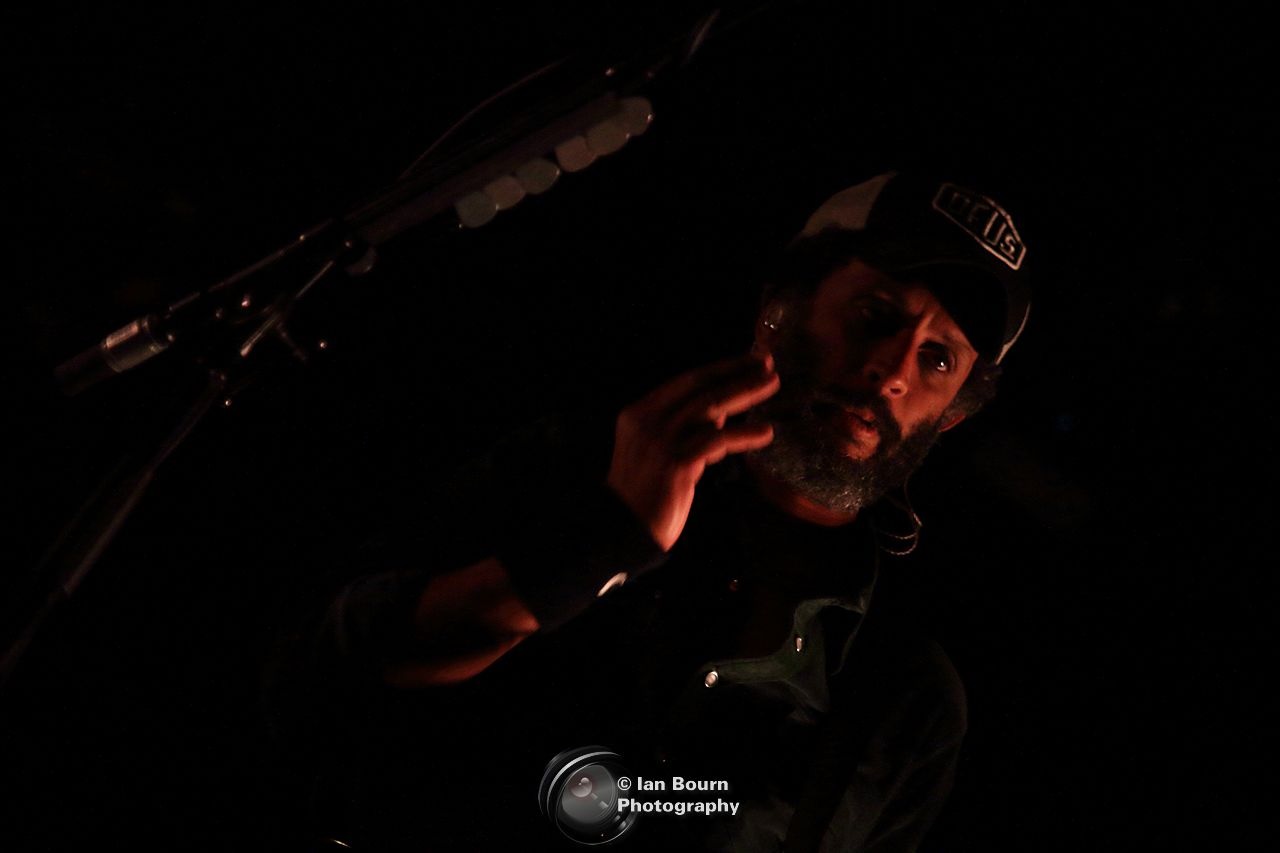 You then realise just what a wonderfully unique voice Garvey actually has. You always know it’s him on the radio. There aren’t many artists that you can immediately recognise every time when tunes are heard, but Garvey along with the likes of Richard Hawley and Björk are cases in question. No wonder this evening’s concert looks as though it has sold out.

This was my first brush with elbow and I have to own up that I was primarily only here on three counts. One being my favourite elbow song ‘Magnificent (She Says)’, two being the timeless and legendary ‘One Day Like This’, which is a staple of UK radio stations everywhere along with the likes of Snow Patrol’s ‘Chasing Cars’ and The Killers ‘Mr Brightside’, and three simply because Guy provides the voice-over for the Sky Arts show ‘Guy Garvey From The Vaults’ which certainly comes up with some lost gems from bands back in the day! 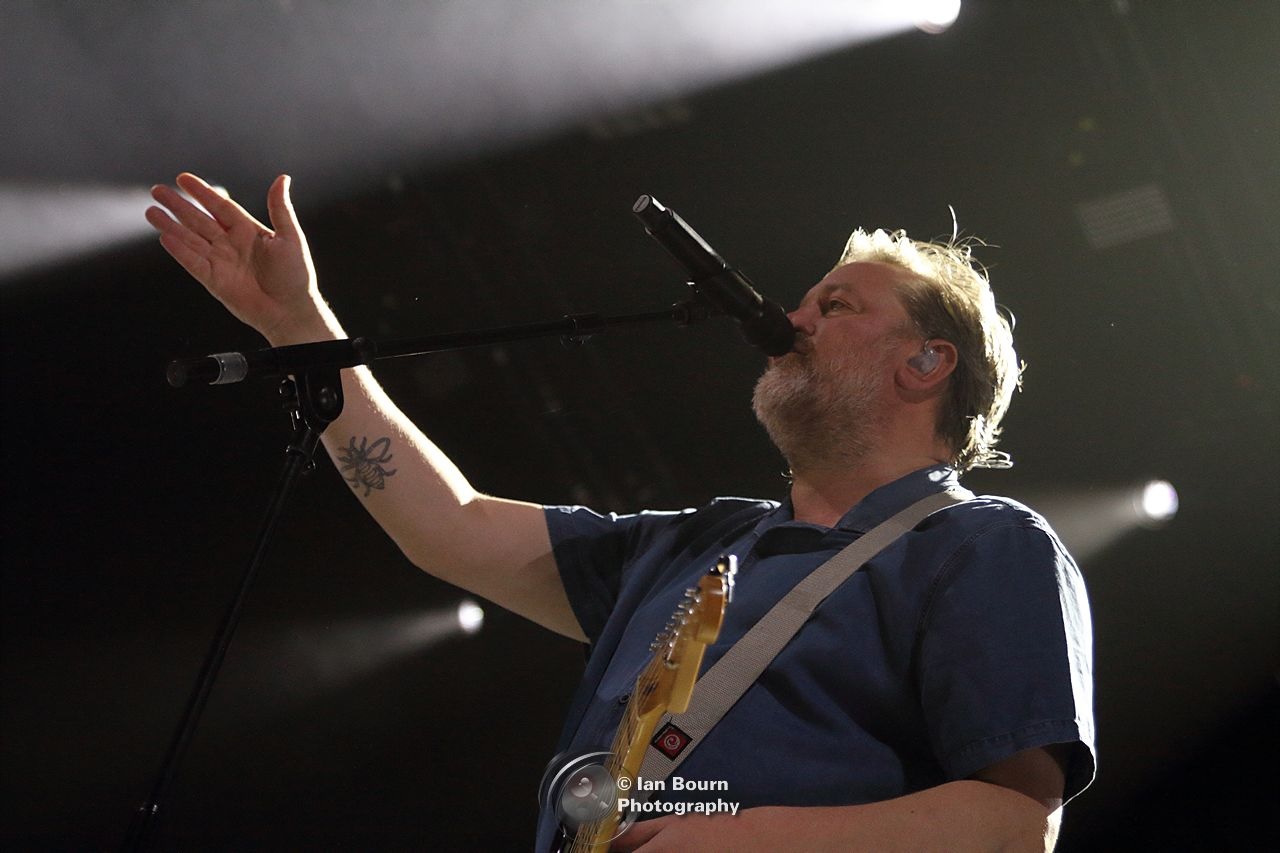 Points one and two were certainly catered for this evening, especially with the violins on ‘Magnificent (She Says)’ courtesy of Gita Langley and Fiona Brice, which made the hairs on my arms stand to attention. As for point three, were there any (elbow) hidden gems? Well, fans can decide by reading the 17 track setlist below.

A big shout out must surely go to the crowd with their participation in singing along to the encore songs ‘Lippy Kids’ and ‘One Day Like This’. I can’t actually ever recall such harmonious shared vocals by a crowd before! Must all have been taking singing lessons, me thinks! 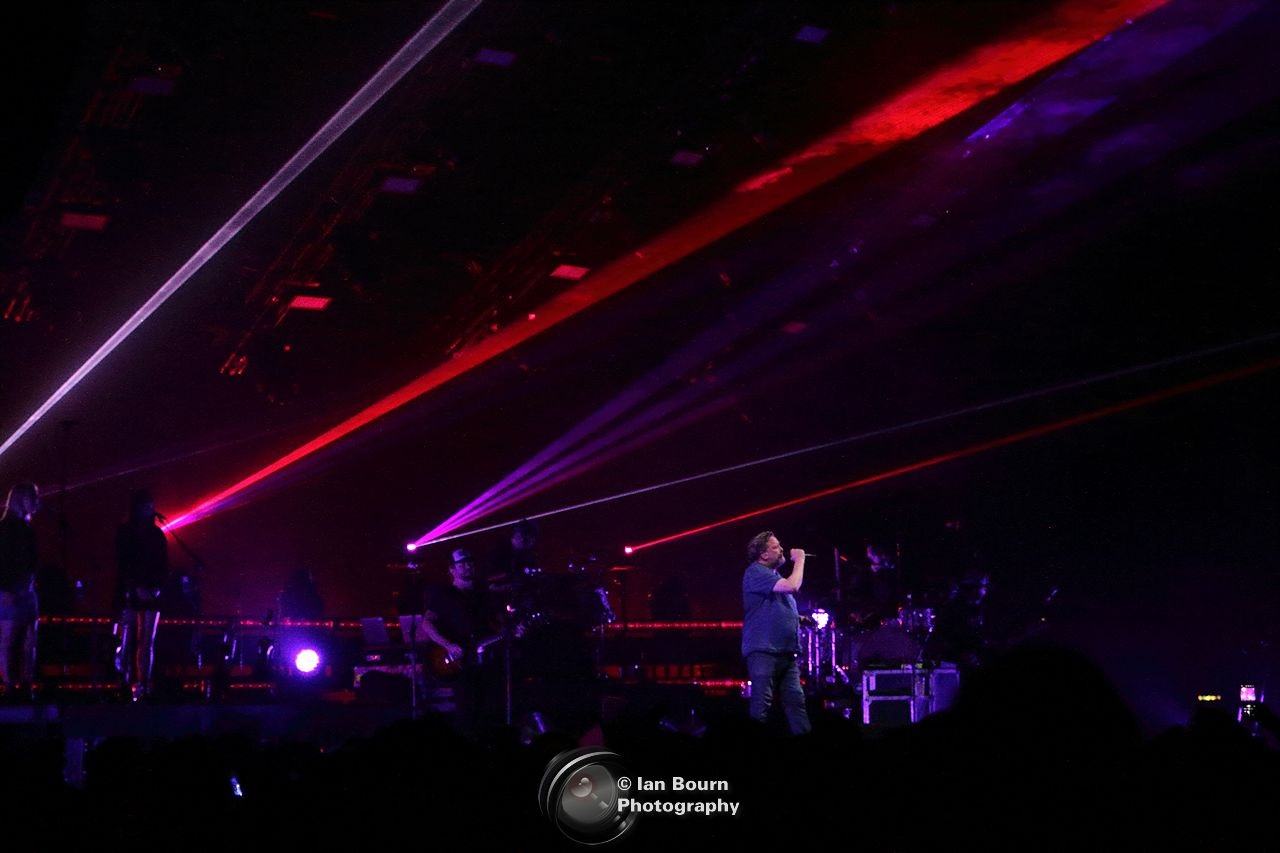 Visit www.elbow.co.uk for further information on the band. 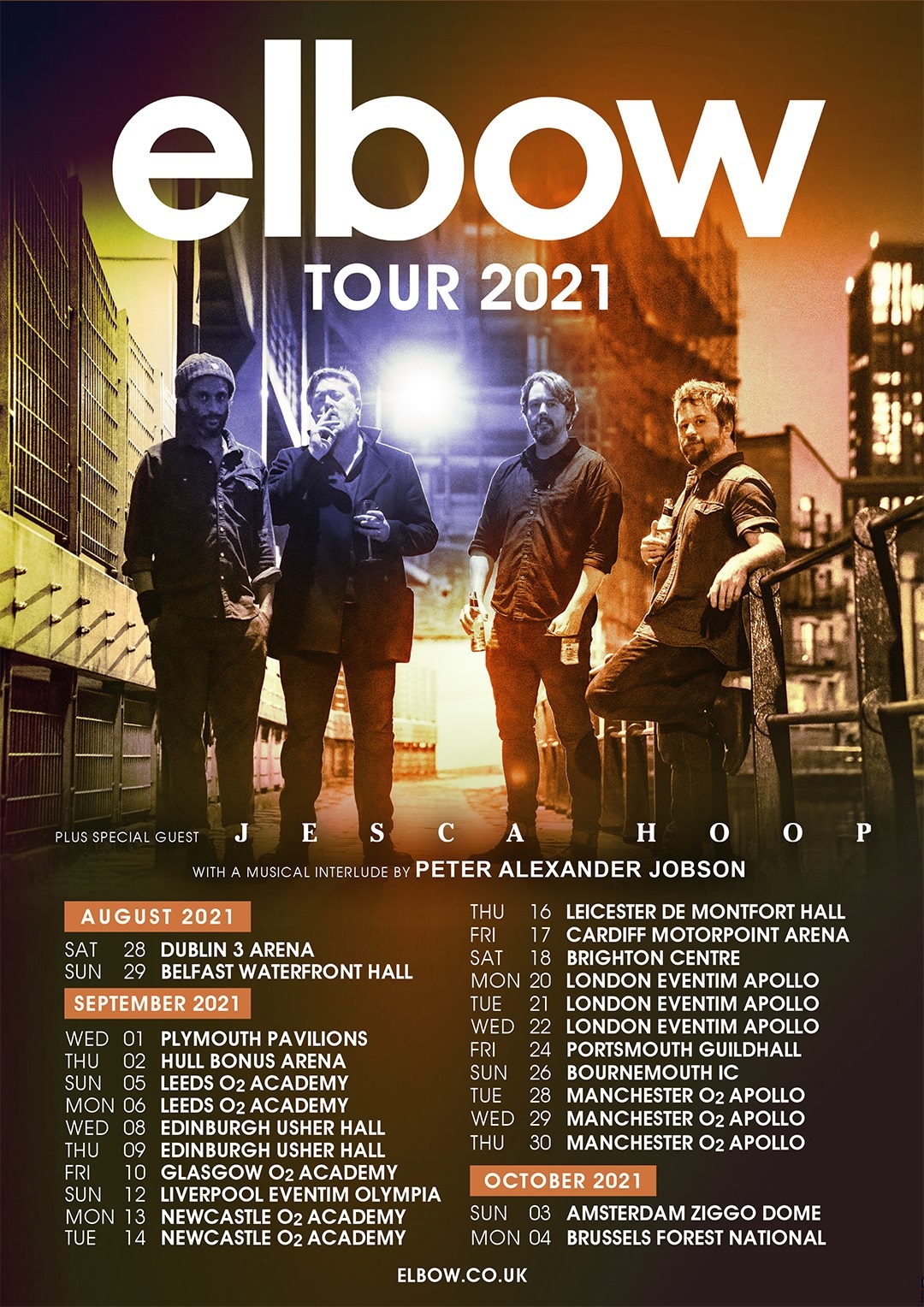