A specialist spirits company wants to run a pop-up shop in the centre of Brighton but faces official objections to its application for an alcohol licence.

O’Donnell Moonshine hopes to open its shop at 5 Hanningtons Lane at the end of this month and trade until the new year.

But Sussex Police and Brighton and Hove City Council officials submitted formal objections because the shop is in an area where council policy restricts new licences to tackle alcohol-related crime and disorder.

But last month another firm – specialist wine company Brazen – was granted a temporary licence for a pop-up shop for one month at the same location after reaching an agreement with Sussex Police.

The application from O’Donnell Moonshine is due to go before a council licensing panel, made up of three councillors, with a hearing scheduled for 10am next Tuesday (28 September).

Acting Chief Inspector Andrew Westwood said that The Lanes were in Regency ward which was ranked worst in Brighton and Hove for violent attacks and sexual offences.

The ward was also ranked second for alcohol-related incidents and, he said, the application lacked information about crime prevention, risk assessments and staff training.

He was also concerned that the applicant had not consulted the police before seeking a licence and had not provided any reason to justify an exceptional departure from licensing policy.

Council licensing official Jo Osborne said that the council’s policy existed because of the saturation of licensed businesses and the number of people that they drew to the area.

She said that O’Donnell Moonshine would need to show that its application would not have a negative impact on the area and explain its exceptional circumstances.

O’Donnell Moonshine’s managing director Max Ruther, 33, suggested more conditions that could be attached to the licence after the police and council lodged their objections.

Mr Ruther wrote to the council’s licensing department and apologised for his lack of knowledge about the location and licensing policy.

He said that the shop would have security cameras and staff would receive regular relevant training. 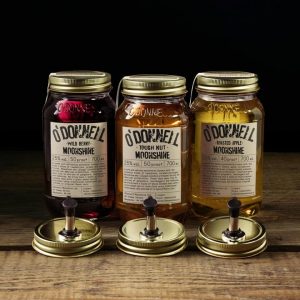 In response to concerns that most drink-related crimes occurred after 9pm, he proposed trading from 11am to 8pm from Monday to Saturday and from noon to 6pm on Sundays.

He said: “O’Donnell Moonshine is the only UK-based Moonshine company providing its customers with a historic and cool drink adapted to the 21st century and therefore adding a completely new facet to the UK drinks market.

“Brighton has been chosen as the first location for a pop-up shop outside of Manchester due to the vibrant and open-minded society with a very cool setting of The Lanes.

“We provide a unique taste experience paired with a unique packaging which is designed for ‘at home consumption’ or ‘as the perfect Christmas gift’ and therefore adds to the attraction of Brighton city centre as a shopping location in the lead up to Christmas.”

Apart from its shop in Manchester, the company has also traded at Christmas markets in Manchester, York and Edinburgh and food-themed events, including the BBC Good Food show.

Mr Ruther said that the premium pricing and “wide opening” of its traditional Mason jars would make easy consumption difficult.