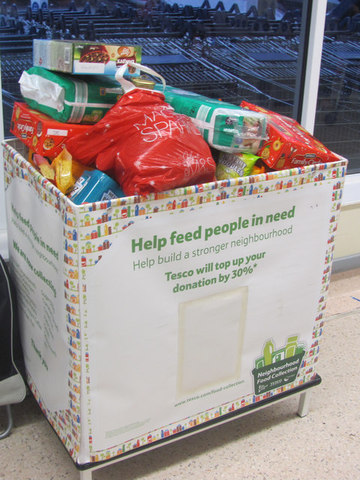 More money will be put towards tackling the “scourge” of food poverty and inequality next year.

Councillors backed taking a voucher or cash-first approach to support households in need of food and other essentials and underwriting a lease on premises used to store and process emergency food.

At the start of the meeting on Thursday, 4 November, Councillor Mac Cafferty said: “Foodbank workers and volunteers have told us what they need in terms of support. We’ve listened, and this report shows that we are taking action.

“The proposals show the necessity of a sustainable, supportive food network to tackle the source of food poverty and inequality in our city, building on our work to create the council’s food policy officer and being the UK’s first city to win the Gold Sustainable Food Award. The city is leading the way.”

Councillor Mac Cafferty said he will be speaking at COP26, the 2021 United Nations Climate Change Conference in Glasgow, where Brighton and Hove’s food network is due to be highlighted.

He stated the world’s eyes are on the city for its work on sustainable food as Brighton and Hove Food Partnership was one of three projects shortlisted in the Eurocities 2021 awards for “From Farm to Fork”, competing with Turin and Ghent, which won the award on Thursday night.

When agreeing to financial support for emergency food, councillors backed more support for Black, Asian and Minority Ethnic communities and to explore the cost of providing a community meals service.

Labour’s co-leader councillor Carmen Appich secured Green backing for her request for a report on the cost of community meals.

She said: “We are deeply concerned about older people and those with disabilities who may not be aware of or able to reach a meals club or other provision, who would be left behind without food, especially during the challenging winter months.

“It requires urgent action, and I do hope a report can be brought before the next Adult Social Care Sub-Committee on 11 January and a briefing on what steps can be taken and those councillors can take to protect our older and disabled residents from food and fuel shortages over the winter period.

“I’m really worried about the ones that don’t come and seek help, those who don’t engage and how we can somehow engage with those people as I’m worried about people sitting on their own in a freezing house without any food.”

The committee also agreed to consult with groups representing disabled people about any potential direct payments to their clients.

He said: “Winter pressures including the ending of furlough support, food supply chain issues pushing up food prices, fuel supply issues pushing up food prices, the seasonal demand for heating plus the usual expenses of the winter holiday period all combine to mean it’s very likely that demand for emergency food would increase from the levels we captured in the July survey.

“There is also less food available now from certain sources because of the supply chain issues.”

Natasha’s law has had an impact on surplus food supplies as businesses are concerned about donating food without correct labelling.

The law requires full ingredients lists on food after Natasha Ednan-Laperouse died from a severe allergic reaction to sesame which was not listed on a sandwich she bought.

Council deputy leader, Green councillor Hannah Clare said she would make the comment officers could not.

She said: “Whenever I read ‘fuel shortage’, I always want to replace it with Brexit because, let’s be real, less surplus food due to fuel shortages is because Brexit has caused this problem.

“We’ve got ourselves into this situation as a nation… sorry I needed to put that on the record.”

Councillor Clare asked what impact the end of the £20 Universal Credit uplift had on demand for emergency food and was told the need has increased, but the council will not know the full impact until the end of November.

Labour group co-leader councillor John Allcock said after speaking with a person who runs a community food outlet, he is concerned about support for minority groups and people with special diets as they do “not live in clumps”.

He said: “About ten per cent of their membership is Muslim, and they need to shop specifically to cater for Islamic dietary needs, basmati rice, olive oil and occasionally Halal meat, which is very expensive.

“They were concerned that resources that have been used or targeted for that is siloed rather than evenly spread around because the communities are spread out.

“That would apply to those who are vegan, vegetarian or those who have other special dietary needs. It calls for a more systematic approach to centralised resources and how they’re allocated.”

Councillor Allcock said there are geographically based food banks able to cater for a variety of tastes and needs across the city, from cultural to religious and dietary.

Specialist diets are why vouchers and cash first are the council’s preferred methods as then people can buy the food they need rather than that provided through surplus or bulk buying.

Three organisations in the city support Black, Asian and Ethnic minority groups and refugees, supplying appropriate foods receiving support for storage and transport from the council.