Christmas in Hastings at the Kid Kapichi ‘works party’ 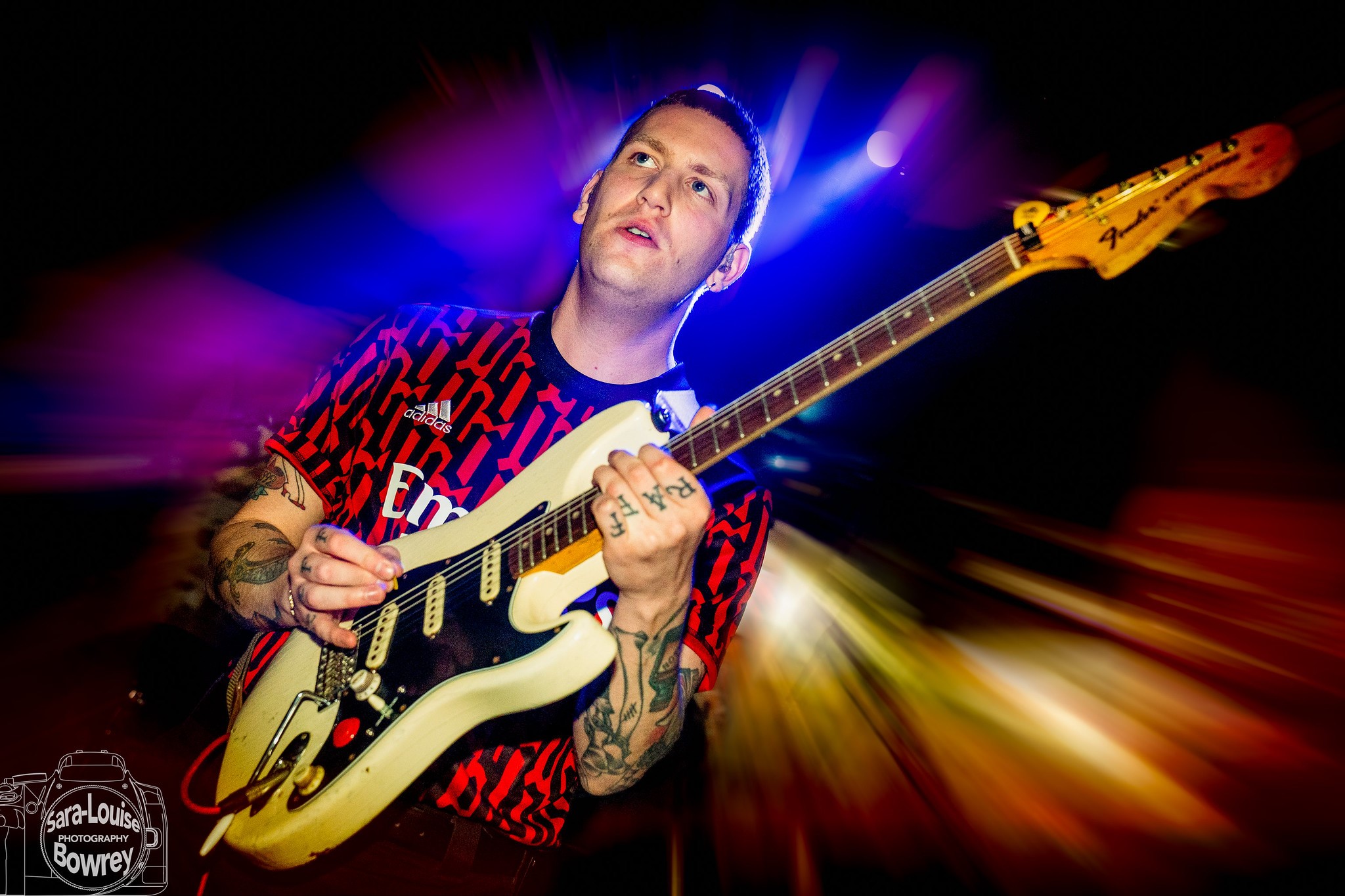 It’s been quite a year for Kid Kapichi. The Hastings four-piece have continued to build on their impressive reputation with a searingly hot fusion of contemporary rock and classic punk attitude, pumping out glam-tinged anthemic stompers, often with angry lyrics. Their debut album ‘This Time Next Year’ was released in February, and an autumn tour confirmed their status as rising stars with sold-out dates up and down the country, including The Scala in London. We reported on the storming final show at Patterns in Brighton – Read our review HERE. 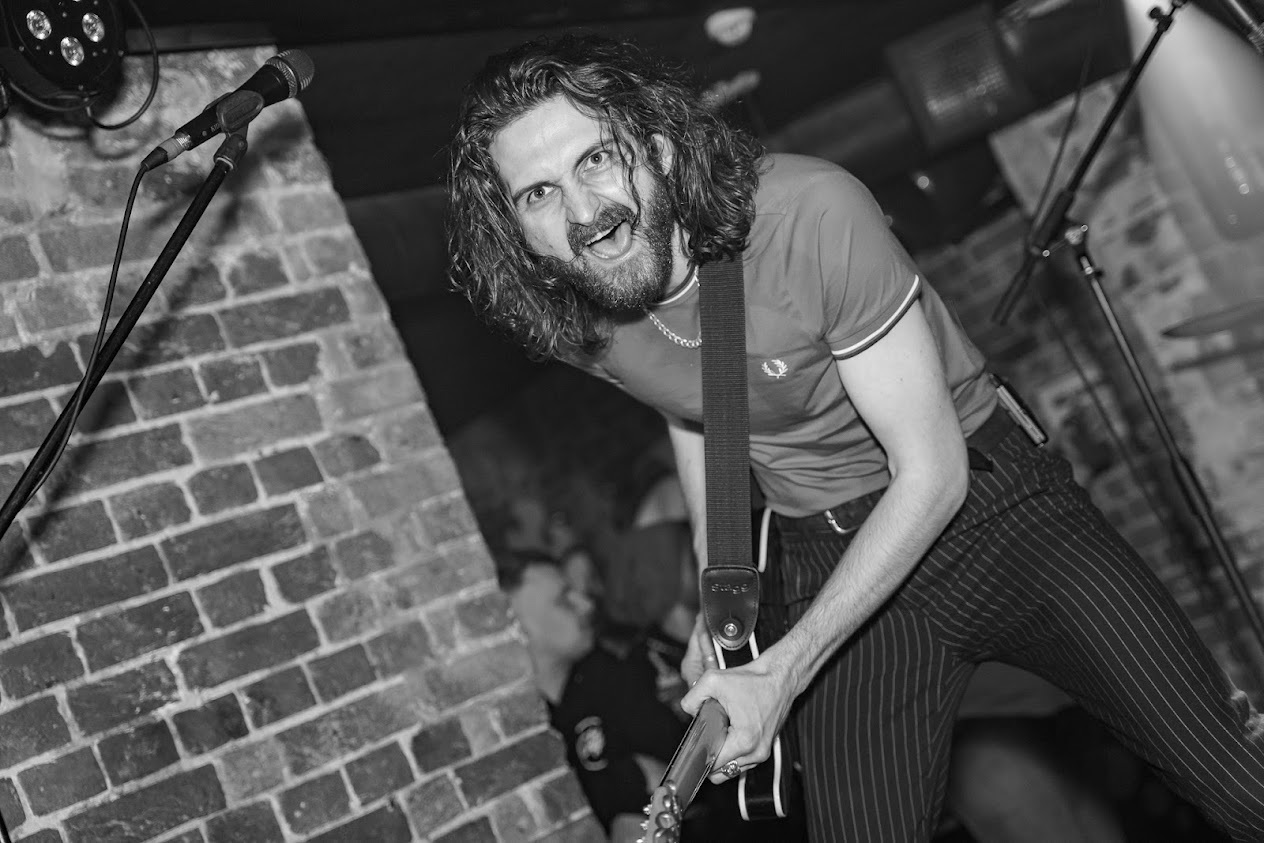 It’s traditional for the band to play their hometown just before Christmas, and tonight’s show at The Crypt seems to be one of very few events still going ahead at this stage in the gathering pandemic gloom. The venue is technically a nightclub, and in theory everyone here should hold an NHS Covid Pass and have registered a negative lateral flow test within the past 24 hours, so hopefully all is as safe as can reasonably be. The band mischievously refer to tonight as their ‘works Christmas party’, a sly dig at the current furore surrounding events from this time last year. It might as well be the Brighton and Hove News works do, as we have no fewer than two reporters and three photographers in attendance. 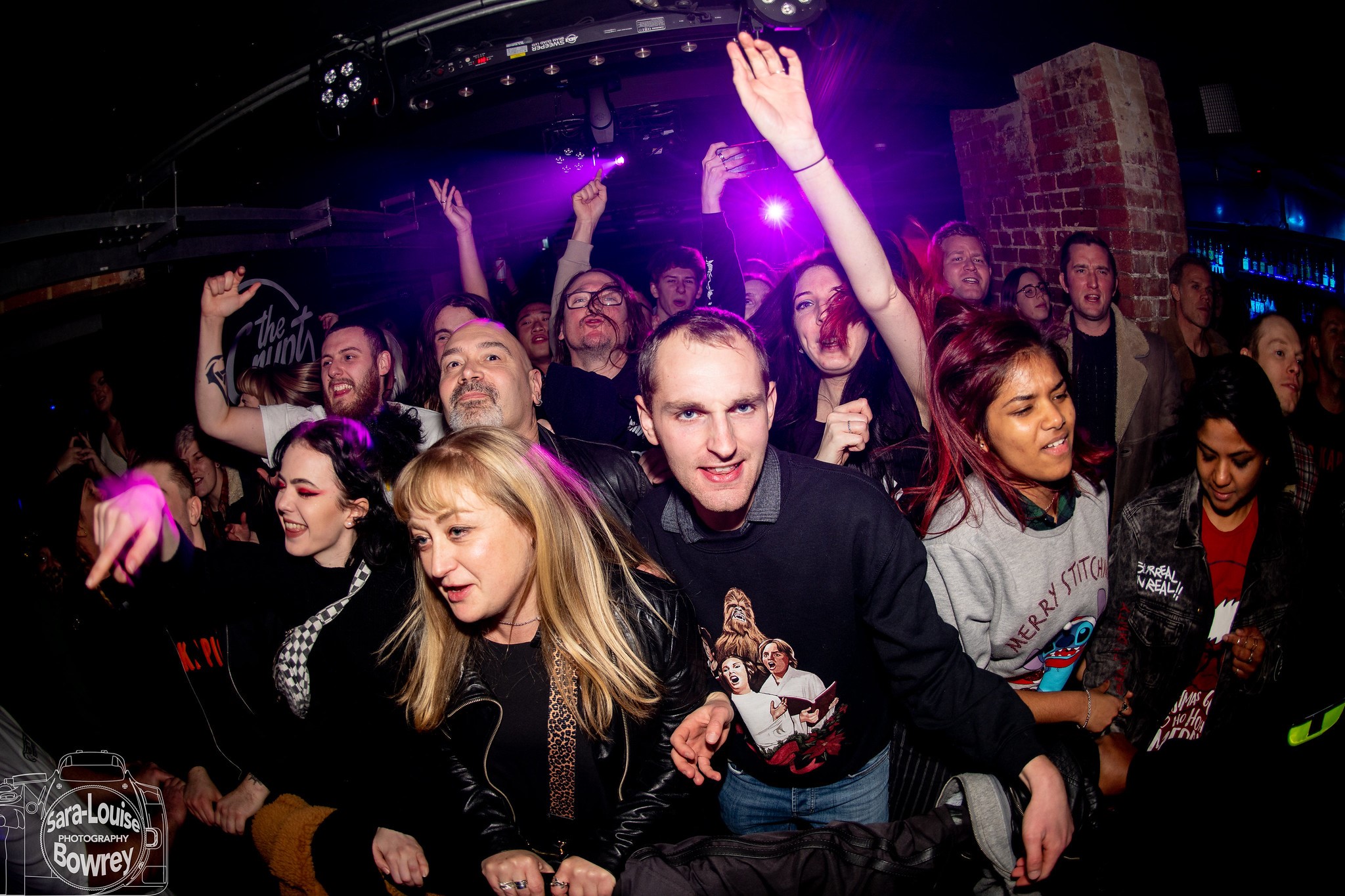 The audience at The Crypt, Hastings 21.12.21 (pic Sara-Louise Bowrey) (click pic to enlarge)

The Crypt is a long-established venue right in the town centre. It occupies a massive basement room, unfortunately bisected by two rows of brick pillars lending vital structural support. For live bands, the restricted sightlines tend to funnel the audience into a narrow strip down the centre, which makes for a cosy and fun atmosphere. The small stage area is bounded at the sides by columns, effectively two brick walls. A single tubular barrier is optimistically placed to separate bands and audience. 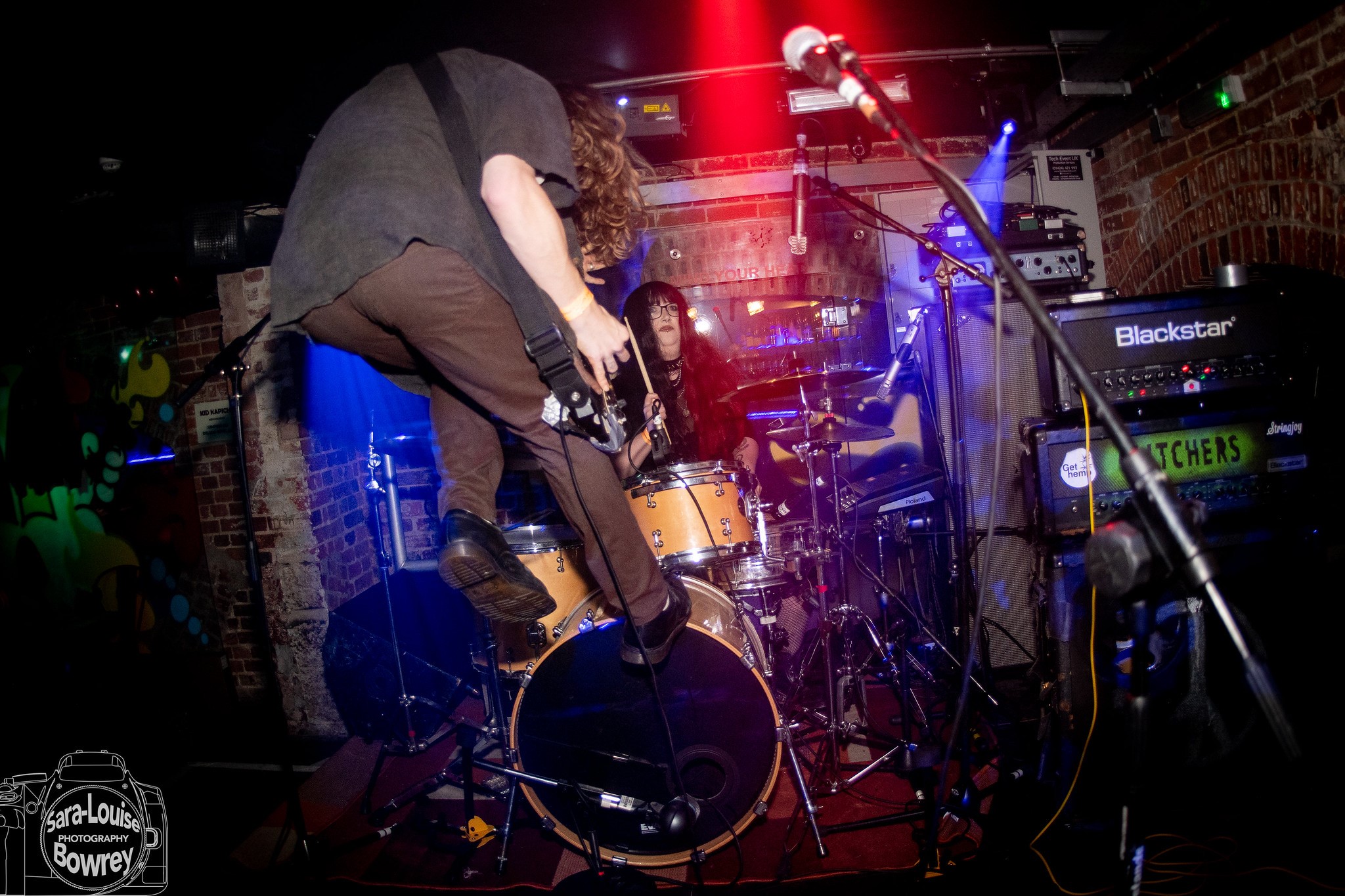 First up are Glitchers, a punky guitar and drums duo whose usual milieu is guerrilla gigs in shopping precincts. They have been busy breaching the peace in High Streets up and down the land, and even managed an impromptu performance on the back of a truck outside Downing Street. Tonight, for a change, they are under the main shopping area, and it quickly becomes clear that their energetic performance is going to come up against the physical constraints of the room. 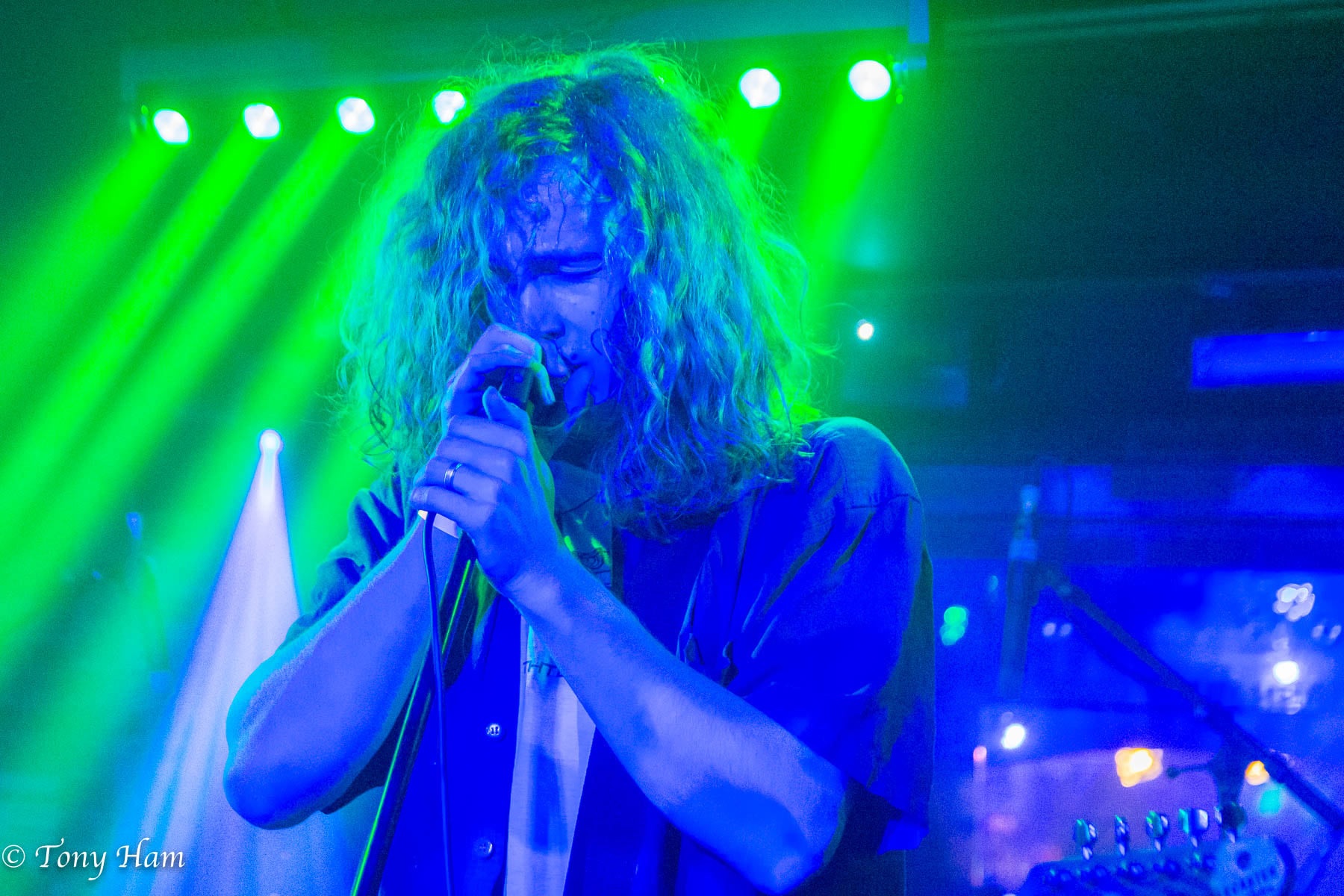 Vocalist and guitarist Jake is a one-man maelstrom, cannoning off the walls and barrier, rolling about on the stage, and screaming passionately down whichever microphone’s stand is still upright. There are two set up, and each one lasts about thirty seconds before being sent flying, the mic hitting wall or floor with a satisfying amplified thud. The stage tech is having a busy time, repeatedly scurrying on to right felled equipment. A seriously road worn Telecaster is sending howls of guitar through an even more thoroughly abused speaker cabinet. Behind the kit, Sophie lays down a simple but effective heavy beat, much in the style of Meg from The White Stripes. 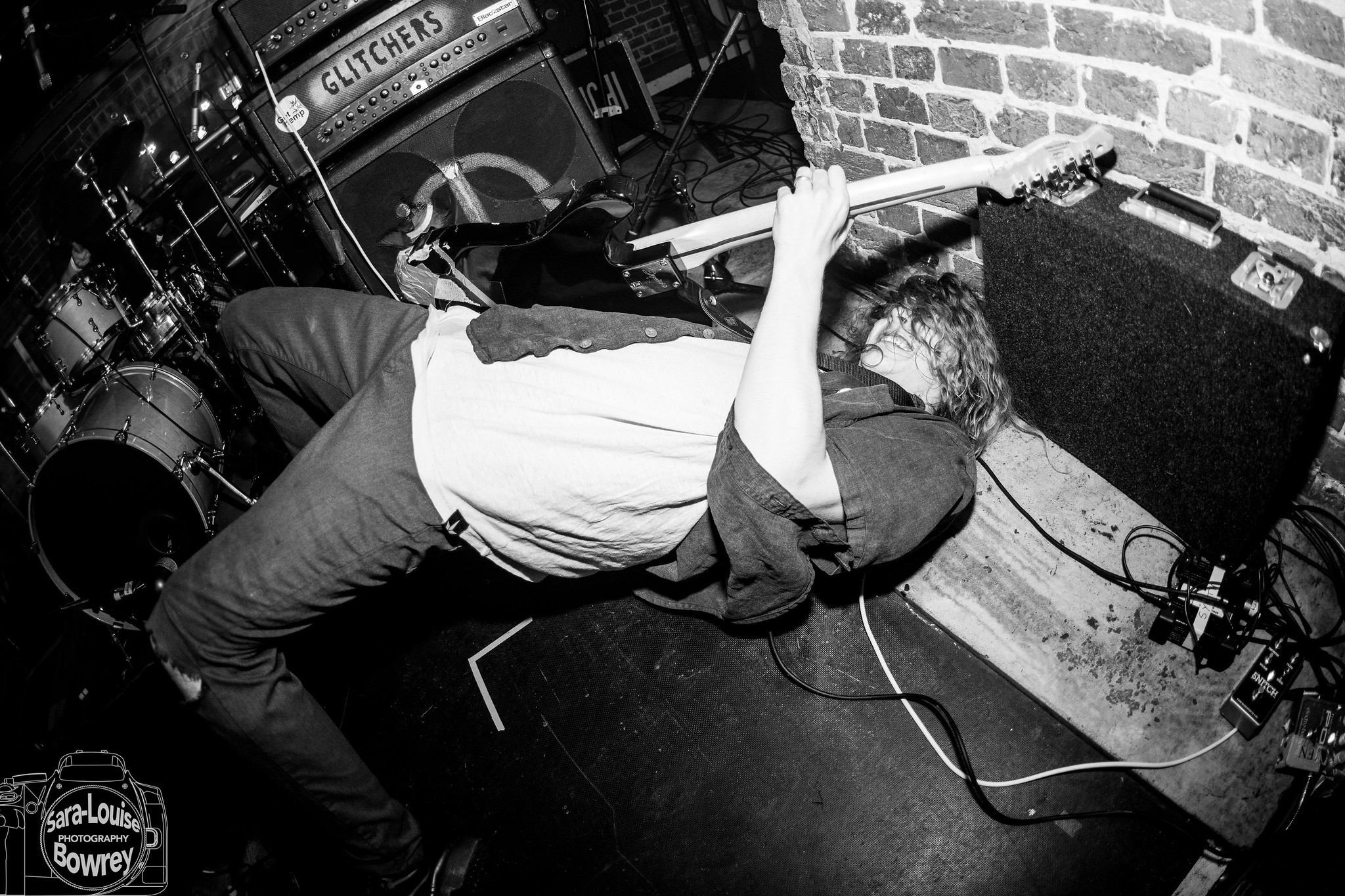 Musically it’s a proper racket, fast and furiously angry, with short sharp songs that pack in plenty of variety. Jake is a force of nature, and turns in an absolutely spellbinding performance. In terms of his seemingly boundless energy and enthusiasm, the only comparison I can sensibly make is with Pat Beers of The Schizophonics. There’s a very full-on cover of ‘Helter Skelter’, and plenty of message in their own numbers. “Your mother taught you better than that” is a clever angle for a song challenging sexual harassment. The anti-police ‘ACAB’ is understandable, given the amount of hassle the band must get from the forces of law and order whilst carrying out their usual gig itinerary. There is humour too, though. Jake is at pains to stress that ‘F*ck The Tories’ is a political stance rather than an exhortation to right-wing romance. They back up their anti-capitalist rhetoric by exchanging all their merch for “donations”, where the fans can pay what they want. 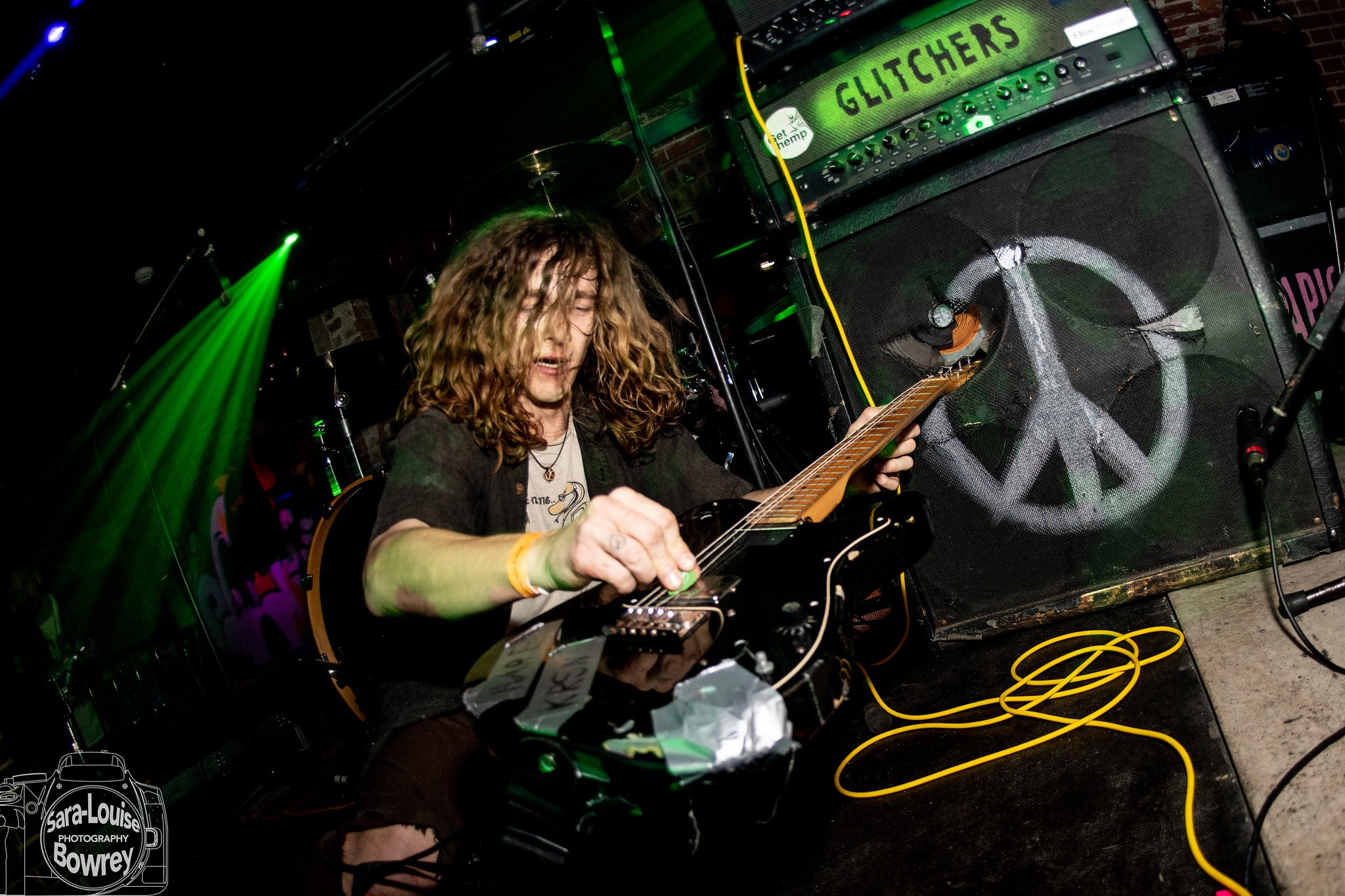 I’m very glad I came out early, as it’s been a most entertaining set. If you’re not already familiar, you can check out Glitchers online, where there are plenty of videos of them interacting with the Great British public out on the streets. 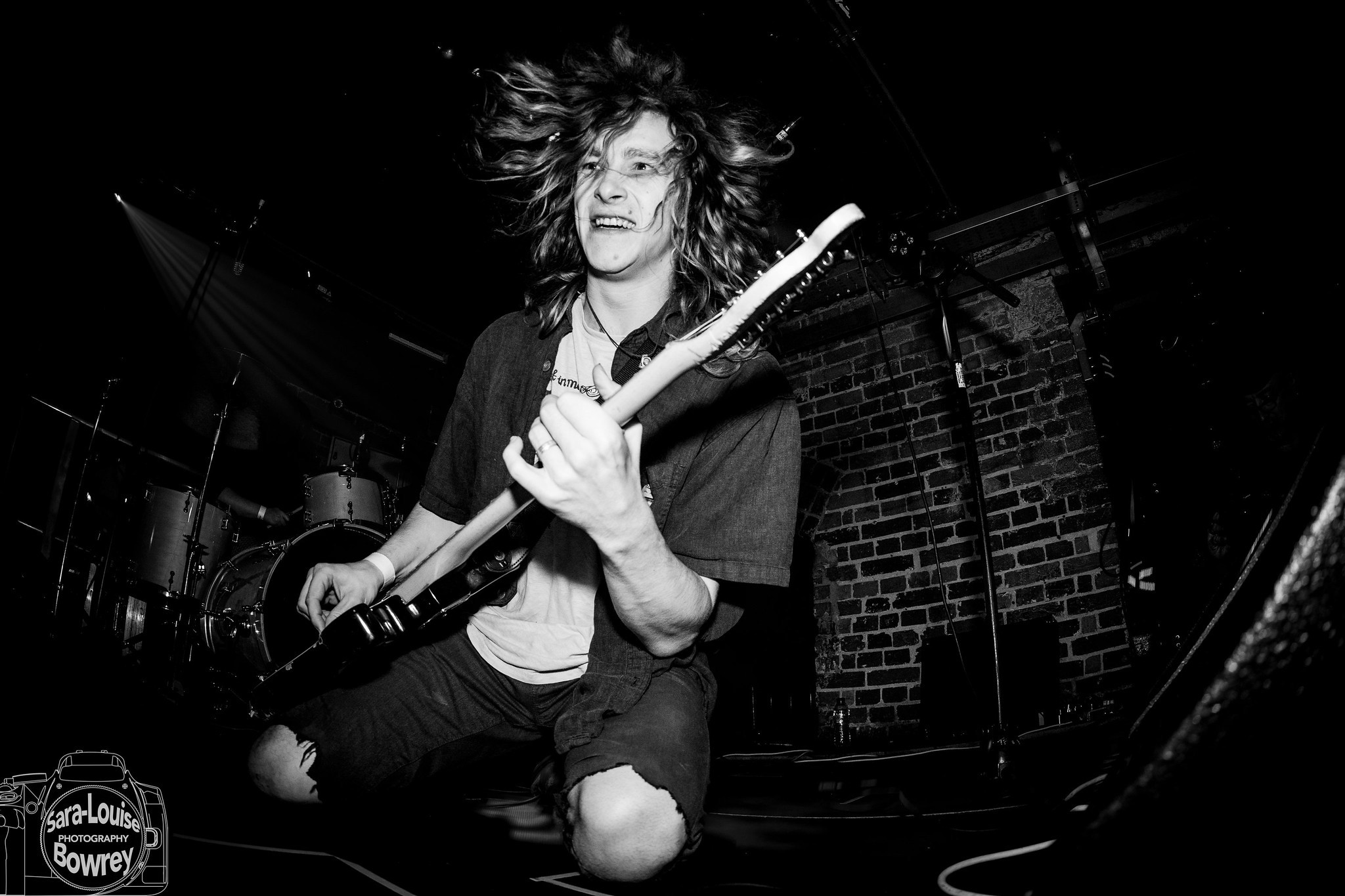 Find out more about Glitchers by visiting their ‘linktree‘. 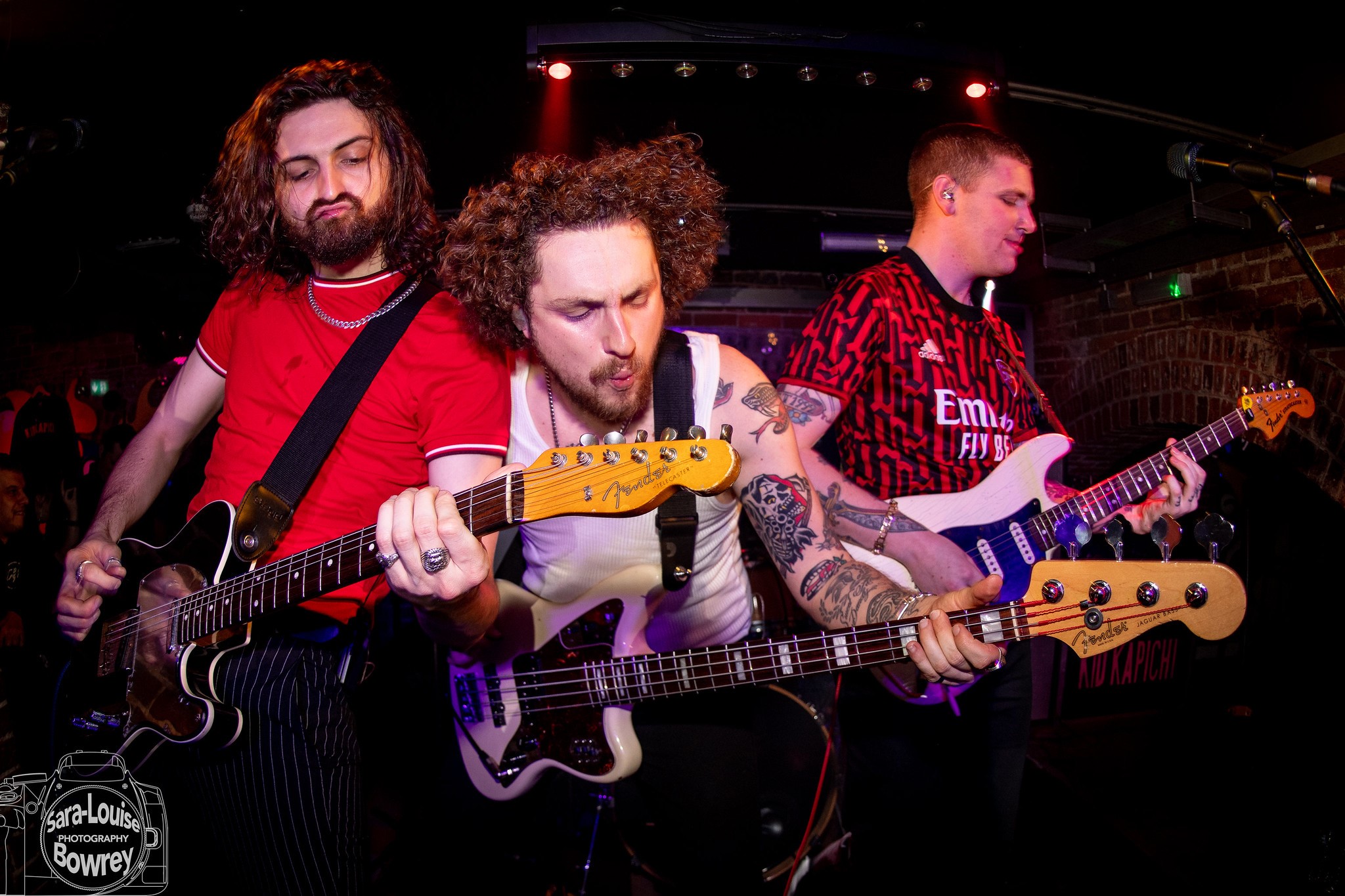 There’s a considerable buzz of anticipation down audience alley. Those who are here are ready to party. A big cheer goes up as the intro recording, a clip of dialogue from ‘Lock Stock And Two Smoking Barrels’, starts to play and Kid Kapichi appear from a mirrored door at the back of the stage. They launch into the ferocious snarl of ‘Sardines’ and everything quickly gets pretty crazy. It is immediately apparent that the two large and amiable security persons are going to need to spend the set supplying human ballast to keep the tubular barrier upright. 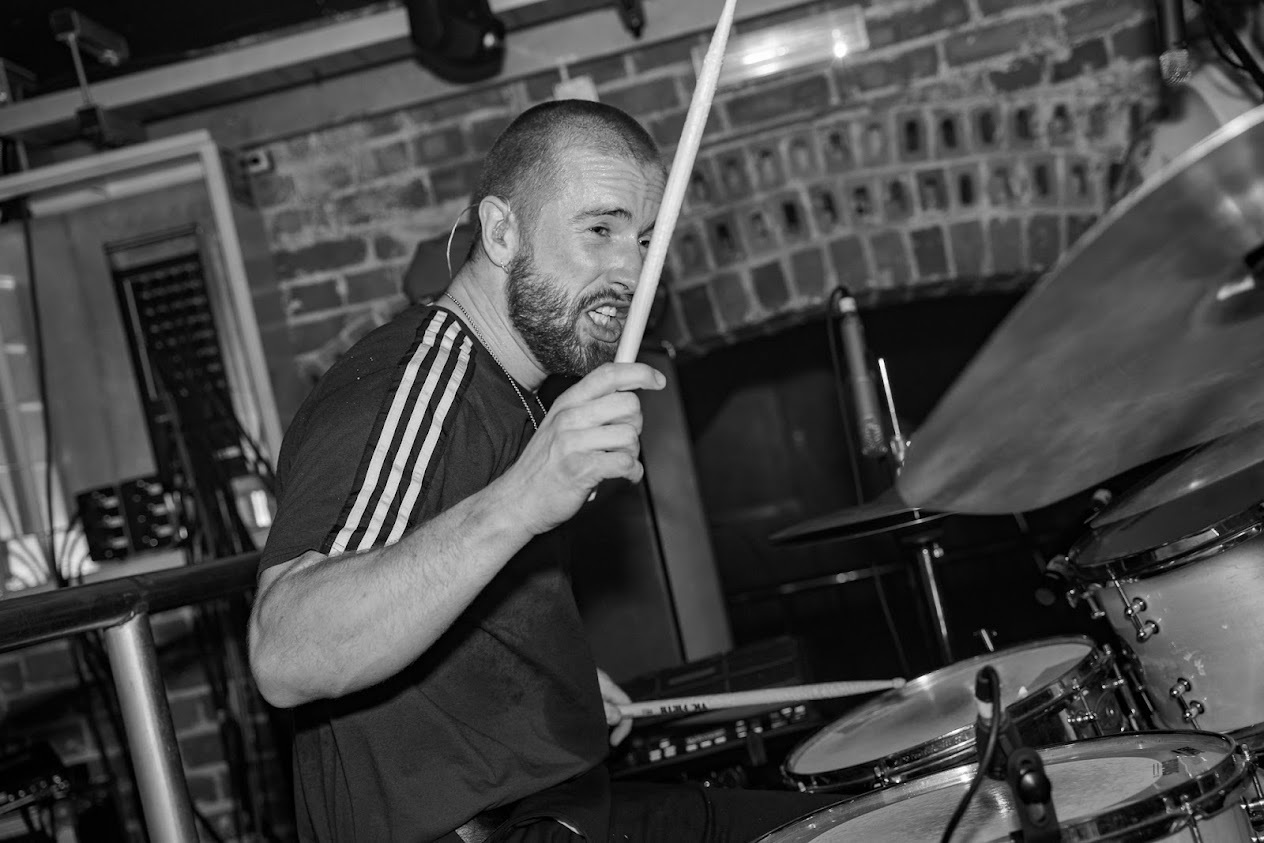 Centre stage is Jack, spitting lyrics with venom and grooving on a white Stratocaster. House left (about two feet left) is Ben, bouncing and gurning, wrangling glam-tinged howls of lead from a Tele. Bassist Eddie is making best use of the space available, popping up at either side, or in-between his fellow players. Behind the kit, George lays down a thunderous beat and launches samples via a drum pad. 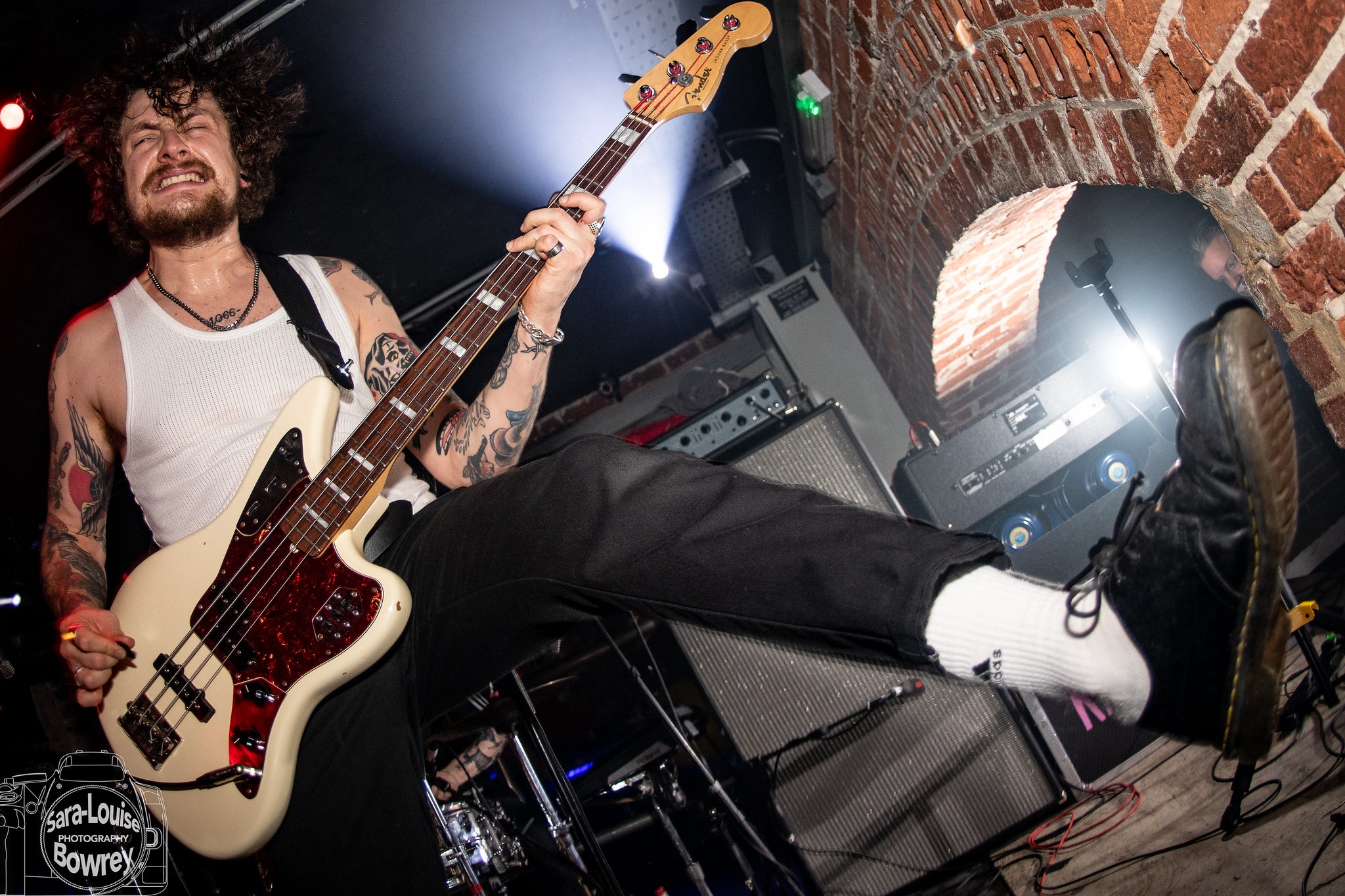 The set romps through the familiar air-punching anthems of ‘Glitterati’ and ‘Fomo Sapiens’, and the enthusiastic dancers work through a varied repertoire of bouncing, moshing, and forming circle pits. It’s Christmas, so silly cover versions are appropriate, and we get treated to a very passable rendition of ‘Rocking All Over The World’. Personally, I never tire of pointing at the band and screaming, “Thugs!”, and ‘Working Man’s Town’ has a special resonance on home turf. There’s a brief lull of relative calm during the slightly more reflective ‘2019’, before everything gets properly chaotic for the ludicrously infectious bounce of ‘Self Saboteur’. 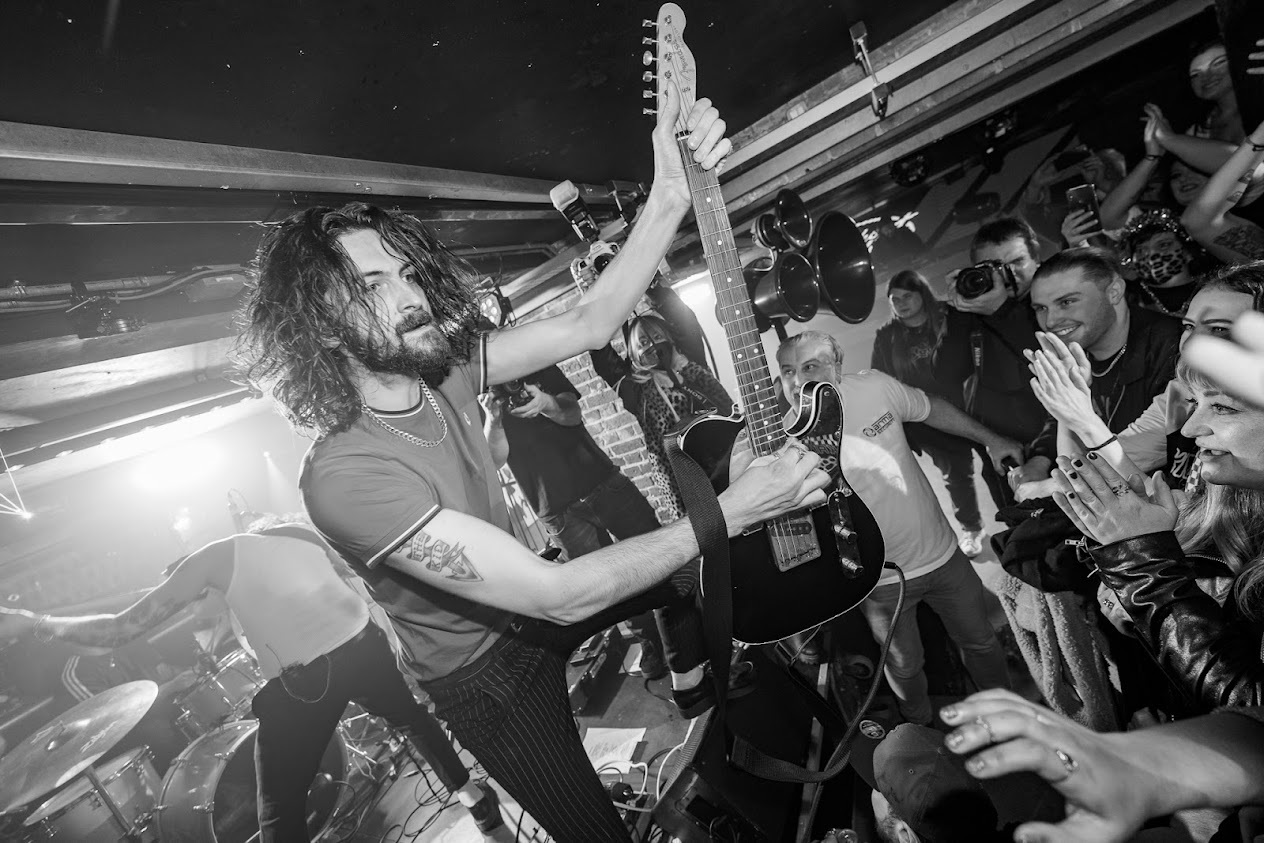 ‘Death Dips’ is particularly impressive, the swirling fairground organ samples soundtracking the whirlpool of humanity on our side of the barrier. There’s a bit of a party on stage, with the usual bottle of Buckfast Tonic Wine being passed around. A Christmas cover version is traditional at this point, and José Feliciano’s Latin classic ‘Feliz Navidad’ fills the bill nicely. 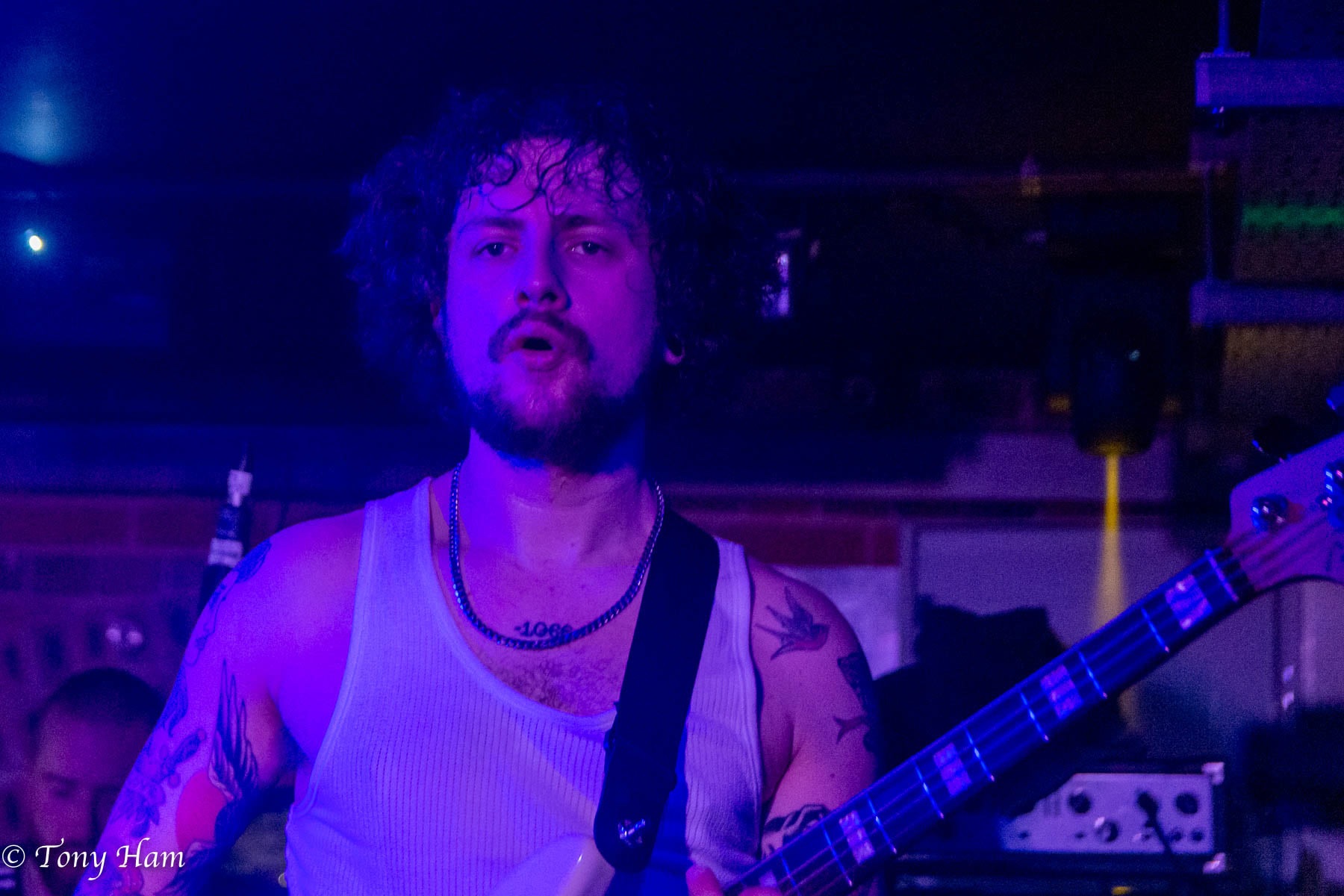 An encore is a foregone conclusion, and the siren intro to ‘Violence’ ushers in a final burst of frenetic dancing, topped off by a spectacular crowd surf down the length of the room by a shirtless young man. It’s been a rollercoaster year, with soaring highs interspersed with pandemic uncertainty and ever-changing restrictions, and it looks like the ride will continue for a while longer yet. Whatever the coming year brings, please accept our best wishes of the season from the Brighton and Hove News team, deep in the mosh-pits of Hastings. 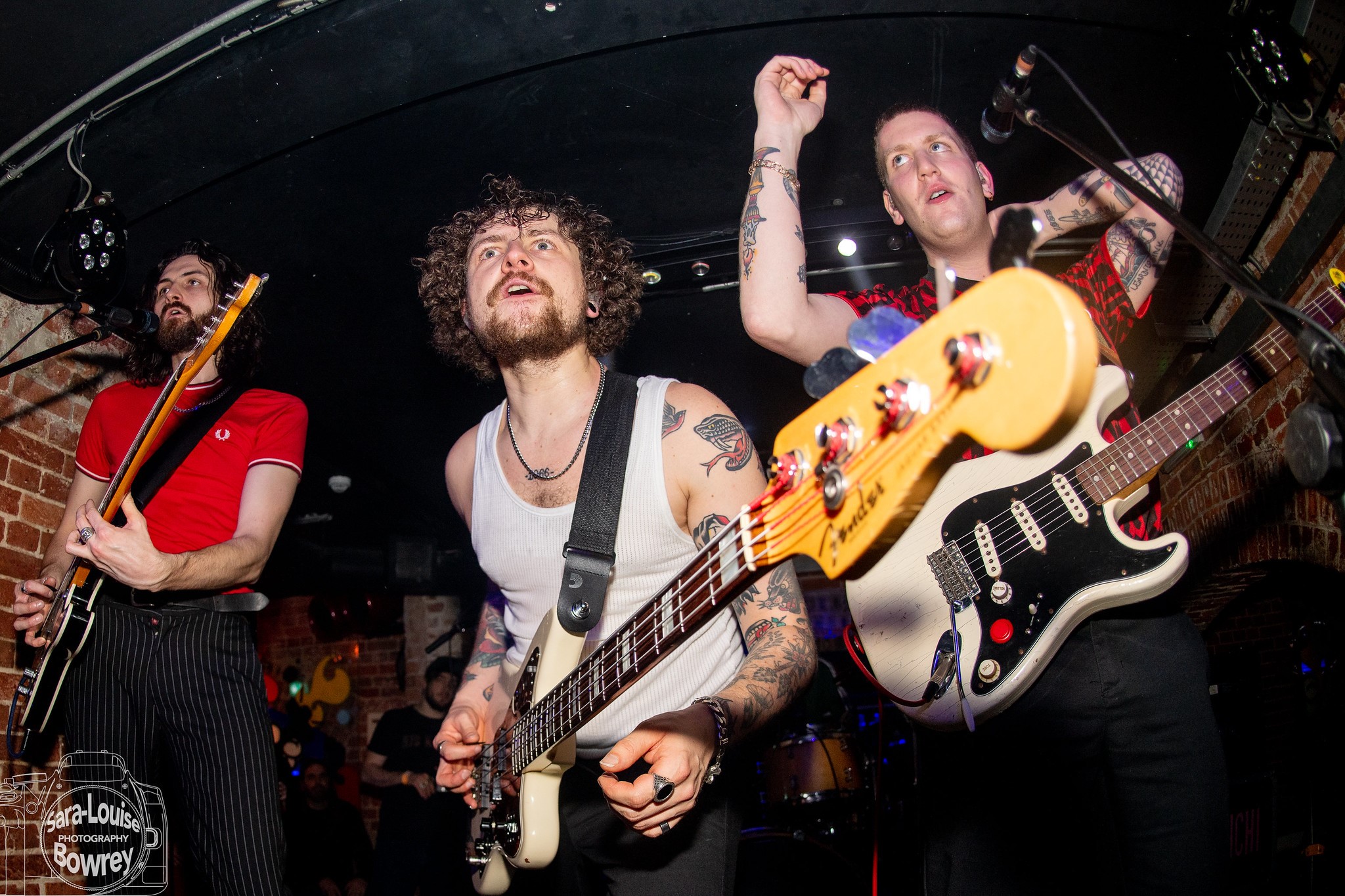 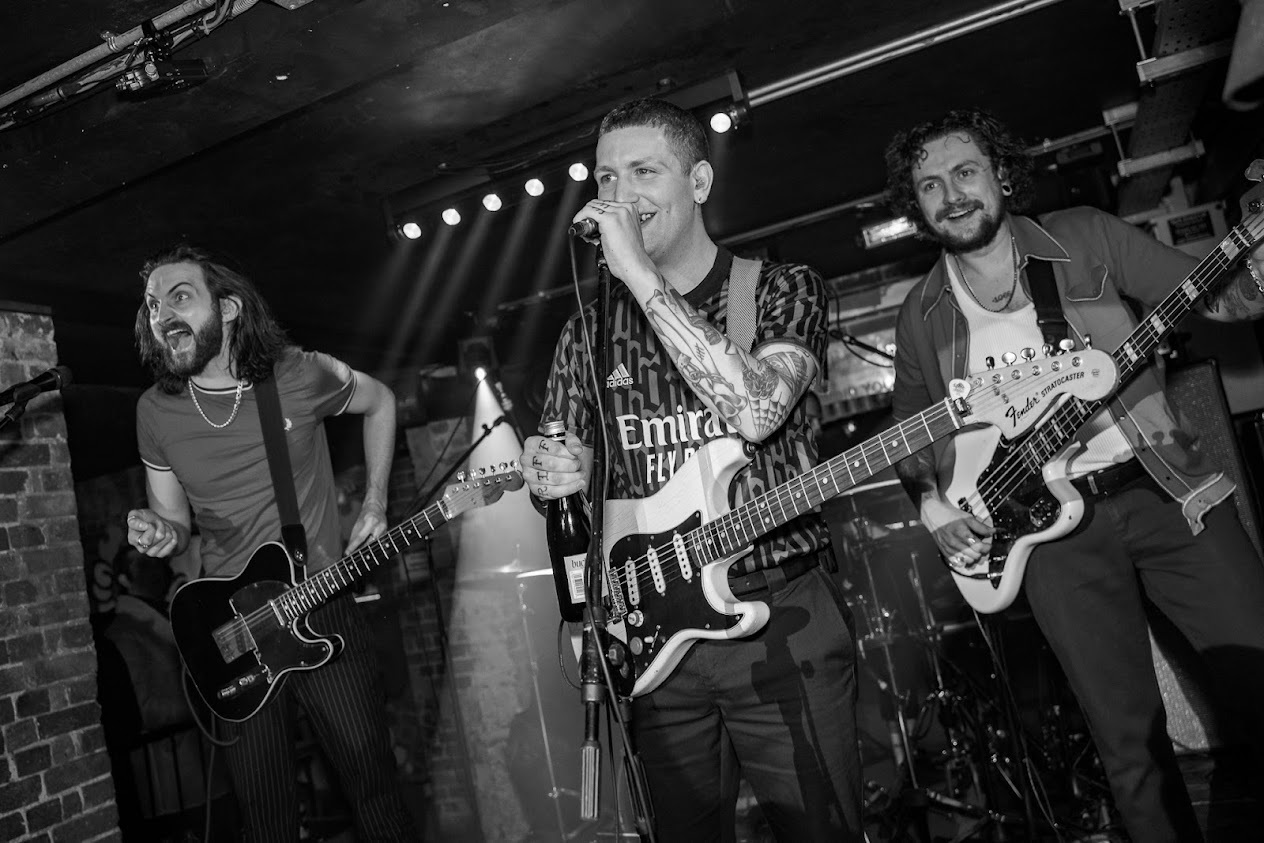 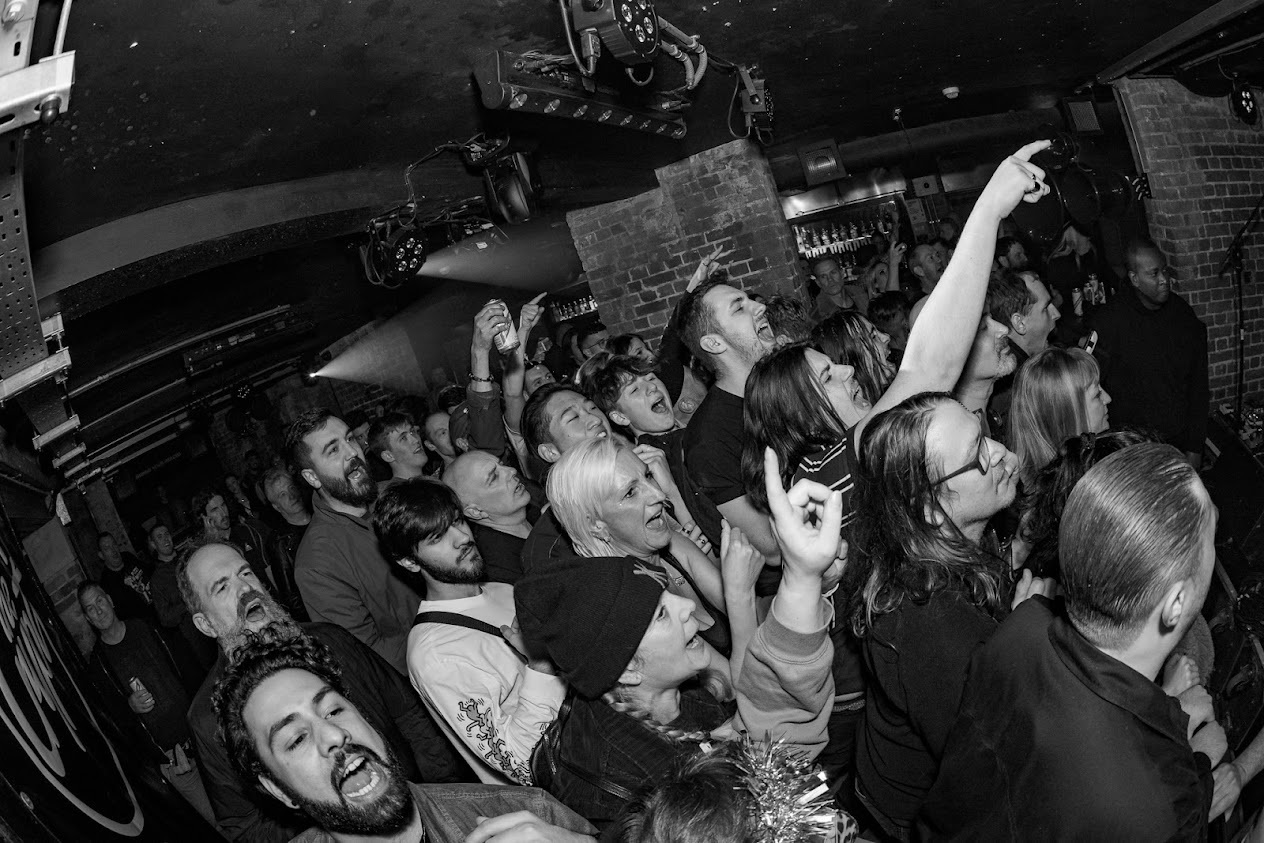 The audience at The Crypt, Hastings 21.12.21 (pic Cris Watkins/PunkInFocus) (click pic to enlarge) 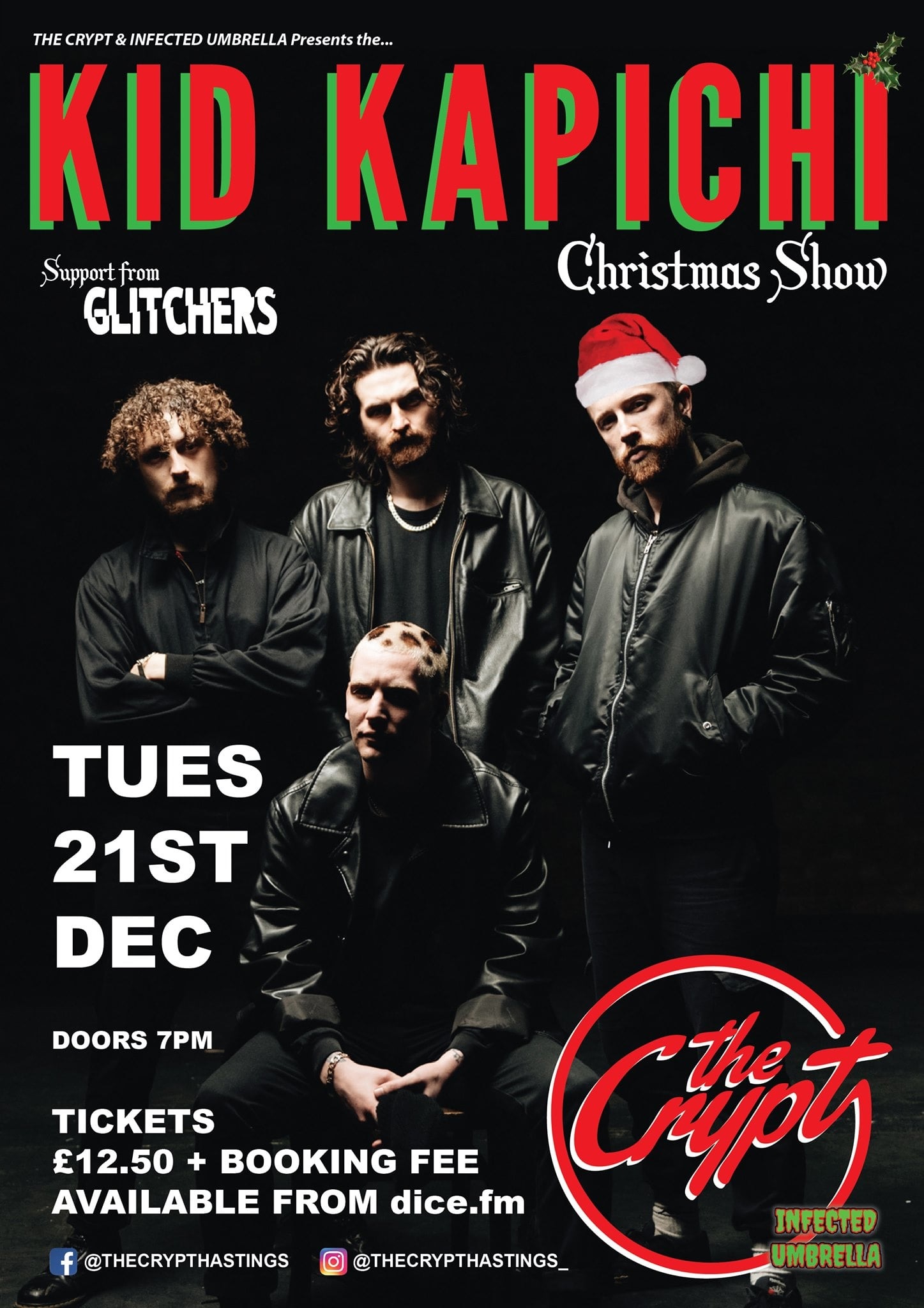