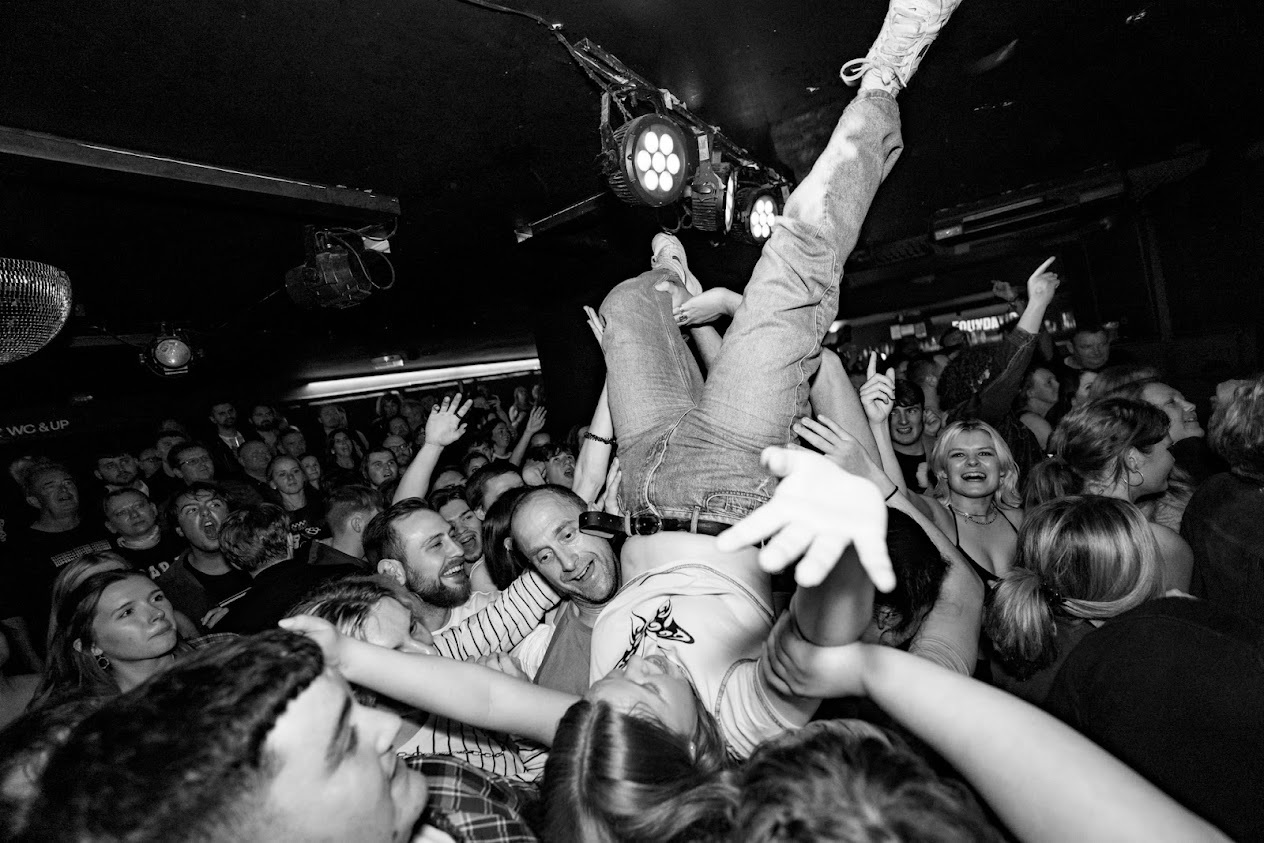 Hastings four-piece Kid Kapichi are very much a band on the rise. Playing glam-tinged contemporary rock with punk attitude, often expressed through angry, agit-pop lyrics, their energetic sound has found a broader audience since the release of debut album ‘This Time Next Year’ back in February. Postponed until autumn due to pandemic restrictions, the accompanying ‘Big Sexy Tour’ has been a roaring success, with sold out dates up and down the country, including The Scala in London. Brighton is the final night, and there is a considerable amount of excitement in anticipation of tonight’s show. 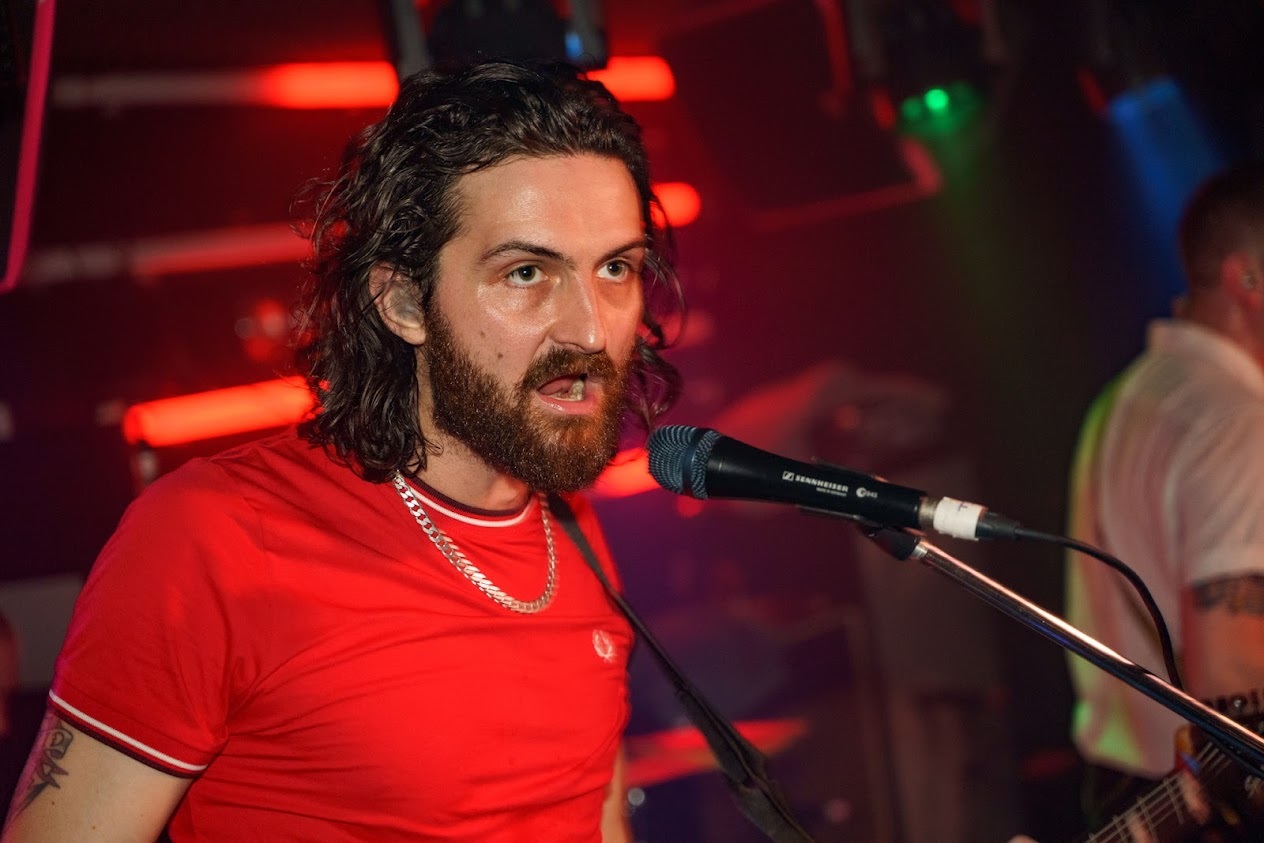 Arriving at Patterns on the seafront at 7pm, the first thing I notice is an impressive queue round the corner and down the street. Both support acts tonight are local, and everyone wants to be in at the start. Inside, the basement room has black walls and a nightclub vibe, with brightly coloured tubes running behind the stage. The audience area is tiered, like an amphitheatre, giving good sightlines from most spots if you can avoid the hefty pillars holding up the roof. There are some air conditioning units, though I suspect they’ll have their work cut out keeping us cool tonight. 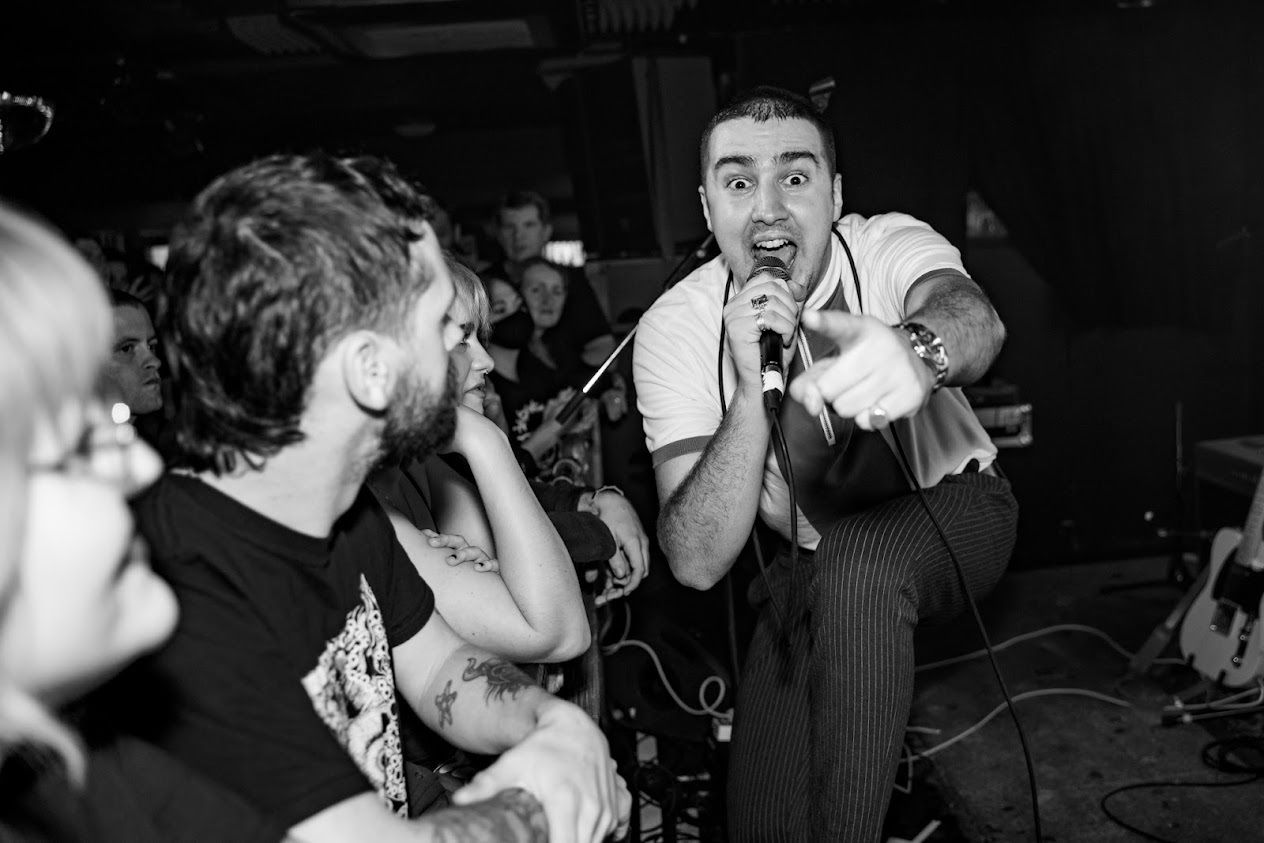 First up are SNAYX, a punk rock duo from Seaford, whose local popularity is confirmed by the large and enthusiastic crowd that has gathered ready for their 7.15pm set time. The contrast between the disco froth of their intro music, ‘We Like To Party’ by Vengaboys, and the menacing bass growl of opening number ‘Drill’ is extreme, to say the least. Lead vocalist Charlie Herridge, a tall figure in a funnel necked Fred Perry cycling top, bounds across the stage, whipping up the audience. Ollie Horner is on bass, a striking crop-haired figure with a mesmeric snake-eyed stare. His white Fred Perry is straining to contain a shifting pack of tattooed muscle, as he bounces around firing off volleys of high leg kicks. His pick grinds at a white Fender Jaguar to produce a monstrously vast sound via a complex route through a huge board of effects pedals. Touring drummer Josh completes the line-up, punctuating the bass throb with fast tight snare rolls and tumbling tom fills. 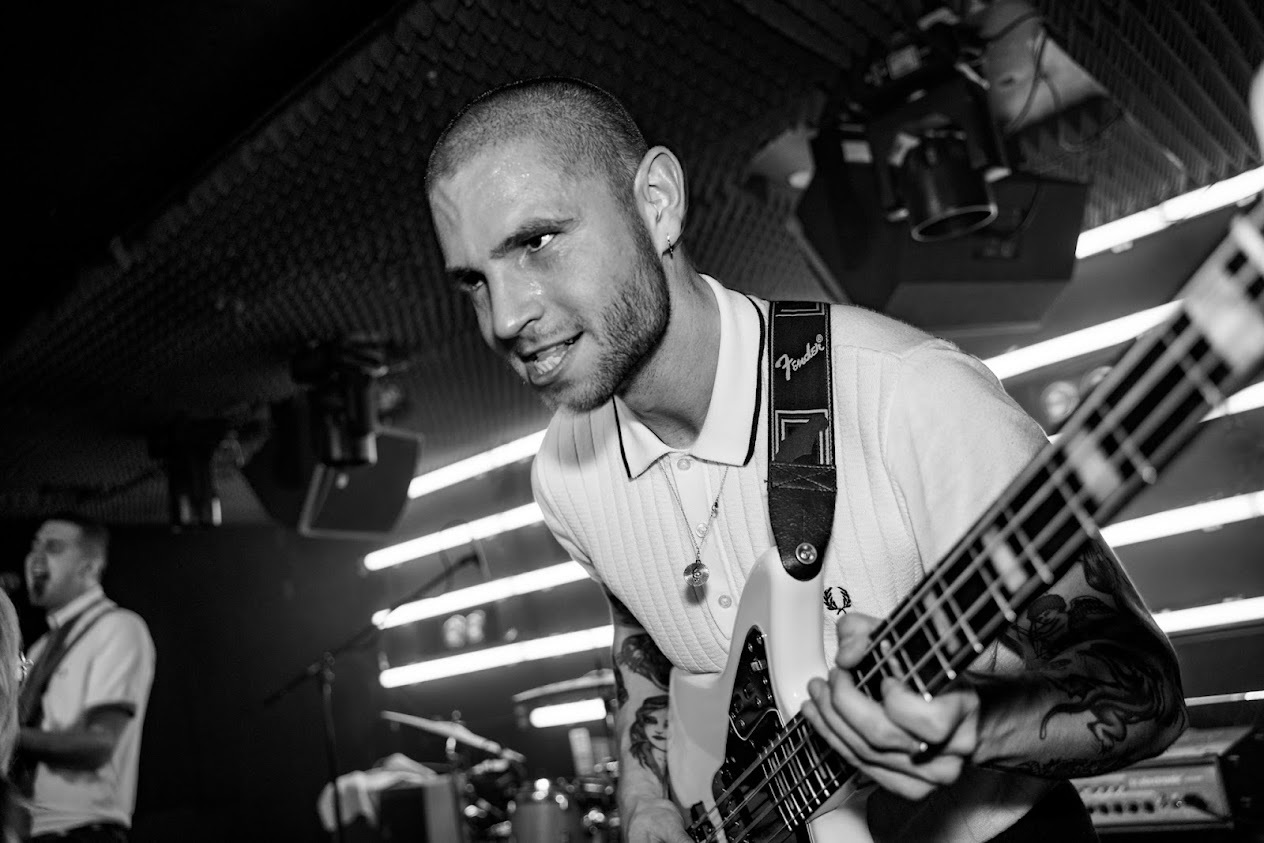 Charlie straps on a guitar to embellish the insistent groove of single ‘Body Language’, and the excited crowd are chanting along with the vocal hook. ‘Deranged’, also a single, is a superbly catchy song with an infectious urgency. ‘Cigarette’ motors along, driven by a manically busy bass line and nicely augmented by additional samples, and there’s an effective trading of bass and guitar riffs in current single ‘False Friends’. 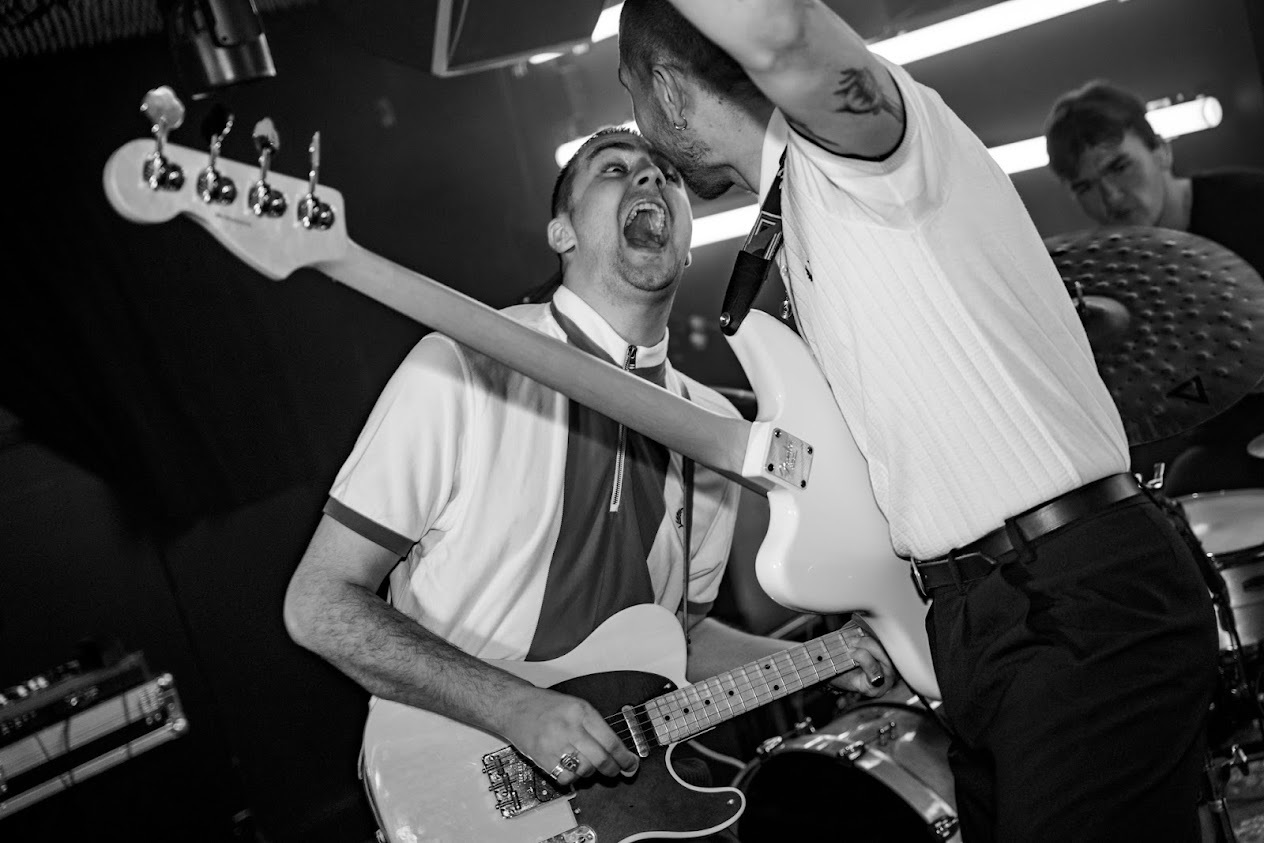 Once the preserve of monks and Scottish alcoholics, Buckfast Tonic Wine is currently enjoying a surge of popularity amongst the younger rock crowd. High caffeine content, combined with its sickly sweet taste and obvious intoxicant properties, make it fuel of choice for headliners and support alike. SNAYX have a song about it, called ‘Buck’, which is naturally performed with Charlie swigging from a bottle of the stuff. Introducing ‘Work’, he asks a few of the front row for their occupation. The third answer is “banker”, which fits nicely with the lyric’s tale of Charlie’s meeting with an unsympathetic bank manager. 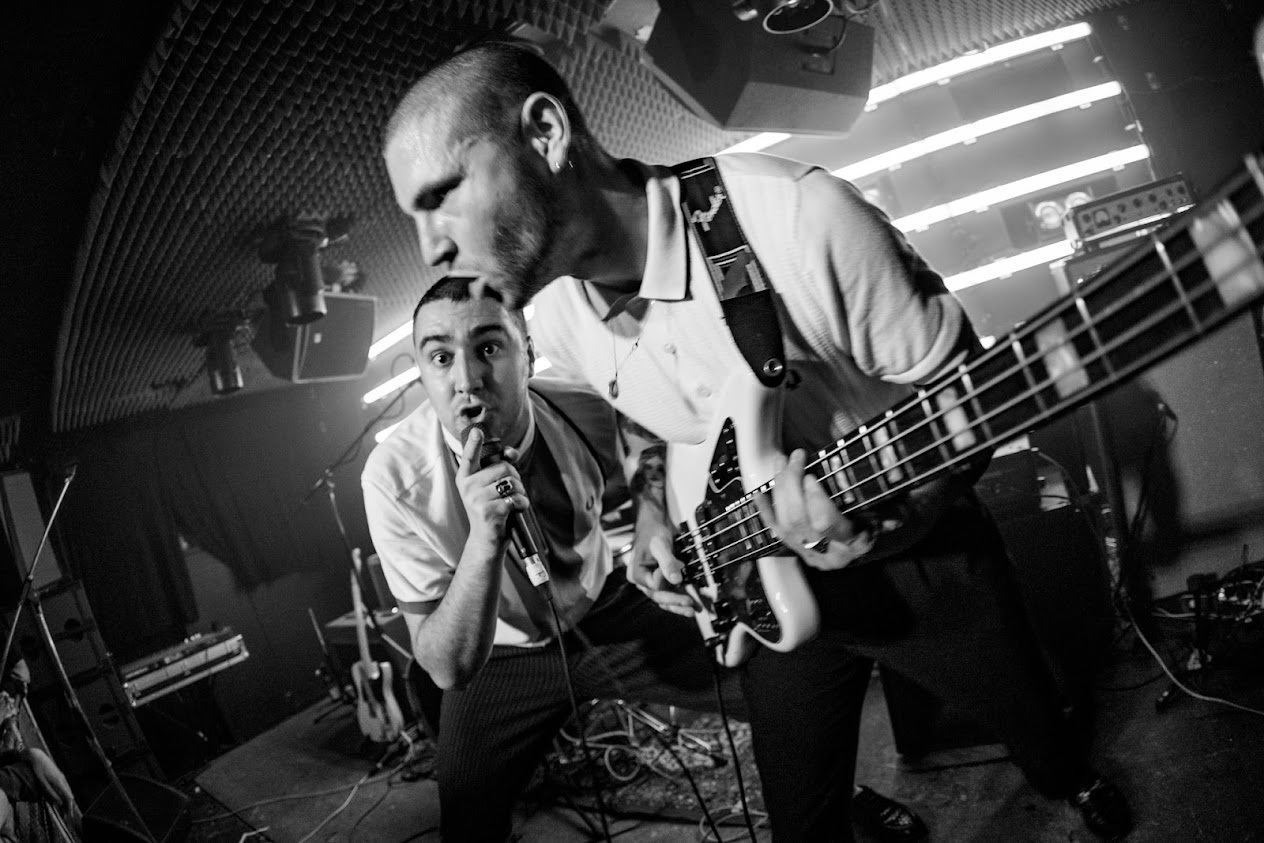 The whole set has been an explosion of ferocious energy, but it still needs a climax. For ‘FAYX’, the already lively and vigorous mosh is supplemented by the arrival of Charlie, who is over the barrier and into the heaving crowd. For a warm up act, things are getting pretty heated. The conclusion is an excellent cover of Slowthai’s ‘Doorman’. This has been an outstanding opening set, and I can’t imagine it’ll be too long before SNAYX are headlining tours in their own right. 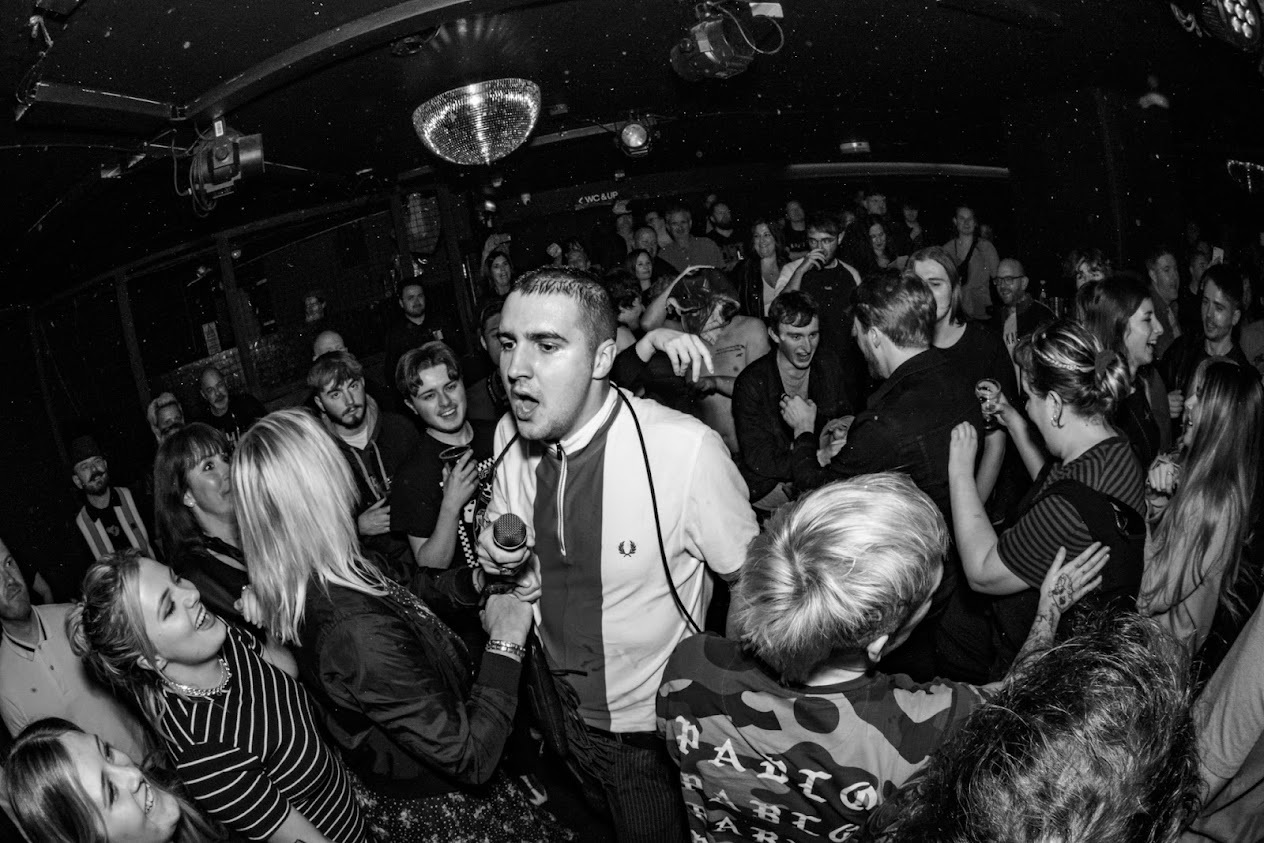 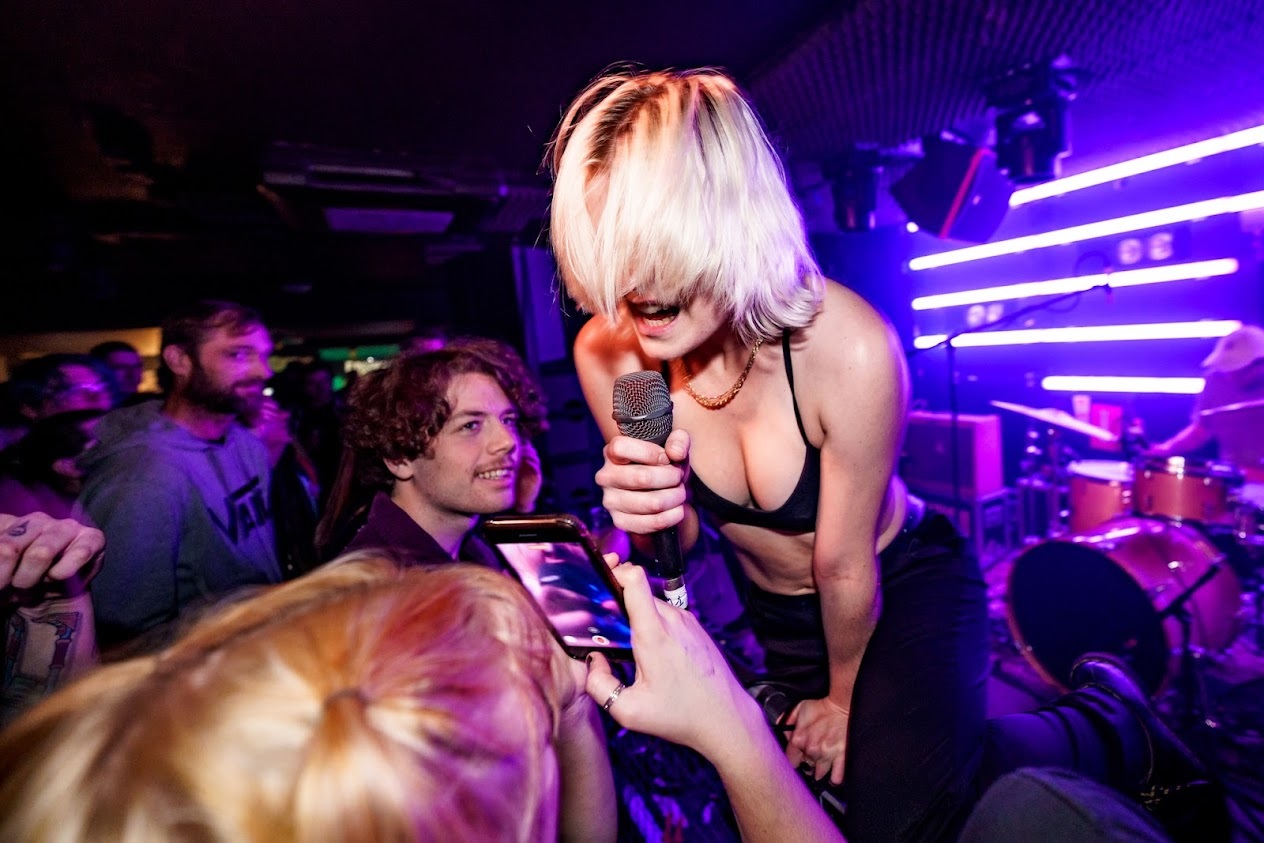 Next up this evening are another local band, Projector. The Brighton three-piece play alt rock with a vibe reminiscent of acts like My Bloody Valentine, Sonic Youth and The Pixies. Vocals are shared between Edward Ensbury on guitar and Lucy Sheehan on bass, although the latter seems to command most attention. Lucy appears elegant and sophisticated in a black suit, but a very road-worn Jaguar bass hints at the possibility of some serious rocking out. Indeed, after a steady build during opener ‘Love’ she unleashes a piercing and passionate scream. Edward sports a faintly arty look, with a stubbly beard and white shirt, and begins the set on a Telecaster with a camo finish. Behind the kit, Cal Marinho lays down a heavy beat interspersed with nicely languid fills. His comfortable sportswear looks ironically kitsch. 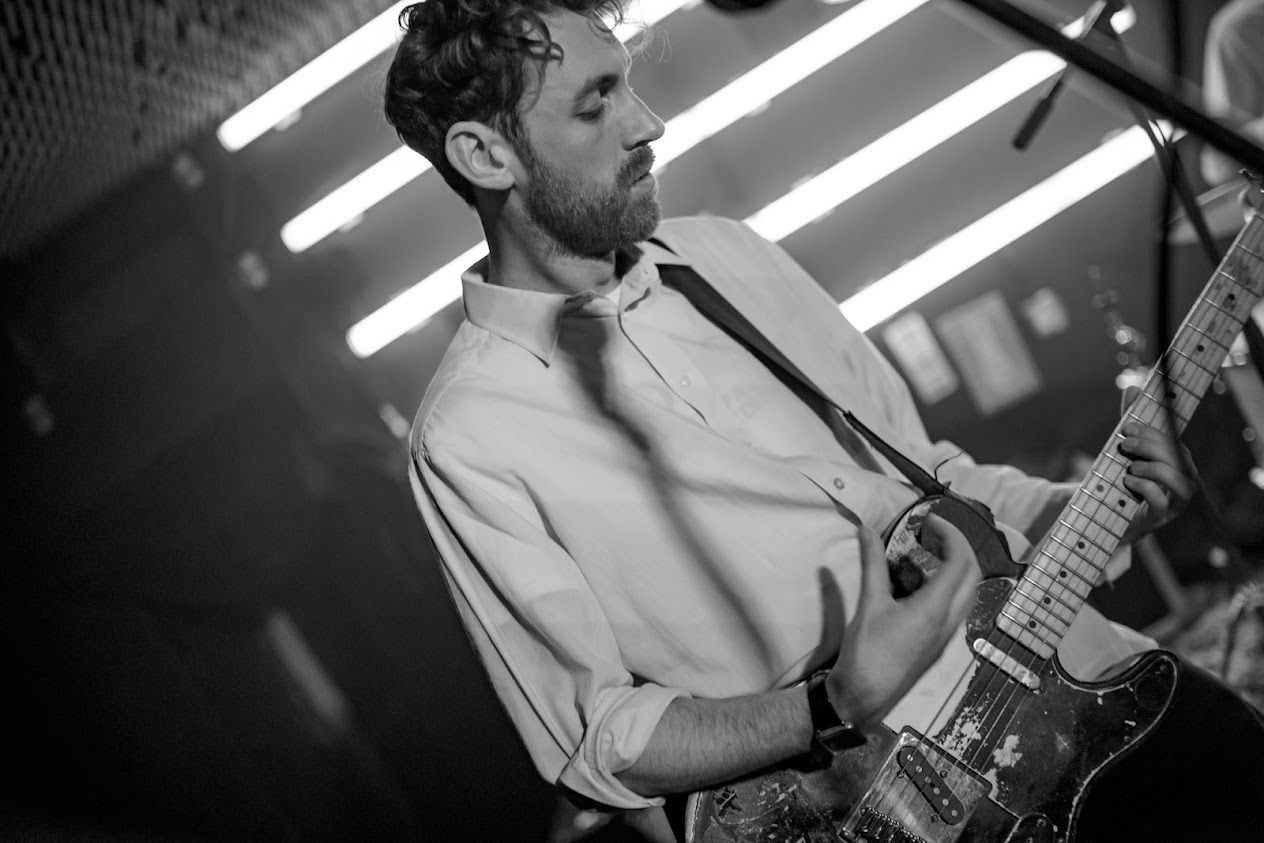 After an atmospheric introduction, ’Full Circle’ progresses to a satisfying wig out, with Lucy playing the bass above her head. There’s a strong hint of Nirvana in the vocal line of ‘Break Your Own Heart’ which is also notable for a blistering guitar solo with an interesting sustained vibrato effect. For ‘Someone Calling’, from their recent ‘Zero’ EP, the band are joined on keyboards by the tall figure of producer Ben Hampson. 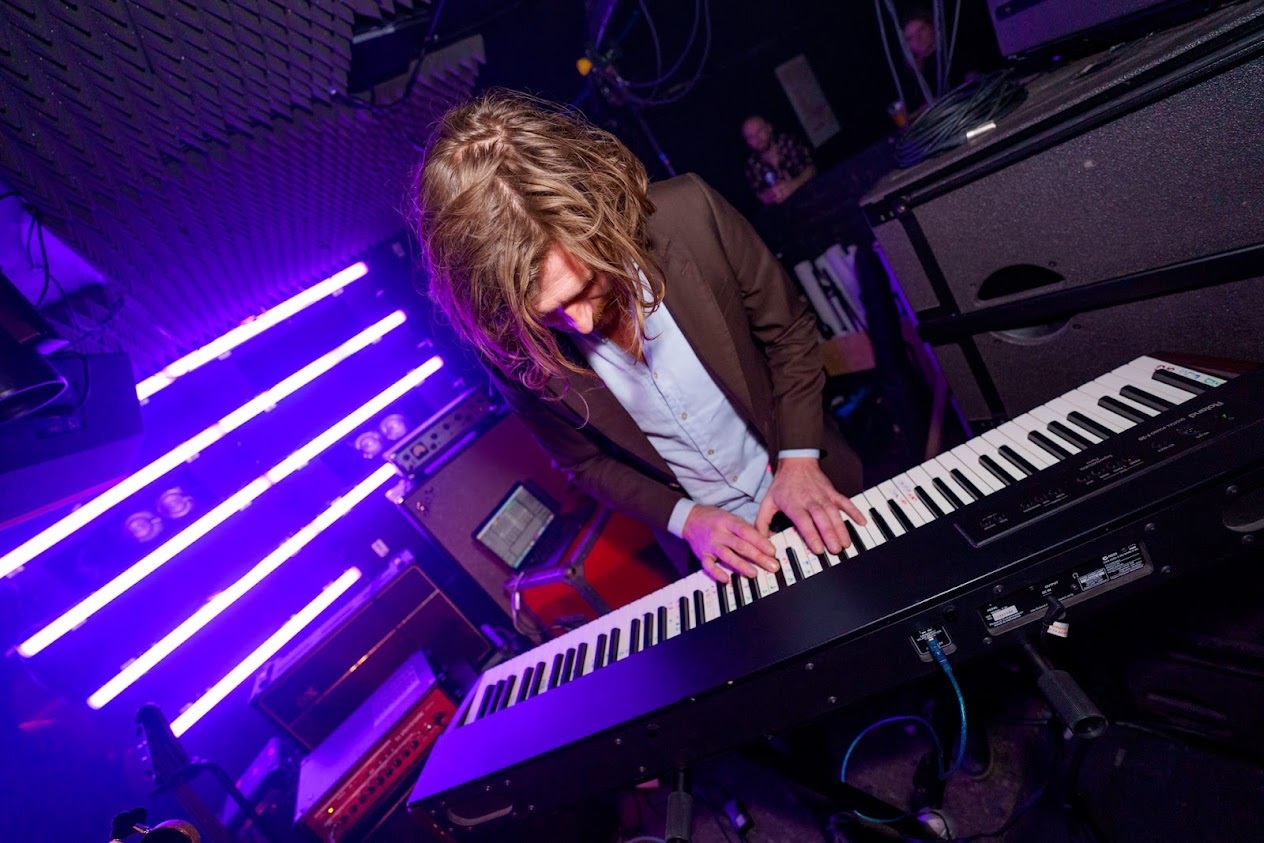 It’s getting warm and pretty lively in the room, and Lucy’s suit jacket is discarded for ‘Feels Like Something’, whose howling riff is broken by a flurry of impressive drum breaks leading to a soaringly majestic playout. The influence of The Pixies is confirmed by the inclusion of a cover of ‘Tame’. Ben straps on the bass, and Edward takes the lead vocal, leaving Lucy to concentrate on hanging over the crash barrier screaming into the crowd. In her sports bra, with blonde hair flopping over her contorted face, she bears more than a passing resemblance to Amy Taylor from Amyl And The Sniffers. 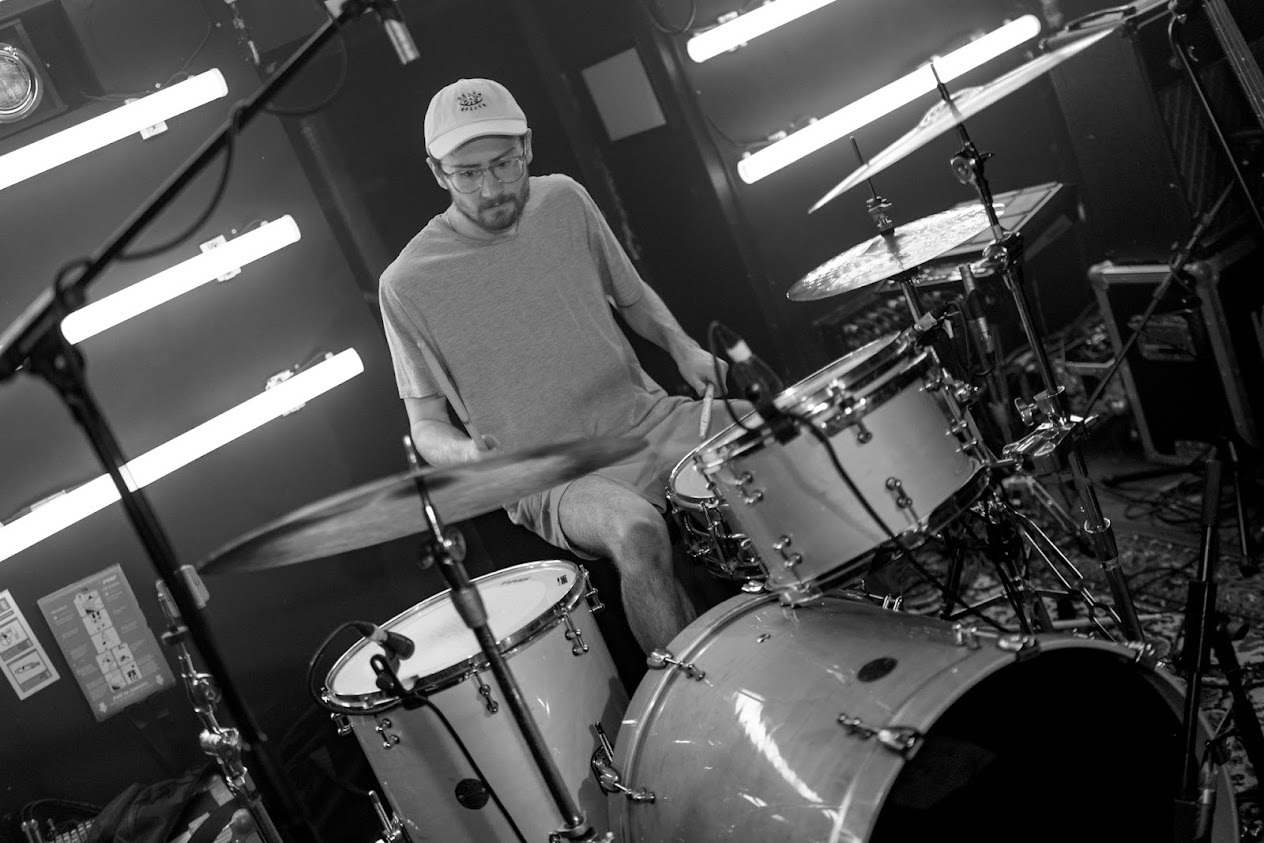 ‘Same Dream’ is calmer and hauntingly catchy, with Edward’s vocal laid over a steadier and more minimal bass and drum groove. Set closer ‘ZERO’ is a satisfying crescendo of noise and movement that culminates with Lucy over the barrier and surfing the crowd. It’s been another exemplary performance on an absolutely superb bill. 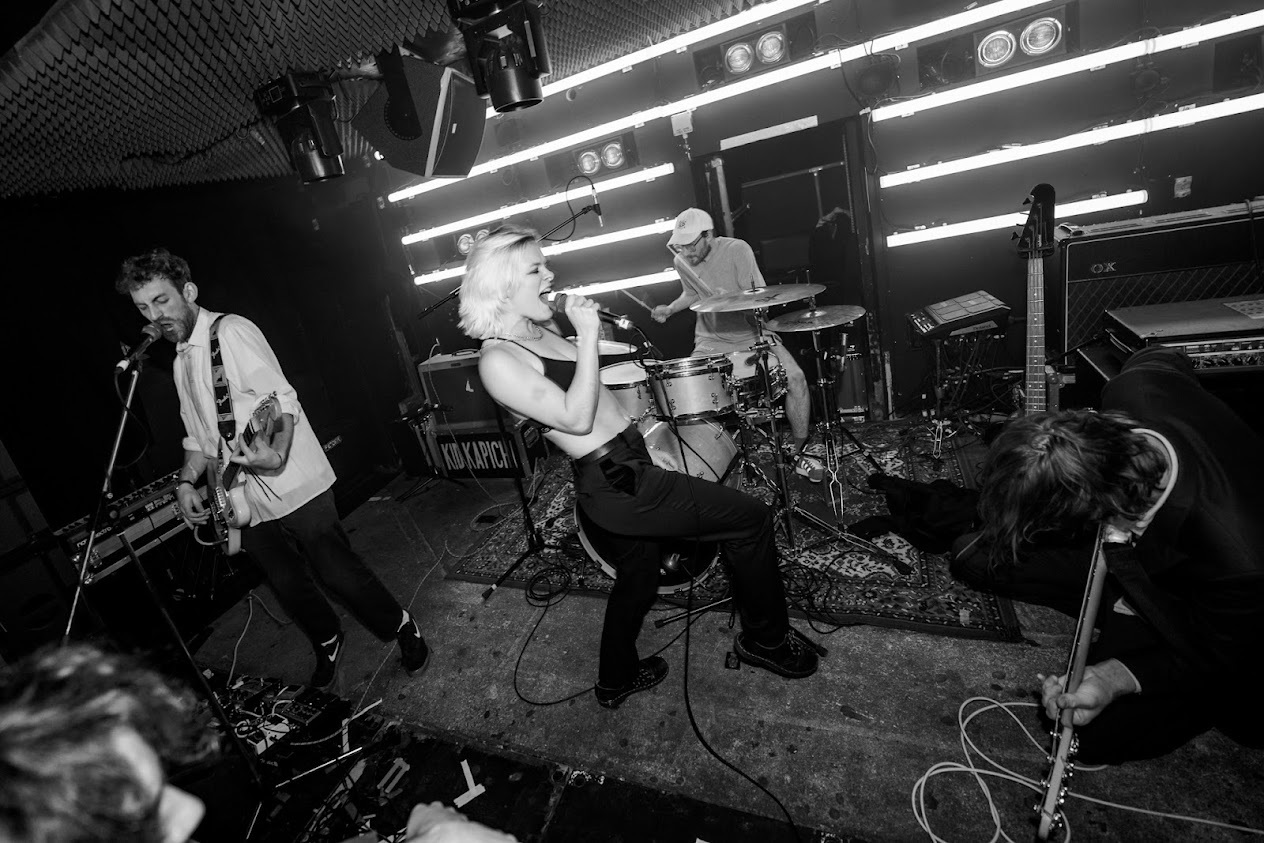 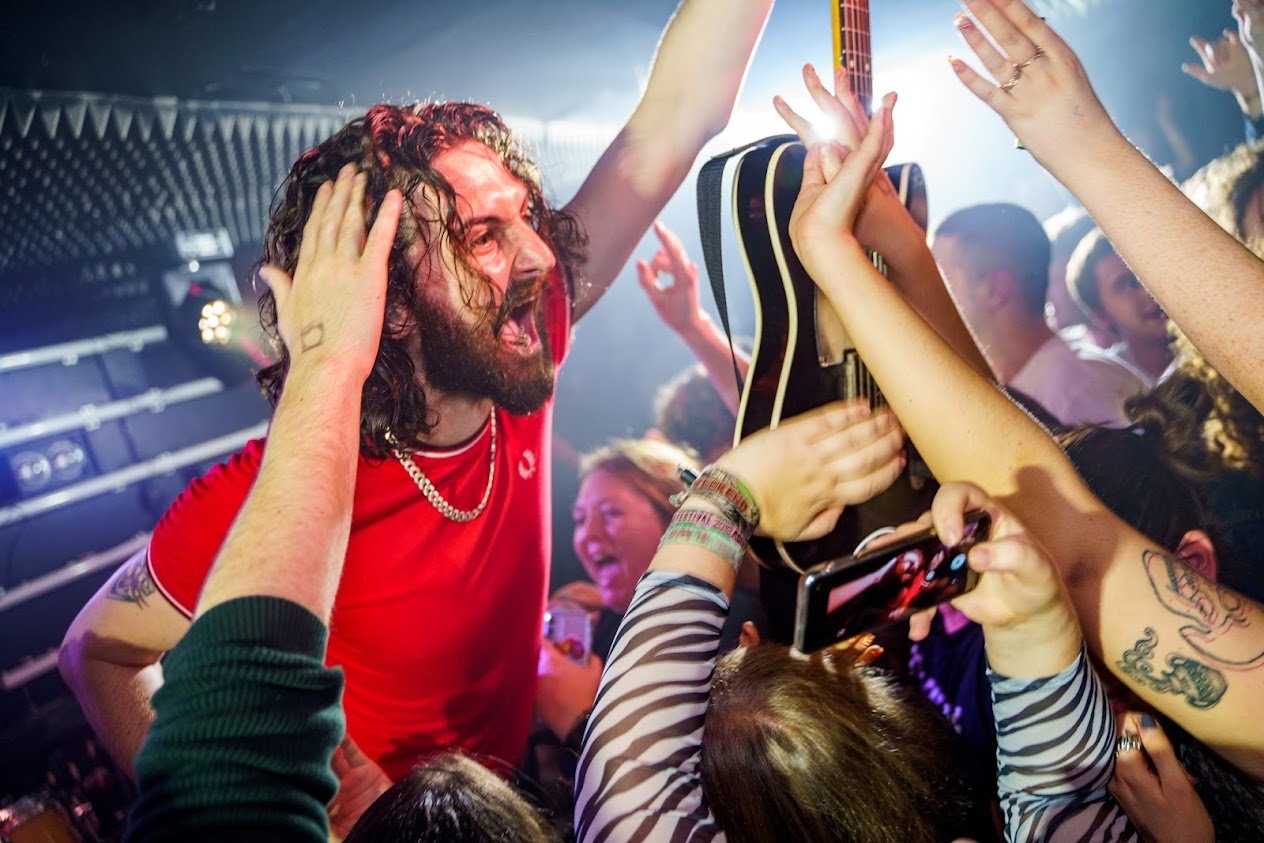 The room is now packed, and there’s an atmosphere of buzzing excitement in anticipation of the headliners. A section of the crowd has got some chanting going. The ‘spaghetti western’ intro music gives way to a sample of the “Could everyone stop getting shot?” dialogue from ‘Lock, Stock And Two Smoking Barrels’. Kid Kapichi launch into their blistering opener ‘Sardines’, and everything gets very lively and very chaotic, onstage and off. 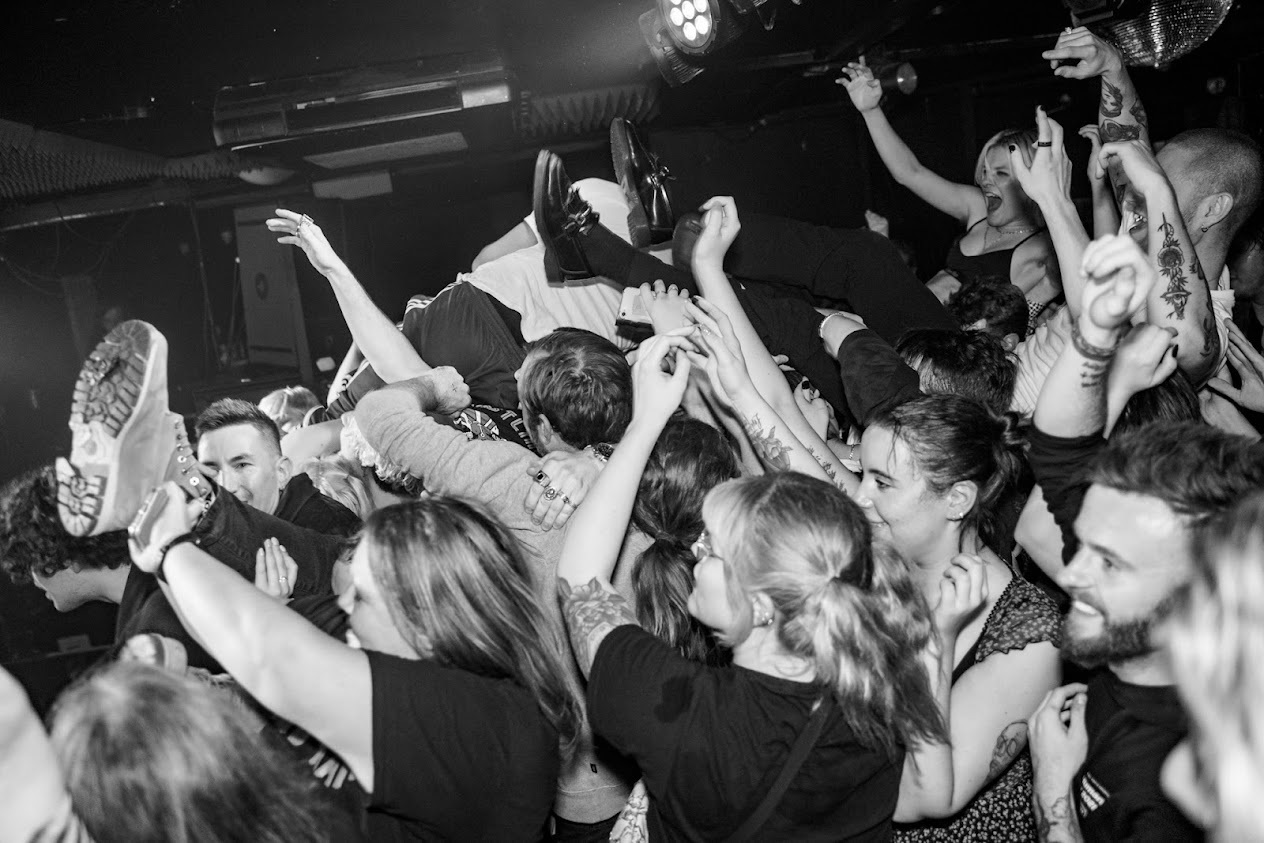 “You’re angry and you don’t know why,” snarls Jack centre stage, looking cool with white shirt, white hair, white Strat. He is flanked by bouncing bearded bandmates Ben (red shirt, black Telecaster) and Eddie (black shirt, white Jaguar bass), both careering crazily around the cramped stage. The crew spent ages getting everything just so, but have neglected one final rockstar touch. A nimble stagehand demonstrates commendable agility weaving amongst his fast-moving charges to distribute a little black towel to each player. 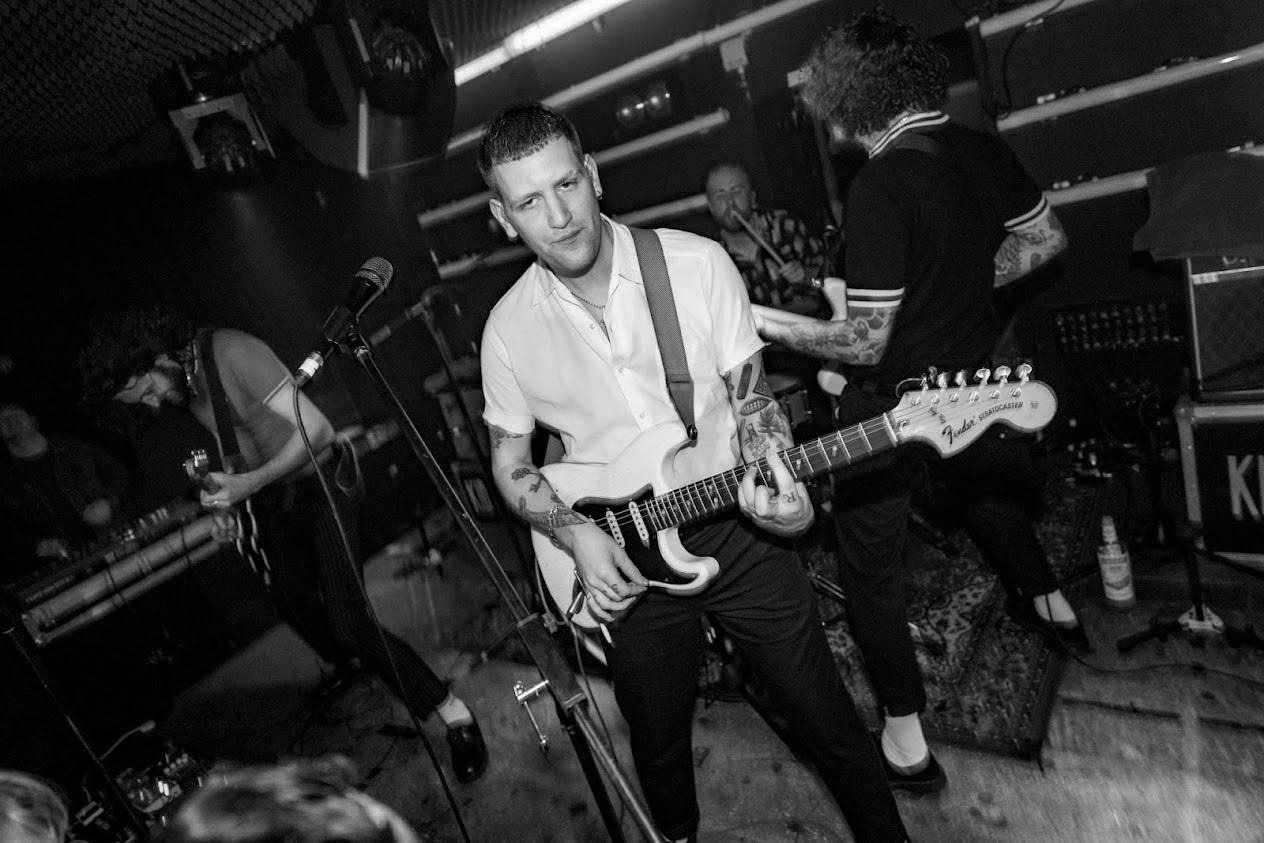 Drummer George gets busy laying down the beat for ‘Revolver’, with plenty of little shuffling fills and quick triplet rolls, and everything gets properly crazy for ‘Glitterati’, a tremendous glam racket of a song, which unleashes a frenzy of dancing, moshing and crowd surfing. The mayhem continues with the huge hooks and riffs of ‘Fomo Sapiens’, with the stagehand back in action supporting Jack’s collapsing mic stand. 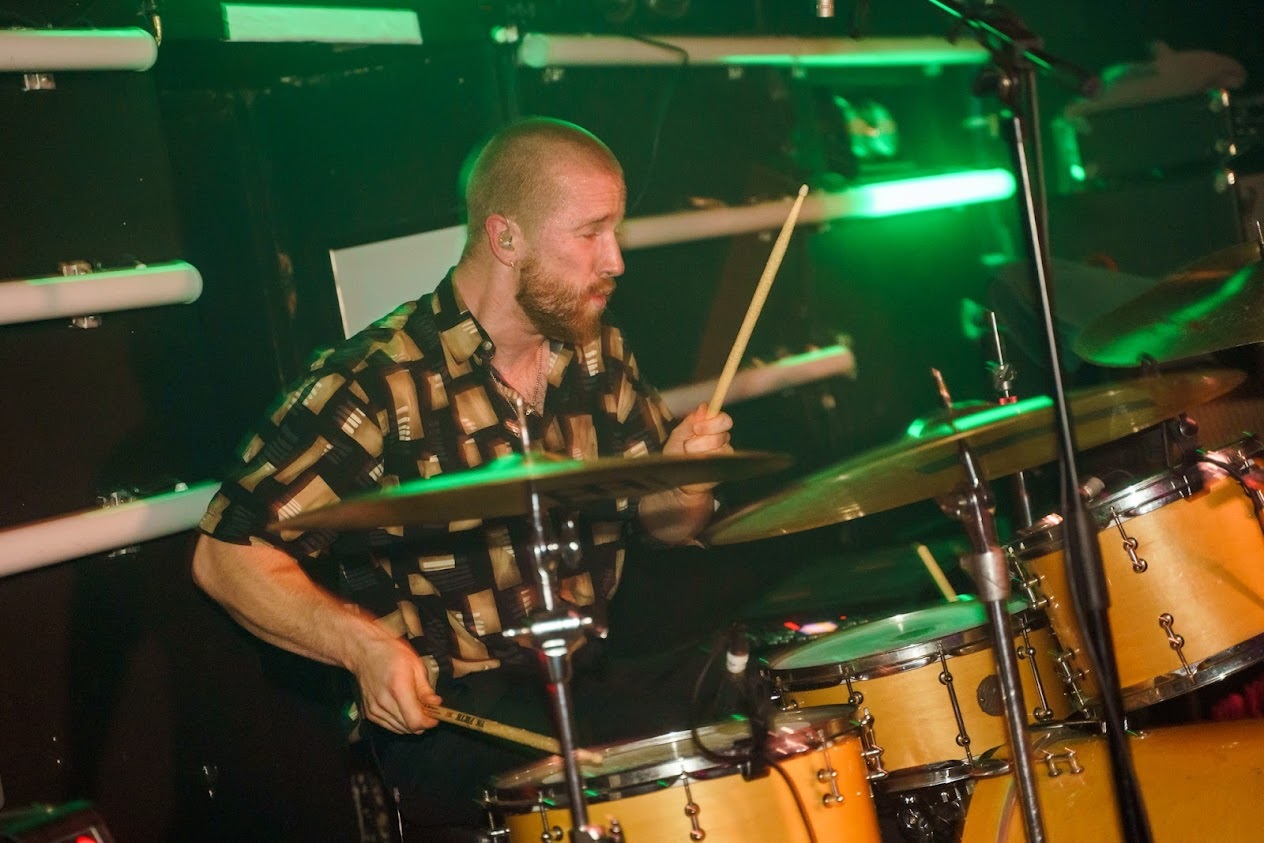 The Kid Kapichi canon includes some seriously good songs, and like many others I’m enjoying pointing at the band and screaming “Thugs!” in the manner of the aggrieved citizens of the song’s promo video. ‘Working Man’s Town’ is an absolute banger, with an urgent wailing riff and a lyric that seems to resonate with the current times: “Prices go up, wages go down… That’s how it works in a working man’s town.” The audience is busy generating some serious kinetic energy. 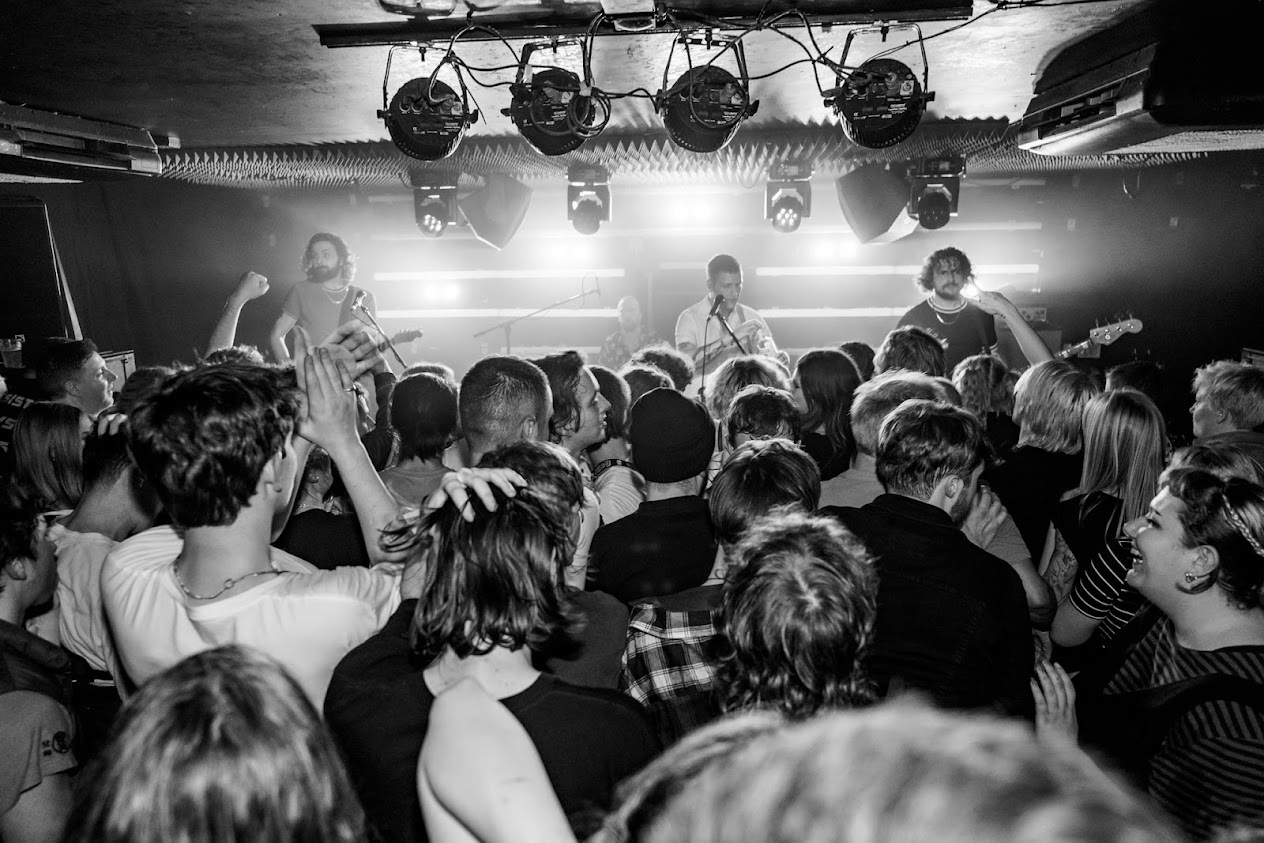 After ‘2019’ there’s a short break for the band to savour some tonic wine handed from the audience. Jack explains that he left his job in sales to become a musician, only to discover that it’s necessary to be a salesman too. “That f*cking sucks.” All this is leading to ‘The Merch Song’, which is good light-hearted fun, albeit with a serious underlying point about the difficulty of making a living from music. 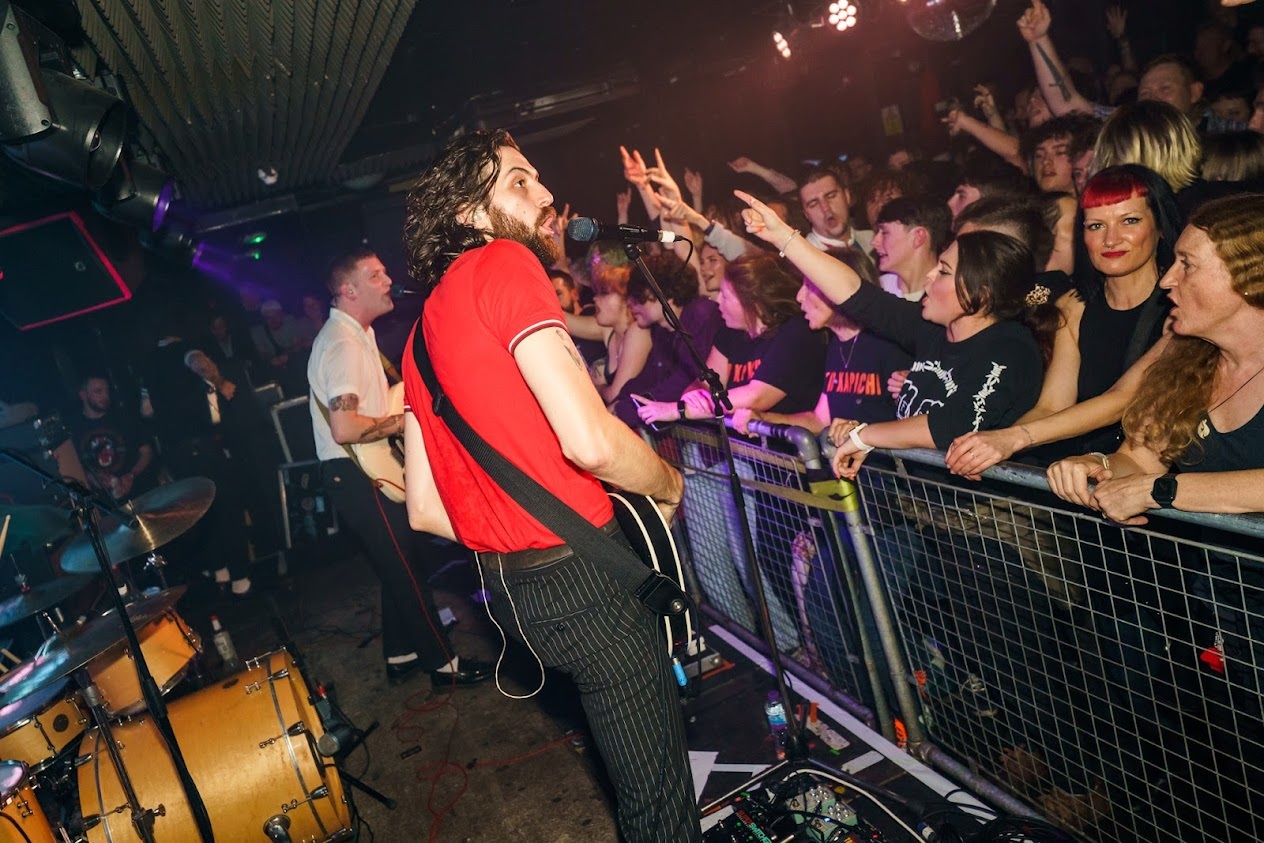 ‘Self Saboteur’ is another absolute classic that generates a huge surge of energy from the crowd. Even my old legs are getting plenty of bounce on. There’s a newer number, ‘Lucky Ones’, currently a single promoting the deluxe expanded edition of the album, and the excellent ‘Death Dips’, which inspires a fresh wave of crowd surfing. Jack had convinced himself it was the end of the set, but there’s still ‘Hope’s A Never Ending Funeral’, an emotional piano-led ballad that ends with a massive playout. Eddie must have an octaver pedal on the bass, as some awesome low end is pumping from the PA. 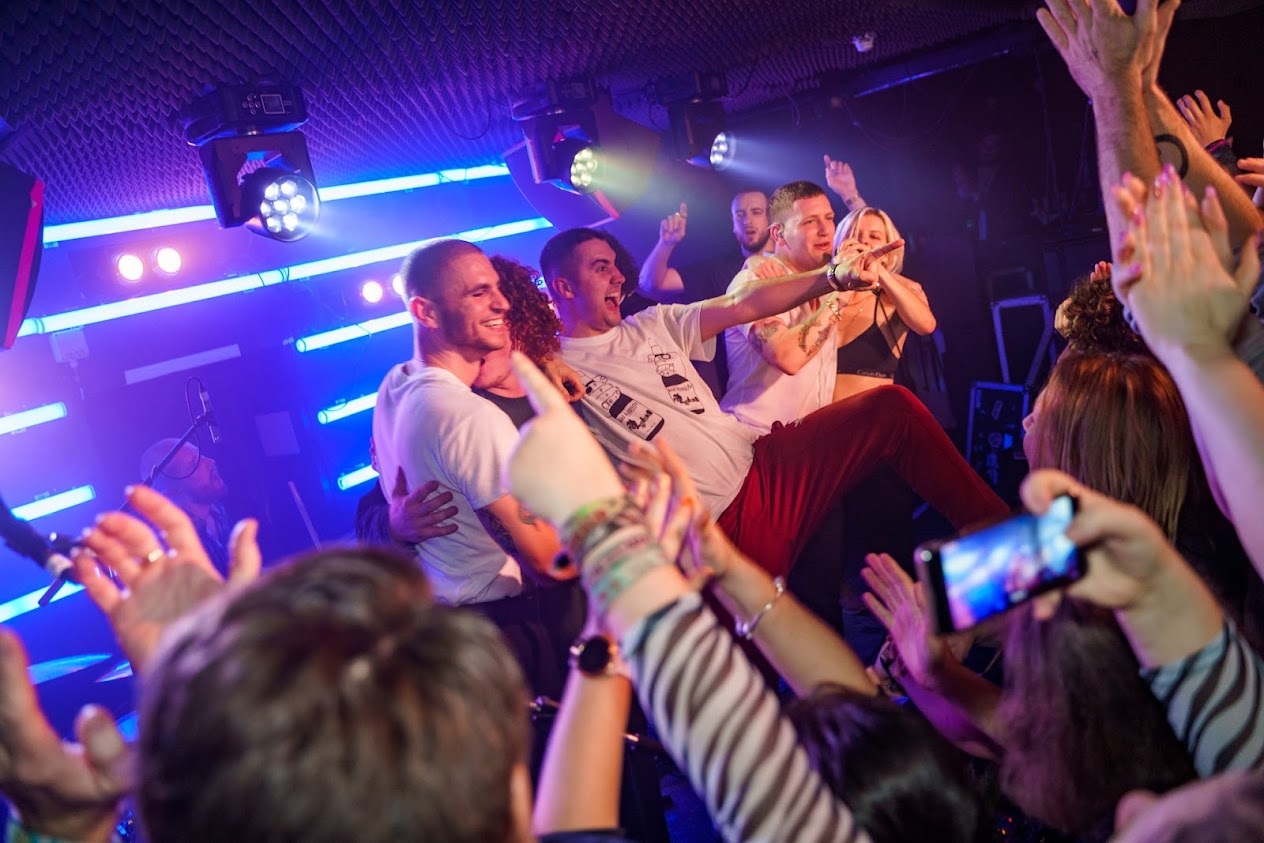 There is little doubt at the end that there’ll be an encore. The crowd has barely started chanting “One more song” before a recording of an air-raid siren starts up to introduce ‘Violence’. The song rumbles along with thunderous urgency and vitriolic fury, with the crowd taking a final chance to leap about in an ecstatic frenzy. With the last few moments of an impromptu jam, the band bid their farewells with lots of high fives to the crowd amidst rapturous applause.

Kid Kapichi are local heroes who are on the cusp of transitioning to the big time. The successful tour has laid down a marker of serious intent, and this triumphant final show has felt like a proper event. Greatness awaits. 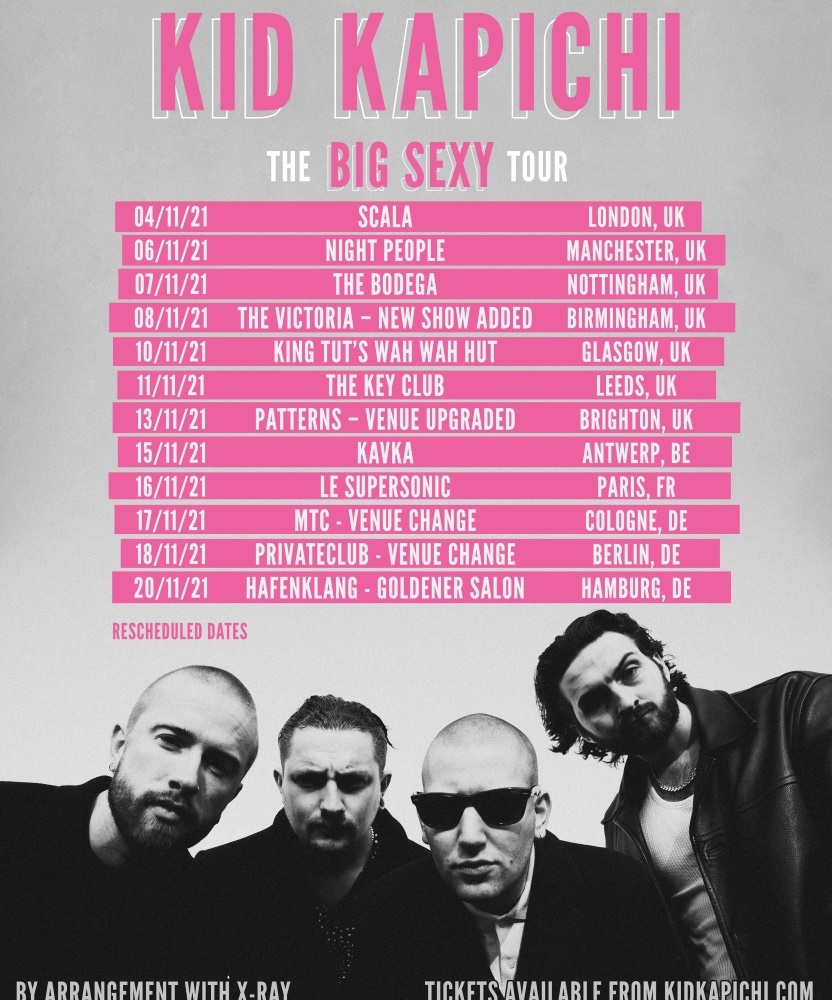