HMS Shoreham is sailing to Shoreham Harbour for a farewell visit before the Royal Navy minehunter is taken out of service.

The future of the vessel is unclear but sister ships are expected to enter service in the Baltic region or be handed over to Ukraine.

In the meantime, the crew are heading to Shoreham for a four-day visit when there will be a chance for the public to look around the ship.

For more information about the ticket-only tours, between 10am and 2pm on Sunday (15 May), click here.

The Navy said: “HMS Shoreham has departed Clyde Naval Base – her home for the past two decades – for the last time, beginning a short ‘goodbye tour’ of the UK.

“The minehunter was escorted out of Gareloch and into the Clyde by Royal Marines craft and the Faslane Patrol Boat Squadron, while Naval Base Commander Robert Anstey joined the Sandown-class vessel and tugs blasted jets of water in appreciation from fire hoses – a traditional naval send-off.

“Equipped with specialist kit, underwater vehicles and a clearance diving team, it’s been Shoreham’s mission to keep sea lanes open by ensuring there are no mines hindering the safe passage of shipping – in particular dealing with devices placed in deep waters, thanks to a sonar which detaches from the hull and can be lowered.

“Launched at the Vosper Thornycroft yard in Southampton in 2001, she was commissioned the following year in her namesake Sussex town – the fifth Royal Navy vessel to bear its name.

“In her 20 years of active service the minehunter has alternated her time between training/operations in home and northern European waters, plus extended stints in the Middle East – typically three years at a time – as part of the Royal Navy’s Gulf-based forces.

“The ship has clocked up more than 120,000 nautical miles – enough to take her around the world five and a half times – and visited more than 30 ports at home and abroad while serving under the White Ensign.”

Lieutenant Commander Andrew Platt, her final commanding officer, said: “It has been a tremendous journey for HMS Shoreham.

“She has spent over half her 20 years in service based in the Middle East, and the rest operating out of Faslane.

“To achieve such a high operational output requires a full team effort, including all the engineering, logistics and administrative support that HMNB Clyde has provided.” 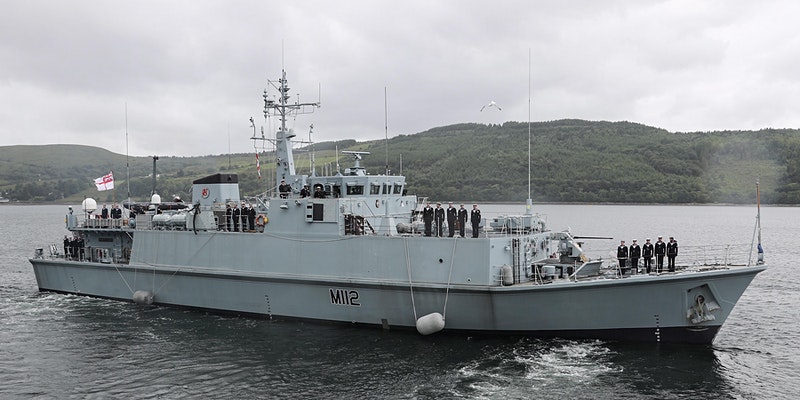 Shoreham most recently returned to Britain last October after more than two years on her latest period of operations in the Gulf, operating out of the UK Naval Support Facility in Bahrain.

Her farewell tour takes her to Shoreham later this week for a four-day visit, when the 40-strong crew will take part in a final parade through the town before they return the Freedom of the Borough scroll bestowed on the ship in 2011.

Then the ship continues through the Channel and up the East Coast to Rosyth, where she will formally decommission and be prepared for disposal.