Dozens of neighbours have objected to plans to demolish a bungalow and build a terrace of four homes in its place.

A planning application to knock down the bungalow in Deans Close, Woodingdean, and replace it with four houses has drawn 35 letters of objection from neighbours.

The council’s Planning Committee is due to decide whether to grant planning permission for the project at a meeting next Wednesday (6 July) – and officials have recommended approving the scheme.

The bungalow used to belong to the late Leigh Farrow, who represented Moulsecoomb and Bevendean ward on the council for Labour and latterly the UK Independence Party (UKIP).

There was an outcry in the area last year when workers cleared trees and bushes from the site.

Concerned residents said that the neighbouring plot, the Honeysett Wildlife Site, owned by Roger’s Wildlife Rescue since 1983, had been home to a badger sett for more than 40 years.

An ecological appraisal submitted as part of the planning application said that all on-site contractors would be made aware of the potential presence of badgers and any trenches would be covered overnight or fitted with ramps.

Councillor Bell and Councillor Simson said: “This application has already contravened Brighton and Hove’s Local Plan that states ‘must seek to retain existing trees and hedgerow’ by felling the trees and clearing the land despite objections and concerns raised at the time by local councillors and residents, thus devastating a site that was previously full of trees and an important wildlife habitat.

“This application is clearly an overdevelopment of the site. Deans Close is a small close of approximately 21 properties, all of which are individual in design.

“A terrace of houses, such as those proposed, would be out of keeping with the surrounding area and have a detrimental effect on the street scene.” 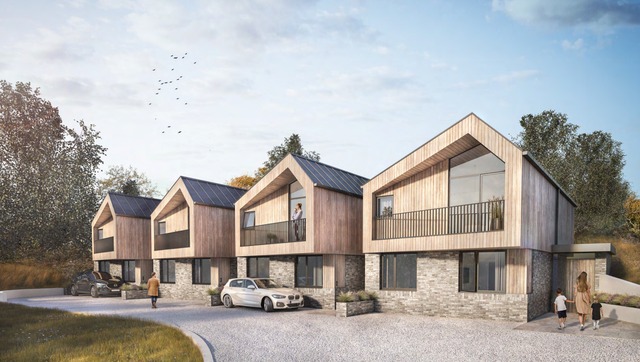 A visualisation of the proposed terrace in Deans Close in Woodingdean

The application said that there were examples of “back-land” development in the area where houses were built on former back gardens.

The number of homes proposed for the site was reduced after “pre-application consultation” with council planning officials – and a “green buffer” to the northwest of the site was included.

The Planning Committee is due to meet at Hove Town Hall at 2pm next Wednesday (6 July). The meeting is scheduled to be webcast on the council’s website.