A wildlife rescue volunteer has issued a plea for help in rescuing birds dying of avian flu.

Justin King, from the South Coast and Sussex Bird and Gull Rescue Network, said that he was at the end of his tether trying to rescue seagulls and pigeons, many of which have avian flu.

Mr King said the closure of Roger’s Wildlife Rescue in Woodingdean had come at the worst possible time and other wildlife rescue services and volunteers were having to pick up the pieces.

Although the risk of people contracting bird flu is low, the public are being advised not to touch infected seagulls.

Brighton and Hove City Council has issued guidance on how to report birds with symptoms of avian flu in public places and how to dispose of them safely if found in your garden.

East Sussex Wildlife Rescue Ambulance Service (WRAS) and Seahaven Wildlife Rescue are also helping sick gulls, although their centres are no longer able to take them in to protect the animals already being cared for there.

Mr King said: “I have rescue requests coming out of my ears, hardly anyone to help and I’m now running a makeshift hospital from my garden.

“The council are not helping. Gulls are being dumped everywhere imaginable, including the doorsteps of the seafront offices and DEFRA (the Department for Environment, Food and Rural Affairs) has done nothing to help other than to provide a phone number that offers nothing.

“Volunteers are drowning with no support. We are beyond breaking point, with two hospitalisations of staff including myself. Some are losing their jobs.

“Baby birds are now having to be quarantined by us and sent to people’s houses and gardens to be raised until August.

“Apart from the council proposing to erect signs on the beaches, which provide no helpful support, they have offered nothing.

“It is us who are doing all the work and we have done since May when the last wildlife site in Brighton shut its doors.

“There has been no mention of the mental impact it is having upon us and we are having to rely upon donations, not from the media, not from the council, not from DEFRA, but yet again from the public.

“Now we are in flying ant season and these symptoms are further confusing things for us and being confused with avian flu.

“Furthermore, the violence and neglect towards these birds has increased 100-fold. Things are getting worse for all of us.” 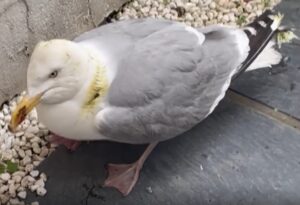 Mr King has started an urgent appeal for volunteers, drivers and people to adopt birds as well as donations of crates, puppy pens, soap powder, cat and dog food and towels.

The water and electricity costs are huge from all the washing they have to do, he said.

The appeal has already raised more than £1,000 on the Just Giving website with a target of £1,500. To donate, click here.

Alternatively, a crowdfunder on the Go Fund Me website has raised more than £3,600 towards a target of £5,000. To donate, click here.

Editor’s note: This story has been corrected to make it clear other Sussex wildlife rescue services, including East Sussex WRAS and Seahaven Wildlife Rescue, are still attending gull rescues.

They are also taking in other birds which are not affected by avian flu.