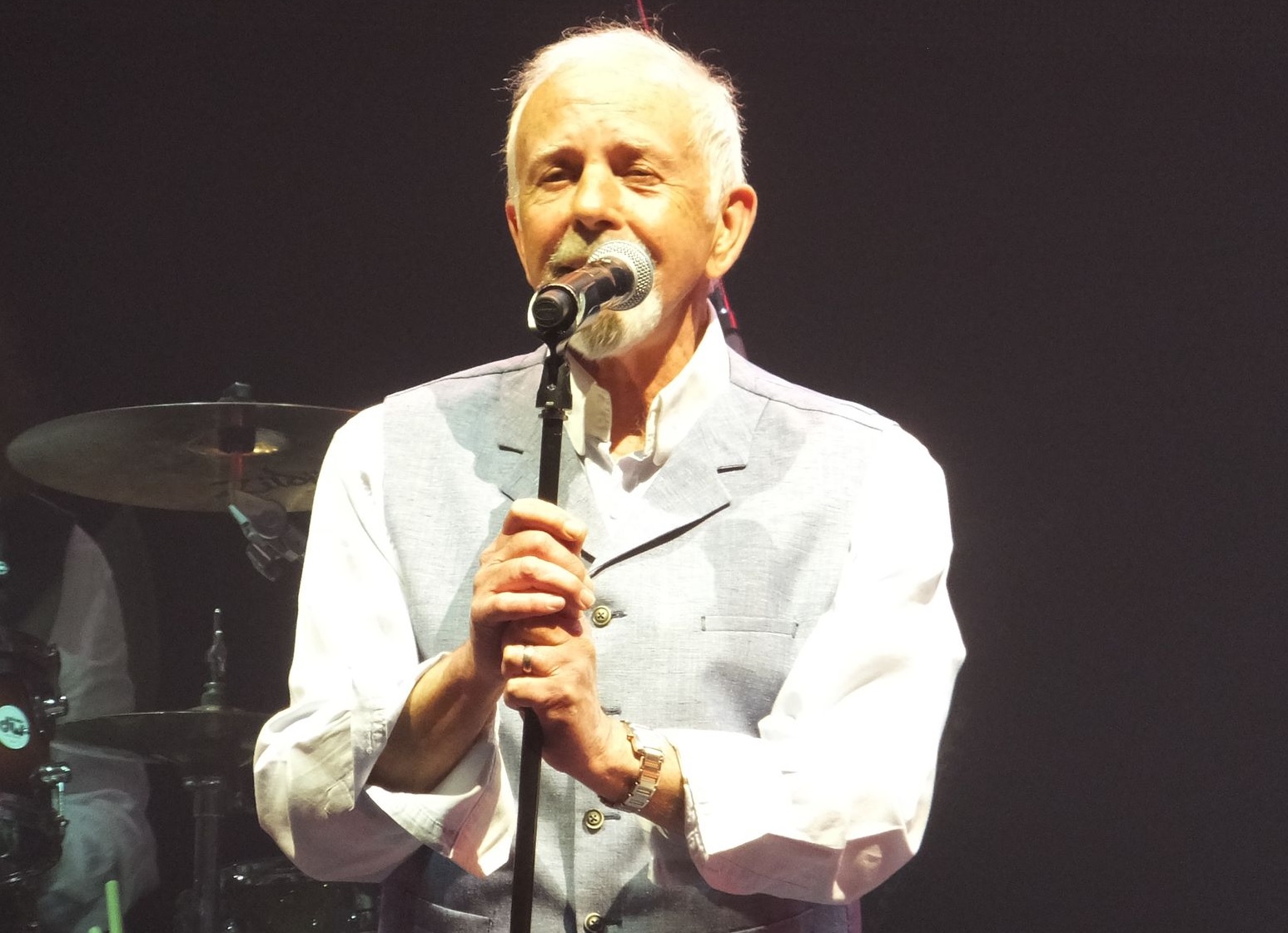 At last! Internationally renowned singer, composer and actor David Essex OBE finally got to play live at the Brighton Centre after a wait of 706 days courtesy of covid. As David pointed out this evening, his UK tour had to be rescheduled twice. The concert should have originally taken place on Saturday 17th October 2020. Thus this was to be his first major tour in six years, and tonight he was performing much loved hits spanning across his entire repertoire.

According to David’s promotional material, it indicated that he “is the only artiste in the world to have achieved success in all areas of entertainment”. Quite a bold statement methinks! In the 1970s, he emerged as a performer of some note and has enjoyed a remarkable career that has combined concerts, records, theatre, composing, films and television with striking success. He has written, recorded and produced albums that have sold millions of copies worldwide. 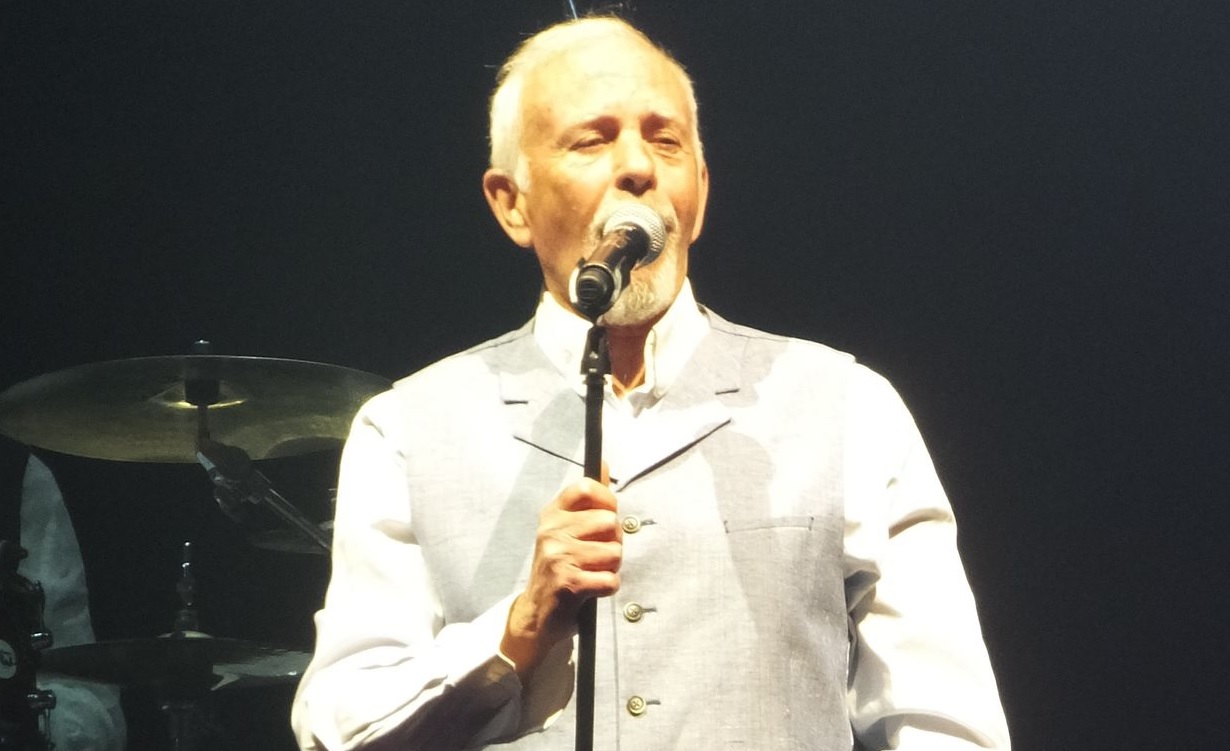 David was actually born ‘David Albert Cook’ on 23rd July 1947 to Olive (née Kemp) an Irish Traveller and self-taught pianist mother, and to Albert, his father, who was an East End docker. He grew up in Canning Town and interestingly was a member of West Ham United Juniors for a while.

Some of you may recall that the Plaistow born 75 year old first shot to fame when in 1971 he landed the role of Jesus for the London production of the musical ‘Godspell’, for which he received major awards and some ecstatic reviews. This saw him lead a cast at the Roundhouse and then at the West End for two years. Two years later, in 1973, he starred as Jim MacLaine in the British coming of age drama ‘That’ll Be the Day’ along with former Beatles drummer Ringo Starr. As the film was such a success, a sequel was commissioned and released the following year. Its name being ‘Stardust’ and the 44 tune double LP was released in October 1974 by Ronco and was the very first album that I ever purchased! 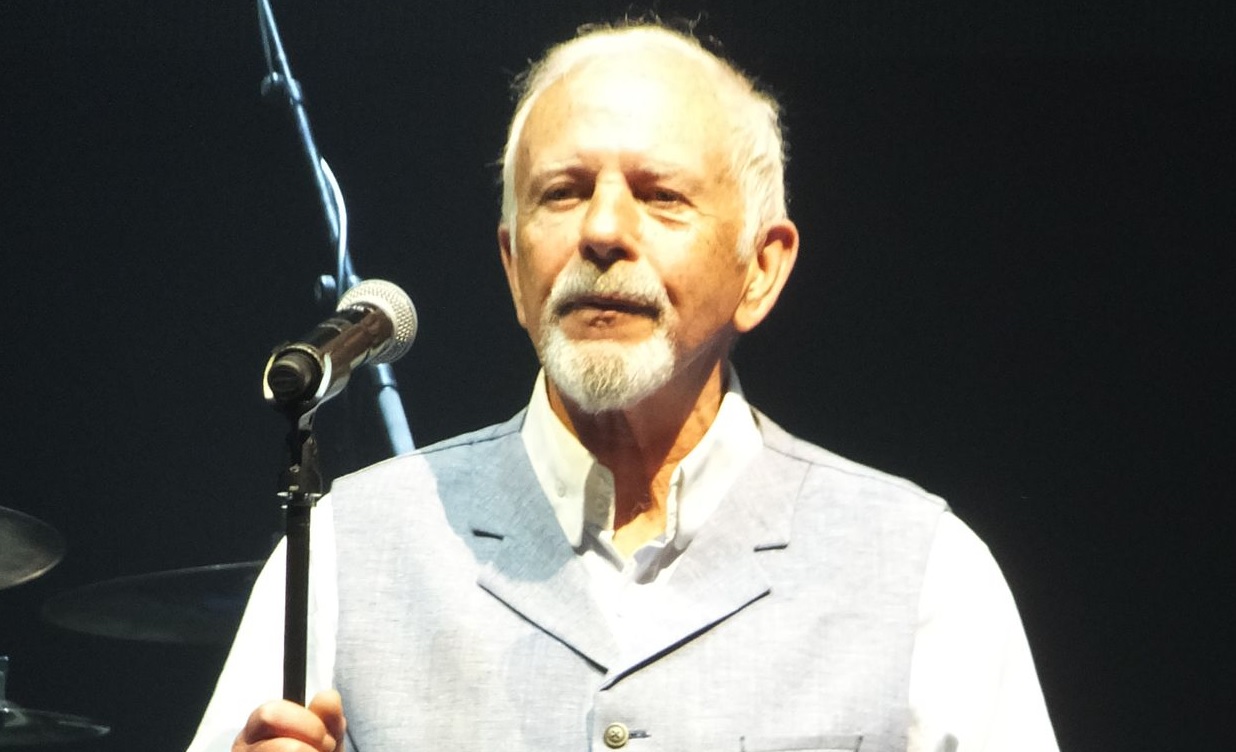 I had previously been buying many 45 RPM singles before this, where my collection included a promo copy of his Grammy nominated ‘Rock On’ glam rock single which dropped in August 1973. I wish I had kept it and the follow up single ‘Lamplight’, that I also owned, but when “the music of the future” arrived on BBC’s ‘Tomorrow’s World’ in September 1975 in the form of ‘Autobahn’ by Kraftwerk (which had been released in May), suddenly everything seemed really dated! Although David Essex’s 1974 No.1 smash hit single ‘Gonna Make You A Star’ did have some decent synthesizer work in it and cemented David’s place as a household name. Which much later on was reaffirmed when he played the head of the Moon family in ‘Eastenders’. Other acting credits also include ‘Traveller’, ‘The Guvnors’, and ‘Black Prince’. Theatre credits included performances in ‘Evita’, ‘Boogie Nights 2’, ‘ELF!’, ‘Footloose’, ‘Andrew Lloyd Webber’s Aspects Of Love’, plus his own musicals ‘Mutiny!’ and ‘All The Fun Of The Fair’.

And so on to this evening’s performance, where I arrived in time in order to purchase a pint of IPA which sadly was rather vinegary, so not an ideal start. I made my way to my seat a few minutes before support artist Tim Newman graced the stage. I was pleasantly surprised that there was a decent attendance of mainly mature souls this evening who virtually filled the arena despite the Autumnal weather. Although having said that, the East and West balconies were curtained off (shut), but it was still an impressive turnout.. 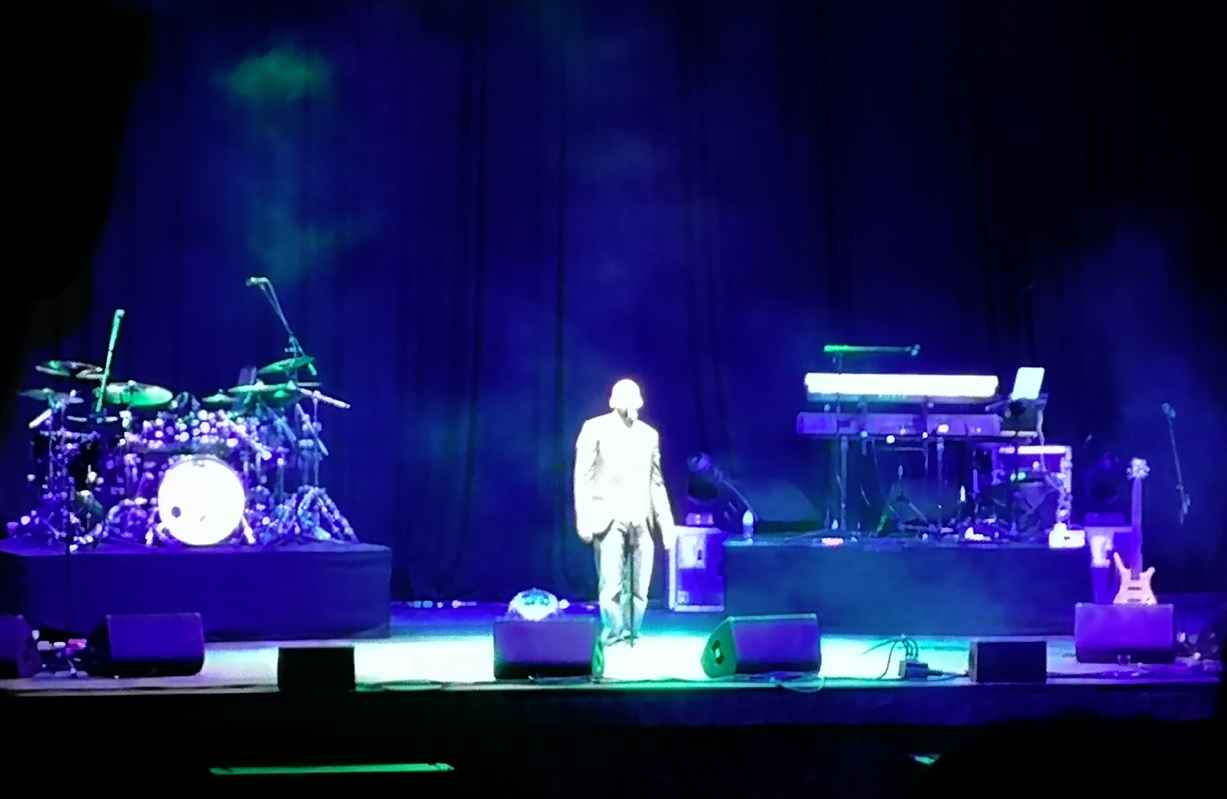 Tim (with his freshly shaved head) graced the stage at 7:33pm and endeavoured to warm us up for the next 34 minutes, although he only performed five tracks in all this time. Yes you have deduced correctly, there was much Butlins style follow-the-teacher ‘warming up’ banter to be had, which I’m certainly not a fan of, more cheese than Cheddar!. The backing tape stored all of the music, whilst Tim karaoked his pop ballads at us. He has a powerful voice, but I honestly think that his set would have certainly benefited by having a live band on stage with him, even if they would have had to hang around whilst Tim joyfully told us his life story. This included the fact that he lives around the corner from the venue with his wife (Kate) and their 10 year old son, and that his son has a YouTube channel (‘Parker Time’, I think it was) and Tim is a co-director of the Brighton Academy of Performing Arts and that he met David Essex when he auditioned for the ‘All The Fun Of The Fair’ play, and that he won the part of David’s son. This was Tim’s third tour supporting David as well and that Tim has an album out that could be purchased in the foyer, as he told us…..several times!!! Tim vacated the stage at 8:07pm 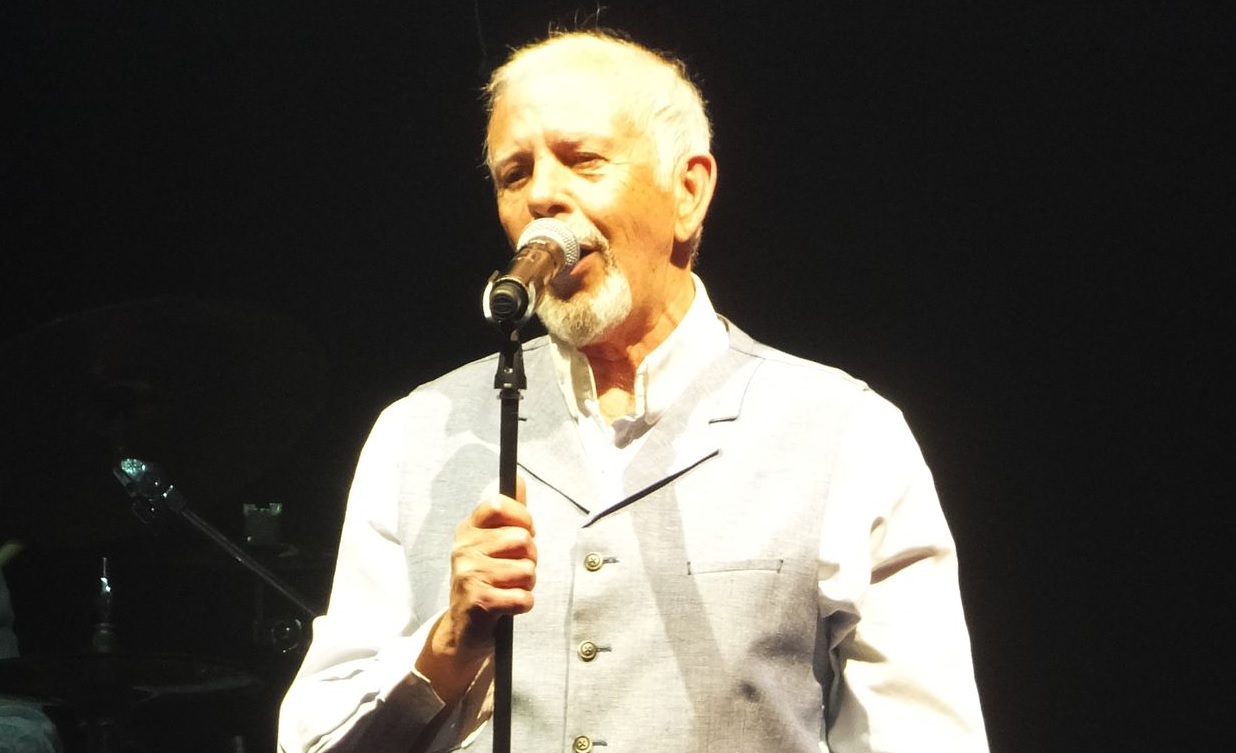 In the 25 minute break, the crowd were entertained over the soundsystem by the likes of K. C. & The Sunshine Band, The Jacksons, Edwin Starr and the like, in order to get folks in the party mood. By now, many would have already noted the David Essex picture on the front of the drum, which no doubt whetted the mums and nan’s appetites of the days when they used to buy ‘Jackie’ and ‘Look-In’ as David was on the cover. In fact, to many in attendance, he still is a sex symbol, I even swear blind that I saw a blue bra hurled towards the stage during track thirteen!

At 8:30pm the house lights went down and an intro tape played snippets of Essex’s tunes, on top of which were heard footsteps, as an indication that tonight’s star was on his way. Blue lighting dazzled us as at 8:32 pm, David’s band took to the stage. This consisted of Dave Wallace on drums, Musical Director Ian Wherry on Korg keys, other keys and laptop and bv’s, Gerry Moffett on bass and bv’s and Dave Needham on guitars and bv’s. Mr Essex arrived at 8:33pm sporting his usual tailored large grey jacket with black lapels and hanky poking out of the breast pocket. Black boots and grey jeans trousers were the order of the day, plus a blue waistcoat and white shirt. This was almost identical to his chosen clothing when I last saw him here at the Brighton Centre on 21st October 2017 as part of the ‘Legends Live’ 2017 tour. (Review HERE) I describe his attire in great detail as sadly there was no allocation for press photography this evening, and I suspect for the duration of the whole tour as well. Thus, we are showing you shots from a while back instead. 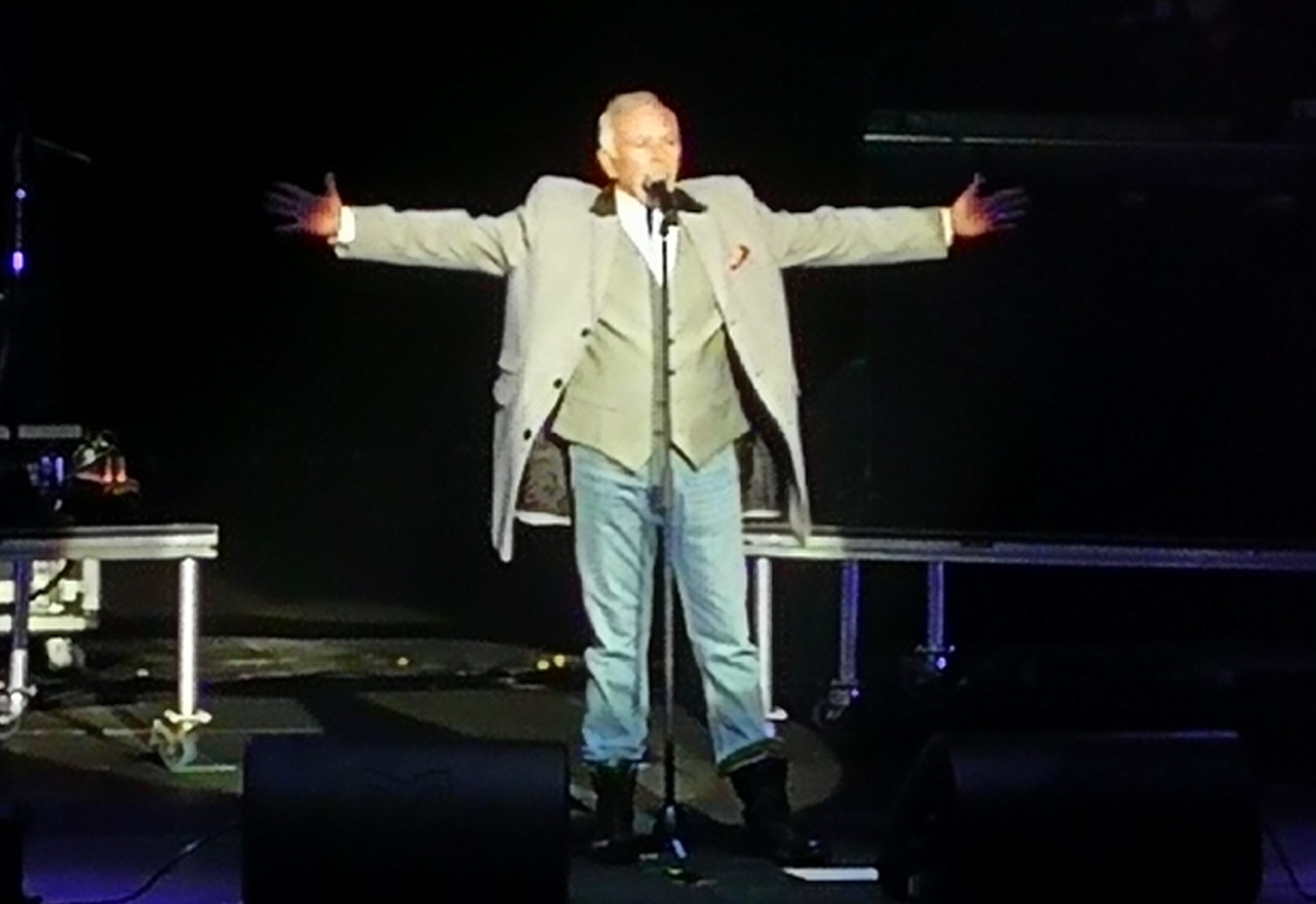 David Essex live at the Brighton Centre 21.10.17 (click to enlarge)

David and his chums kicked off their 17 track set with 1976 Top 30 single ‘City Lights’, which is a funky rock number and ideal for getting the punters onside. Just in case that didn’t work, then his 1975 No.1 smash ‘Hold Me Close’ followed. Top 10 1973 single ‘Lamplight’ was up next and that was also well received. 1975’s ‘If I Could’ Top 20 single had an airing next, which was followed by the title track from David’s 2006 ‘Beautiful Day’ album, which had a David Bowie meets U2 vibe going down.

Crowd favourite, the 1978 Top 5 single, ‘Oh What A Circus’, from the 1976 ‘Evita’ musical had an outing, and after this was the 1979 Top 40 track ‘Imperial Wizard’, which for me was the surprise highlight of the whole set. It reminded me of a drummer boy backing with a slowed down version of Frankie Goes To Hollywood’s ‘Relax’ bass keys. David said it was about Russian Imperialism. This was only bettered by two other tunes on the night, the first of those being the hauntingly wonderful ‘Rock On’ from 1973 and five tunes further on with ‘Gonna Make You A Star’, the No.1 smash from 1974, for which many fans got out of their seats and ran to the front of the auditorium for that up close and personal fix. Sandwiched in between these were ‘A Winter’s Tale’, ’Here We All Are Together’, ‘Father And Son’ and ‘Stardust’. 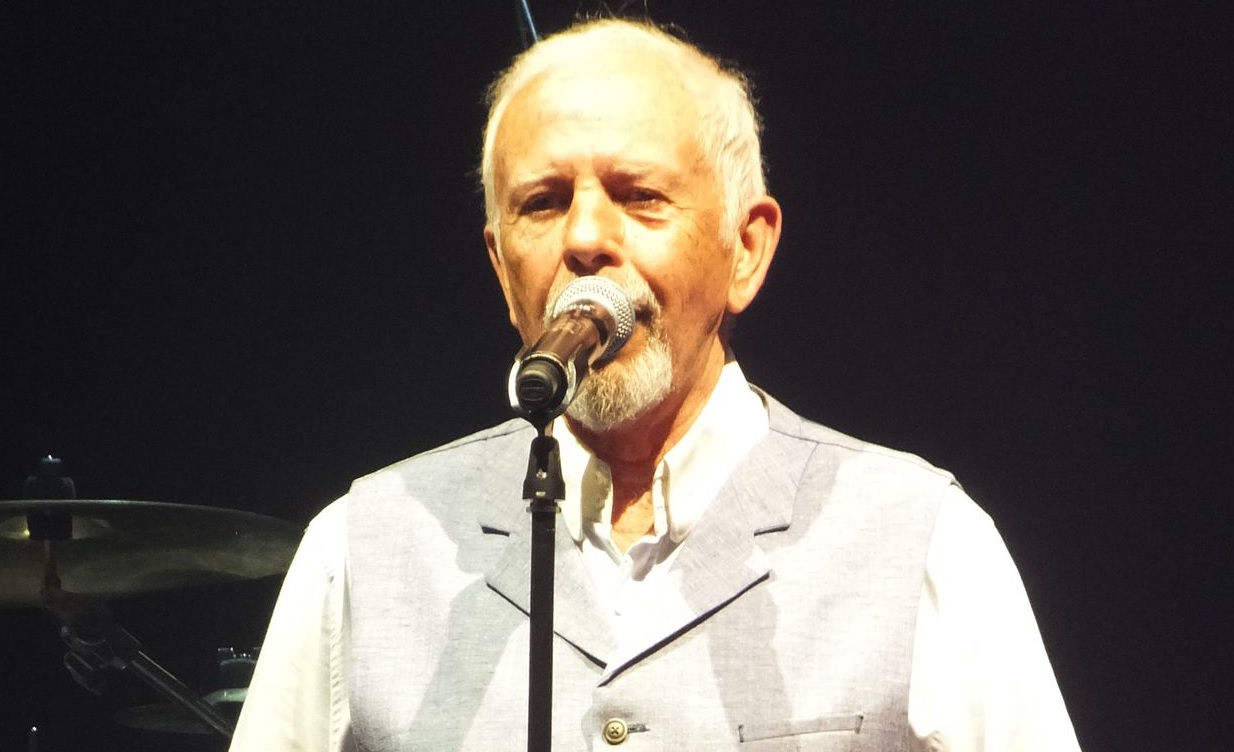 David Essex informed us that he has four boys and a daughter and that three of them were here with us this evening, so it was a special night for the Essex family.

Before the encore, they played their cover of The Kinks ‘You Really Got Me’, which can be found on the David Essex ‘Theatre Of Dreams’ live album from 2002. A disappearance of just a minute allowed the band to play a trio of other tunes for us, before closing at 9:51pm. Those being ‘It’s Gonna Be Alright’, (which reminded me of Bob Geldof’s “Silicon chip inside her head” vocal delivery for ‘I Don’t Like Mondays’), ‘Silver Dream Machine’ (which saw many fans clapping and got the biggest cheer of the night) and finally ‘I’ll Be Missing You’.

The sound has been absolutely crisp all evening with not a lyric missed. David certainly wasn’t gonna build up a sweat tonight with a 75 minute set, which I reckon is a little short when given the choice of material to plunder from, 90 minutes would have been about right. Having said that, it was still an entertaining evening out and his fans adored him and he left them with “I luv ya, seeya” and off he strolled followed by the band a few seconds later. This certainly was more enjoyable than staying indoors and enduring the wrath of a certain Giacomo Raspadori, as we suffered relegation from the UEFA Nations League. 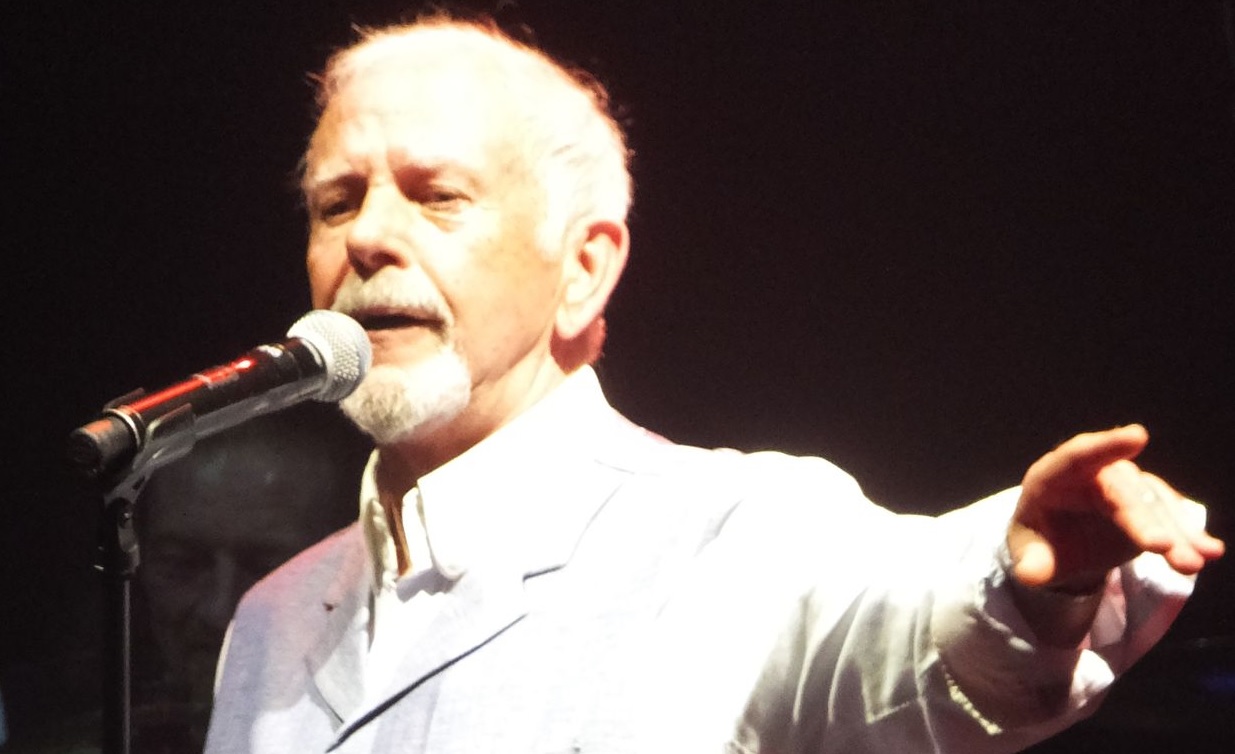 David Essex setlist:
‘City Lights’
‘Hold Me Close’
‘Lamplight’
‘If I Could’
‘Beautiful Day’
‘Oh What A Circus’
‘Imperial Wizard’
‘Rock On’
‘A Winter’s Tale’
‘Here We All Are Together’
‘Father And Son’
‘Stardust’
‘Gonna Make You A Star’
‘You Really Got Me’ (The Kinks cover)
(encore)
‘It’s Gonna Be Alright’
‘Silver Dream Machine’
‘I’ll Be Missing You’ 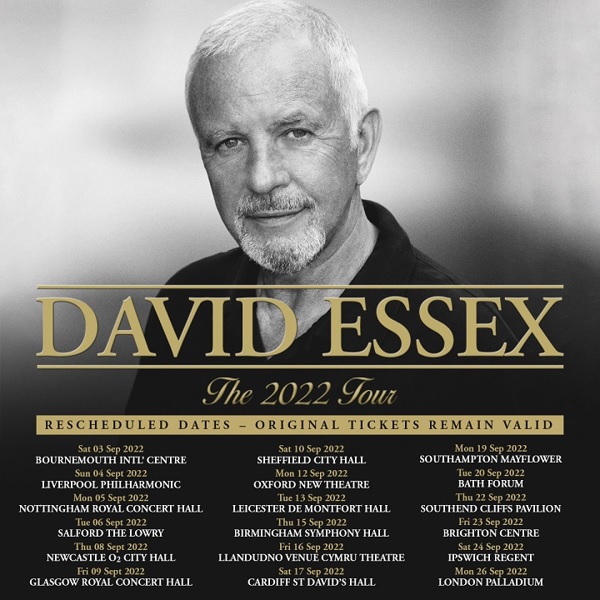 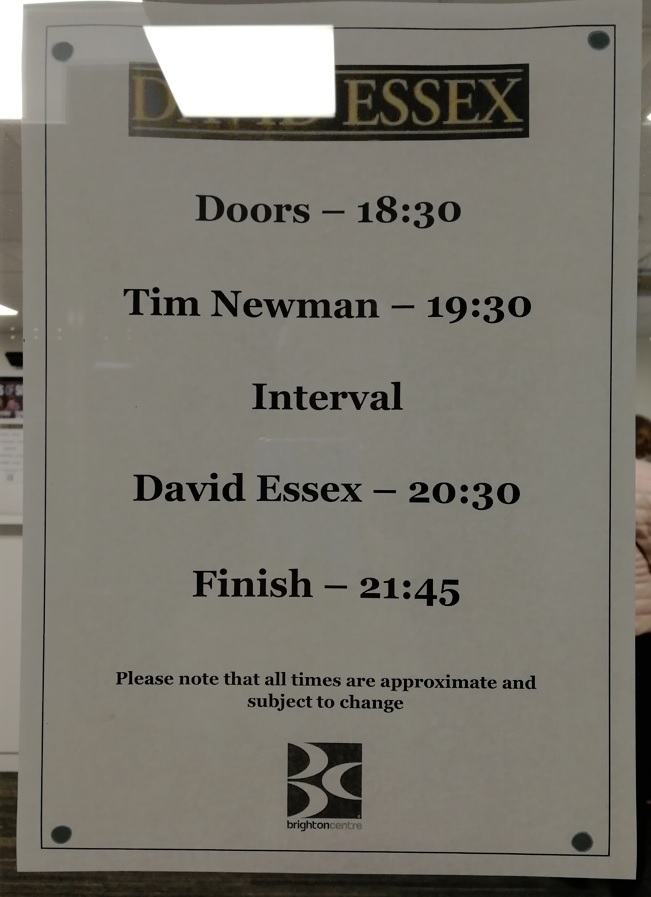 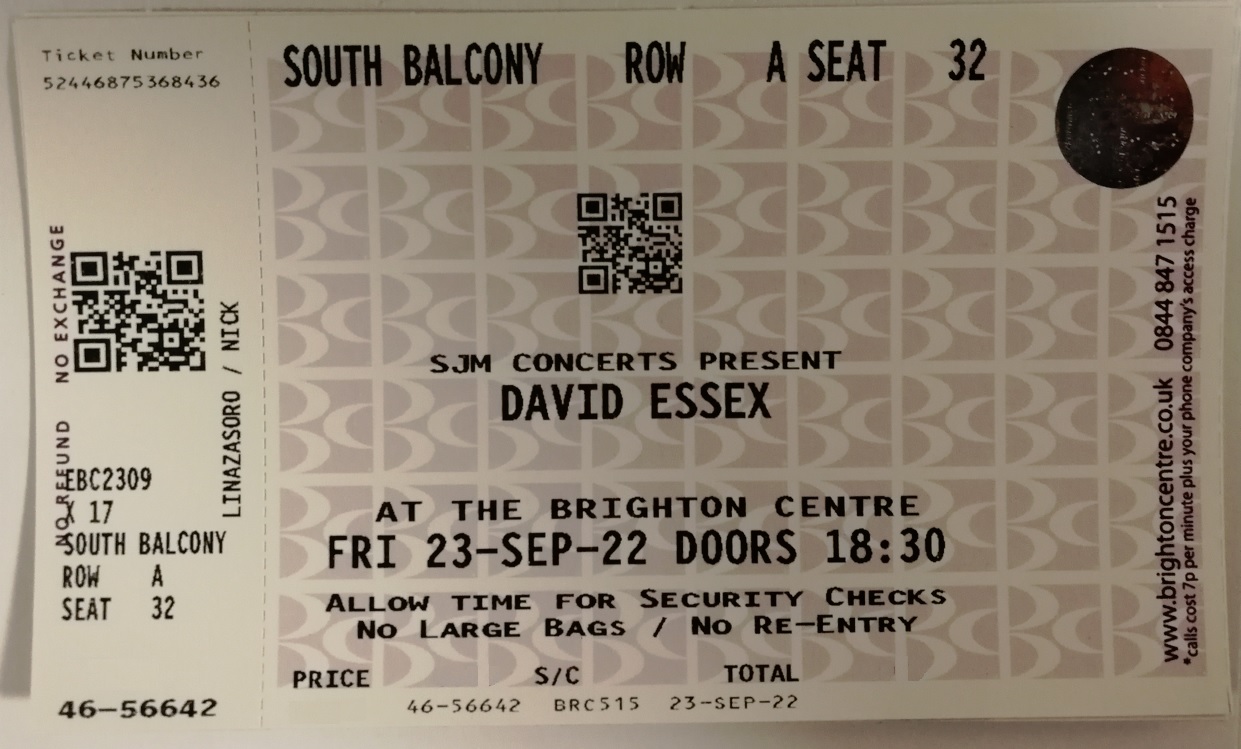