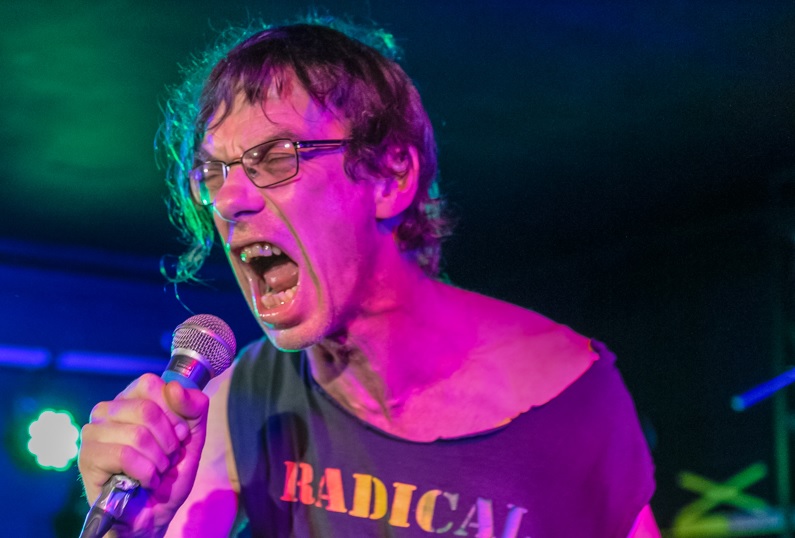 After a morning of sunshine, the weather turned into rain and wind; which isn’t the ideal evening to venture out to The Con Club in Lewes. But, fans of all three bands this evening turned up, with some making a sterling effort with their outfits. It was generally the younger of the audience that dressed up, in styles that wouldn’t have looked out of place if a time-machine had turned up and transported us all back to the early 80s. Mohicans, studs, tartan, goth make-up, multiple piercings – it was all there. 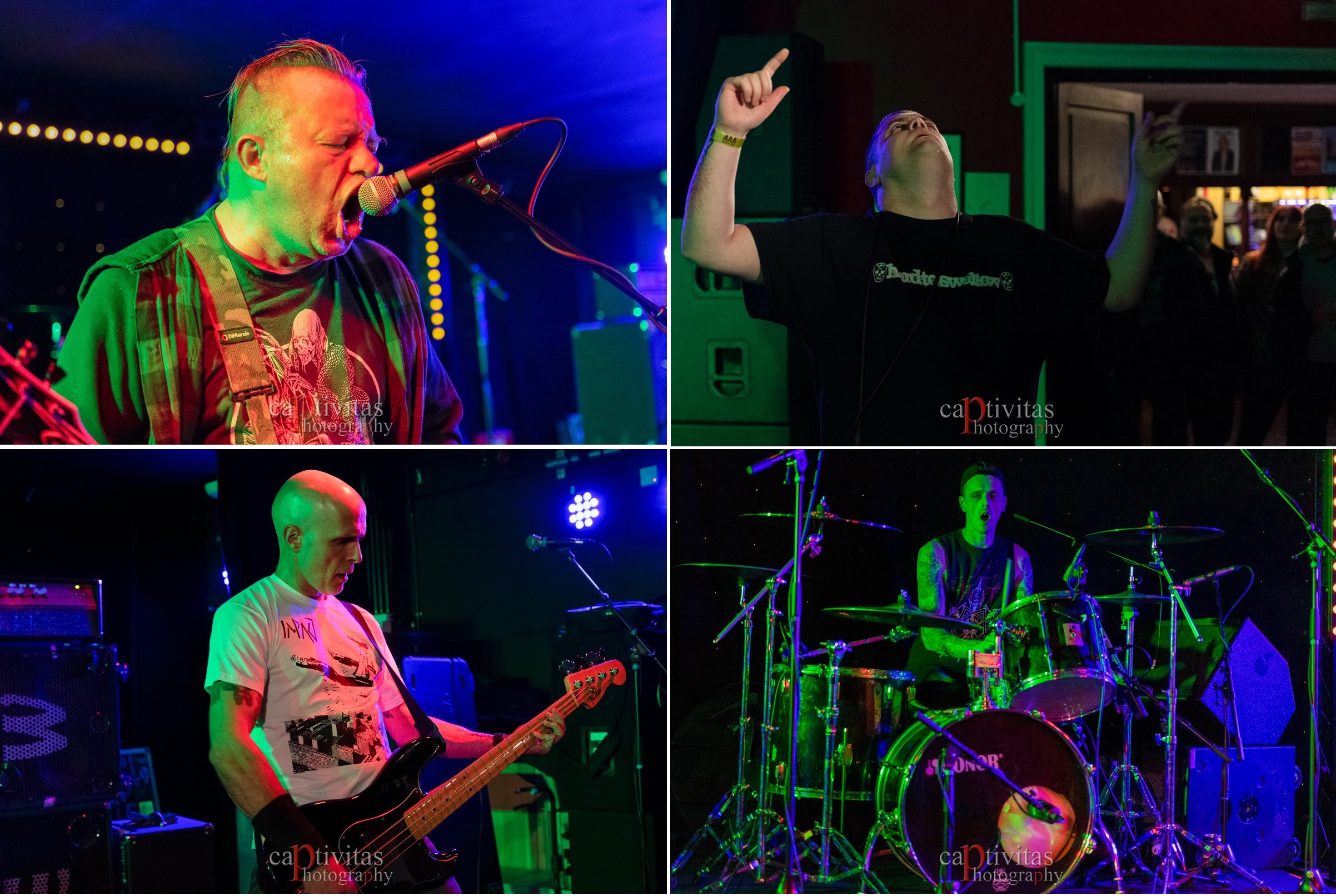 The first band of the evening courtesy of promoters ‘Death Or Glory’ are “Zero Again” who started their 30 minute set with an angry energy that was loud, very loud! (glad I had ear plugs). The lead singer of this 4 piece hardcore punk band from Bristol took to the floor, and not the stage to kick off the evening’s entertainment which was much appreciated by the crowd and gave total involvement. He wandered around the floor for every track, even when mini moshes of a round half a dozen erupted with friendly pushing and shoving – but we’ll have more on mosh pits later. 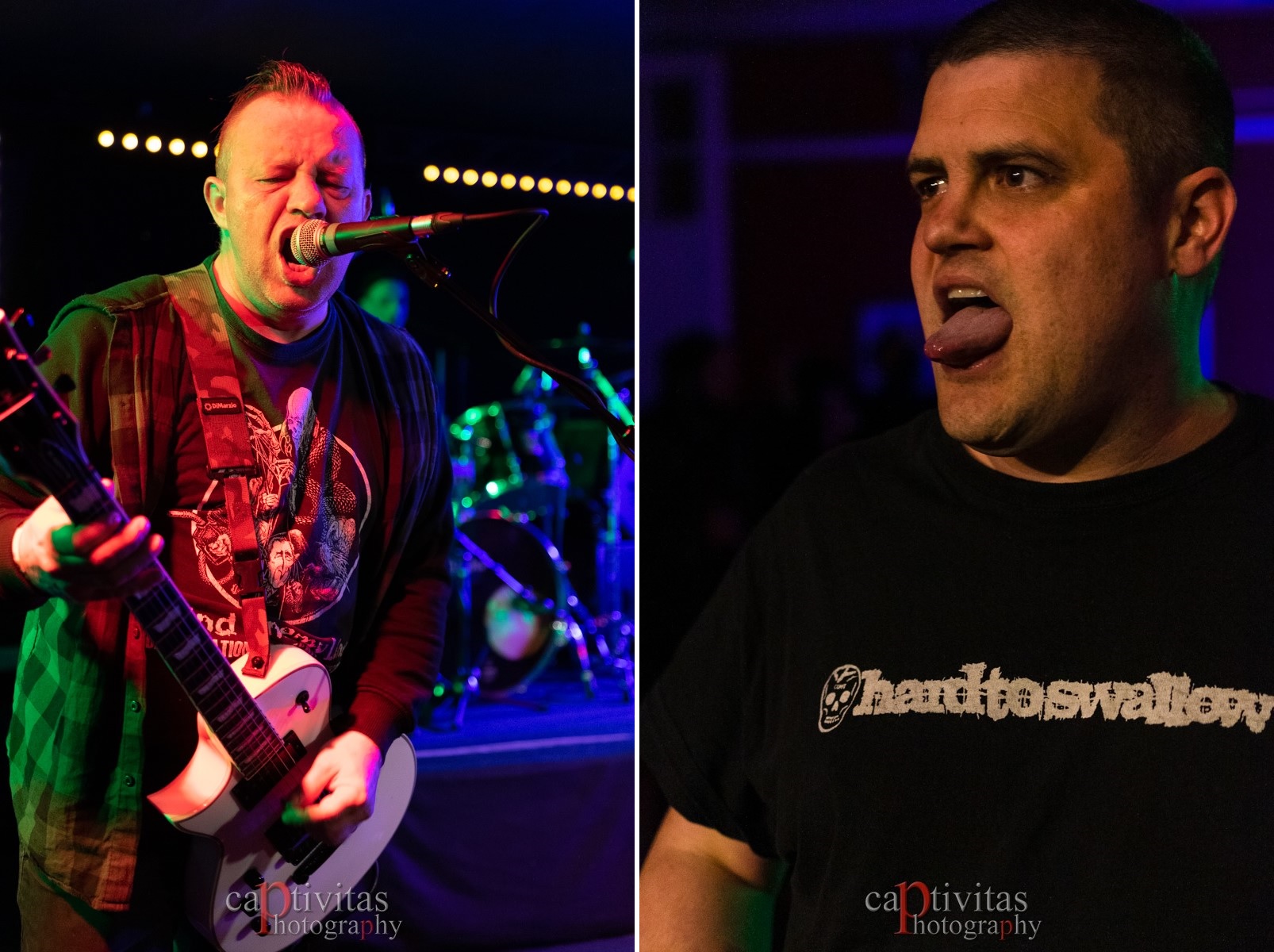 All of the tracks were sung (for want of a better word) in a screaming/death growl style. There weren’t many gaps between tracks, so for me, it was hard to define each one. This is a group of serious musicians who kept it tight even though their frontman wasn’t on stage with them. They weren’t exactly “My World (Now)” for me, but the fans that were there lapped it up. 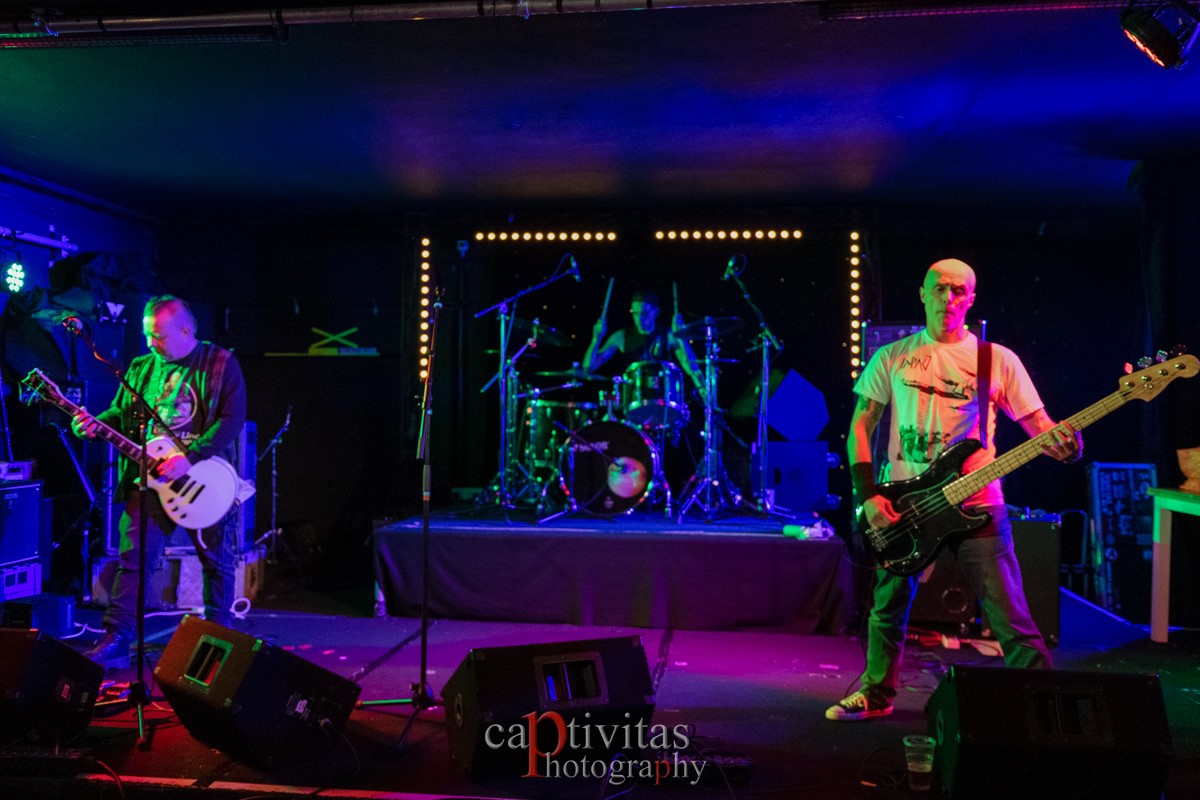 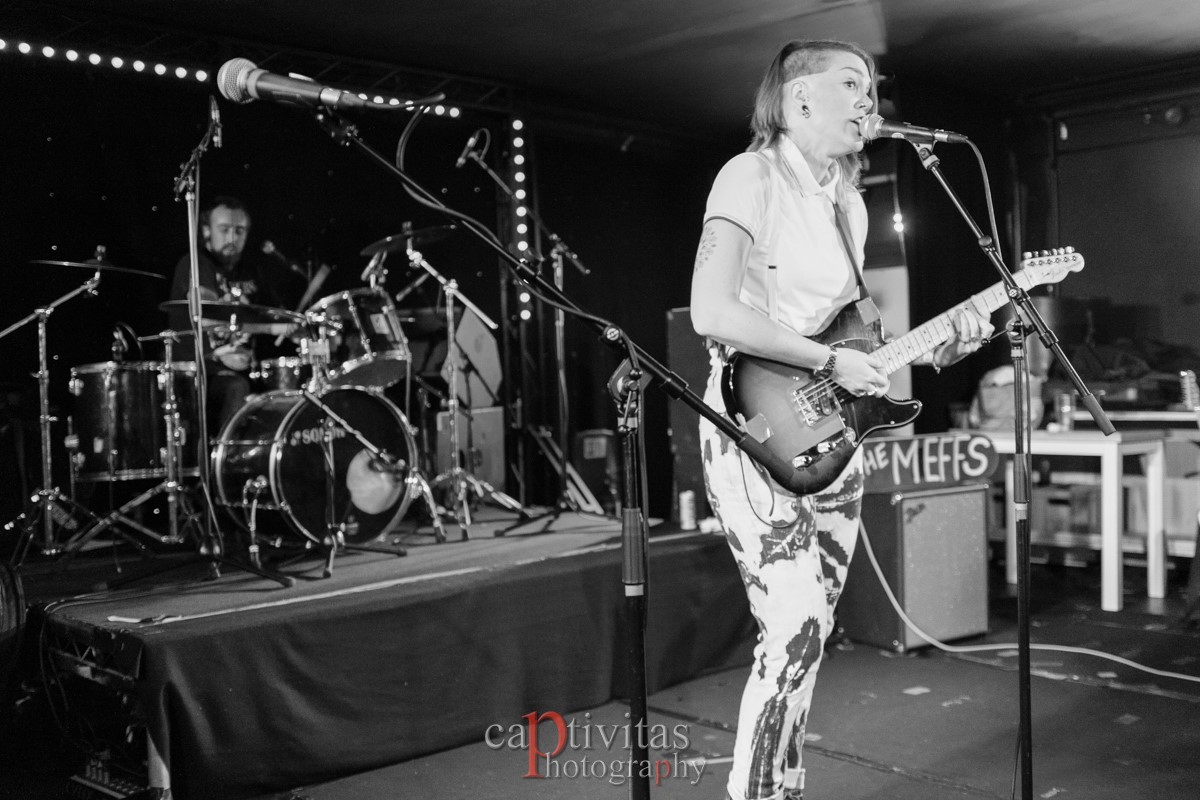 Next up it was the turn of The Meffs who are not to be mixed up with The Muffs. Tonight’s Meffs are a duo from Essex made up of Lily on vocals/guitar and Lewis on drums. After the first song, Lily struck a chord and asked the audience to move in further to the stage. No-one moved, but Lily held the chord saying she could see people’s feet edging forward and she could hold it all night as it was the only one she knew; very interactive with the audience. 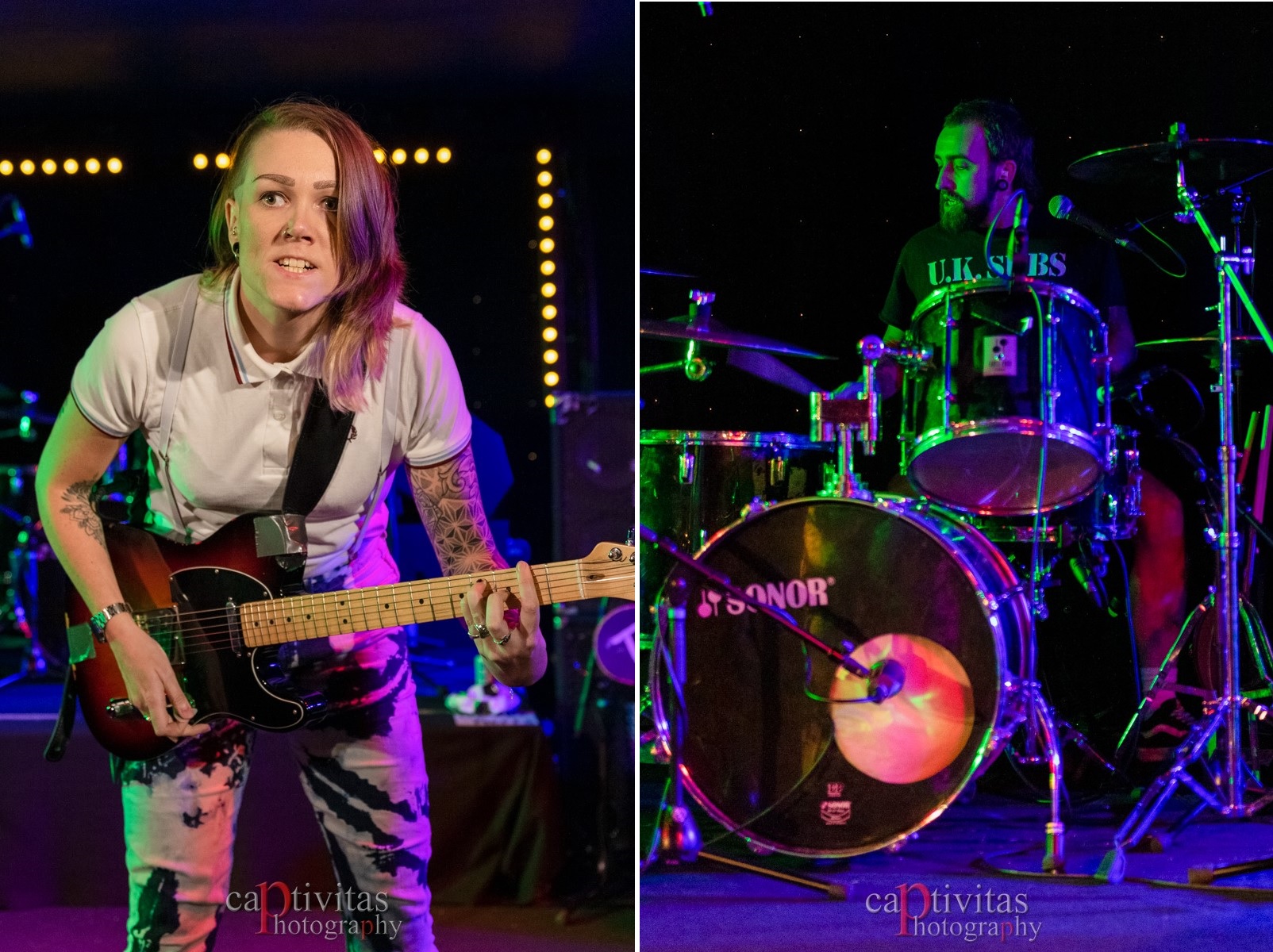 Lily had a maniacal look and dressed as though she had been in “This Is England” (if you haven’t seen it, why not?) – bleached jeans, Fred Perry’esque polo shirt and white braces. Lily played every track with the same vigour never missing a chord. Reminiscent of Rudimentary Peni from the early 80s, they carried forward the same energy and sound, with the anger of the youth, which still resonates with original fans of the genre with those coming along in their wake. 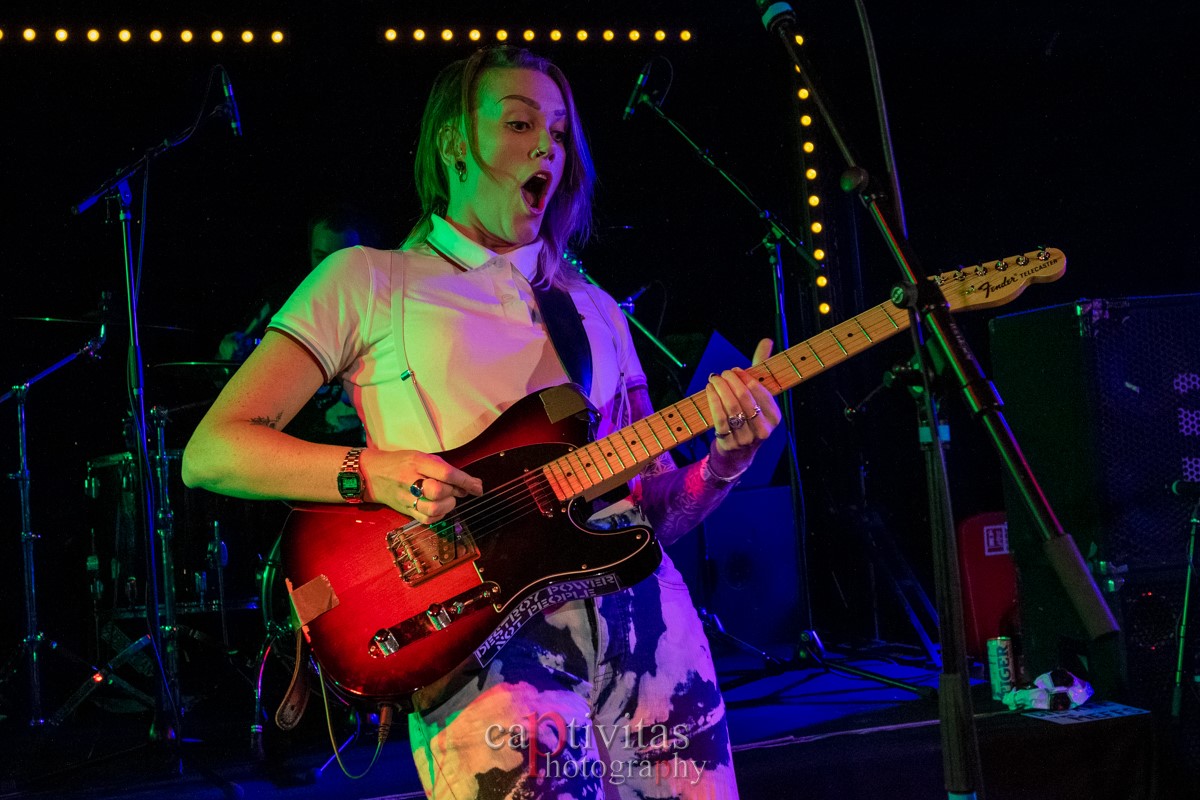 The Meffs setlist:
‘No Future’
‘Budget Luxury’
‘Austerity’
‘Stand Up’
‘Get Real’
‘Your English Is Great’
‘BBBB’
‘Look At You’
‘Sex Sells’
‘You’ll See’ 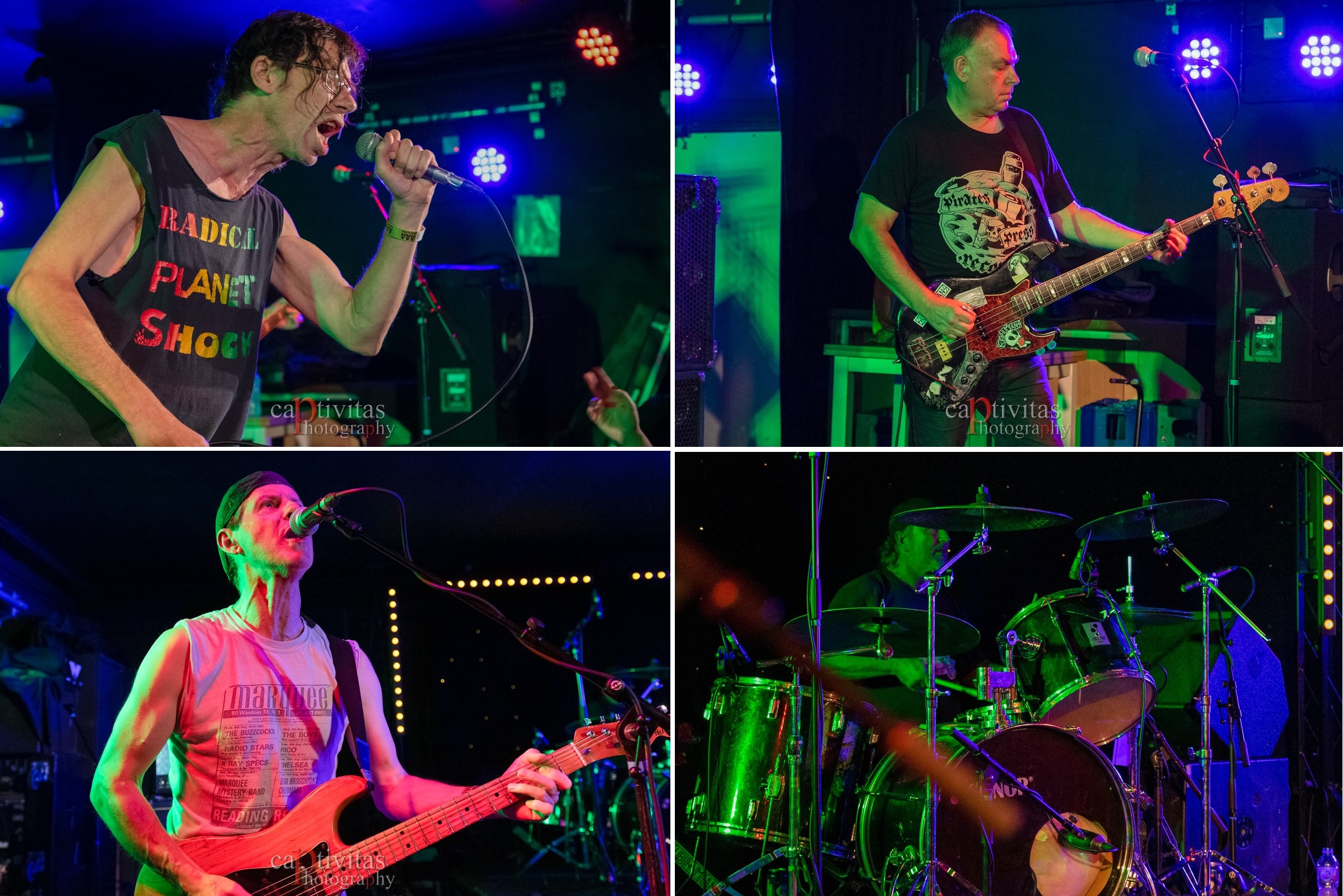 The term anarcho-punk could have been penned for the Subhumans – from their beginnings at the dawn of the 80s they have written and performed classics of the genre, so it is unsurprising that when they took the stage at The Con Club, there was a massive cheer from the audience of original and new era fans. 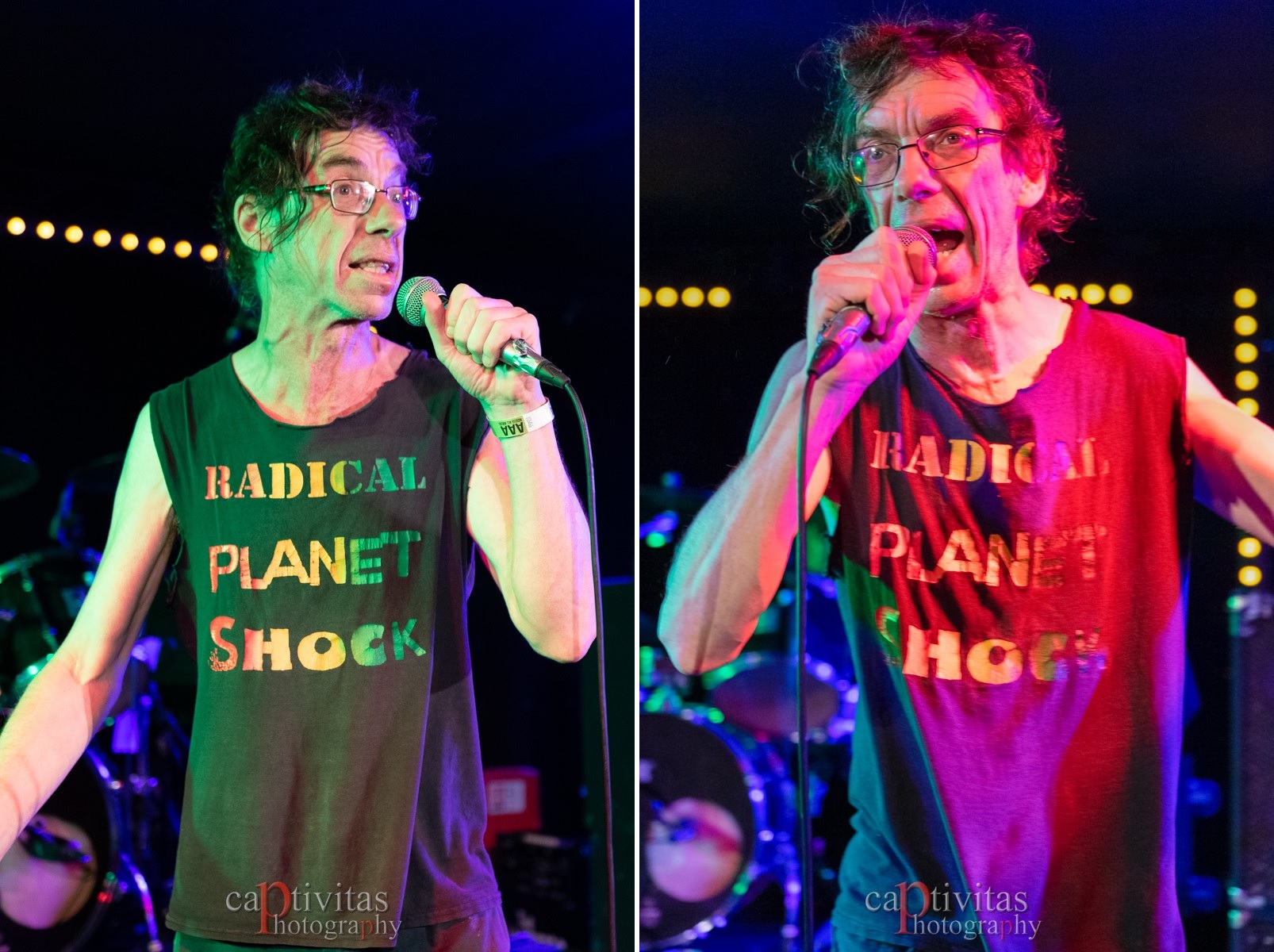 They had barely got in their stride with the first song, when there was a problem; a big problem. The guitar amp had blown up! Silence ensued. Dick (singer) then took proceedings on himself and sang what felt like a sea shanty mating with political anger, accompanied by Phil (bass) and Trotsky (drums), until a replacement amp was found, and plugged in. Feeeeeeedback was then the order of the day until Bruce (guitar) found his settings and smiled at the audience. 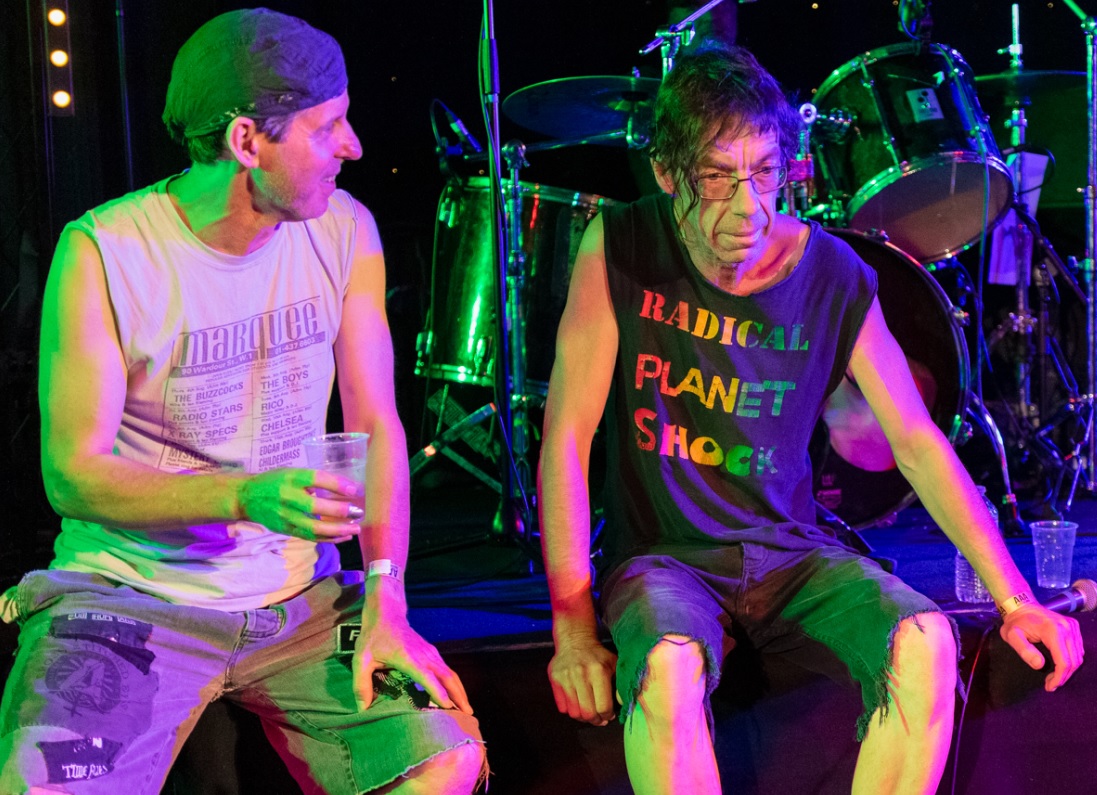 Back on track, the Subhumans performed as you would expect from a band who have been together in their current guise since 1983 … 39 years gets a band to this level. What followed was classic after classic – ‘Mickey Mouse Is Dead’ (well he must be by now, right), ‘Zyklon-B-Movie’, and of course THE Subhumans track that defined them, ‘Subvert City’ – the hammering rain and gale force winds outside, just didn’t matter this evening in Lewes. 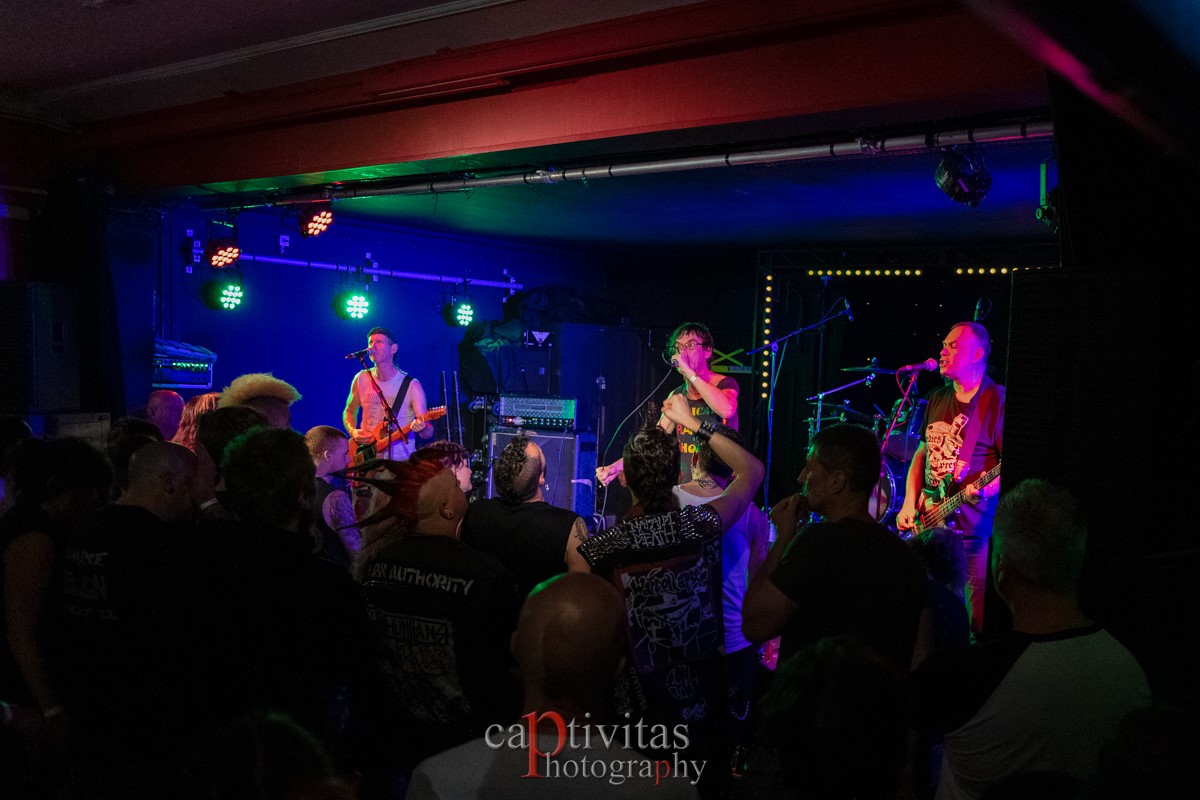 The mosh pit by the end of the evening was now in full swing. Bodies were strewn across the ‘dance’ floor (no dancing here Missus), resulting in at least 2 injuries we saw – hope the young girl who had dared the pit for the first time was ok; punched in the mouth – and the young man who leapt about to his favourite track (‘Apathy’) until the back of his head said hello to the stage edge…you really did need stitches. No harm done, and it’s good to see the friendly rivalry between moshers and camaraderie of picking each other up. 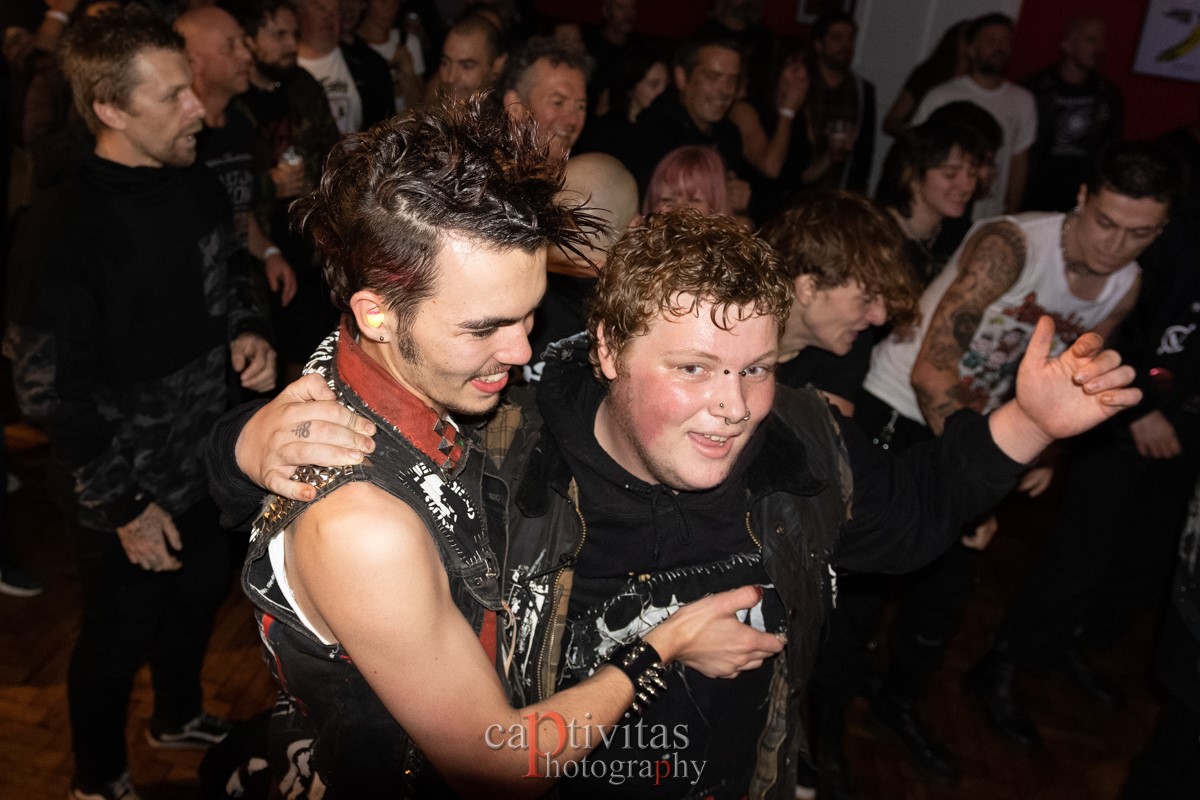 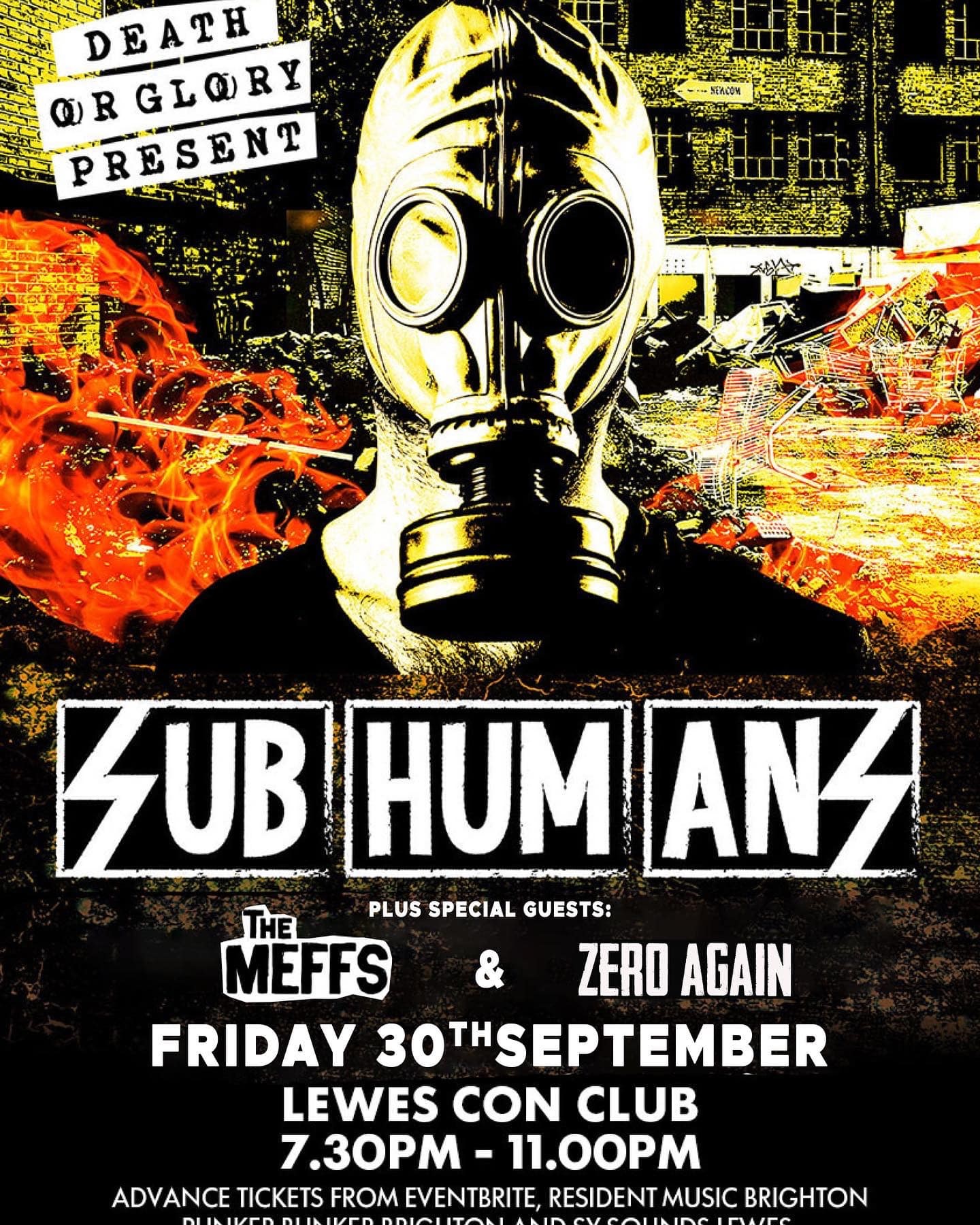 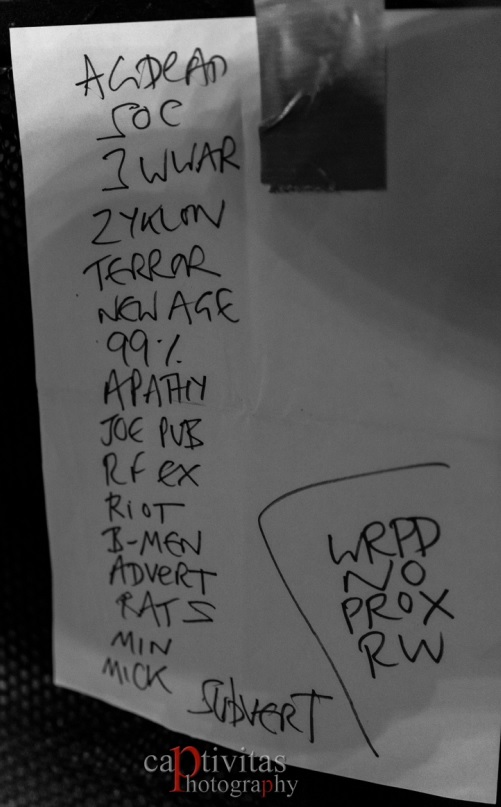 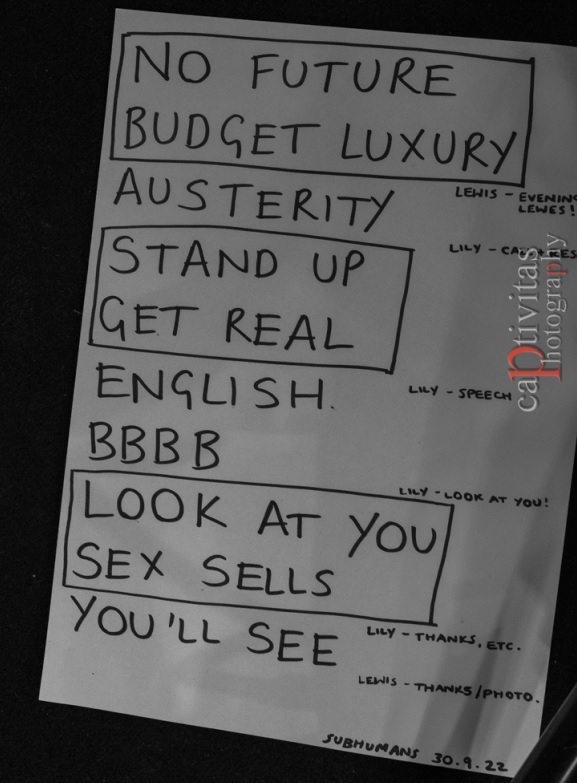 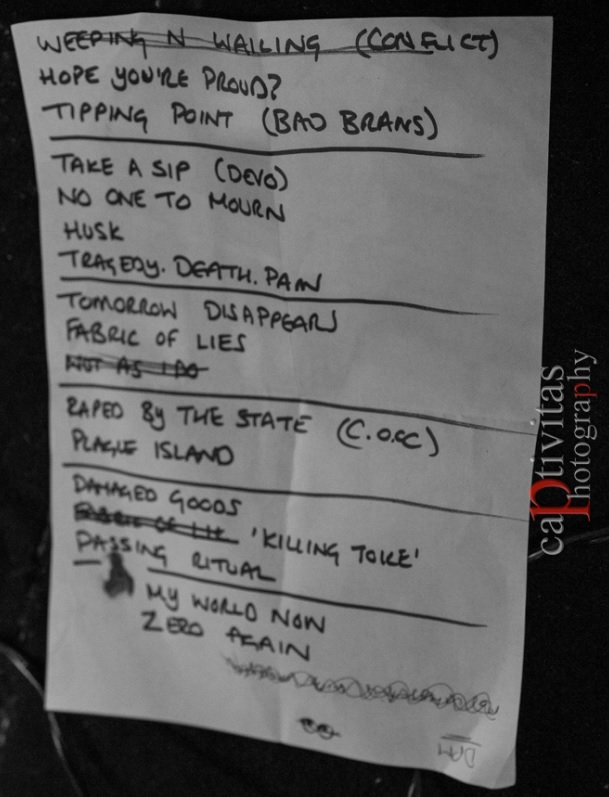