The first speaker was Brighton Pavilion candidate Solomon Curtis, who said that people had empowered politics. It was the Labour Party, he said, that would form a strong and stable government, with less austerity, more teachers, more nurses and a future for young people.

He said: “Come home. Come back to Labour. It has always been the people in the Labour Party that make it great … If you want to live next to a black person, vote Labour.”

Mr Curtis said he was feeling the spirit of 1945 and rallied the crowds with the words: “Brighton, solidarity!”

Brighton Kemptown candidate, Lloyd Russell-Moyle, took to the stage next and predicted a Labour victory in the constituency.

He said that Labour must save the NHS in Brighton which is in special measures. He said that healthcare must be free at the point of delivery and private companies should be kicked out.

He criticised cuts to school budgets which affected special needs children and a predominantly female workforce. Mr Russell-Moyle said that 10 per cent of Brighton and Hove’s population were on a housing waiting list and the city had the second highest homeless population in Britain. Labour has promised to build a million council houses across the country.

He said that there was a simple choice: a Britain spiralling into despair or a Britain with an economy that grows not just for the very rich but for everyone. He urged supporters to spend today and tomorrow (polling day) with their Labour family.

First-time voter Farah Alice Black spoke. She became interested in politics, she said, after her youth centre came under threat of closure.

She said: “We will not let Theresa May be the Mrs Thatcher of my generation.”

She said that she would be voting for Jeremy Corbyn and encouraged supporters to take heart that they have, in Mr Corbyn, a politician for the people even if the TV and media hated him. 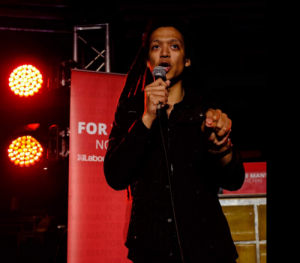 Solomon Curtis speaks at the rally in Brighton

Shadow International Trade Secretary Barry Gardiner said in response to recent terror attacks: “We are united in solidarity, love, love for life and nowhere expresses that better than Brighton.

“Brighton knows about solidarity, coming together of people of all genders, races, colours, religions, gay, transsexual and straight people.”

He criticised Mrs May for pitting the young against the old and for promoting tax giveaways for the richest.

Mr Corbyn urged voters to vote Labour because the party would fight for an NHS free at the point of use, which was a fundamental human right, address unrequited ambition in young people by empowering them and reduce the great gap between rich and poor.

A retired head teacher from Comart in Whitehawk and the founder of the “teach a friend to read” campaign said: “Like all my friends and anybody I am close to, like anyone who cares about society and future of the planet, we’re all passionate about Jeremy Corbyn and his team.

“He is gaining power to make the world a better place. If the Tories win the election, it doesn’t matter because young people will just take over, having all the brainpower, IT and heart at their disposal. Either way, now is our time and our moment. The good guys are going to win.”

While the rally was mainly Labour Party members, some people were voting tactically.

Bethan Hudson, 23, supports the progressive alliance. She is training as a counsellor and working full-time. She said Mr Corbyn had a very different outlook and his approach with a costed manifesto compared well to the Conservative one which, she said, just supported the wealthy.

She said: “Prime Minister Theresa May going back on the dementia tax and social care shows how her government is not strong or stable.”

David Hudson, a videographer, said that he would be voting for the Green Party because he lived in Brighton Pavilion. He said: “That is not to say I don’t wholeheartedly support Jeremy. I support the Labour Party and specific politicians. The Greens have fantastic policies. If there is a hung parliament, the Green Party have much in line with Labour and their manifesto.”

Sophie White, from Hove, said that she would vote for Labour candidate Peter Kyle, who won the seat in 2015 against the national swing to the Tories.

She said, in Hove, Labour had the best chance of being re-elected. She said: “I like the Green Party and their values but I also support Labour so they have got my vote.”