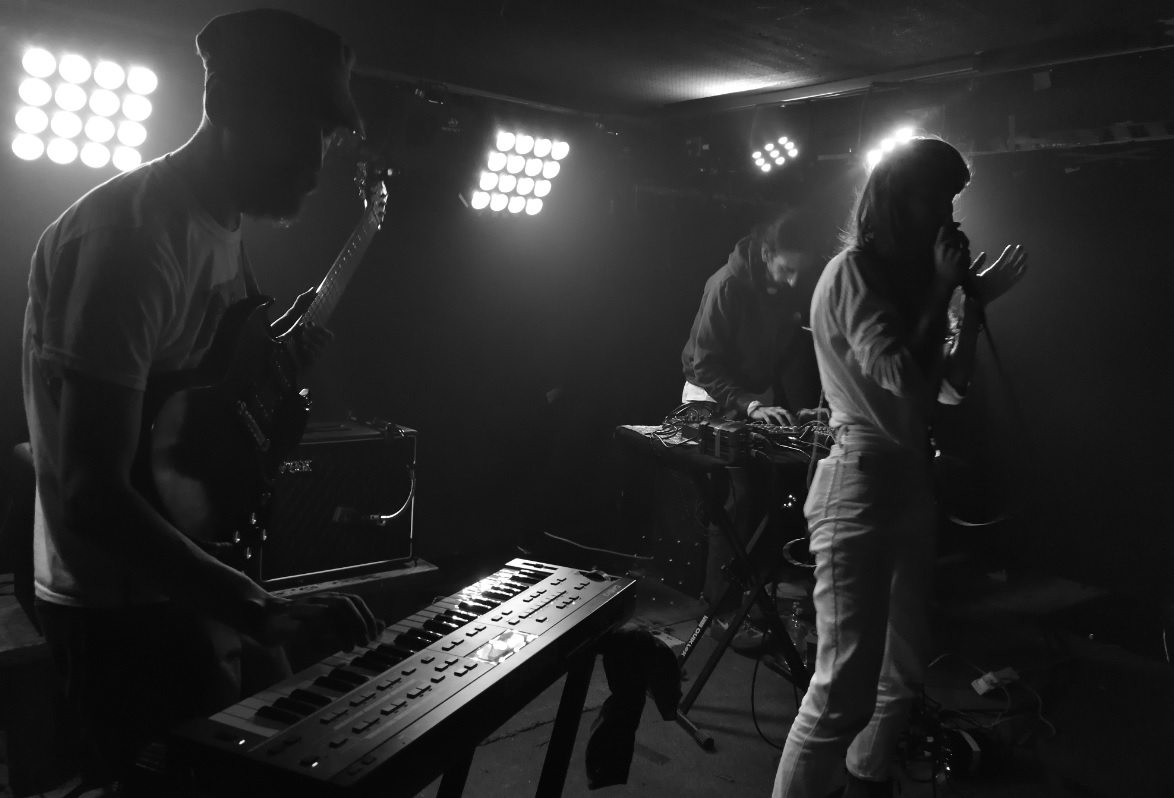 So far this year we have reviewed in excess of 50 local concerts (and we’re only in mid-May) and I have to say that Pinkshinyultrablast’s Sticky Mike’s gig is right up there at the top with the best of them!

To be honest, just prior to the gig I was feeling a little below par and jaded, which is unusual for a Friday night. We ambled to the venue located in Middle Street, Brighton and ventured downstairs with our pints of ‘Ripper’, swung open the doors and it was virtually deserted. Oh, not a good sign me thinks! 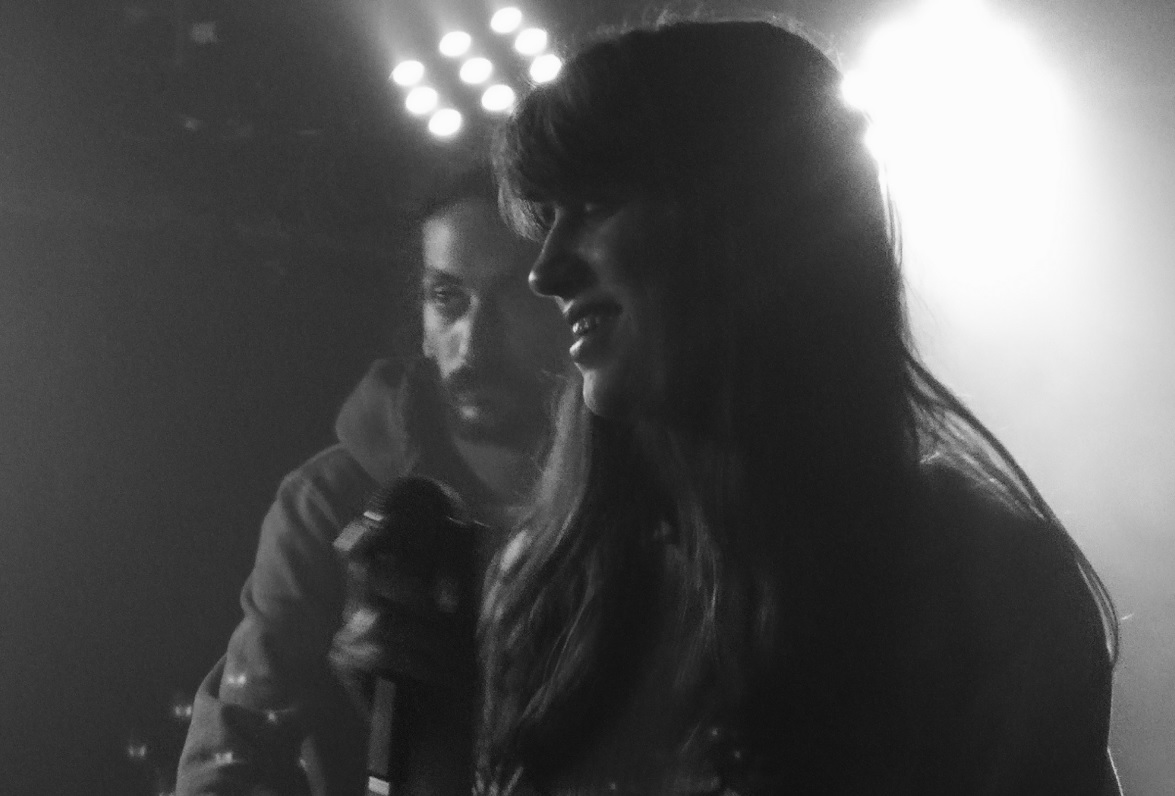 Slowly but surely the entrance doors kept swinging open as more and more punters kept coming in. Hold on a minute, it’s getting crammed in here, I think it’s sold out. That will make for a great atmosphere.

After a short while the three geezers that had been sitting next to us upstairs took to the stage, they were the support act. They were Is Bliss, who hail from along the coast in Portsmouth. Is Bliss are Jimmy Stuart, Dean Edwards and Sam Speakman and it seems they are also signed to the Club AC30 label which Pinkshinyultrablast are on. 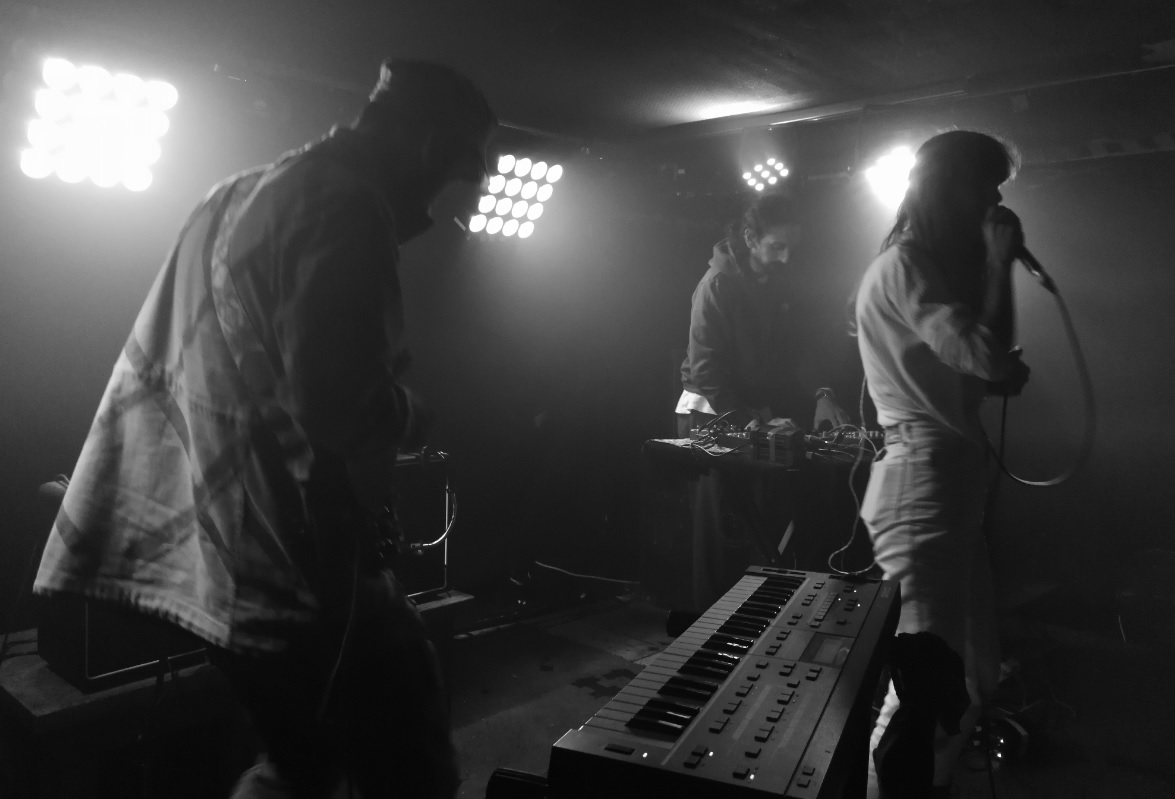 For those of you that haven’t heard of Pinkshinyultrablast, they are surprisingly out of St Petersburg on the Baltic Sea in Russia. I was under the impression that tonight they were to be a 5-piece band made up of female singer Lyubov Soloveva on vocals, and four chaps Igor on bass, Roman on guitar, Rustam on synths and Sergey on drums. However, this evening, they were a paired down version with no sign of Igor or Sergey. Not sure if that’s the 2018 lineup or whether the others didn’t travel to the UK.

They acquired their unusual band name from Scott Cortez’s American shoegaze project, Astrobrite, who released an album entitled ‘Pinkshinyultrablast’ a dozen or so years ago. 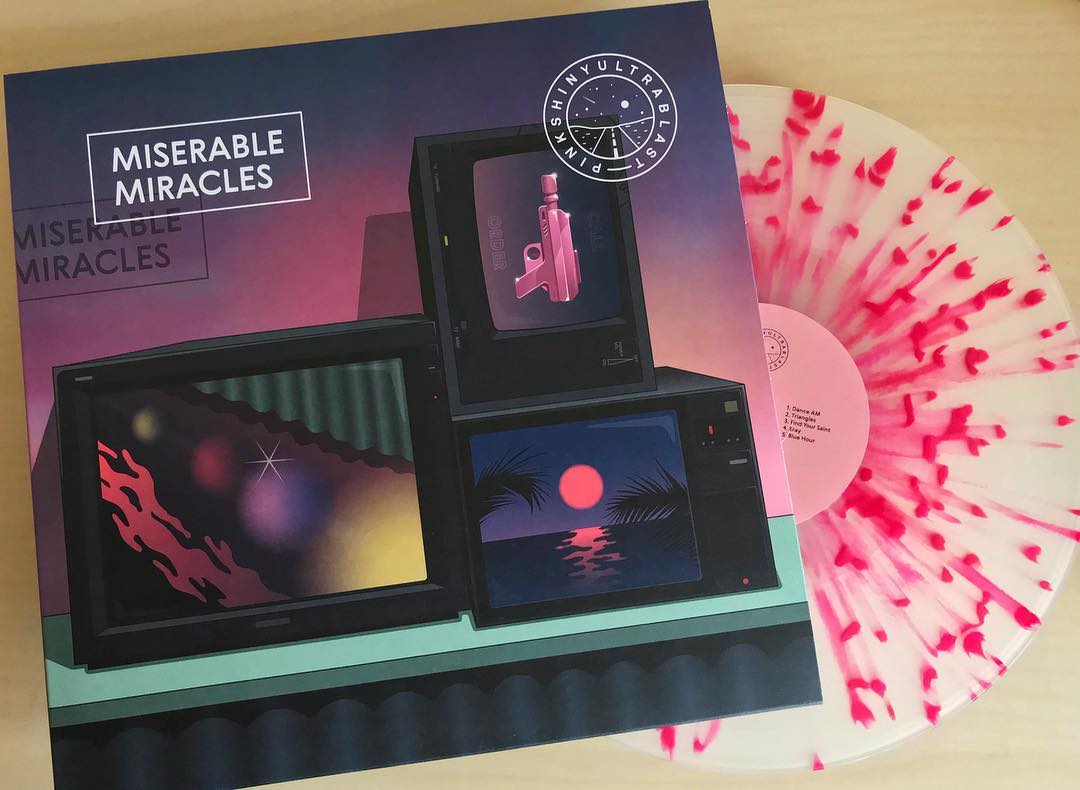 Russia’s finest export themselves unleashed the third album ‘Miserable Miracles’ (after 2016’s ‘Grandfeathered’ and 2015’s ‘Everything Else Matters’) and were touring this country in order to promote it. The guys are rather fond of releasing colourful vinyl releases and the new nine track platter is no different.

The Sticky Mike’s punters were, as it turned out, in for a super treat tonight. From the very off Lyubov, Rustam and Roman were well on the ball. They had obviously had a dry run the night before at London’s Tufnell Park Dome, as they were using the same setlists tonight. Although it transpired that sadly this evening they ran out of time and had to drop the proposed encore track ‘Tropical’. 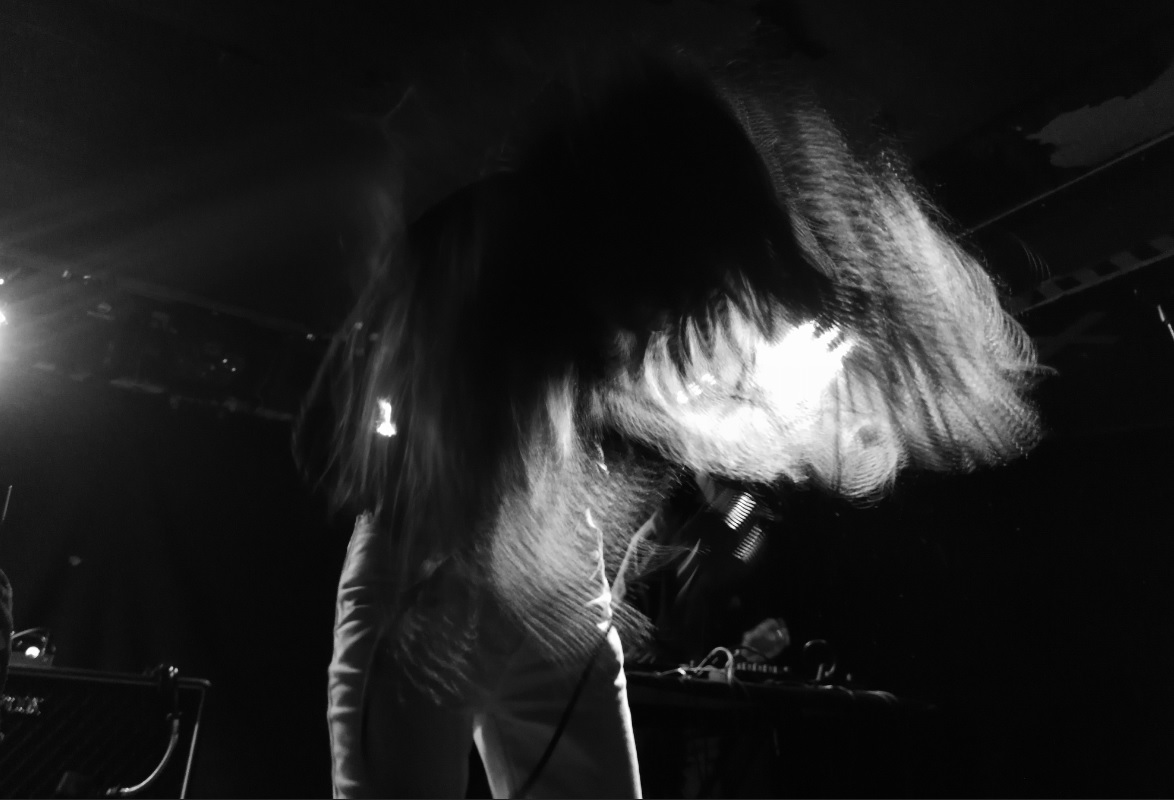 Lyubov Soloveva of Pinkshinyultrablast getting into the vibe at Sticky Mike’s Frog Bar, Brighton 11.5.18

Svelte Lyubov (who incidentally has relocated to LA according to the guys after the show) really feels the music through her body, especially her dancing shoulders, and she moves in time with the hypnotic trance-like icy synth and echoey reverb guitar work. The crowd were on board from the very off, with the new album’s uplifting opener ‘Dance AM’ getting the ball rolling. Before long we were onto the terrific ‘Umi’ from the 2015 album. 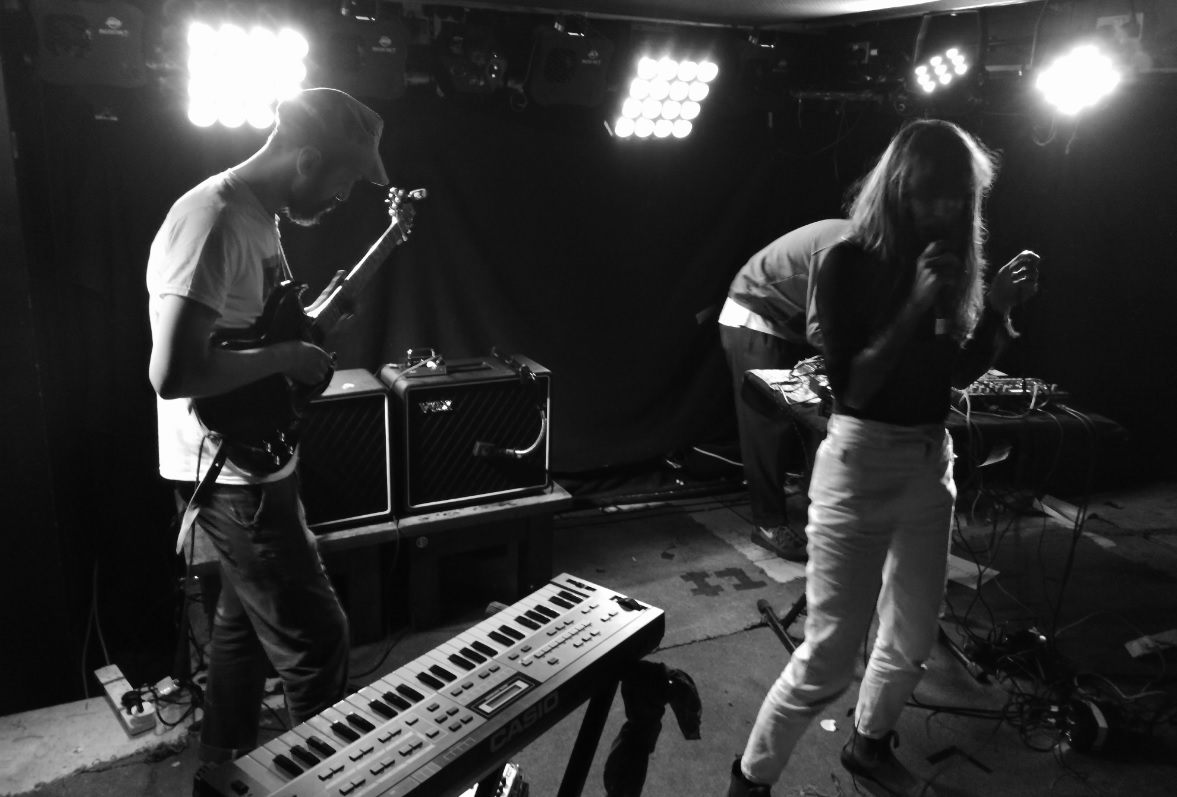 The band were in Brighton almost exactly three years ago, when they were performing at The Great Escape at the Black Lion pub on Saturday 16th May 2015. This years Great Escape is under a week away and the Brighton & Hove News will be there reporting on as many new decent acts as humanly possible. 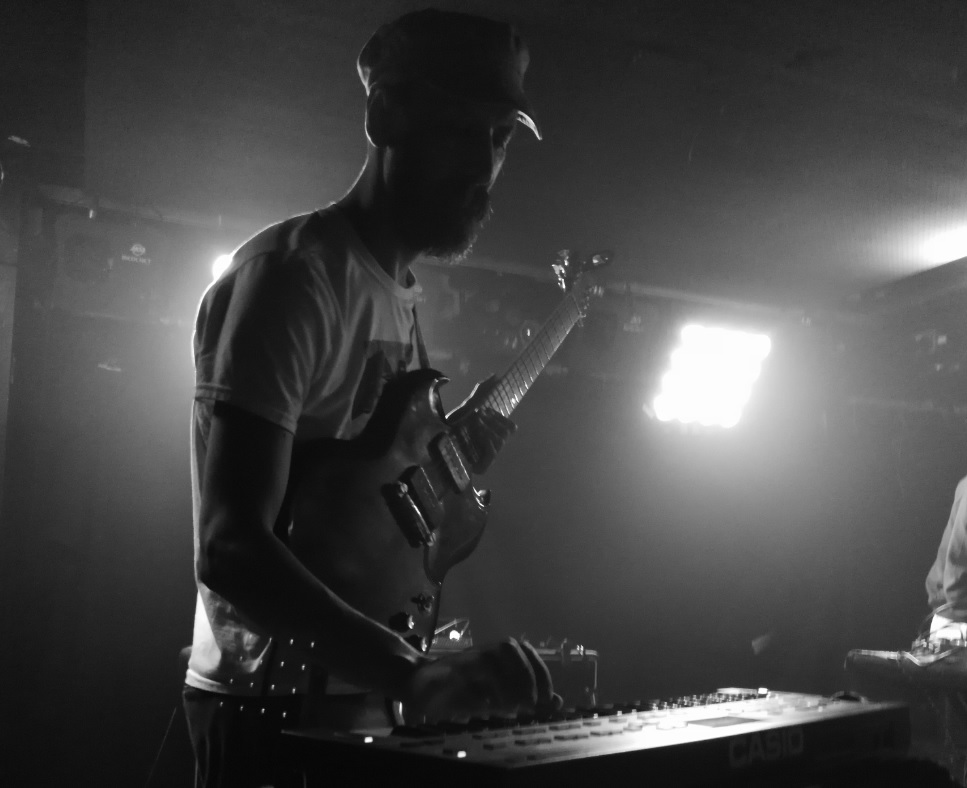 Tonight, Pinkshinyultrablast treated us lot to eleven chunks of career spanning supreme indie-music, including thankfully my fave track of theirs ‘Metamorphosis’. The full-house crowd all truly appreciated their set, despite the loveliness of Lyubov’s vocals being a little lost in the mix, but hey, it could just have been the boys getting overexcited.

So I would suggest that if you are partial to Slowdive, the Cocteau Twins, The Cure, jangly guitars or electro-shoegaze in general then ‘the pinks’ are for you. They certainly were on scintillating form for me, as I purchased both albums that they had on sale and have the other on order from a well-known trading website. I need Pinkshinyultrablast in my life and after the show I politely recommended that they return to Brighton again very soon! (see below) Let’s hope that they do. 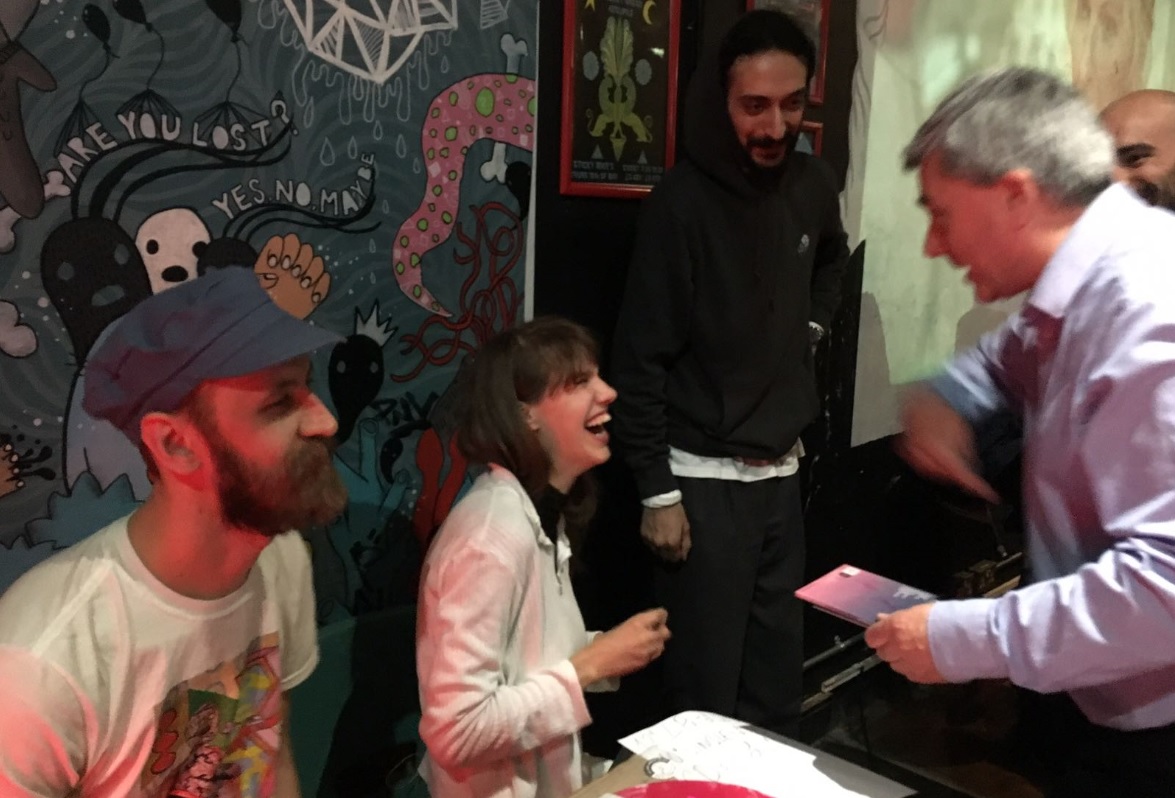 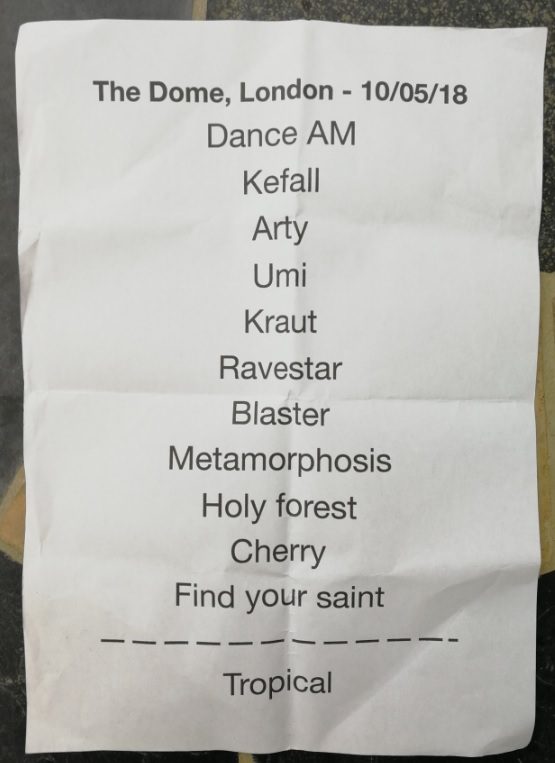 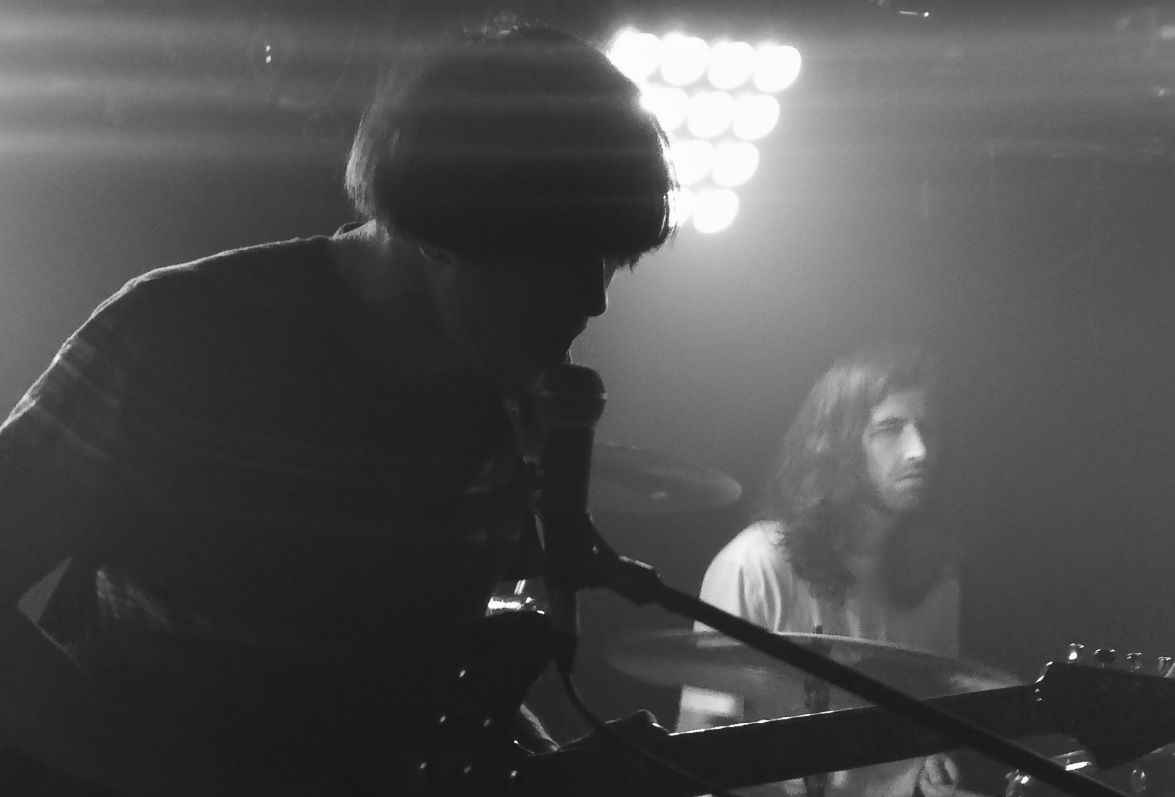 Now back to Is Bliss………….I immediately noted the unusual microphone position at the start of the Is Bliss set. It looked weird sticking up like an ice cream in a cone being held aloft by an eager child, but when you think about it, it is highly logical (Mr Spock).

Their set started pleasantly enough and then after about 20 seconds BANG! We were hit by a wall of noise. Christ this is great. Immediately I was feeling much less jaded. Music had yet again worked wonders on me. 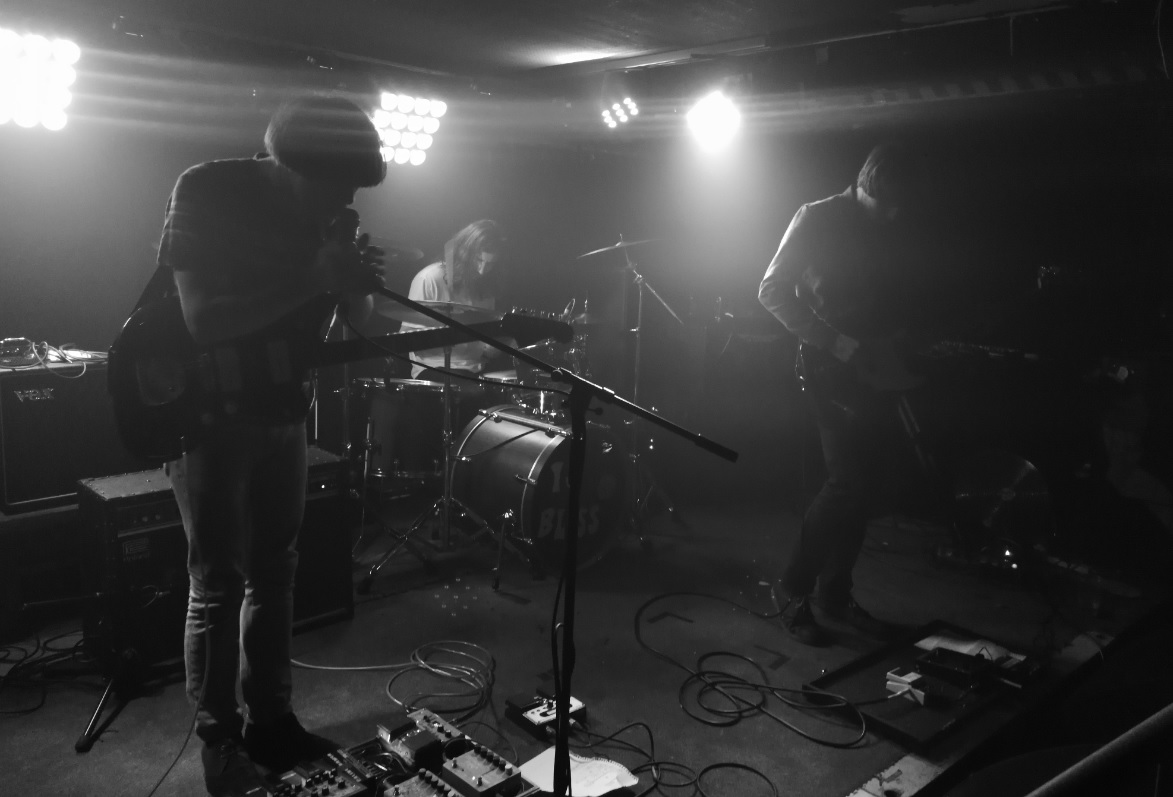 The guys worked their way through a really decent six song set, which doesn’t sound very long, but their compositions aren’t exactly three minute wonders. During their powerful indie shoegaze/1990’s Happy Monday’s rave set, I was asking myself ‘How come these geezers aren’t from MADchester?’ and more importantly ‘How come they haven’t broken through big time yet?’.

The nearest thing locally (as in Brighton) that I could compare them with is the now sadly defunct Morning Smoke. They both have/had captivating stage presence, whilst trapping their audience within a whirling barrage of noise – there’s no escaping you know!

So to sum up Is Bliss, it’s ‘Music To Annoy The Neighbours To!’ There you go lads, that the title of your debut album sorted out, that should hopefully be seeing the light of day later this year. Is Bliss – a band whose incendiary live performance you MUST witness! Here is a band to look out for if you enjoy psychedelia and indie-rock. 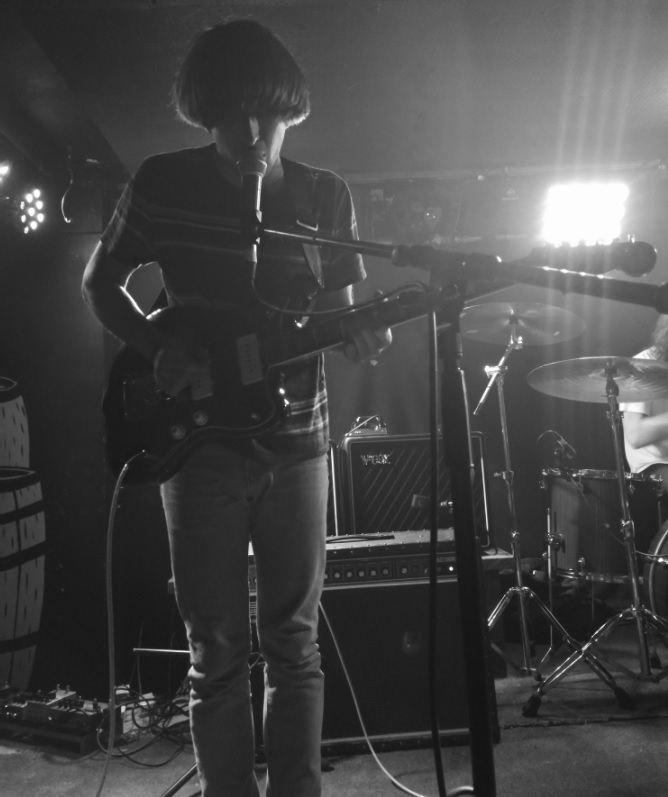 Got The Beatles ‘White Album’ in your record collection? Do you own ‘Definitely Maybe’ and ‘(What’s The Story) Morning Glory?’ or maybe rather partial to The Horrors, The Stone Roses, The Charlatans, Primal Scream and the Happy Mondays? Then you need to check Is Bliss out! I personally have purchased their 3 releases on iTunes off of the back of tonight’s performance!

Sad that you missed them in Brighton? Worry not, as they are hurtling back along the M27/A27 again on Saturday 9th June as they are appearing at the Green Door Store as part of the ‘Utopia All Dayer’ – grab your tickets HERE. 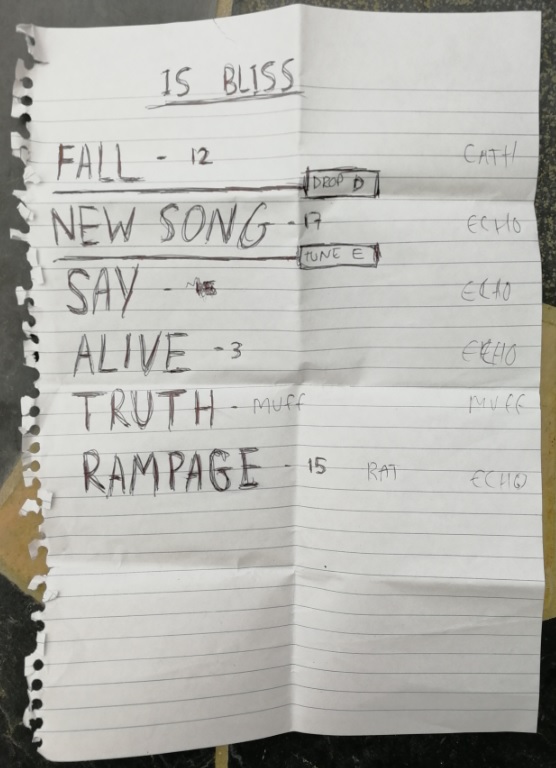 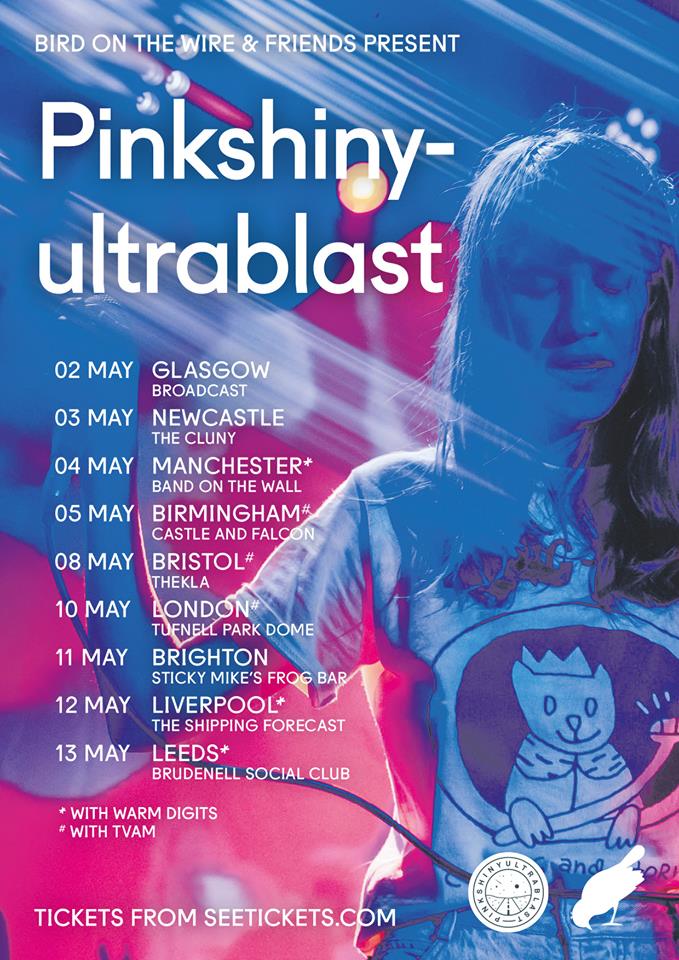 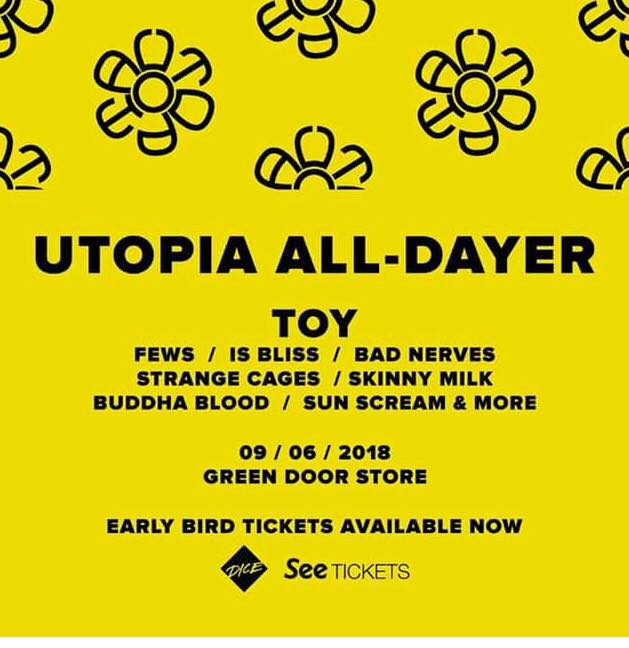 Catch Is Bliss next in Brighton here 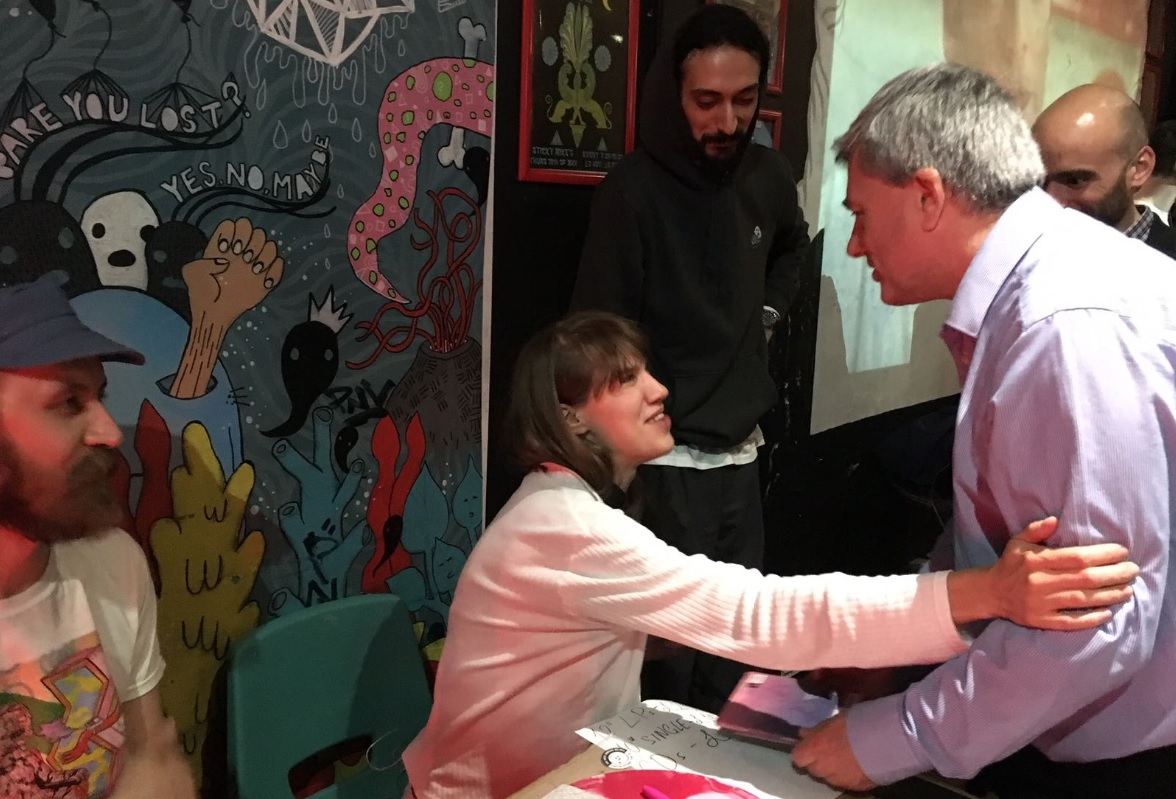 Improving Russian and British cultural relationships – now over to the respective Governments to do the same!

If you enjoy synth music like the Pinkshinyultrablast, then the chances are that you will also enjoy the bands listed below. Simply click on each of the names and they will take you to our concert reviews on those bands: