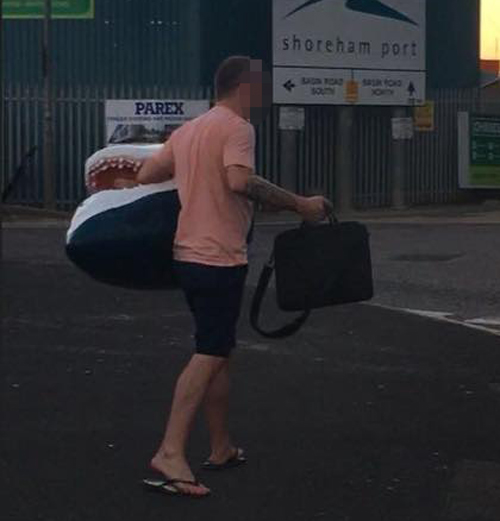 A couple who were caught on camera taking a plastic shark’s head from Hove Lagoon say it was just a prank – but unimpressed police officers have asked him to comb the seafront where it was dumped.

Two quick-thinking children caught the man on camera carrying the head as he left the lagoon with a woman and the picture was widely circulated on social media.

Today, police said they had traced the man, who admitted taking it – and that he has offered to compensate Heals Brothers, from whom it was stolen.

But officers also want him to try and find the head so it can be returned.

Jamie Heal said: “It was really disappointing. We’ve had the shark’s head three years and we are hoping to get it back.”

A police spokeswoman said: “Police received a report that a plastic shark’s head had been stolen from Hove Lagoon in the Kingsway on Friday night (29 June).

“The suspect has been traced and admitted taking it as a prank. He said he abandoned it along the seafront. He has agreed to compensate the owner and apologise and officers have asked him to try and find the shark’s head.”

Ward councillor Robert Nemeth said: “I have said to the mum of the young brother and sister who confronted the pair just how grateful I am for their service to the community. If people don’t stand up to criminals, they will get away with it.

“I am delighted that the matter is now on its way to being resolved.

“We have a wider problem generally of thefts and vandalism in West Hove, which could be solved if liberal policing policies were abandoned. With the recent beach hut break-ins and constant seafront drug use in mind, I will continue to press for a tougher approach.”