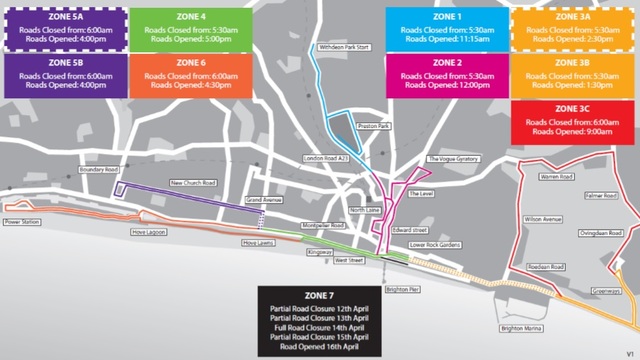 The route for the new Brighton Marathon 50km bike ride has been revealed.

Hundreds of cyclists are expected to join in the early morning event which for the majority of its route uses existing marathon road closures.

An extra circuit takes riders heading up through Ovingdean to Falmer Road, then to Woodingdean and west along Warren Road before they return to the coast road via Wilson Avenue and Rottingdean Way.

Riders will start and finish at Hove Lawns, setting off at around 7am, before the BM10K and marathon runners.

In its report to Brighton and Hove City Council the Brighton Marathon said: “Running can be a daunting prospect for those with a basic level of fitness or with specific injuries that prevent them from training for a 10km or marathon.

“A cycling event of 50km provides an opportunity for these people to complete a realistic and manageable challenge.”

Around 1,500 are expected to take part in the cycle ride .

Plans going before the Tourism, Development and Culture Committee on Thursday 22 November show a road-sharing plan through Ovingdean with a coned-off lane for cyclists as they leave the marathon route.

Stop/go boards are planned for junctions along Falmer Road.

The last rider is expected to be through the Warren Road, Woodingdean, stage of the cyclists only route along by 8.35am on marathon morning,

During marathon day on Sunday 14 April, the 12, 14, 22 and 27 bus services are all on diversions while the 2 service is suspended until 1pm.

The Tourism, Development and Culture Committee is discussing the bike ride plans in public at its meeting on Thursday 22 November at Hove Town Hall from 4pm.