Parents and neighbours wrangle over forest school in Portslade

A forest school for young children has become the subject of a battle between parents and neighbours in the comments section of the council’s website.

Bee in the Woods is applying for planning permission from Brighton and Hove City Council to operate as a full-time nursery school.

The owner Lucy Collins took over the land in Portslade from the Wildlife Trust two years ago.

She removed the equivalent of three lorries full of fly-tipped rubbish.

The nursery, at the Foredown Allotments, in Thornbush Crescent, Portslade, is currently open for three days a week.

But she stopped holding monthly family forest school events at weekends after receiving complaints about noise.

Now she has applied for planning permission to change the use from allotment to educational space. She also wants to be allowed to have a shed for storage and a child-friendly composting toilet.

The school operates three days a week, with six under-fives on Tuesdays and Thursdays and 11 on Wednesdays.

One neighbour complained about noise from one weekend event at the site as well as on-going noise.

On the council website one objector wrote: “I cannot relax now in peace and quiet in my home or garden.

“How am I meant to sleep? I’m a shift worker and sleep from 8am until 1pm when I am able to have quiet, which doesn’t happen now.”

One letter said that there were now more rats in the area and an increase in great crested newts escaping the pond. 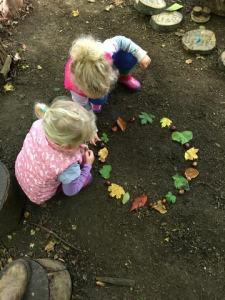 Another neighbour was not against the school but was concerned about increased traffic and the impact on wildlife in the area.

They also complained about noise from a previous event, saying: “I do strongly object to the use of the area at weekends for family fun days and children’s parties.

“Such activities which have been happening in the past few months have caused noise pollution to a normally quiet residential area and this sort of activity is not normally associated with schools.

“No reference is made on the application form to Sunday use. However, there have been occasions when this school has used the site on a Sunday, namely a theatre school playing loud music from 8.30am in the morning which I find totally unacceptable.”

The council’s parks and gardens department has also raised concerns about noise, parking and allotment rules, such as closing the gates, being ignored.

Forest schools have become fashionable in education, with children spending their time outside and learning about and from nature.

One parent wrote: “The pre-school will be a huge asset to Brighton and Hove and we should all be doing our utmost to support such amazing outdoor education provision.

“Evidence demonstrates that encouraging children to play and learn outside is so beneficial for their development and wellbeing yet many spend less than an hour a day outside.”

Another said: “I have seen first hand the care, attention and planning that has gone into the site and the constant attempts to adapt that practice to accommodate the requests of local residents.

“I hope that the impact on young people’s lives this project will have in the long term is weighed heavily as part of this consultation process because the loss of this project would be terrible and wound the local community deeply.”

In response to complaints Mrs Collins held her hands up to errors made, describing the musical event with a speaker as a “one off” and a “mistake”.

Mrs Collins said that she had invited neighbours to visit and come along to open days but no one had taken her up on the offer.

She said: “I’ve tried to be as open as I can be to invite people along. I’ve knocked on doors and spoken to people and asked them to talk to me if they have an issue.

“I heard nothing but then saw complaints on the planning application.”

Details of the application can be seen by searching for BH2018/02440 on the planning pages of the council’s website.