A homeless shelter volunteer has publicly thanked dozens of people working in kitchens in hotels and restaurants across Brighton and Hove for stepping in over the festive season. 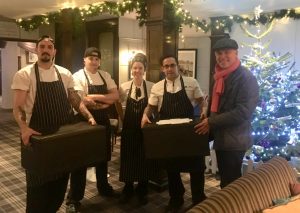 Garry Morrill praised the owners, chefs and others who gave up their time and food to support those who were staying in the winter night shelter in the Syndicate Wing at the Brighton Centre.

They also served up meals for people at the Severe Weather Emergency Project (SWEP) in the nearby Wagner Hall.

The premises became vacant after the collapse of a local community interest company (CIC) called The Platform, formerly known as Care Co-operatives – or Care Co-ops.

Mr Morrill said: “I’m only a volunteer. I started approaching companies and shops and restaurants and hotels and everyone wanted to embrace it.

“The Old Ship did four days of dinners over Christmas. The Grand hotel has been fantastic and the Hilton Metropole are doing the new year.

“Guests are staying at the Brighton Centre Syndicate Wing because they’re treated with respect. It’s not ideal.

“And I just wanted to say thank you to all these people and companies. When I go and collect the food, the chefs are wonderful.”

Apart from the three seafront hotels, help has come from a number of “Made in Brighton” businesses, including Sahara restaurant on Christmas Day.

They include Wolfies and Bardsleys fish and chip shops, BeFries, Troll Burger, Pizzaface, the Garden Café at St Ann’s Well, the Friends First café, the Real Patisserie and the Flower Pot Bakery.

Others include the Piquant Pavilion, Franco Manca, Moreish, Nisbets catering equipment, the Friends First Trust and Peacehaven Catholic Church (the Immaculate Conception of Our Lady).

And Anthony Harris, of Bridgers Farm, in Hurstpierpoint, donated the turkeys used to cook the Christmas lunches and dinners. 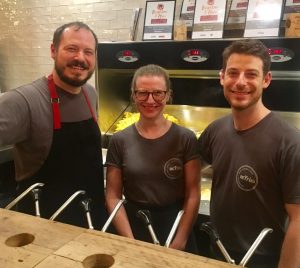 Mr Morrill said that up to 30 guests a night had been staying at the Brighton Centre Winter Night Shelter and 25 more at the SWEP in the Wagner Hall.

But with no cooking facilities at the Brighton Centre shelter, Sarah Betts and her volunteer team from the Real Junk Food Project provided more than 300 Christmas lunches over the festive season.

Mr Morrill, 58, a Brighton-born online bookmaker and currency trader, became involved six years ago with the Brighton and Hove Churches Winter Night Shelter, which started in 2011.

A roster of local churches take turns hosting homeless people overnight, with a warm meal each night and breakfast in the morning.

Mr Morrill praised the way that the Brighton Centre night shelter had been used as a way of helping people off the streets, adding: “During the period that the shelter was open last year, 50 people were housed.

“They’re warm and dry, they’ve eaten and they’ve got a clear head.”

In those circumstances, he said, it was easier to get them to think constructively about their future and co-operate with those who could help them.

Official reports by the council and health chiefs locally have suggested that the longer people stay on the streets, the more likely they are need to need more costly help, such as repeat treatment in the Royal Sussex County Hospital A&E (Accident and Emergency) Department.

Mr Morrill said that with all the local night shelters full each night that they’re been open this year, the number of meals donated by local restaurants and numbered in the thousands.

He said: “I just wanted to say thank you because they literally have been feeding the five thousand.”

Teenager dies after being hit by train in Brighton