Husan Haitov, the owner of Pizza Plus, in Beaconsfield Road, Brighton, did not attend the licensing panel hearing at Hove Town Hall, where the application was discussed.

He wanted a licence to deliver alcohol in addition to delivering food into the early hours.

Licensing officer Donna Lynsdale told the licensing panel – councillors Lynda Hyde, Amanda Knight and Mo Marsh – how she had explained the terms of the late-night refreshment licence when Mr Haitov took over Pizza Plus in May last year.

The takeaway, which opens at 4pm, can deliver food until 3am Monday to Saturday and 2am on Sunday.

The panel heard that the Pizza Plus website had said on its website that it was open until 4am Sunday to Thursday and 5am on Fridays and Saturdays, which would breach the terms of its licence.

Ms Lynsdale told the panel that after sending a warning letter in November, the times changed on the Pizza Plus website.

However, Ms Lynsdale checked the Pizza Plus listing on the food delivery website Just Eat and found that it was saying that it delivered until 5am daily.

Sussex Police licensing officer Mark Thorogood said that the force was concerned that the company could deliver to people in areas of Brighton and Hove where sales of alcohol are restricted – known as the “special stress area” and the “cumulative impact zone”.

He said: “There is also no confirmation of restrictions to deliveries in open spaces or children being around and linked to sales by proxy.”

“We are concerned about public safety due to intoxication or under-age drinking.

“This could put the drivers at risk of abuse and violence.

“They could force them to provide alcohol to under-age and intoxicated people or face repercussions if they don’t.” 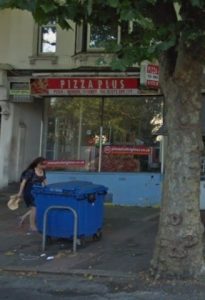 Mr Thorogood said that the force was also concerned about the ratio of food sales to alcohol as there were no details in the application.

Restaurants and cafés are required to sell substantial food with alcohol.

Councillor Hyde, who chaired the cross-party panel, said: “It is responsible not to be delivering to people already intoxicated.

In refusing the application the panel said that they shared the concerns of Sussex Police and licensing officials about the risk of delivering to open spaces, carrying out ID checks and ensuring alcohol was not provided to children.

The refusal notice said: “The applicant has continued to advertise hours in excess of his licence despite a warning letter.

“The panel therefore do not have confidence in his ability to promote the licensing objectives if this application was granted or in his ability to adhere to conditions appropriate to mitigate the risk of such an operation.

“The application is thus refused.”