A Brighton hotel has been granted a new drinks licence despite neighbours’ concerns.

Artist Residence, in Regency Square, said that it would work with neighbours – and this helped to sway Brighton and Hove licensing chiefs.

The hotel had relied on two previous licences covering the separate properties that were turned into one premises.

It came to the attention of Brighton and Hove City Council officials after promoting a pop-up “speak-easy” bar called Trashed Panda – now called the Sneaky Panda.

After officials carried out an inspection, the management were told that their licence did not cover this part of the building.

The new licence covers the entire premises and allows the hotel to open its bar to the public until midnight on Fridays and Saturdays.

Members of the Regency Square Area Society said that the hotel was a good neighbour, despite the 11 letters of objection to the extended hours.

At a council licensing panel hearing at Hove Town Hall on Monday 24 June, the hotel managers handed back a licence to have street tables and chairs.

The decisions was in response to neighbours’ complaints about noisy drinkers spilling on to the street.

Under the terms of the new licence, customers will not be allowed to leave the premises with a drink, even to smoke. A maximum of four smokers will be allowed outside each entrance after 7pm.

Other conditions include restricting the use of a courtyard area to 10 customers and closing it after 9pm.

In its decision, the panel, consisting of councillors Jackie O’Quinn, Dee Simson and Carmen Appich, said: “The members appreciated the removal of off sales from the application and the conditions put forward on the operating schedule. 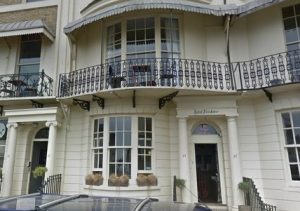 “They noted that live music and making music, currently permitted at 34 Regency Square, would no longer be part of the hotel’s operation.

“They also took into account the additional conditions that the applicant was prepared to accept.

“Restaurant conditions”, requiring people to have substantial food if they are drinking, will still apply to two rooms at the hotel.

In the casual dining area and lounge bar, the hotel must offer waitress service and no more than eight people can stand at the bar.