Plans to demolish three houses and build a block of flats on Hove seafront have been refused by councillors.

They voted seven to three against the application on the corner of Kingsway and Braemore Road.

The proposed 37 flats were in an eight-storey block, stepping down to five storeys.

Brighton and Hove City Council’s Planning Committee rejected the plans because the building was in front of the neighbouring houses and would be overbearing and overlook them.

Amy Urpi, whose home backs on to the seafront site, said that just six metres separated her home from the five stories at the back of the planned building.

Light would be lost from her family’s main living space in her house, even though the report described the side window as the kitchen.

She said: “My children play in the garden every day throughout the year.

“Building these flats will affect the health of my two small children as they will be playing next to a car park.”

The home of neighbour Wayne Coley, immediately to the west of the proposed flats, is currently attached to the existing house that was planned to be demolished.

The flats would be built forward of the front of his home which would result in seven floors of residents able to look into his house which would be in full shadow for half of the day.

Mr Coley told councillors that he had no information about how the back of his home would be left “hanging in the air”.

The committee was told that this was not a “planning consideration”.

“Now I would like evidence of how they are going to rebuild part of my house.” 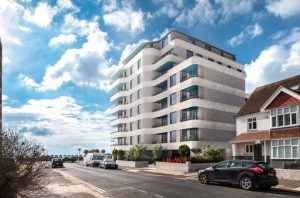 Councillor Nemeth was unhappy with the design and expressed concern about the small distances between the development and existing houses.

He also raised the issue of the lost gardens from the three family homes that would result in loss of wildlife habitat.

He said: “There could be living walls, bee bricks and swift boxes. Instead we get two car parks and token trees.”

Councillor Peltzer Dunn reminded the committee that planning officers had described the development as “overbearing” in the report.

Agenda Homes chief executive Jamie Barratt told councillors that his company had carried out extensive pre-application work, consulting with neighbours since starting the planning process in 2017.

Conservative councillor Dee Simson said: “The design is very nice. I like it.

“I am really concerned about the overall effect on the street scene by it being next to two completely different houses.”

She voted against the application.

Green councillor Phélim Mac Cafferty did not see the building line as an issue but said that he understood the impact on the neighbours.

He voted in favour of it, along with councillors Tracey Hill and Siriol Hugh-Jones.