Bad Manners? It would be rude not to… 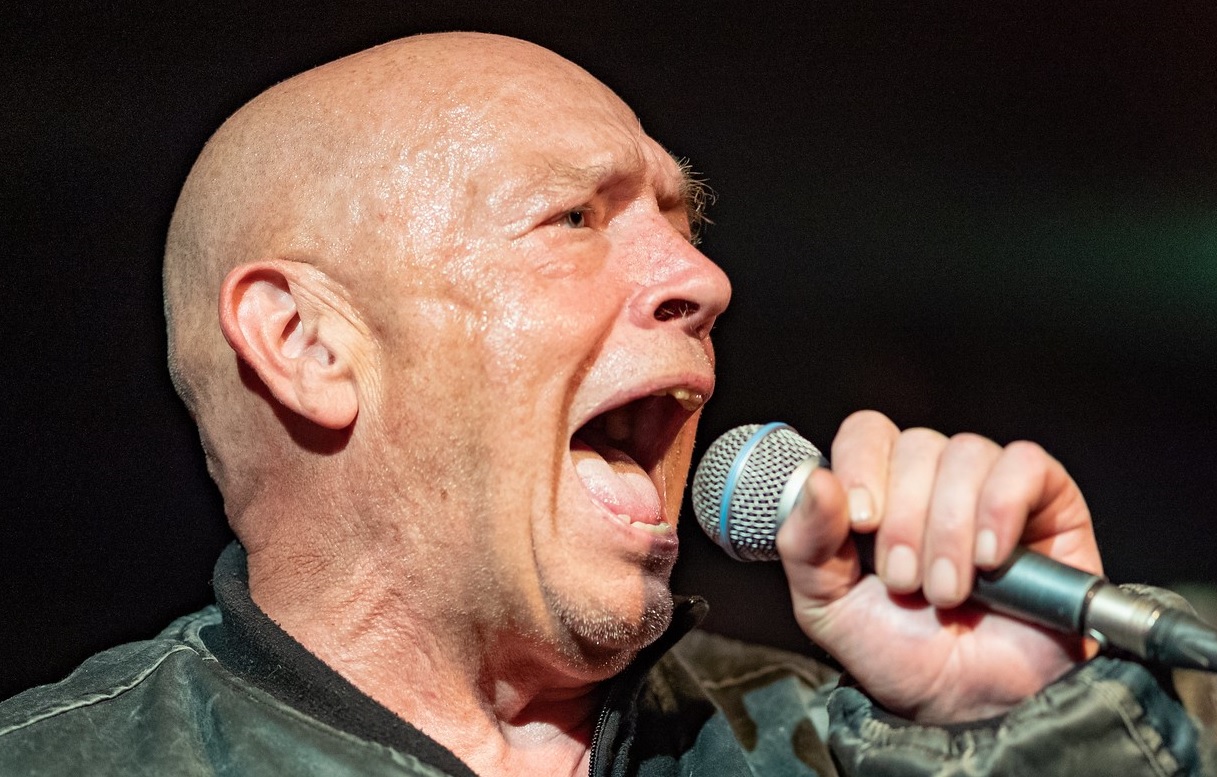 If you remember, or are aware of, the ska revival of the early 1980’s, you’ll be familiar with Bad Manners. Between 1980 and 1983 they had nine singles and three albums in the Top 40 of the charts. Their bouncy, fun and irreverent brand of ska pop had a broad appeal, and they were instantly recognisable by the cartoon-like figure of charismatic and physically massive frontman Buster Bloodvessel, from whose bald head poked an unfeasibly large tongue.

The hits dried up eventually, and the original band members went their separate ways, but Buster Bloodvessel has continued to record and tour with Bad Manners to this day. Nine studio albums have been completed in all, and the band has become a perennial live favourite, whose energetic and entertaining show is eagerly anticipated wherever they go. Tonight they are at The Con Club in Lewes, courtesy of local promoters The Big Blue Shed, who continue to attract top names to this excellent venue. I’m certainly looking forward to tonight’s bill. 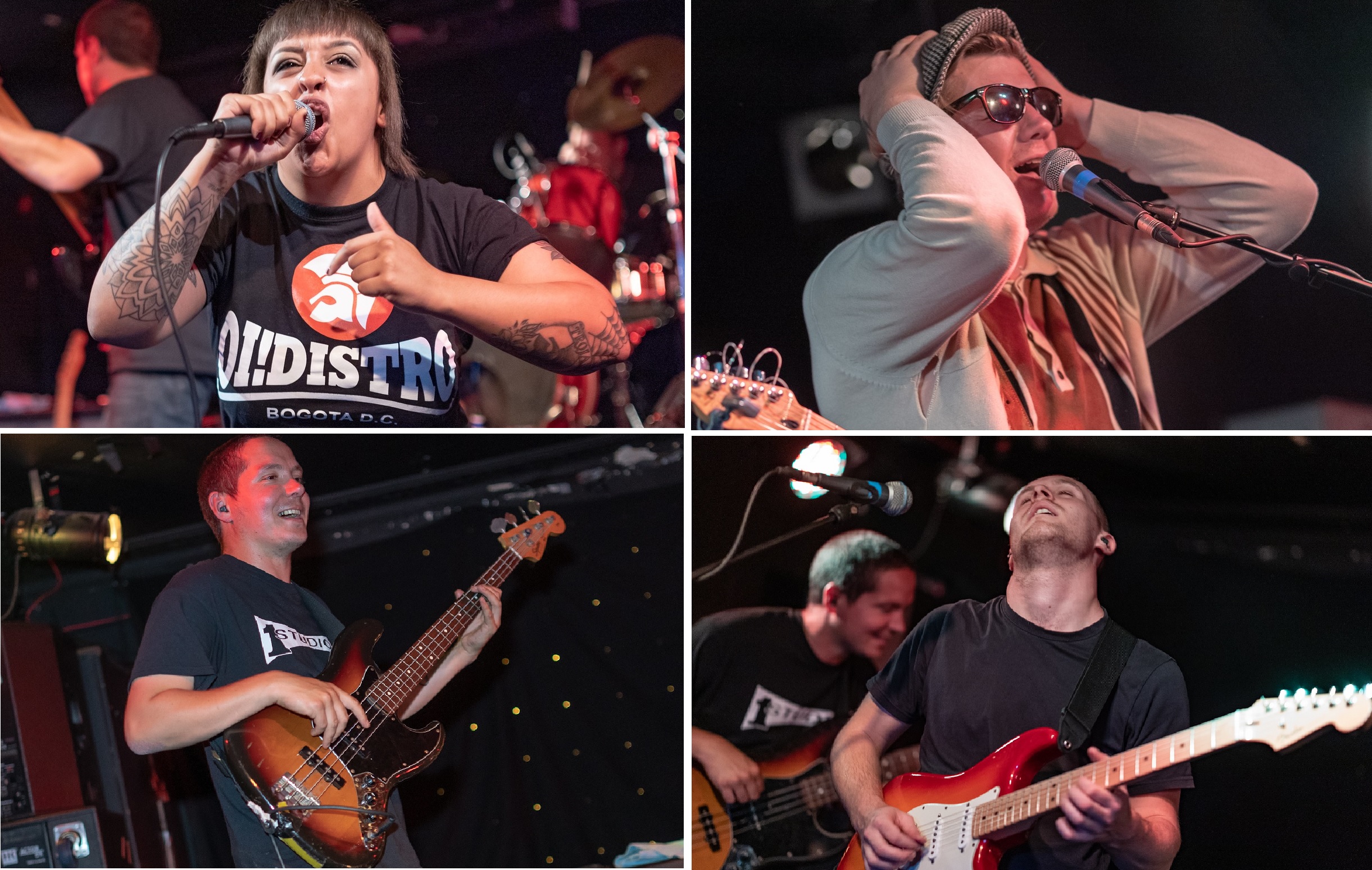 First up are Brighton five-piece Dakka Skanks. They are a young band, whose style choices set out their stall straight away, with vocalist Clara Byrne sporting a ‘skinhead girl’ haircut, and the band bouncing in brogues and Dr Martens. Their songs are well crafted with interesting changes of rhythm between ska and dub reggae, and plenty of catchy hooks. Rob Bligh’s bass lines lilt up and down the fretboard, and drummer Henry Pascoe-Smith injects some snappy reggae fills whilst giving it plenty of power round the toms. Guitarist Connor Jackaman looks sharp on stage, with close cropped hair, and his lead breaks are pretty cutting too. Rhythm guitarist Josh Bowes thrashes a left handed Telecaster through an old Watkins Electrical Music combo, which makes me feel nostalgic as my first amp 40 years ago was a similar model.

Josh shares vocal duties with Clara, and he has an impressive line in grime style rapping, which blends rather well with the classic Jamaican dance vibe. I have to say this band had me hooked from the first number ‘Dakka! Dakka!’, with the combination of grime and ska working brilliantly. Second number ‘Ska Rhythms’ is in a similar vein. On the bouncy but wistful ‘Money’, Josh takes the lead vocal whilst Clara plays melodica, which adds another interesting element, especially in the dub style breakdown. The reggae feel continues through the opening of ‘Up And Down Alan’, though a snappy switch to a ska beat lifts the chorus nicely. It’s a neat trick.

The band members seem very much at ease on stage, and look like they’re having a great time. They are confident enough to work the crowd a bit during ‘Revolution’, and elicit a positive response. They have landed some impressive support slots so far, including this one, and on the strength of tonight’s performance, it’s easy to imagine them one day becoming a draw in their own right. 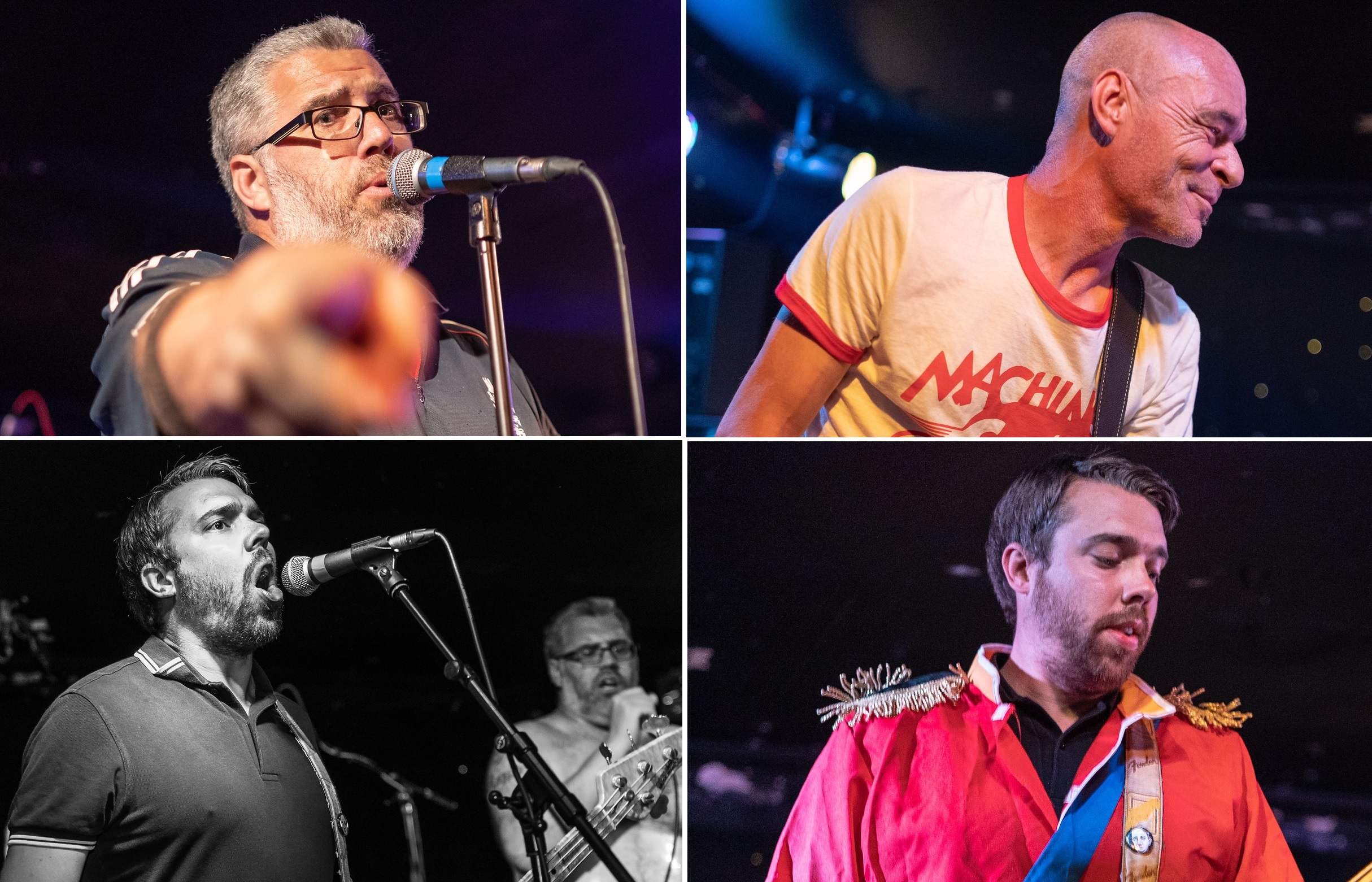 Next are The Fish Brothers. They are well known, if not notorious, in the Brighton area, having been gigging regularly since the early 1990’s. They describe themselves as a cross between music hall and punk rock, and that’s pretty much what you get. Frontman Martin has a likeable and funny persona that is well suited to vaudeville, though I personally prefer the punkier numbers like ‘24 Hour Drinking’ and ‘You Fat B*stard’. The band offers a surprisingly competent backing to the silliness. Guitarist ‘Captain’ Kirk and bassist ‘Baby’ David are looking like they’re having a whole lot of fun. Drummer ‘Mass Murder’ McGhee thunders around the kit and ‘Blonde’ Wanton’s fingers dance up and down the keyboard. Their pastiche numbers work particularly well. ‘Nine Stone Rent Boy’ (‘Rhinestone Cowboy’) is filthy and tasteless but genuinely hilarious. ‘We’re Old’ in the style of The Who stands out too. The crowd here clearly loves The Fish Brothers, and there are plenty of hands waving in the air through the closing number ‘A Brief History Of The World’. I’m impressed by how many of the audience return the Fish salute (fingers above the head, like a dorsal fin) at the set’s triumphant conclusion.

More info on the HERE.

It’s a warm summer evening and I suspect quite a few people have been sitting outside. As the main band are about to start the hall is suddenly packed. It’s a seriously impressive turnout for a Sunday night. The Piranhas’ ‘Tom Hark’ over the PA is getting everyone in the mood. 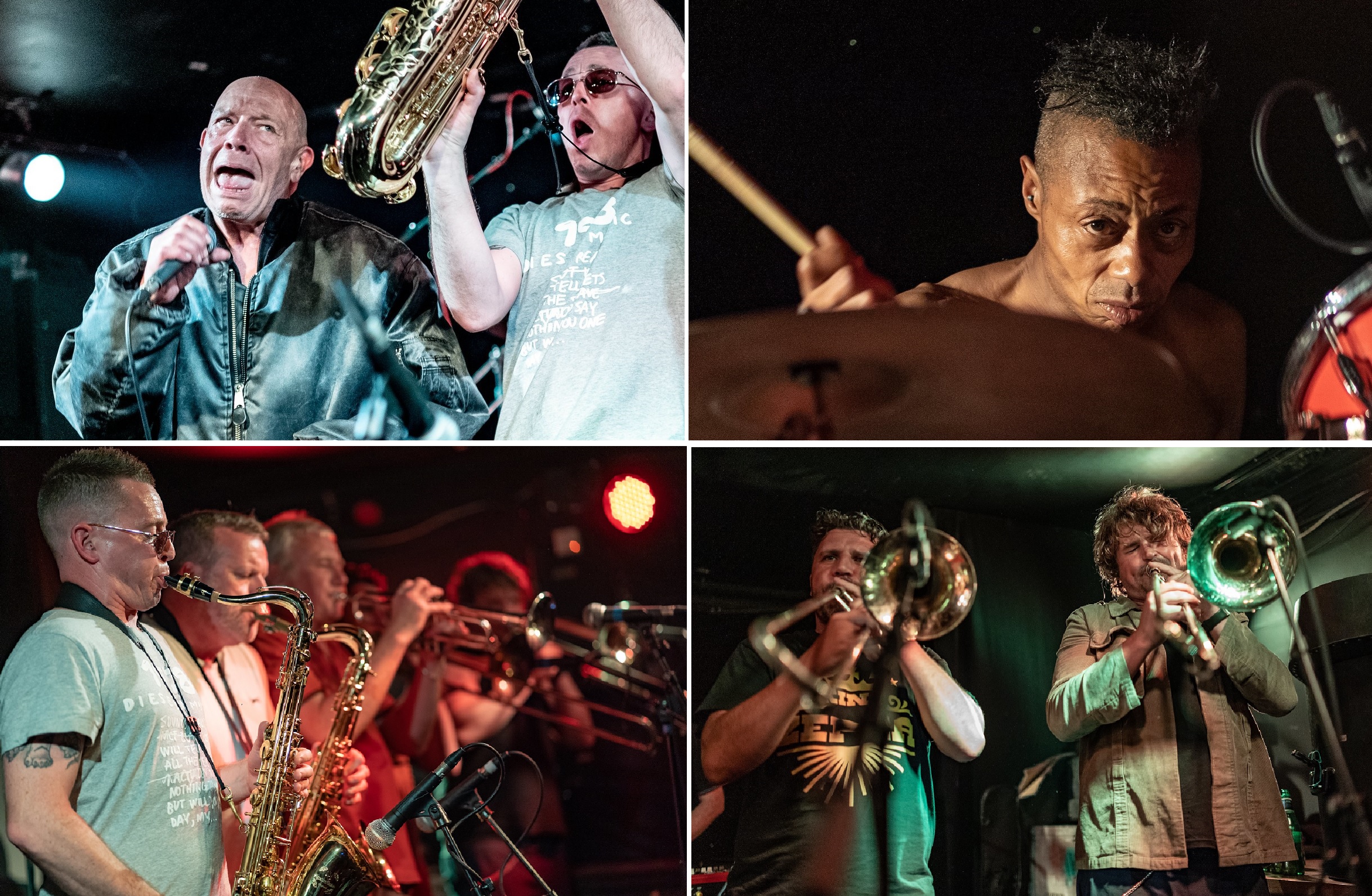 The band members of Bad Manners take the stage for the opening instrumental ‘Echo 4-2’. It’s not easy to keep track of the personnel as they change frequently, but from what I can glean, tonight we have a horn section with Sam and Chris on saxes, plus Sky and Stuart on trumpet and trombone. Long time bass player Lee Thompson grooves alongside a young guitarist called Tom, and both grin broadly throughout the set. Drummer Mark sets a brisk tempo, sending fills scurrying around the kit. Dave on the keyboards is hard to see behind the other players, but the swirling organ combined with the horns makes for a massive sound.

Buster Bloodvessel bounds on stage to a huge cheer and launches into ‘This Is Ska’. If you haven’t come across him in recent years, one thing that is immediately apparent that he’s lost a considerable amount of weight, though he’s still a larger than life character with a mesmeric stage presence. An early romp through a couple of hits, ‘My Girl Lollipop’ and ‘Lorraine’ has the whole room joyfully bouncing along, and this continues with increasing altitude gained for ‘Feel Like Jumping’.

It’s all about fun and dancing as we move on through a selection of album tracks and covers. I’m not usually a fan of mashing different songs together, but Bad Manners have turned ska instrumental medleys into a speciality. ‘Red River Ska’ is particularly good fun, departing into short bursts of nostalgic 1970’s TV themes. I spot ‘Call My Bluff’ and ‘Animal Magic’. Likewise, a cover of The Skatalites’ ‘El Pussycat’ segues seamlessly into the same band’s ‘Guns Of Navarone’. There’s a slightly bizarre ska reworking of Andy Williams’ ‘Can’t Take My Eyes Off You’, which gets a fantastic response, with wildly enthusiastic dancing.

The audience are a good mix of ages and genders, and seem well up for a drink and a dance on a warm Sunday evening. It’s getting increasingly hot and sweaty in the room, but there’s no let up to the pace. A blistering cover of ‘Wooly Bully’ has some of the mature audience members recalling their youth with some inadvisably vigorous dancing. The number has barely finished before the opening figure of ‘Special Brew’ sets it all going again. The song’s double time section inspires utter mayhem.

There’s no time for the usual business of calling for an encore. The eleven o’clock curfew is looming, so it’s straight into the evening’s climax of ‘Lip Up Fatty’ and ‘Can Can’ which have absolutely everyone dancing, including me. I’m pleased to see that Buster can still manage a few high kicks. It’s been a good natured and joyful evening, with the focus on dancing and fun. A lot of people have had a very good time tonight.