The triumphant return of the Eels 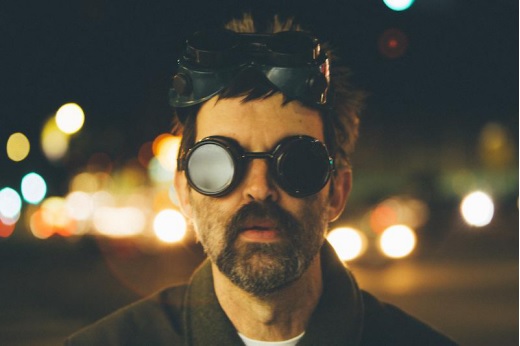 Tonight sees the triumphant return of Eels. At least, that’s what the slogan on their tour T-shirts says. Before we can judge whether that statement is correct or not, we have a support act in the shape of Robert Ellis to entertain us.

Robert is dressed in a white suit with a large white cowboy hat. If he passed you in the street you certainly wouldn’t miss him. Still, he does come from Texas so it probably isn’t unreasonable for him to dress in such a manner even if he is in west London rather than the Wild West. Having said that, Hammersmith can be pretty wild at times.

Robert Ellis is a witty singer-songwriter whose inter-song banter verges on stand-up comedy. His acoustic guitar playing is extraordinarily good, and to prove he really does have a serious side he sings a song called ‘Father’ which is one of the saddest compositions that I’ve heard by anyone. ‘Nobody Smokes Anymore’ is another lament, this time about the lack of people consuming nicotine and tobacco, but it has nowhere near the level of tragedy of ‘Father’. 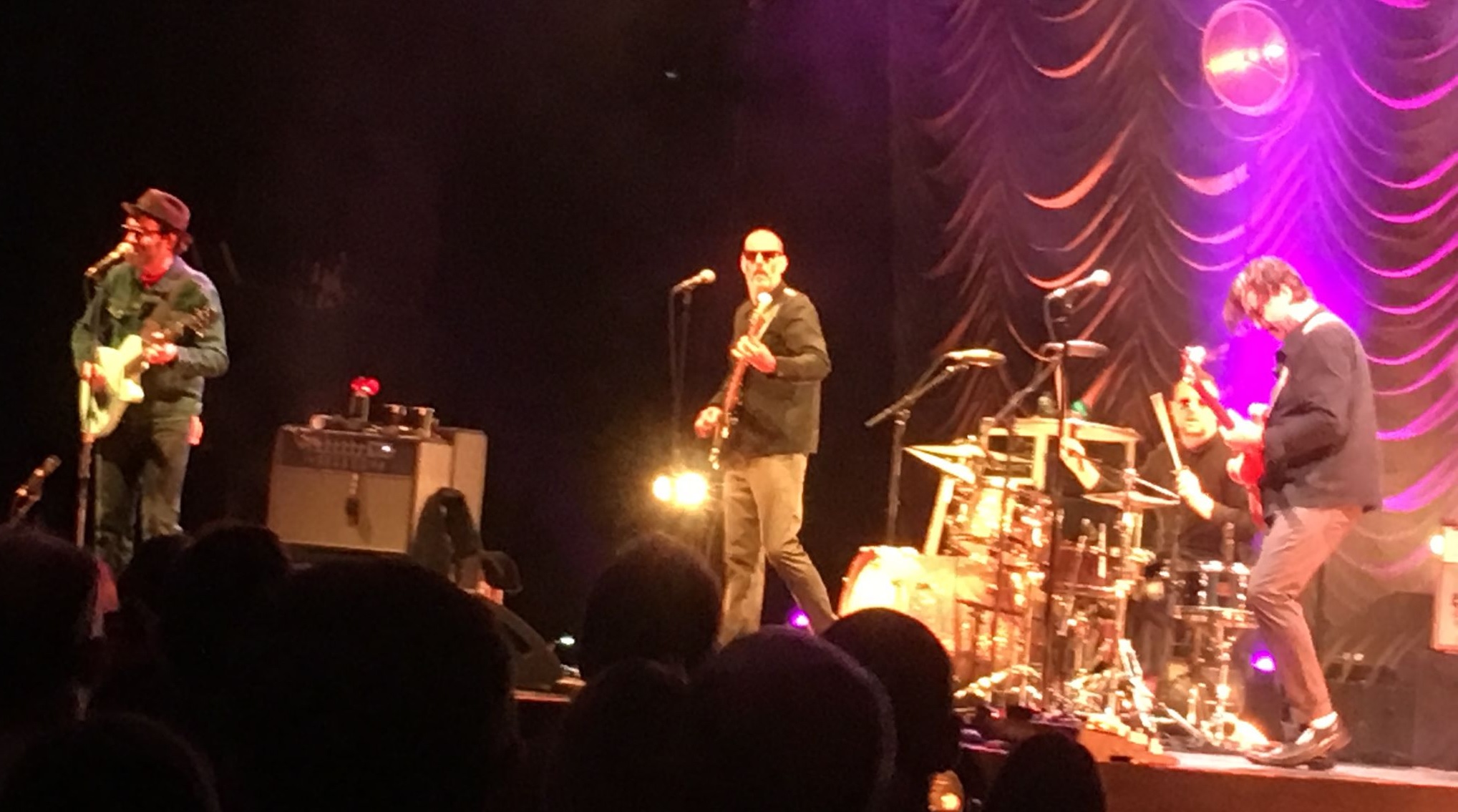 Still – on to the main event! The only predictable thing about Eels is that you really have no idea what they are going to do when they play live. Tonight, for reasons best known to themselves, they open their set with three blistering covers: ‘Out In The Streets’ by The Who, ‘Mississippi Delta’ by Bobbie Gentry and ‘Raspberry Beret’ by Prince. Great versions too, but when they have such a superb back catalogue commencing their set in such a manner seems slightly perverse.

However, that back catalogue does get a substantial airing as the evening progresses. Surprisingly, and refreshingly, material from their current album doesn’t get played to death. We’re only treated to three selections from ‘The Deconstruction’, one of which, ‘Bone Dry’ is the first Eels original that we hear tonight. Otherwise the majority of Eels’ albums are well represented, with 2009’s ‘Hombre Lobo’ seemingly being the band’s current favourite, with four selections.

Eels’ stage band is absolutely mega. Guitarist P-Boo and bassist Big Al have been with them for a few years. Drummer Little Joe is a relatively new addition. They may have silly names (indeed it seems to be nigh on impossible to discover their real identities) but these guys can really play with a capital ‘P’.

As with all musicians who play with ‘E’, a sense of humour is clearly a pre-requisite. During band introductions we’re told that P-Boo was on the catwalk at a fashion show when he was seventeen, and he duly performs a ‘catwalk’ walk down to the front of the stage. Bassist Big Al is invited onto the ‘Lead Singer’s Rostrum’ where he towers over E. E explains that he is 6’4”, but you would never know it seeing him stand next to Big Al. I suspect that E is closer to 5’ 7”…… He claims to have recruited “a band of giants!!!” Drummer Little Joe is introduced by means of a special song fittingly titled ‘Little Joe’. You don’t get this kind of thing with The Rolling Stones, and their tickets are way more expensive…….

Talking of the Strolling Bones, we had another cover halfway through the set – a fantabulous version of the Stones’ ‘She Said Yeah’. However, as well as other artists’ greatest hits, we also got some from Eels too. ‘Novocaine For The Soul’ signifies that we’re heading towards the end of the set. It’s barely recognisable from the original version on ‘Beautiful Freak’ though, being driven along by a very Zeppelinesque riff. A great example of how songs should evolve live. ‘Souljacker pt.1’ is pleasingly epic, with E feeding back while each band member walks to the front of the stage in turn for applause. The main set finishes with ‘PS You Rock My World’ from 1998’s ‘Electro-Shock Blues’, which is probably the nearest any artist has come to matching Lou Reed’s ‘Berlin’ album for sheer tragedy.

The band soon return for ‘Fresh Feeling’ before once again leaving the stage. They return for a lengthy second encore, culminating in a medley of Brian Wilson’s ‘Love And Mercy’, then ‘Blinking Lights’ and ‘Wonderful, Glorious’. E leaves the stage whilst the band play an instrumental culminating in a superb version of The Beatles’ ‘The End’. To call this an epic encore simply doesn’t do it justice!!!

I’ve seen Eels a few times, but I don’t believe I’ve ever seen them do covers before. However, these combined with an inspired mystery tour through their back catalogue have made for a superb show. A triumphant return???? You bet!!!!

Eels setlist reads:
‘Out In The Street’ (The Who cover)
‘Mississippi Delta’ (Bobbie Gentry cover)
‘Raspberry Beret’ (Prince cover)
‘Bone Dry’
‘Flyswatter’
‘Dog Faced Boy’
‘I Need Some Sleep’
‘Dirty Girl’
‘That Look You Give That Guy’
‘Prizefighter’
‘She Said Yeah’ (The Rolling Stones cover)
‘Tremendous Dynamite’
‘Open My Present’
‘You Are The Shining Light’
‘My Beloved Monster’
‘In The Yard, Behind The Church’
‘I Like The Way This Is Going’
‘Little Joe!’
‘Today Is The Day’
‘Novocaine For The Soul’
‘Souljacker, Part I’
‘I Like Birds’
‘P.S. You Rock My World’
(encore 1)
‘Fresh Feeling’
(encore 2)
‘Mr. E’s Beautiful Blues’
‘Fresh Blood’
‘Love And Mercy’ / ‘Blinking Lights (For Me)’ / ‘Wonderful, Glorious’ (Love and Mercy)
‘The End’ (The Beatles cover) (Without E)
(Outro tape) ‘Blinking Lights (For Me)’ (Outro, Choir) 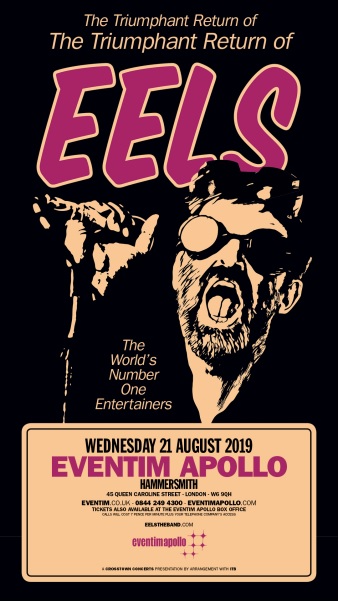