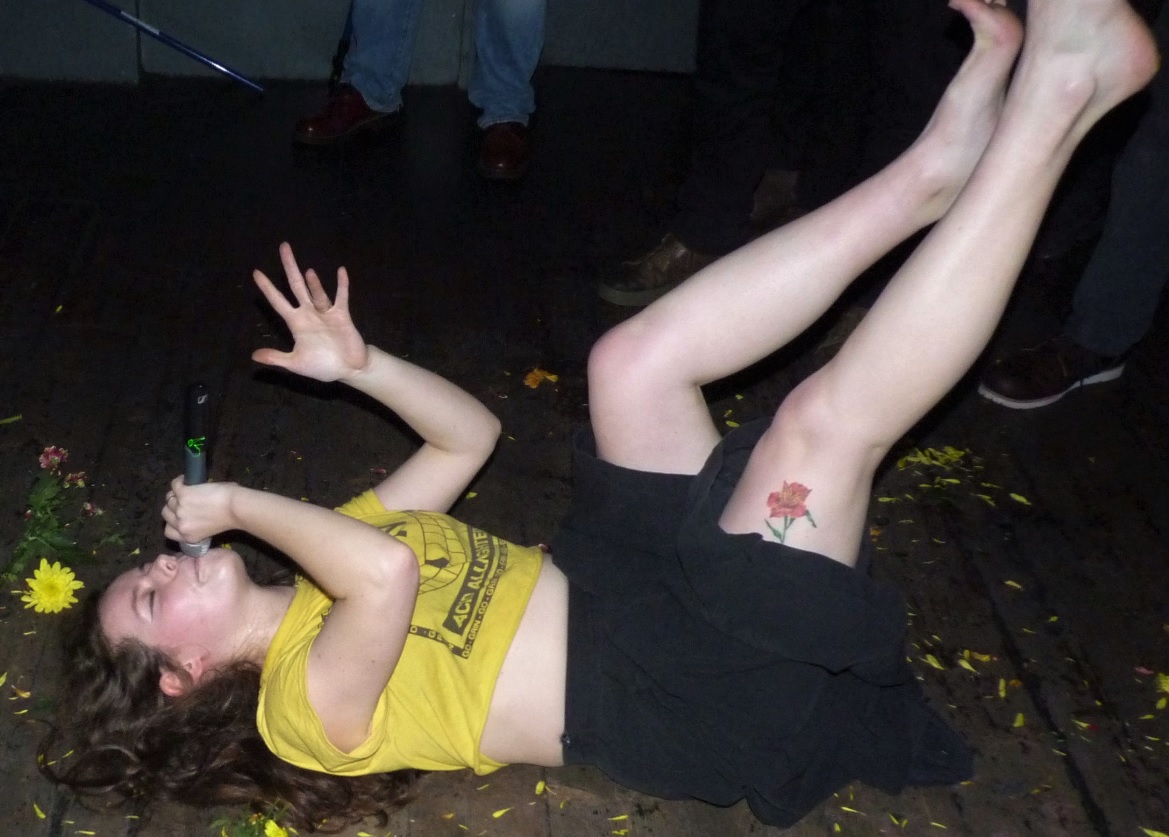 My colleague and I had been waiting for this evenings gig with much anticipation as we had witnessed headliners Free Love perform live in Brighton as part of The Great Escape in 2018. They were the best act that we witnessed at that years new music festival and anticipation for this evening’s performance was arguably going through the roof……we weren’t disappointed!

In fact we were so enamoured with their performance at One Church in Gloucester Place, Brighton, that we also saw their other Great Escape set at the Studio Bar at the Komedia. The One Church set was the best of all 41 sets that we had witnessed at TGE in 2018. That was also a memorable performance for Free Love, as that very morning they had decided to change their band’s name from Happy Meals. A very wise decision methinks! 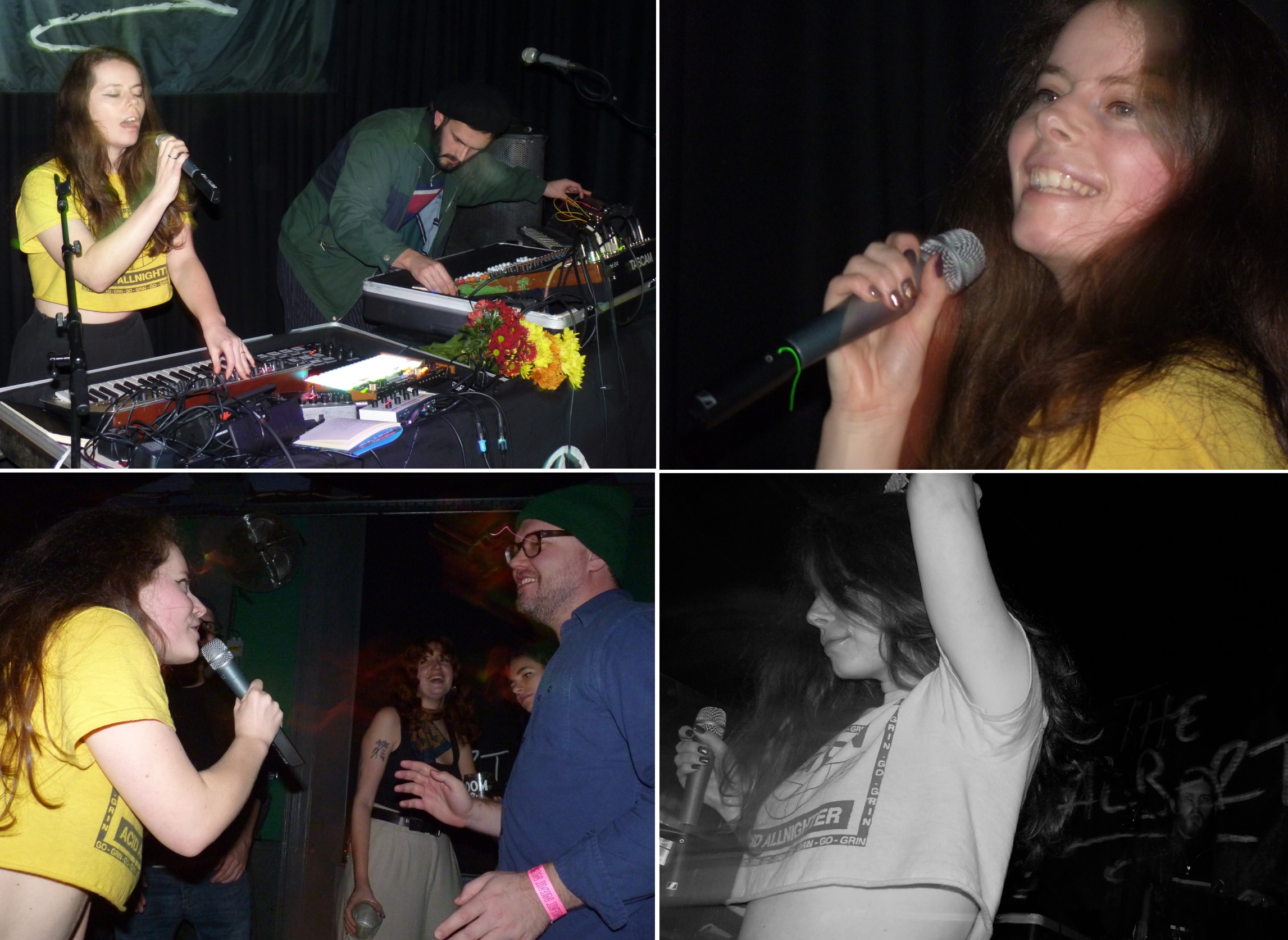 Free Love are the Glasgow-based duo of Suzanne Rodden and Lewis Cook and they specialise in minimalist Italo/Euro disco. Not only that, but they’ve hit on the terrific notion of Suzanne regularly singing in French and voilá their electronic beats and smooth uplifting synth grooves take on a new sexy fantasy for the listeners – miles more interesting than actually just teaching French as ‘Suzi’ used to do.

The video that initially got me hooked on this exciting duo prior to their TGE performance was an epic 32 minute live studio session that swept away! Watch that video HERE.

After my Free Love conversion, they unleashed the rather wonderful ‘Playing As Punks’ from the terrific ‘Luxury Hits’ album, which really has to me the feel of a greatest hits release as it’s so consistent. On the 20th September this year they dropped a brand new mini-album of further fine music titled ‘Extreme Dance Anthems’ and you can watch ‘Bones’ from this release HERE.

The guys are therefore out and about plugging the new release and have very recently returned from a most enjoyable jaunt to Iceland, when they performed to a sold out crowd at the Iceland Airwaves Festival in Reykjavik on 9th November. They returned home to Glasgow much invigorated and bolted down all the way to The Prince Albert in Brighton this evening.

Seems as though we are not the only ones enamoured with Free Love’s shows as MixMagazine have quoted “Surely one of the most magnetic and charismatic performers in the land right now… the pair once seen, never forgotten”. Yes indeed we second that!

Tonight we were served nine tracks, with a third of them possibly still unreleased, with the remainder being culled from their work over the past three years. They opened with ‘Everyone’ from the ‘Extreme Dance Anthems’ mini-album, which musically set the tone of the set. The lighting was deliberately atmospheric and had a video backdrop on the go too. Lewis was on Tascam model 24 keys duty and Suzanne was on knob twiddling duty and vocals. The tracks nearly always flowed seamlessly from one to another, just like a DJ set with Lewis getting more into the groove as the set progressed and ‘Suzi’ became a Scottish woman possessed as a seductive French flower girl who was into her yoga. She really goes take on a different personality during her shows and clearly enjoys doing so, judging by her beaming smile. Vocally she does remind me of the sadly departed Regine Fetet, who was the lead singer of the totally brilliant ‘hard CORPS’, who supported Depeche Mode and The Cure in their time. They also appeared on the very popular ‘The Tube’ TV show – watch their performance HERE. Free Love’s second tune tonight ‘Magpies’ does very much remind me of hard CORPS, with a dash of the Cocteau Twins thrown in for good measure.

Their third number ‘Synchronicity’ seriously has a funky vibe going down that will rival any Herbie Hancock tune. We danced and danced harder the longer the set went on. Tonight was indeed another classic night. I was discussing with a fellow fan called Matt after the set and he referred Free Love as “an Acid House version of Yazoo”, which is a sound analogy.

Brighton was a perfect choice for an opening night of the UK tour for the duo and they can go on conquering the rest of the land as they head on up back towards home.

Support this evening came from Fruity Water hand Via Tirana. 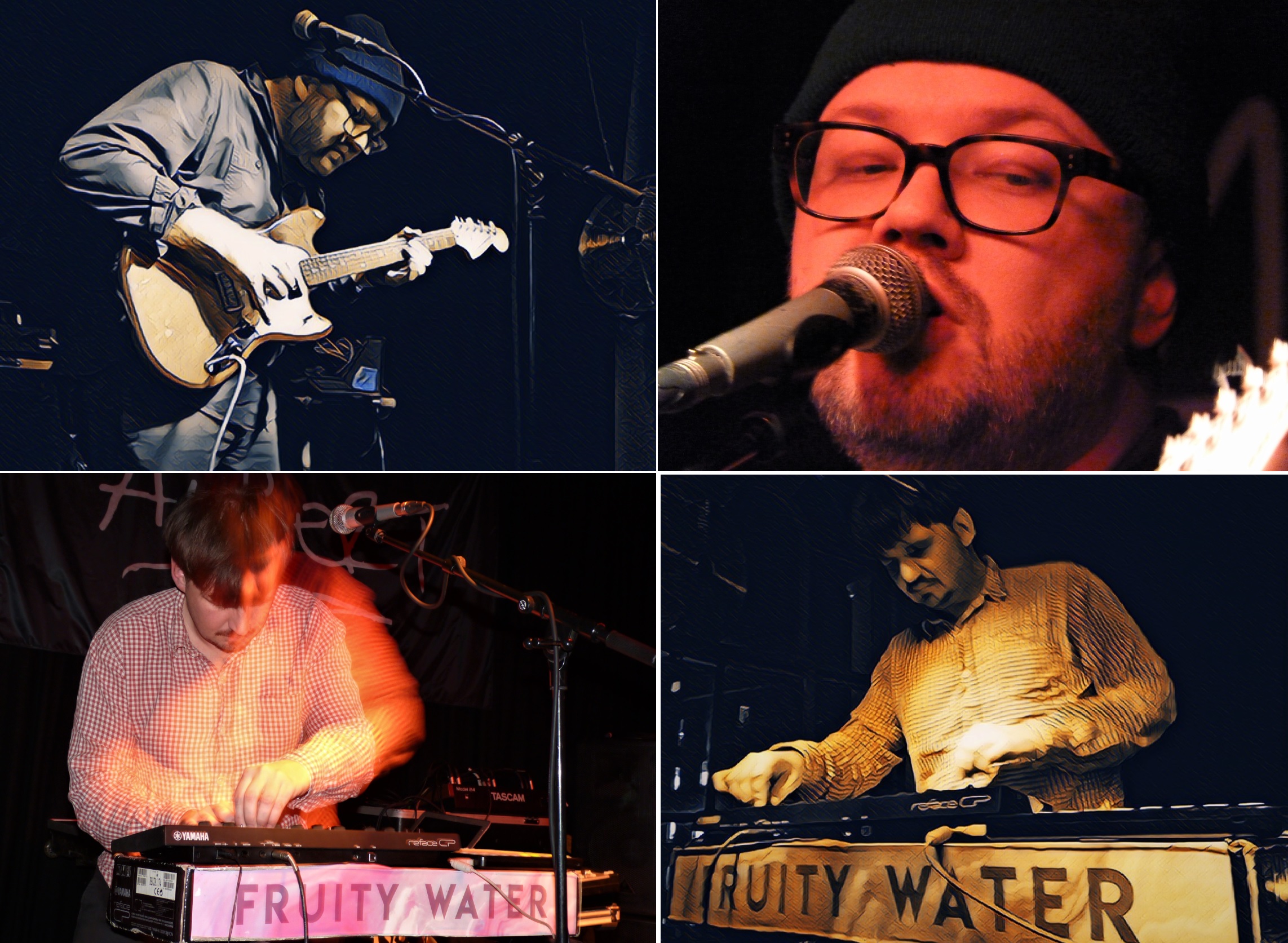 Kicking things off were Brighton based Fruity Water, who are Adam on guitar and Smalanin on keyboards and in their own words they refer to themselves as “just a couple of lads making some dreamy electro-pop”. It really doesn’t get any more complicated than that. We have had the fortune to have caught these lads playing live around Brighton over the past couple of years and they have never failed to deliver in their own unassuming way.

This evening their sadly all-to-brief 5 song set was in parts akin to uptempo rave and in others sounding downtempo rather like Laish. There was ample use of the two Yamaha keyboards and Novation by Smalanin, whereas Adam was hunched over his guitar, whilst sporting his trademark beanie hat. Vocals were shared and the overall sound quality was rather crisp, clearly the soundman gets a brownie point here.

The first few tunes were from their debut album, whereas track four, ‘Hassle’ will be appearing on their second album and their final number ‘Friends’ was getting its live debut this evening. It has a really meaty bass line synth sound and the guitar work was in the style of New Order and the vocals could even have been Barney Sumner’s, clearly they are moving in the right direction.

Find out more about Fruity Water HERE and HERE. 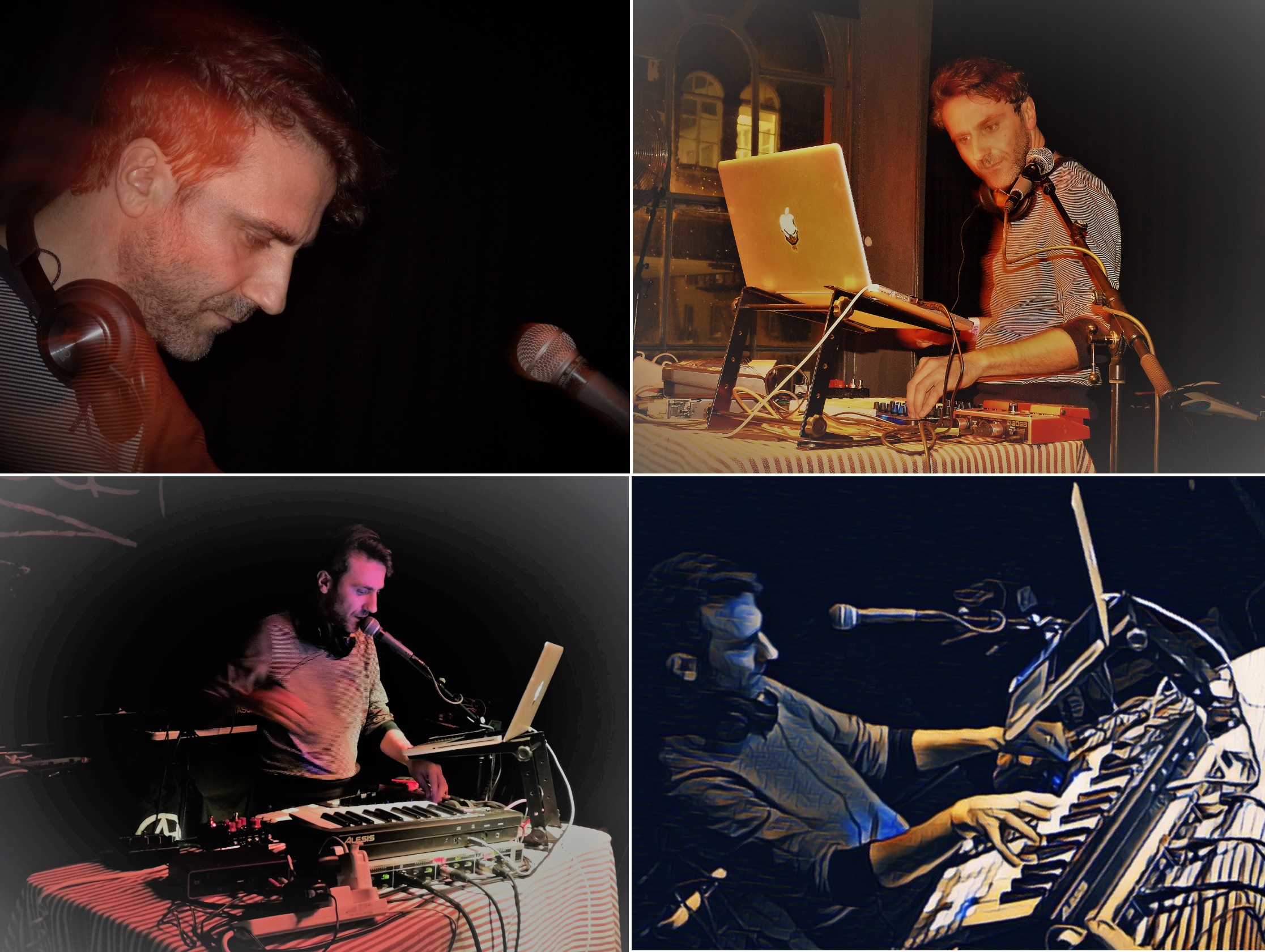 Via Tirana live at The Prince Albert, Brighton 13.11.19 (pics Nick Linazasoro) (click on pics to enlarge!)

The second act on the bill was new to us and that was the unusually named Via Tirana, which is the brainchild of Albanian born Genti, who is a very nice chap indeed. Before I forget, he is also performing in Brighton up at The Hope & Ruin on 12th December. The event will be held downstairs and it is a free concert with Pick A Piper, but you need to secure your free tickets HERE.

Via Tirana is a Brighton-based off the wall indie-electronic dance project. The sound is a full synergy of electronic beats, synths with live instrumentation and vocals. This evening it’s just Genti, but he is usually joined by a pal on guitar, but I would have been none the wiser if he hadn’t told us. He was plugging away on his Alesis keys, knobs and laptop and it initially sounded very Kraftwerk on opener ‘Wa Wa Waves’, which is a sure fire winner with yours truly. We then went for the heavenly 1981 synthpop sound on the follow up tune ‘Feel’, before morphing into the Daft Punk and Fujiya & Miyagi sound for track three ‘Dave The Machine’. The final number was an extended version of what it normally should be, but as it was on himself on stage, he could do exactly what he wanted. That track being ‘Tekila’ as in tequila the drink. A really uplifting set and we have already grabbed our free tickets for his 12th December concert! Got yours?

Brighton is always buzzing and tonight it was no different. Although there are not enough electronic music gigs to my liking. Typically we had to choose between this concert and Boy Harsher performing live at CHALK. We chose Free Love, although we have yet to see Boy Harsher live. Amazingly as Free Love’s set finished the DJ played ‘Country Girl’ by Boy Harsher and so I got my fix. Then he followed it up with ‘Psychic Data’ from TVAM, who we will be seeing live on 18th January 2020 at the All Saint Centre in Lewes as part of the ‘Lewes Psychedelic Festival’ – details HERE. 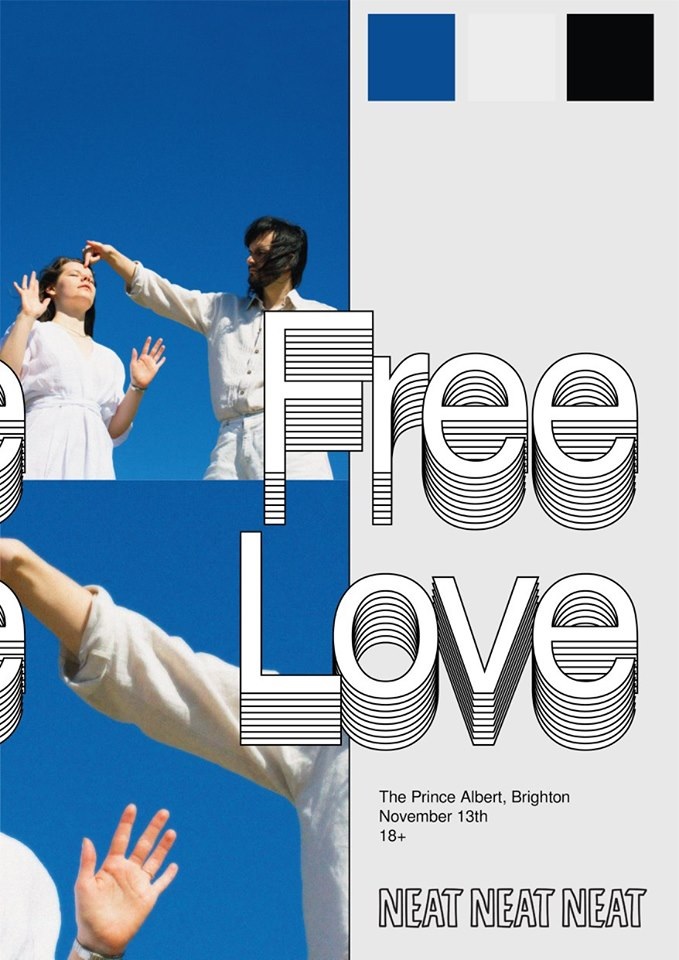 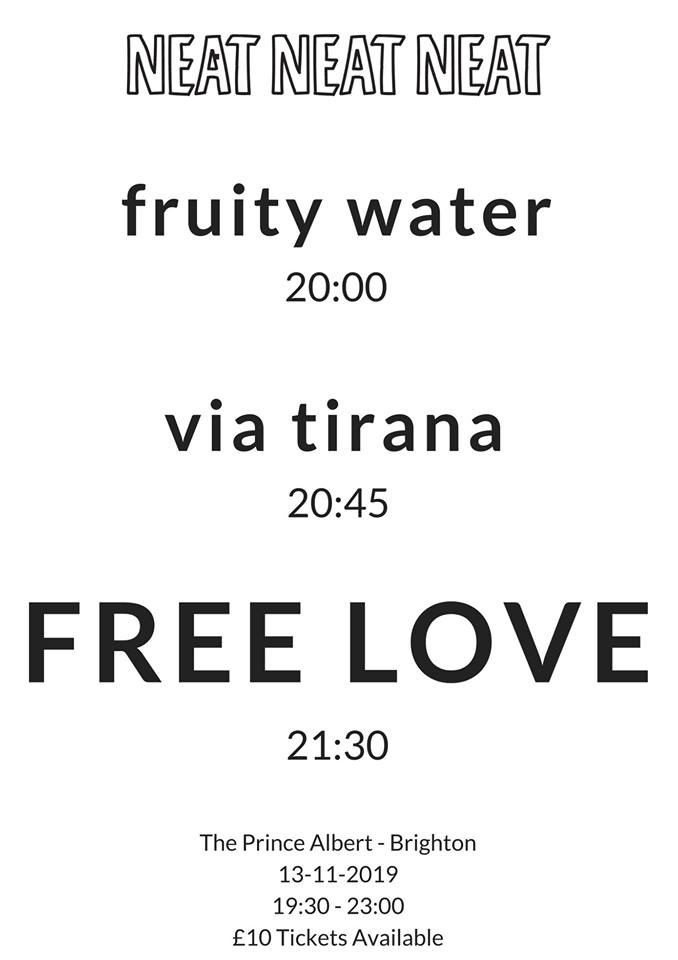