‘Ants Invasion’ in Brighton and Bexhill 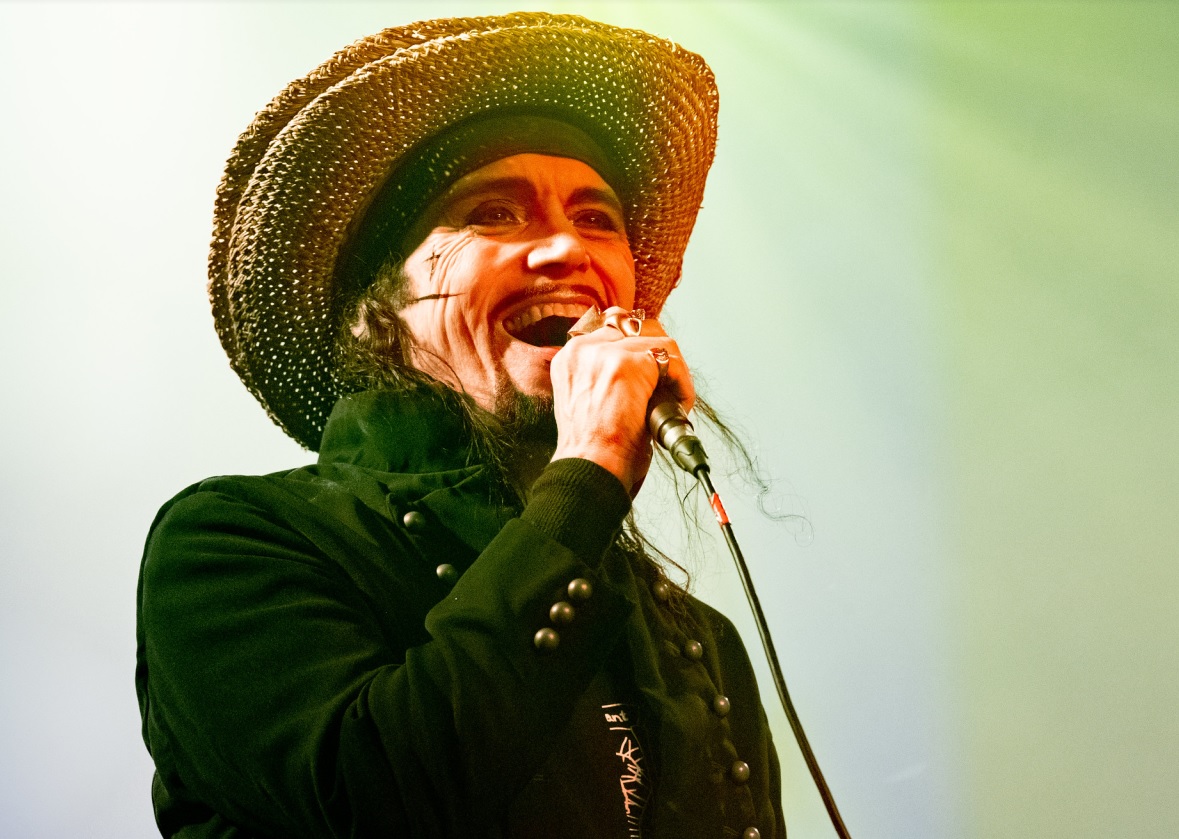 Antmania spread across East Sussex last week, as the 1980’s “Dandy Highwayman” Adam Ant came to no less than two Sussex venues in order to perform his timeless “Antmusic” for ‘Antpeople’.

Adam and his five fellow “Press Darlings” rocked on up at the iconic De La Warr Pavilion in Bexhill-on-Sea on Tuesday 3rd December and then returned to the county on Friday 6th December, with an appearance at the cavernous Brighton Centre. The Brighton & Hove News Music Team were present at both events and we can excitingly reveal that our wonderful selection of photographs of Adam, (taken by Sara-Louise Bowrey and Cris Watkins) have been specially selected from those approved by the great man himself! 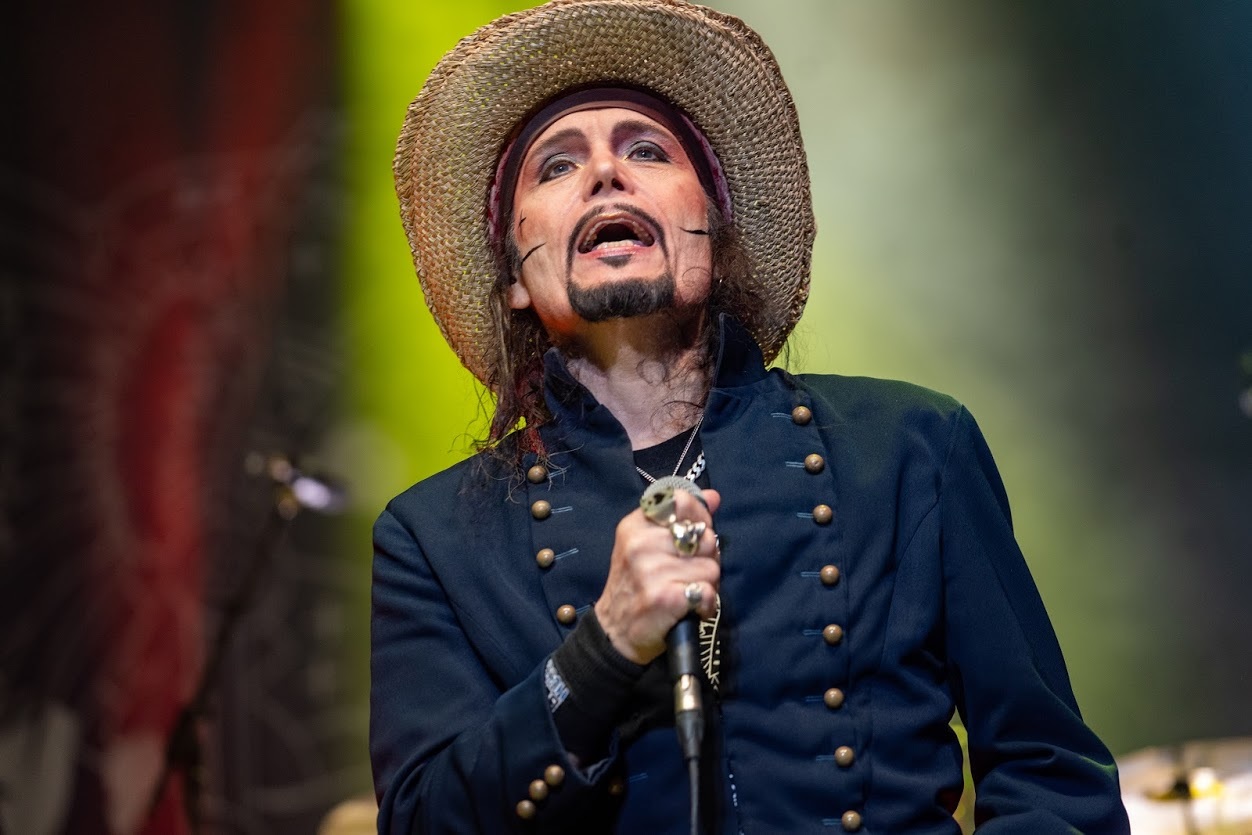 Adam was born Stuart Leslie Goddard in 1954 – yes honestly he is 65, but you would never guess it by the way he was whizzing around the two stages – and was on his 26-date of the UK in celebration of his landmark first solo album ‘Friend Or Foe’ from 1982, which included his 3 hit singles, ‘Goody Two Shoes’ (which reached No.1 in the UK, was also No.1 in Australia and hit No.6 in the USA Billboard Chart), ‘Friend or Foe’, (which was another top ten hit in the UK) and ‘Desperate But Not Serious’ (which was the album’s third UK smash).

‘Friend or Foe’ was his most successful solo album to date, having made No.5 in the UK and was certified gold album status on both sides of the Atlantic after selling over 100,000 copies. In the USA, the album reached No.16 on the Billboard album chart and turned Adam Ant into a household name, resulting in a Grammy nomination for Best New Artist and an MTV Award for ‘Sexiest Man Alive’!

Adam, who has two Ivor Novello Awards and was the Winner of 1st Brit Award, played his landmark 12 track ‘Friend or Foe’ album in its entirety in the correct running order at both Bexhill and Brighton concerts, as well as performing several of his classic solo and Adam And The Ants chart-topping singles, along with a host of his personal favourites. Each night we were served no less than 29 tunes by our reckoning!

Both of the concert performances were essentially the same, with the opening intro tape of ‘Main Theme from “The Saint”’ kicking things off and all twelve songs from ‘Friend Or Foe’ being performed in their correct running order. Adam’s band for the tour consisted of guitarists Will Crewdson and Adam Paul (A. P.) Leach, bassist Joe Holweger, and drummers Jola and Andy Woodard. 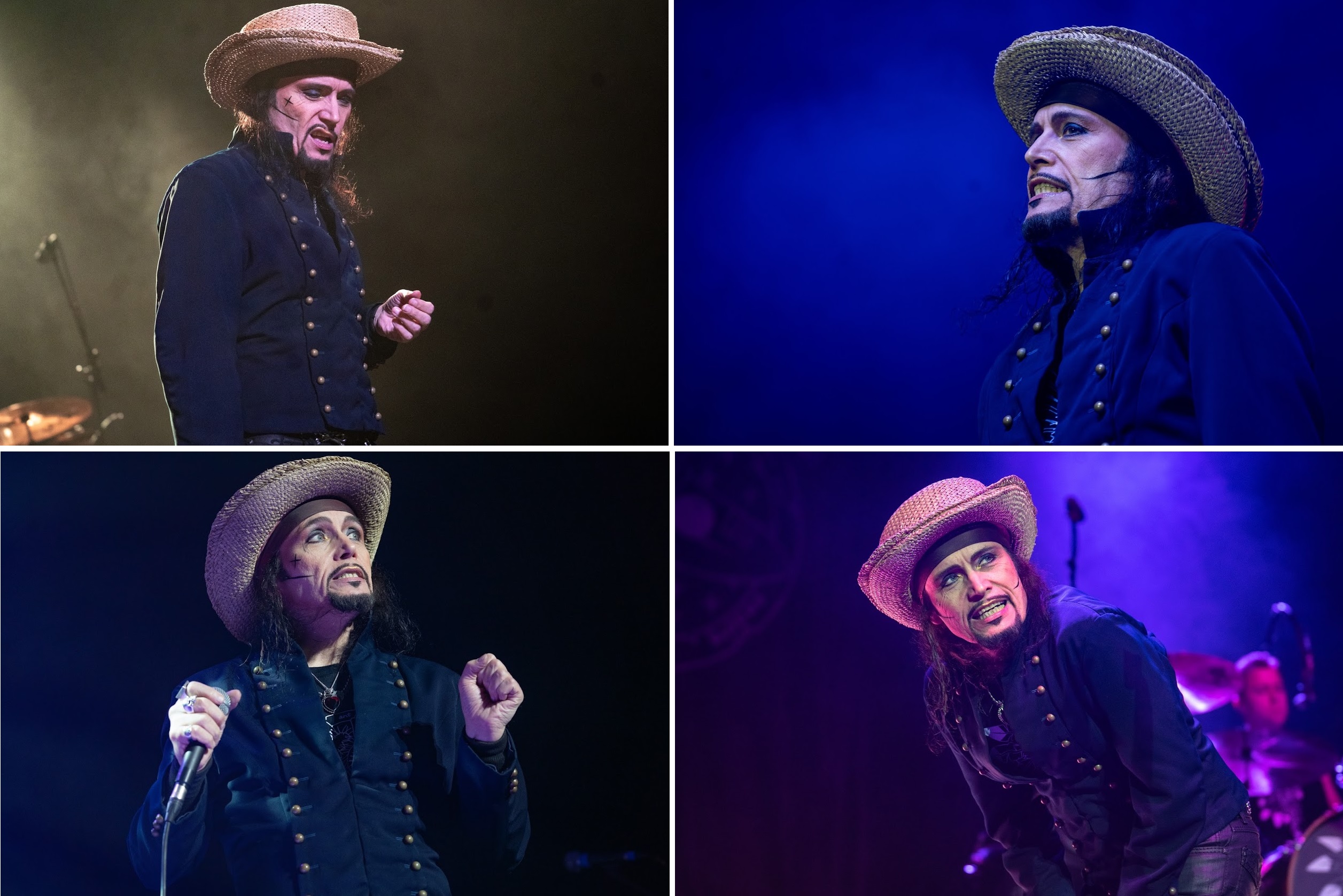 Neither of the shows were filled to capacity, which was a surprise to me, as last time I witnessed him play live in Brighton (on 28th May 2016 for the celebration of ‘Kings Of The Wild Frontier’ album), it was a sell out. But having said that, I seem to recall that was the only Sussex date on the smaller 14 date tour, so overall it is very likely that more multi-generation ‘Antpeople’ attended this tour than the last.

The acoustics for both concerts were rather good and the lighting was alright as well. For Bexhill we were standing right near the front of the stage and for Brighton we were up in the front row of the South balcony. So that we were able to get two different perspectives of the performances. Both times Adam busied himself around the stage and the seated audience at the Brighton Centre were up out of their seats from the off, whereas Bexhill was a majority standing in the first place. The atmosphere on the two occasions was jovial, with Brighton shading it as slightly more up for it!

It felt that at Bexhill and Brighton that once the dozen ‘Friend Or Foe’ tracks were out of the way, and the opening bars of the tribal drumming stix of ‘Dog Eat Dog’ were sounding out, that the concerts went up a notch! Indeed the following track ‘Kick!’ (the b-side of the 1980 Adam And The Ants ‘Cartrouble’ single) was for me personally the surprise hit of both sets, especially at Bexhill. I was assuming that ‘Kings Of The Wild Frontier’ would be my fave,but that was a second choice.

I rather enjoyed the parts where there were four lots of drumming on the go, which was very Burundi indeed. Adam liked to pose around the stages and picked up his Gibson guitar for a few songs, commencing with the oldies ‘Zerox’ and ‘Cartrouble’, as well as ‘Ants Invasion’ and ‘Prince Charming’. At both shows Adam dedicated a tune to punk legend Jordan Mooney, who was in attendance both times. She goes back a long way with Adam and his Ants, in having been their manager for a while, as well as actually for a while marrying a former Antman herself. In fact she posted on social media: “Yet again Adam Ant and his terrific powerhouse of a band performed like the legends that they are. Pitch perfect and working as a great team. Backing vocals are brilliant too. Thanks Ads for dedicating Zerox to me and the after show party was splendid”.

Talking of punk, Adam’s encore tracks were prime examples of this and were a heavy outro on both occasions, with ‘Press Darlings’ (1980), ‘Red Scab’ (1982) and
‘Physical (You’re So)’ (1980). Clearly, Adam looks rather well for someone his age and was agile throughout both sets – long may that continue! 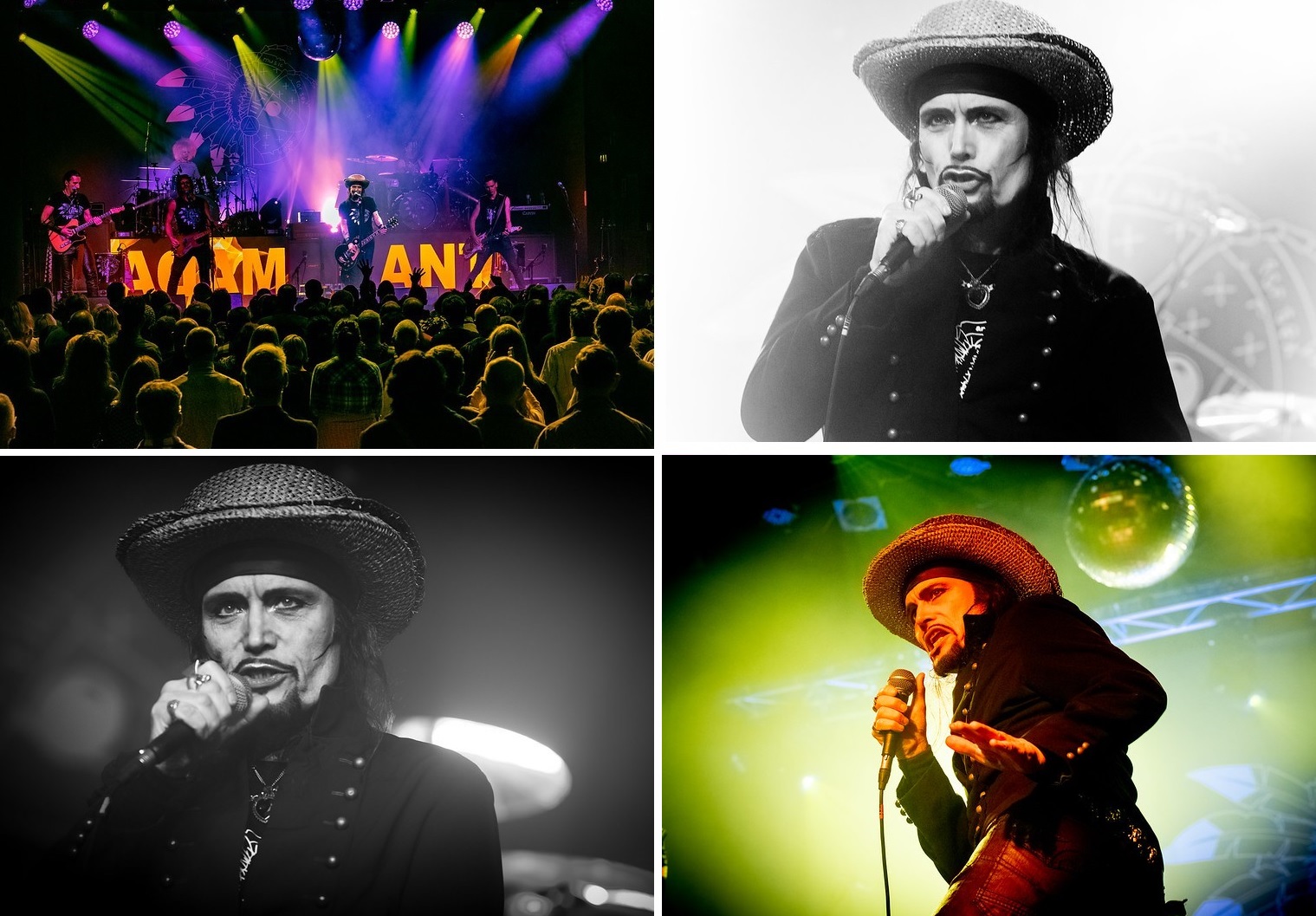 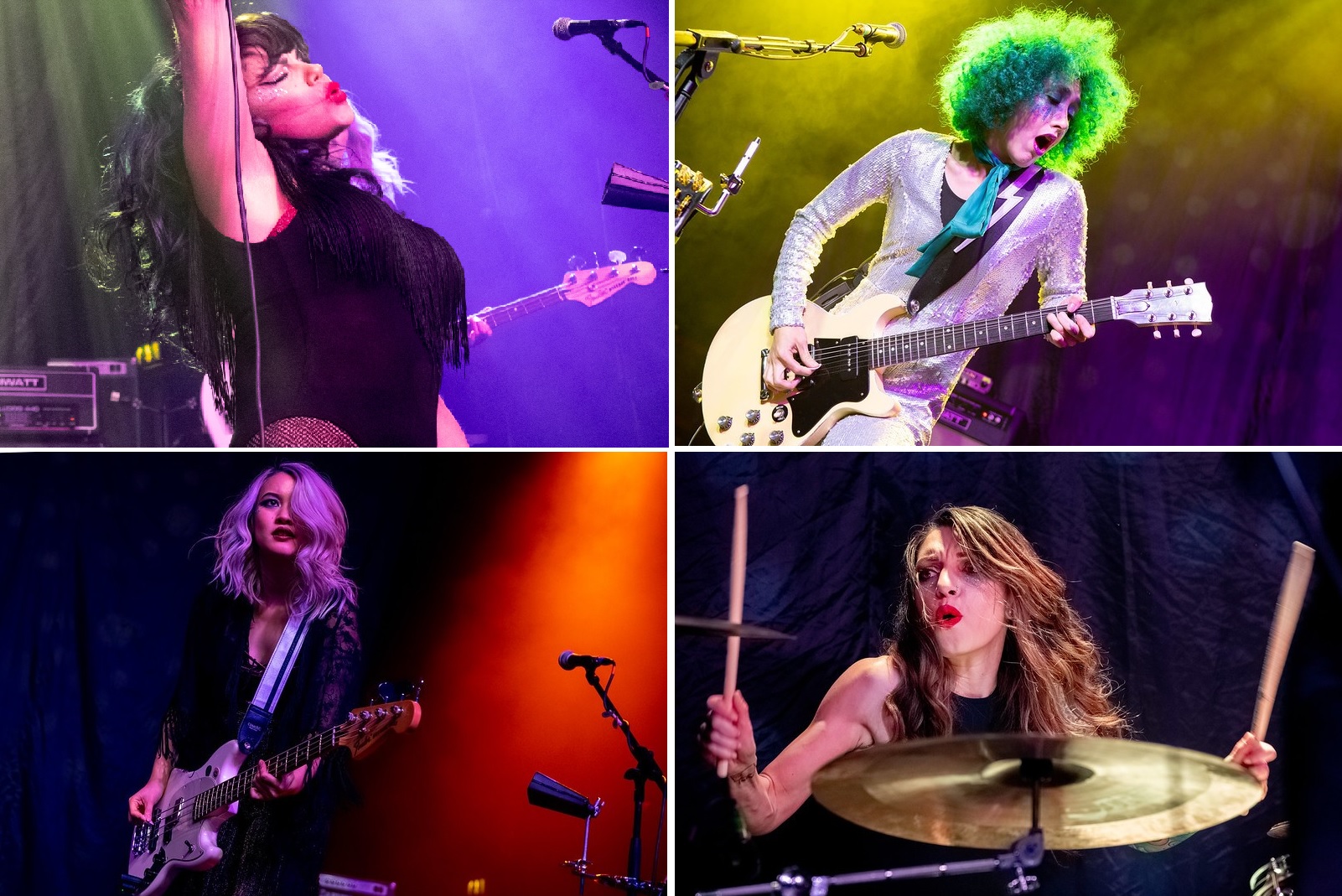 These ladies are great at what they do and in my notes of my first encounter in Bexhill I put that they would be the ideal support for Alice Cooper. I have since learnt that they have already achieved that. I also noted that singer Vanessa (who certainly has a powerful voice) has most certainly got a Joan Jett (of the Runaways) thing going on and have since learnt that Glam Skanks have performed as formed Runaways vocalist Cherie Currie’s backup band. 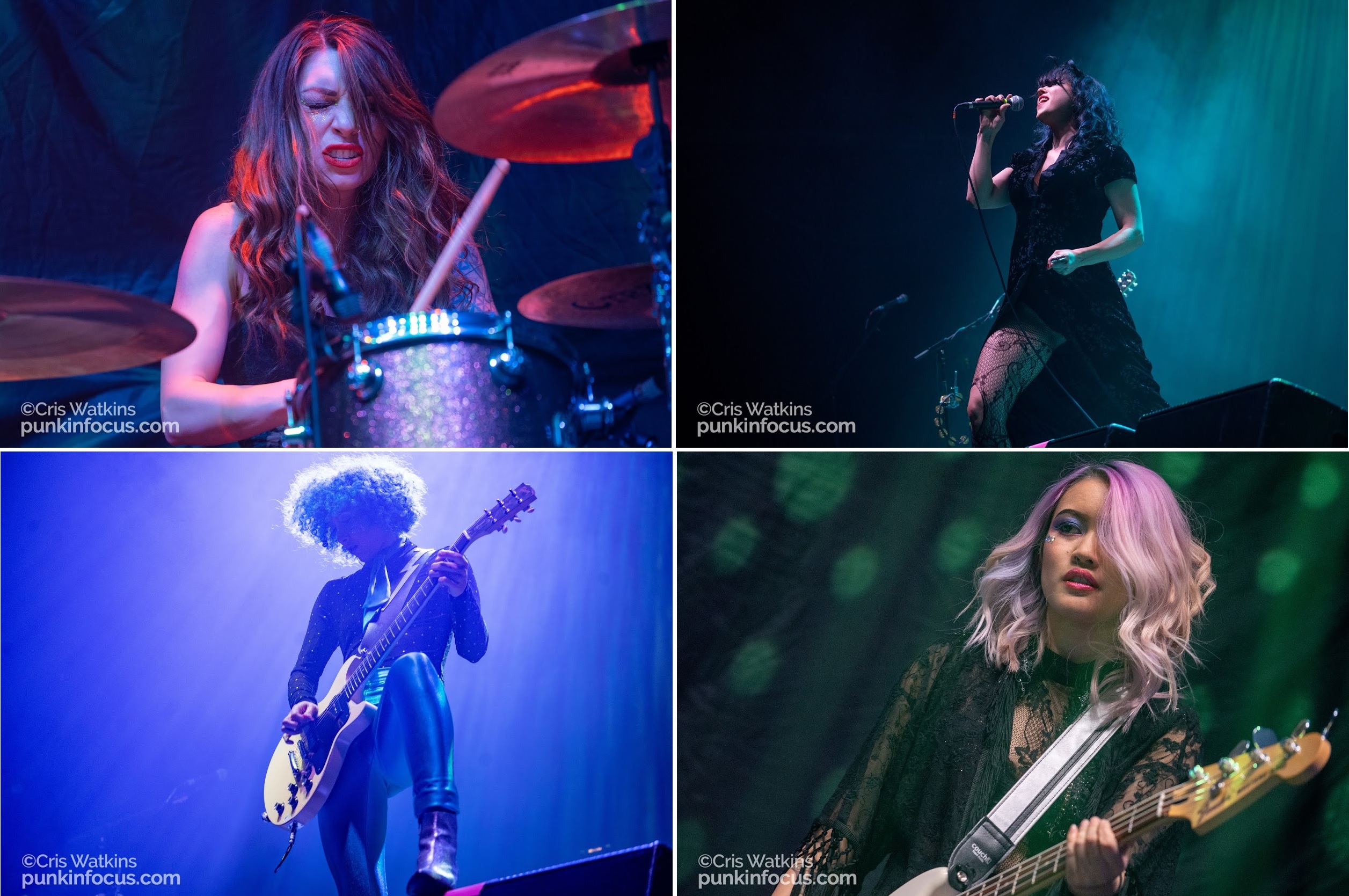 One might assume that their sound could be a hybrid of Glam Rock and Skanking Ska, but sadly not. Think more along the lines of 1992 ‘Wayne’s World’ film soundtrack’s nod to mid-80’s frizzy hair metal/rock, infused with Shania Twain, then you are in the right ballpark. They can seriously play, but weren’t really my cup of tea. But as former Radio 1 DJ Zane Lowe used to say “You’ve gotta respect what they are doing!”. 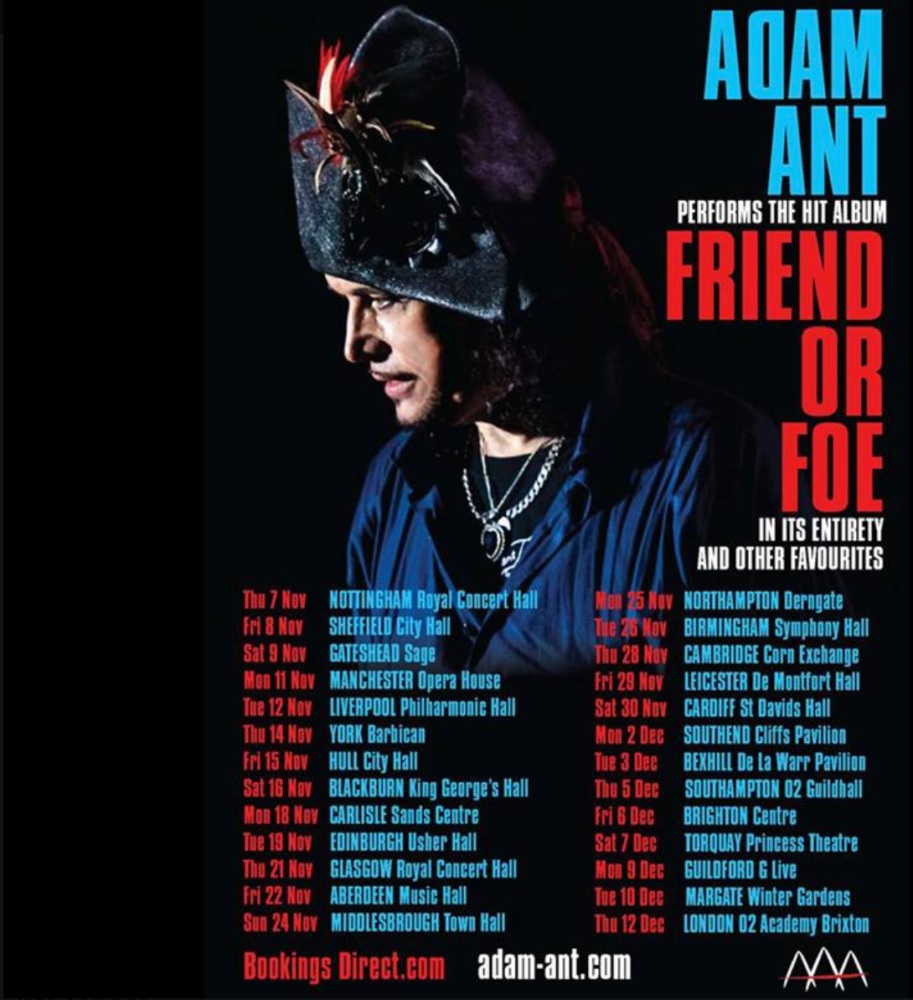