Christmas Apocalypse at the Pipeline! 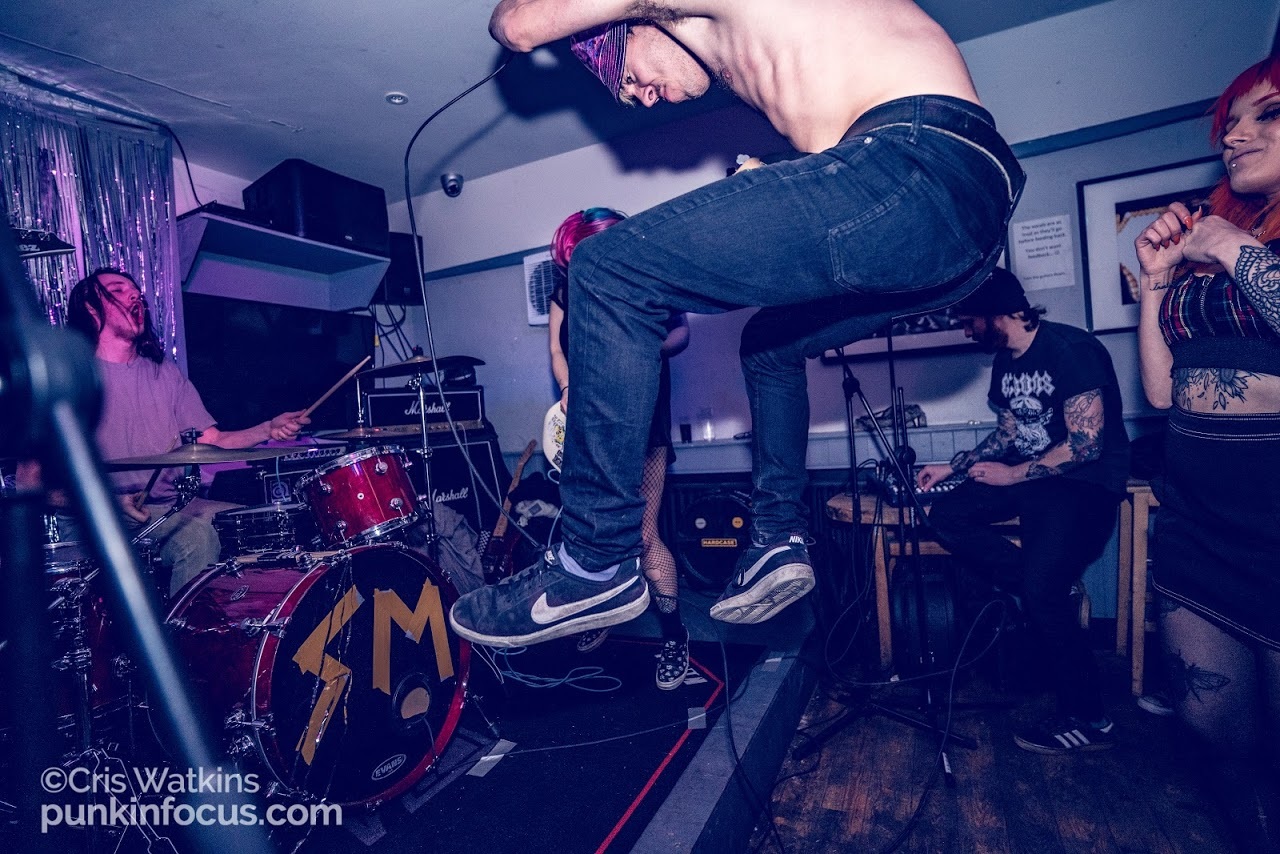 There’s not much of a White Christmas on the horizon. More like a wet and windy grey one, going by today’s weather wash out. That wasn’t going to stop ‘Apocalypse Dudes Promotions‘ from staging their annual Christmas punk extravaganza at Brighton’s premier punk and rock bar, The Pipeline. It’s a cool little venue near the seafront with an upstairs space for bands to play, for all the people who haven’t had the pleasure to spend a night there yet. It hosts an excellent punk rock jukebox (where else can you hear ‘Hard Skin’ songs in a public bar?), plus they serve great vegan food. 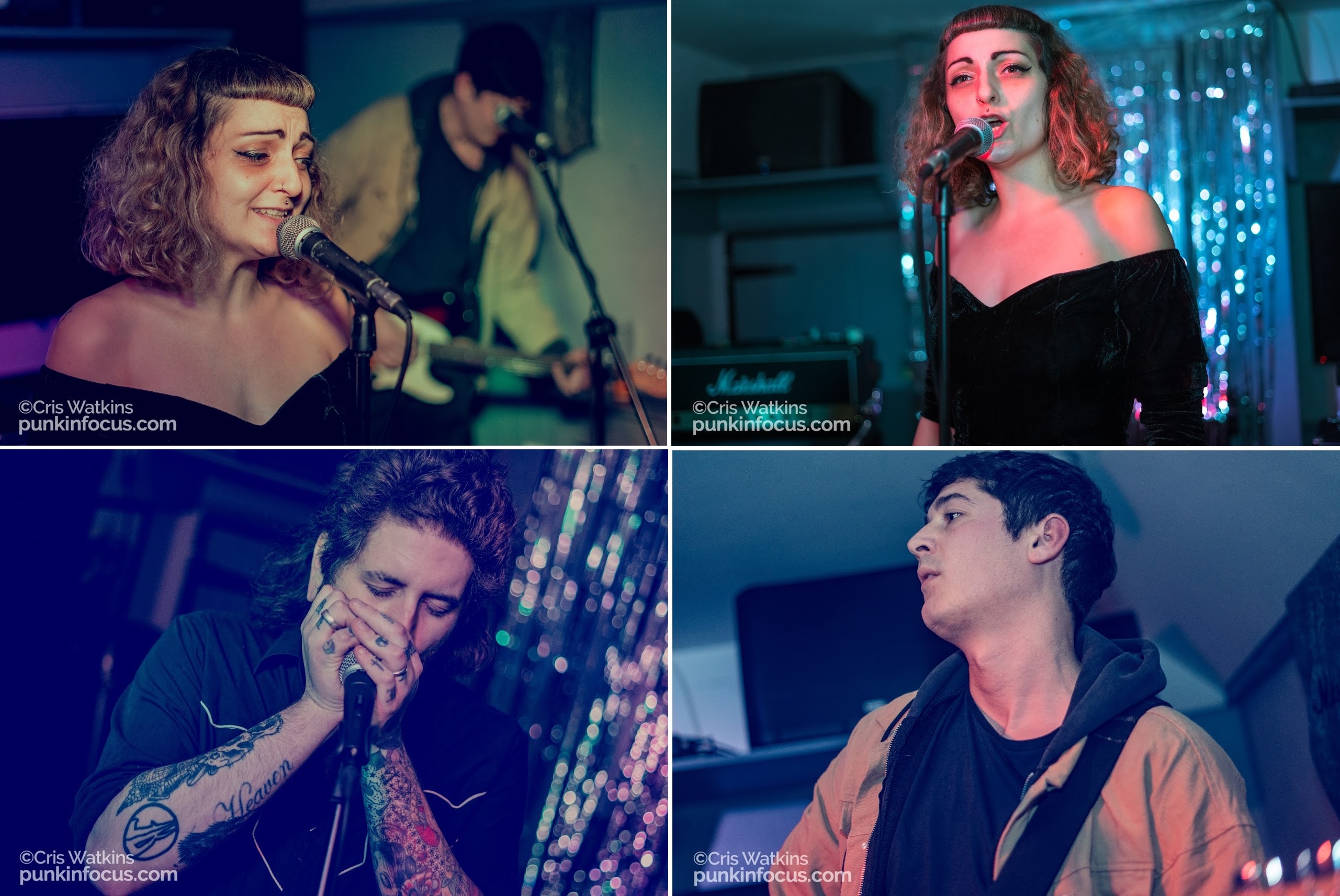 Tonight was a showcase of local talent and a big Christmas party of course. Today, is known as ‘Black Eye Friday’ but to open tonight we had the much brighter proposition of seeing ‘Black Cat & The Boy‘ play instead. They hail from Brighton and play a collection of Blues classics along with some true hidden gems from the 20’s onwards. They originally formed 6 years ago as a two piece but added Jimi Dymond from ‘Rotten Foxes’ on harmonica around 2 years ago to form the solid line up it is now.
The line up is Ariella (vocals), Si (guitar) and Jimi (harmonica).

Their music was a good start to the night and a tonic for those wet and windy Christmas blues. Ariella is a really good front person with an excellent bluesy vocal to boot. Some of the lyrics were quite racey and would have sent Mary Whitehouse into a spin. One of the songs, ‘Shave Em Dry’ (originally by Lucille Bogan) would make a sailor blush and it’s pretty mad that this song was written in 1935! The band got a very warm reception from the gathered crowd tonight. Si was spot on with his blues guitar work and Jimi is a really good harmonica player. I look forward to seeing them play again in the future. 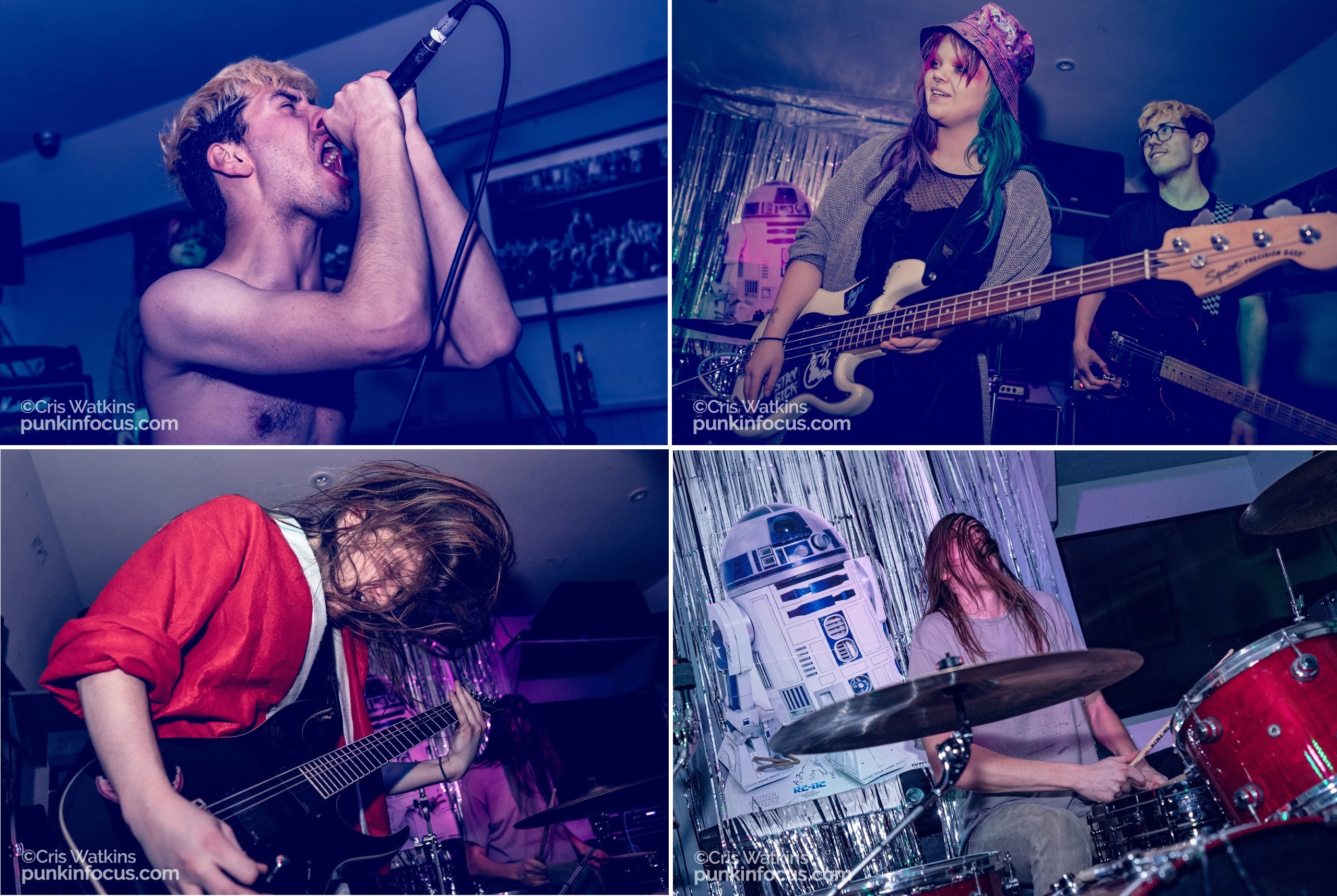 Next up, were ‘Negative Measures‘ who I’d seen many times before (mainly at The Cowley Club). They are from Brighton and formed in 2014 as a reaction to the rise of the far right in Britain. I imagine they have plenty to write about in today’s political climate. They play a blend of metallic hardcore mixed with punk and have released two EP’s on their own label, ‘Big Word Records’. (Their latest being ‘The Time Waste Continuum’).
Band personnel are: Jack Goring (vocals/guitar), Tommy Ashcroft (guitar), Hannah Waterman (bass) and A.J (drums).

As it was a Christmas party, they started their set fittingly with a cover of ‘All I Need For Christmas Is You’. Tommy (guitarist and birthday boy) took over on vocal duties and hit all of Mariah Carey’s notes (smiley face!). The crowd lapped it up, but by song two, it was business as usual and before you knew it, Jack was back on the shouty stick and running through the crowd like a whirling dervish! They have come on a long way since I first saw them and nowadays they make for a very tight hardcore outfit. Midway through the set, Hannah said something derogatory about Boris Johnson which raised a hearty cheer (myself included). The last song was back to Christmas frivolity territory with a cover of Wham’s ‘Last Christmas’ which wouldn’t have been out of place on a ‘Fat Wreck’ compilation back in the day. A good fun set indeed and more power to them. 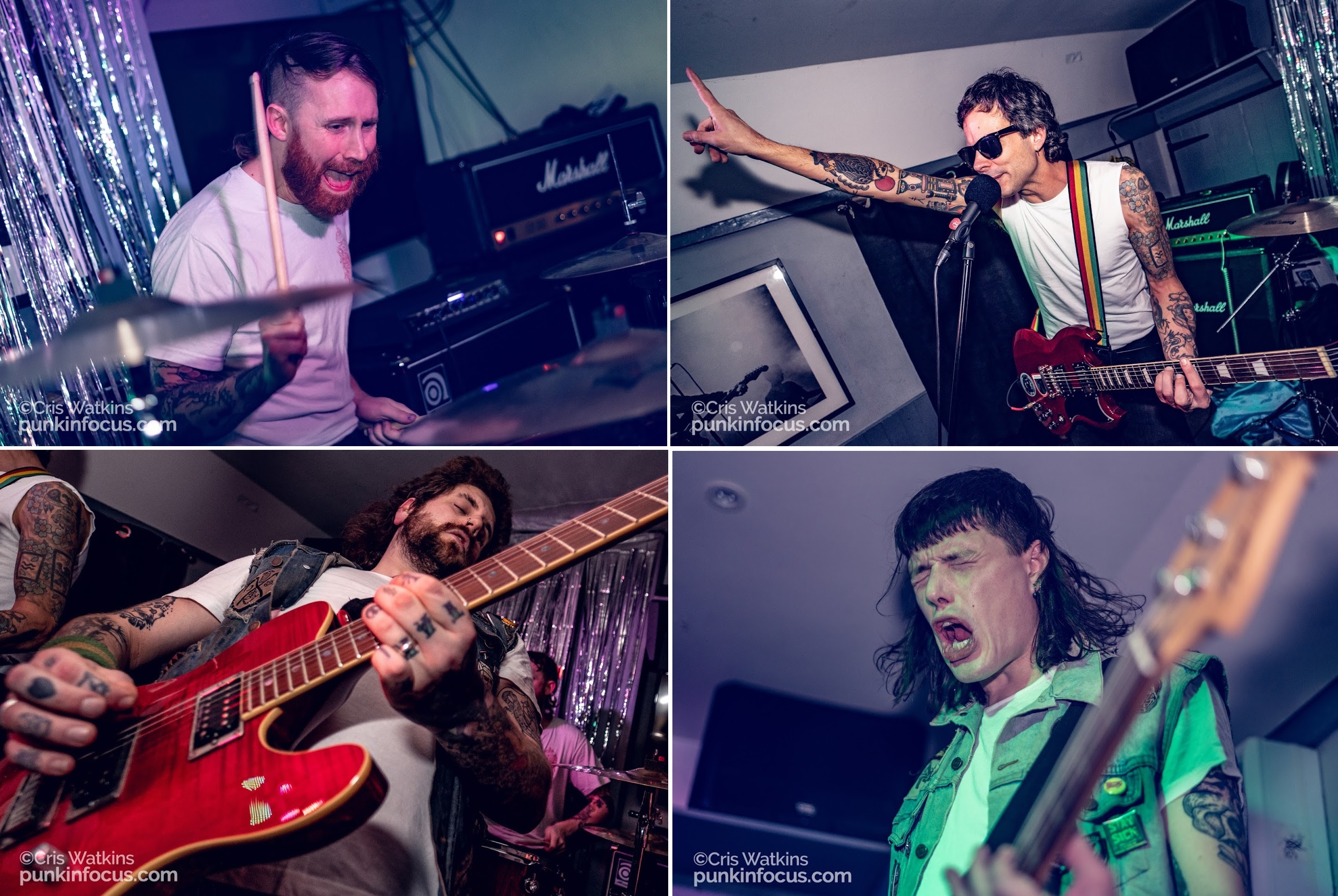 Next on tonight’s menu were Brighton based ‘Young Francis HiFi‘. Young Francis has been establishing himself as a LoFi one man band for a good while now, but he debuted this full band line-up earlier in the year. ‘Rotten Foxes’ are no more but it seems the band have miraculously morphed into the ‘HiFi’ in Young Francis’ garage punk creation. Maybe they will become the Muscle Shoals rhythm section of the Sussex Garage punk scene?
Band line up: Young Francis (vocals/guitar), Jimi Dymond (guitar/backing vocals), Mac Daddy (bass) and Danny Joe Handsome (drums).

The Berlin born band leader describes their band and sound as “Bubblegum punk, playing 2 minute sugar sweet songs about heartbreak, getting high and hanging out”. And who am I to disagree? They were a lot more harder edged than what I was expecting and considering this was their 6th gig together, they played like a band that had been together for years. The crowd really enjoyed them and for me, they were my band of the night. Tight, relentless Garage Punk played like the best of them. 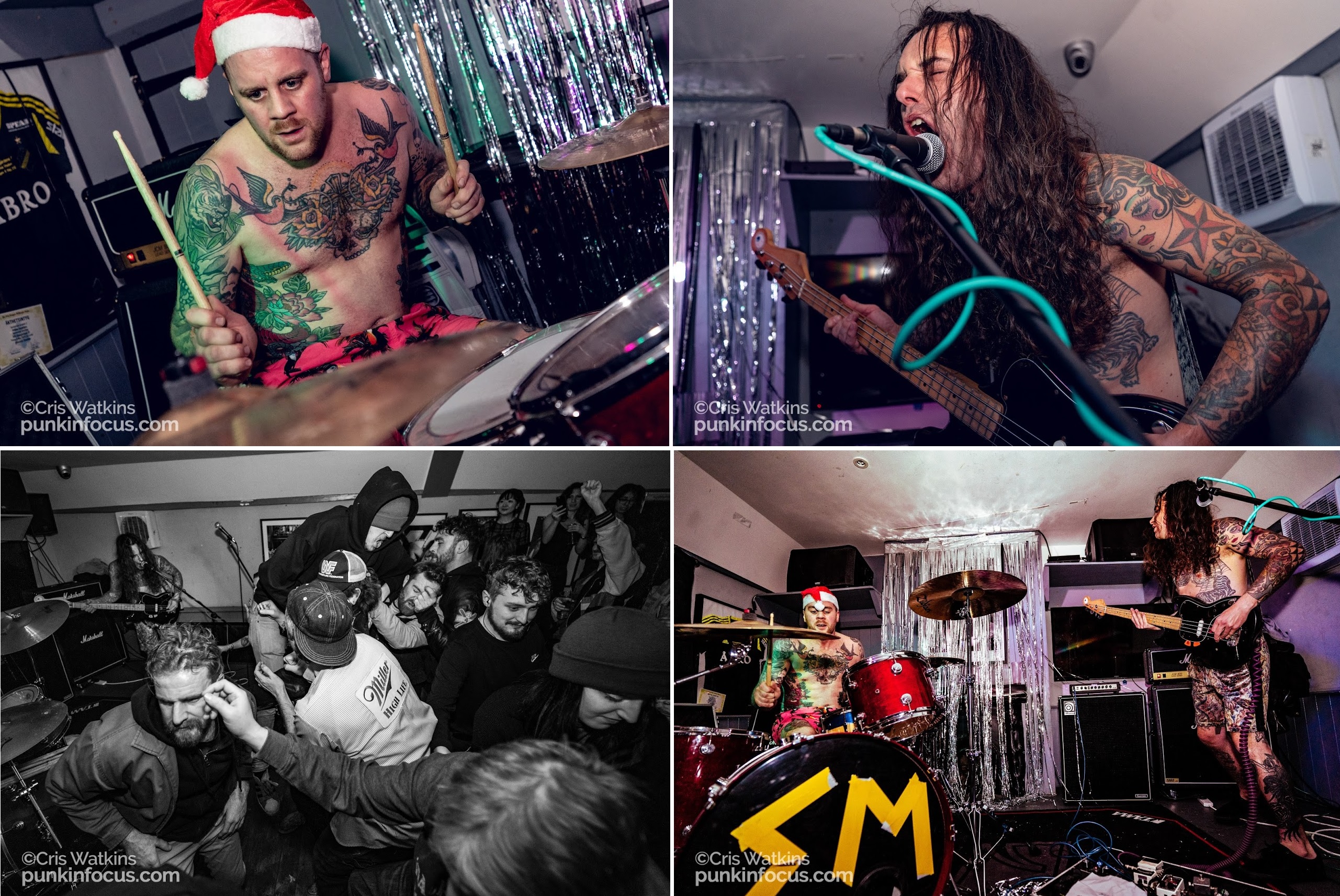 Last band of the night were the highly anticipated ‘Skinny Milk‘ (stylized as SKiNNY MiLK) who also reside in Brighton. They formed in 2016 from the ashes of early noughties punk band ‘Two Finger Salute’ and play a heavy blend of Psychedelic Garage Punk. They are a duo Johnny Hart (bass and vocals) and Tim Cox (drums) and have played all across the UK and Europe as well as releasing a number of EP’s including their latest one ‘Bones’, released earlier this year. They make a lot of noise for a two piece and soon laid waste to our eardrums with their self described “furious fuzz”! Tim the drummer was playing in nothing but his pants and a Santa hat to keep things topical. He was a very good drummer I must add who never let up on his constant ferocious drum pounding. The heavily tattooed singer/bassist (Johnny) had plenty of reverb on his vocals which made their sound quite distinct. Kind of Black Sabbath meets Hawkwind on steroids if you like! An enjoyable closing band of the night that no doubt left everyone’s ears ringing for hours afterwards.

Overall, a great Christmas party. Be sure to check out The Pipeline and all of the bands that played tonight over your veggie Christmas dinners. You won’t be disappointed….. 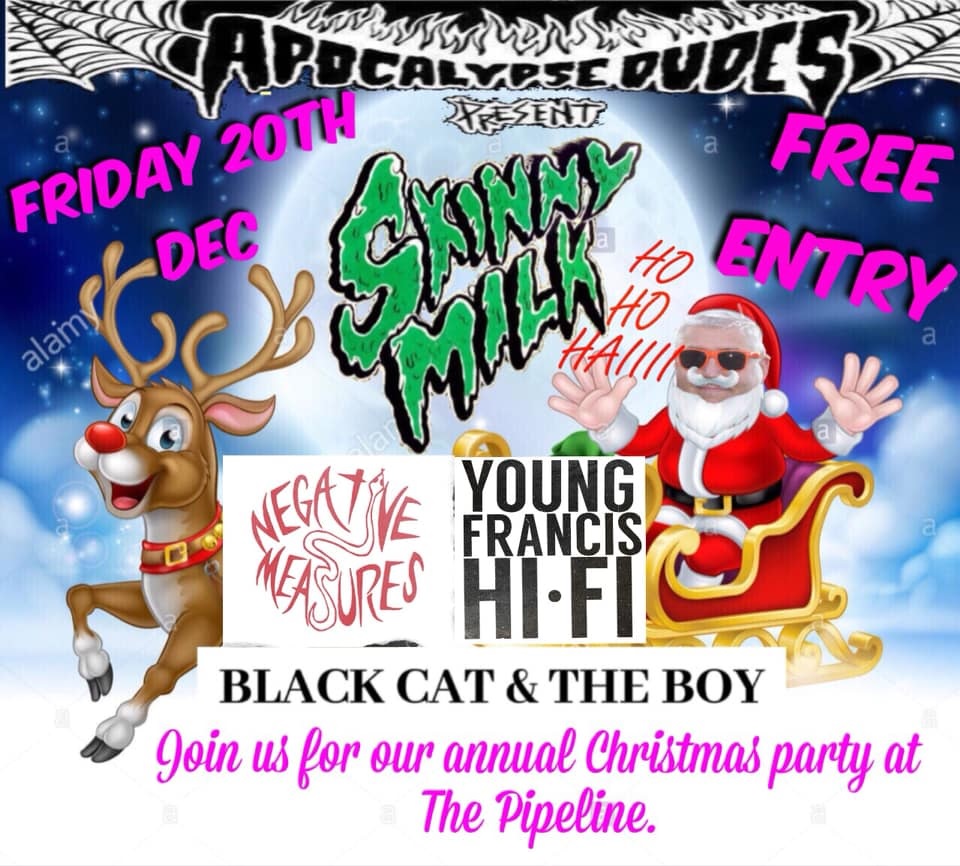