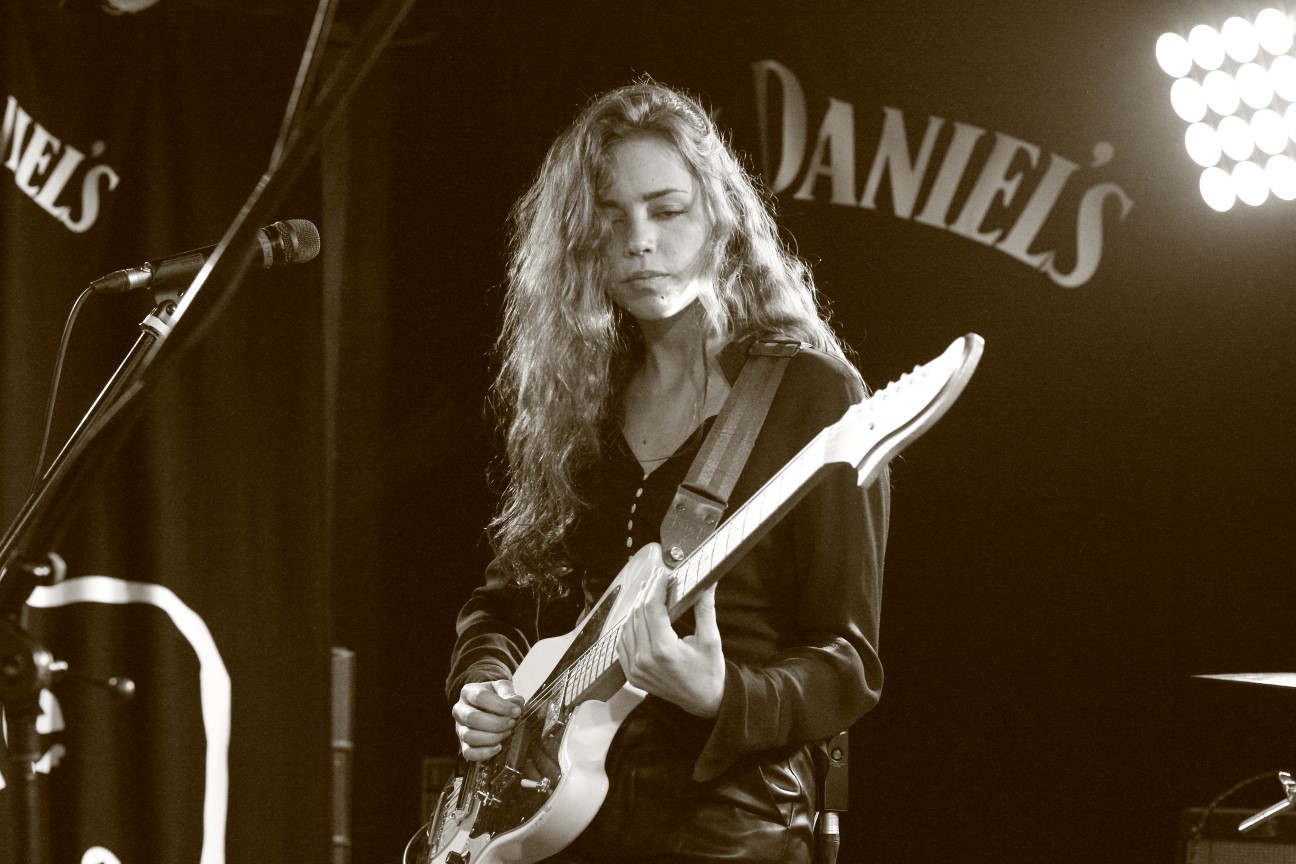 The Final day of Love Thy Neighbour’s Triptych event offering the likes of Beach Riot, Happy Couple and Our Family Dog. The night is once again hosted by the wonderful Hope And Ruin in their cosy upstairs gig space. This night looks to be the most energetic and heavy night of the three offering Rock, Punk and Alternative acts for us to enjoy. 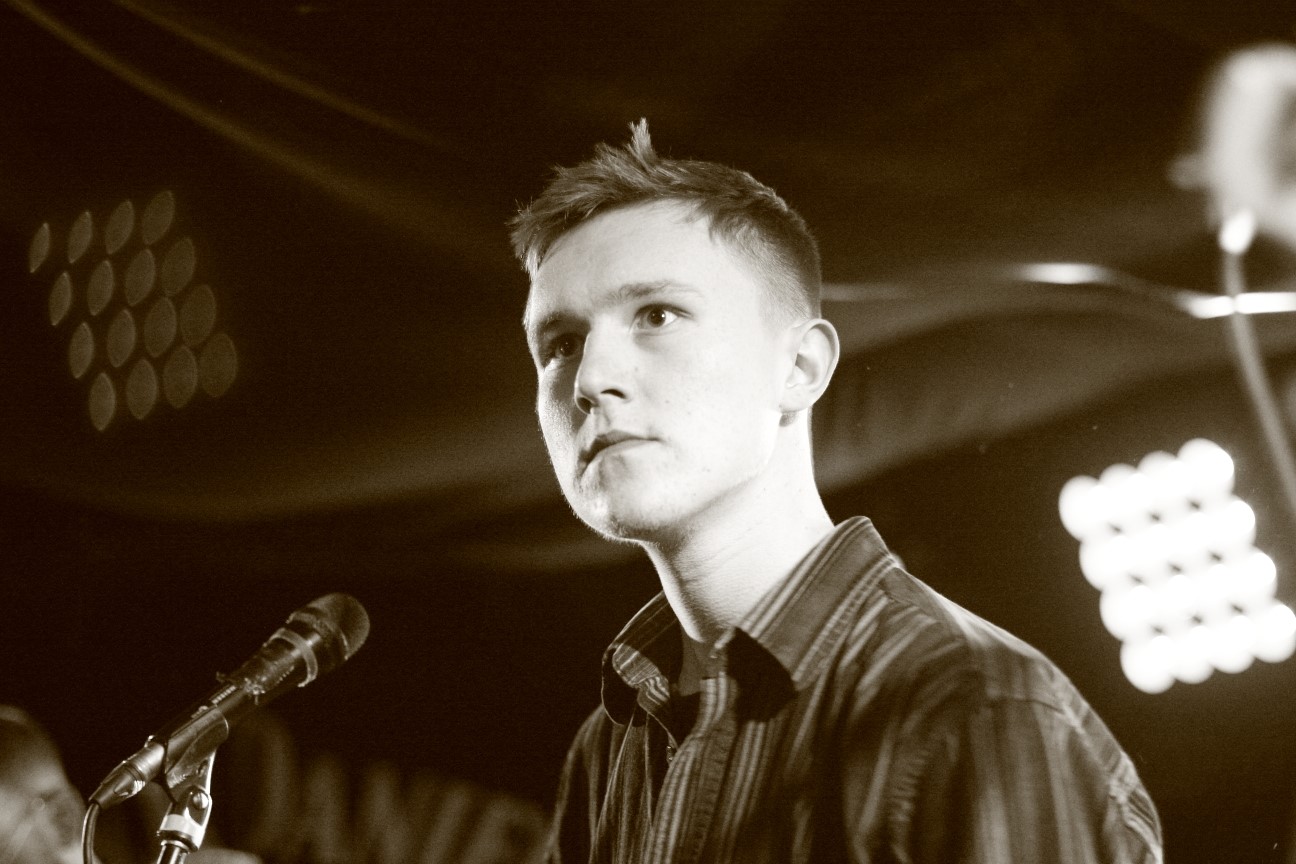 Our Family Dog
First to the stage at 8:30 is Our Family Dog. A Brighton Six-piece who describe themselves as “Drunken ramblings of a man on a comedown of his own adolescence”. They make music reminiscent of Black Country, New Road, IDLES or even a new age The Fall.

They take to the stage with a big presence all six of them really filling the space.They launch into their 8 song set full of strong powerful tracks full of attitude. It’s bombastic and heavy with sounds that punch through the air of the upstairs room. The frontman is chin jutting and leering into the crowd while he moves like a possessed voodoo man while delivering spitting shouting vocal lines. The instrumentation of the band tight and really drives home their vibe and bravado. One of the guitarists has one of the best haircuts I’ve seen in a while with a bowl cut mutton chops combo. Delivering war grooves in quick succession they really look like they are ready to kick your teeth in!

They play the track ‘All My Friends’ which really gets a reaction due to funky bass combined with provocative lyrics about the EDL. Towards the end of the show a melodica is brought out for a bit of fun and does add some new sounds to the room. They thank Love Thy Neighbour and leave the stage to applause.

I would really recommend keeping an eye on these guys because I think they have the sound and the look to really be something that will be big in a year’s time. For the limited vinyl the track ‘Mouldy Stick’ has been chosen, it’s also available to stream. 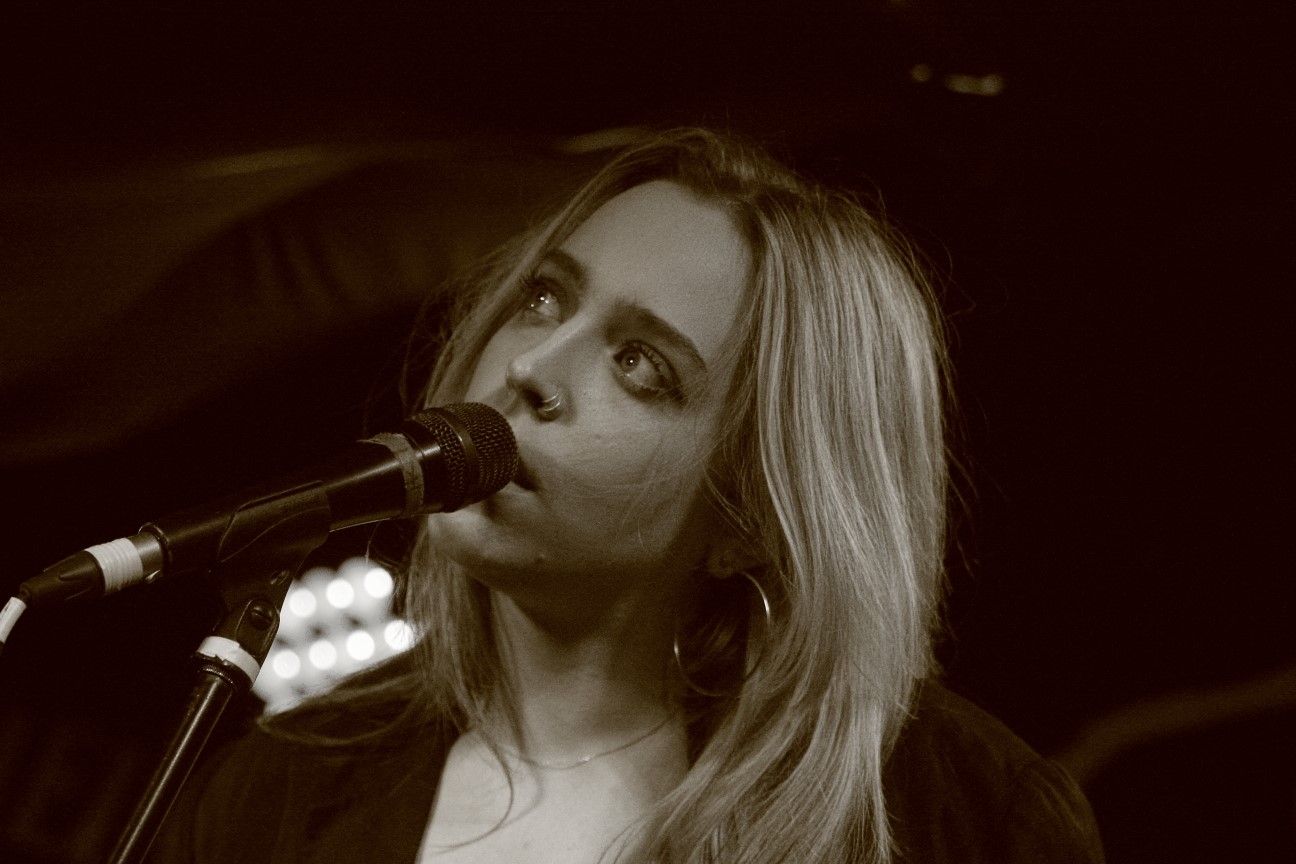 Happy Couple
Second on the bill is Happy Couple who take to the stage at 9:20. Contrary to their name, Happy Couple is, in fact, a trio comprised of Lena Pilshofer (vocal & bass), Ben Thompson (guitar) and George Miles (drums).

Happy Couple’s sound is a hypnotic mix of ethereal vocals and abrasive guitars, all underpinned by propulsive and syncopated drums. Citing influences that range from the writings of Albert Camus and Sylthia Plath. They have an aggressive intro doused heavily with fuzz from the wide range of pedals in use within the performance. Their set was plagued by sound issues from the mic being too low to really hear anything being said, to large amounts of feedback from the set up leading to a blown-out speaker sound. The drumming of the group is tight and snappy which pushes through the wall of fuzzy sound. The sounds of the group are obtuse and spiky with an air of avant-gardeness as it drones on with squealing guitar. The basslines of the group are chugging and heavy creating an atmosphere of potential movement from the crowd.

They definitely rock by creating soundscapes like blunt razor blades, being loud and deafening. Within their 7 song set they play the track ‘Split In Two’ which is actually quite enjoyable. Their last song ‘Eyes Sh*t’ pushes the fuzz and feedback to another level creating a screeching mess that caps of the experience.

The track ‘Feel Better’ has been chosen for the limited triptych vinyl and is also now available for streaming. 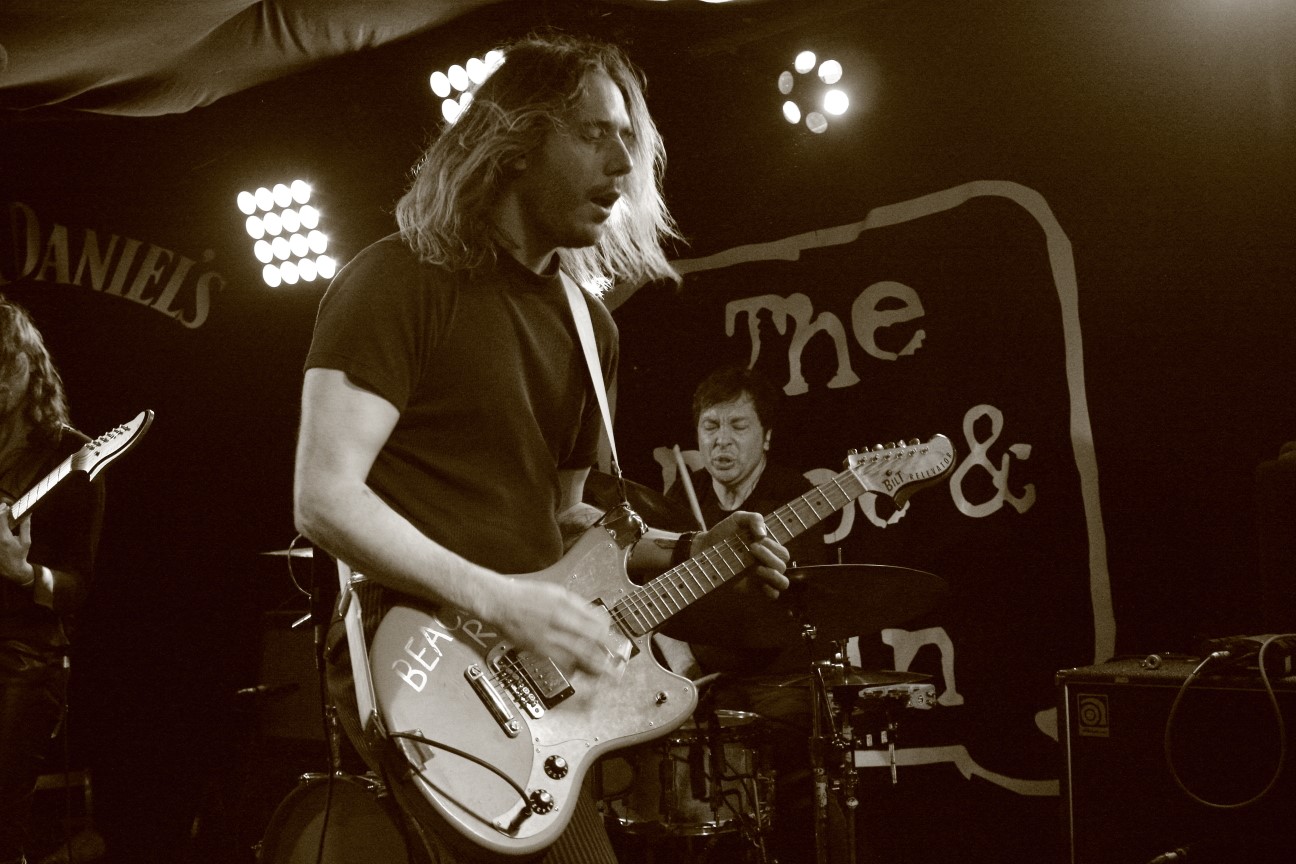 Beach Riot
Rounding off the event is Beach Riot, who take to the stage at 10:10 pm. Beach Riot formed back in February 2017 and started playing live at beach bars, parties and venues on the South Coast to support two previous single releases that picked up natural support from John Kennedy at Radio X and BBC Introducing, followed by a number 12 on the Amazing Radio chart and a slot at Reading and Leeds Festival.

The four-piece take to the stage and make a real intro with the use of cymbals and a sh*t load of pedals. Their sound is energetic and heavy, being driven at 80mph the gig space of The Hope and Ruin quickly flicks into a mosh with pints going everywhere. Their sound is complex and textured, never leaving time to breathe as the shredding guitars scream grooves over the audience. The combination of male and female vocals work well for the bands sound and adds some diversity to the music. The crowd is thoroughly throwing themselves around over an ice rink of spilt drinks, people are falling and lashing but everyone is really nice and has a good display of crowd etiquette quickly helping up any of their fallen brothers.

The band play this effortlessly, being perfectly in sync and splattering the crowd with sparkling overdrive. The gig was an energetic drunken haze with most of the audience sweaty and bruised. The surf-punker tunes go down a treat as everyone leaves content. Looking forward to the next Triptych!

I really recommend giving these guys 2018 Beach Riot EP a listen for some fun energy-rich tunes. A live version of their song ‘Stuck Inside’ has been chosen for the limited triptych vinyl and is also available to stream or purchase through Love Thy Neighbours Bandcamp. 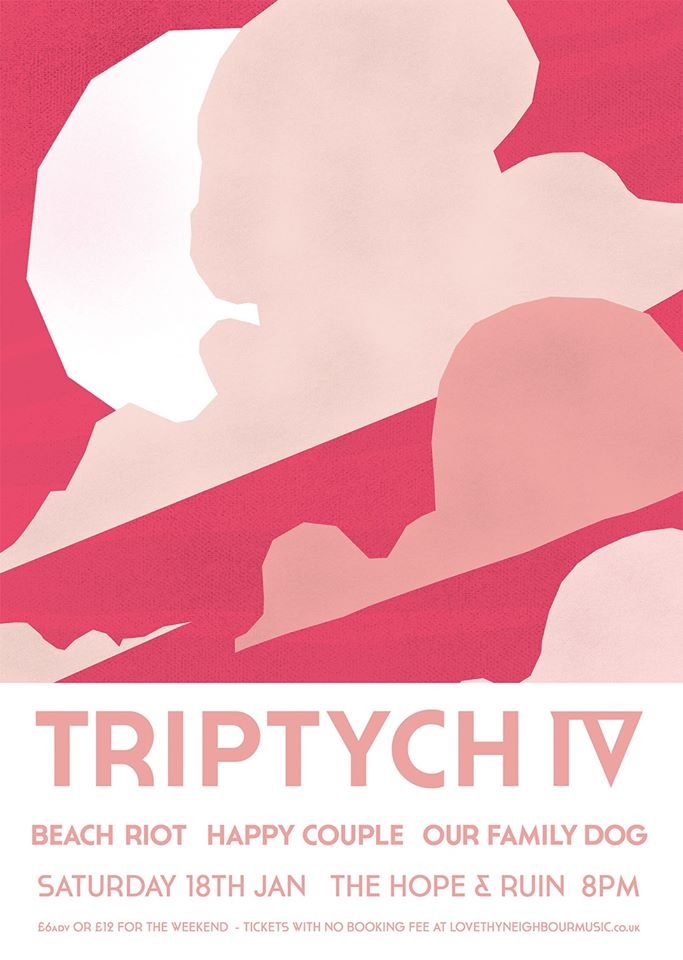