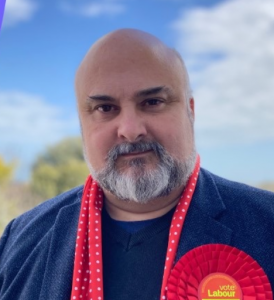 Below are the responses from Labour candidate Paul Richards.

People across Sussex, from Crawley to Chichester, from Brighton to Bexhill, are telling me it is time for a change.

After a decade of the Conservatives, crime in Sussex is up and police numbers are down.

People are looking anew at Keir Starmer’s Labour Party and seeing that Labour is back as the party of justice, security, law and order.

2) More support for victims of crime and for witnesses. With the Tory courts backlog, the danger is that cases will not come to court for years and victims will not bring prosecutions.

3) More investment in preventative services like boxing clubs and sports facilities, like the BMX track I visited in Sidley, Bexhill, the other day.

The role provides some visibility and accountability in ways a committee doesn’t but until we get higher turnouts, the role will lack legitimacy.

I believe the current set-up is wasteful. For a start, I would donate half of my salary as police and crime commissioner to police and victims’ charities and cut down on central expenses.

Yes, there should be a two-term limit. This should not be a job for life but, instead, be the chance to serve your community.

If you can’t achieve what you want in eight years, you probably aren’t going to.

There is a huge job to be done to build trust and confidence between Sussex police and people of colour, ethnic minorities, and other marginalised communities like migrants and refugees.

We need to rebuild trust with the LGBTQ-plus community and with women after the Shana Grice case.

Trust can only be built painstakingly but it starts with police training and procedures.

I will look at the results of the pilot scheme in Sussex for the use of serious violence reduction orders (SVRO) to tackle knife crime.

If “stop and search” is disproportionately affecting one ethnic group (which it is), then we must look at it again.

The Sussex Police stop and search scrutiny panel must be allowed full access to the figures and its recommendations must be taken seriously.

The right to protest peacefully is enshrined in our law but it must never be abused by fascists or racists who make our streets unsafe.

The police need to police demonstrations with greater sensitivity if it is clear public safety is not under threat, such as the recent vigils in Brighton, Shoreham and elsewhere.

But there’s zero excuse for abusing or attacking the police.

I would start with male culture, attitudes, language and actions – and a robust programme of education and explanation about what is and isn’t appropriate.

I would ensure all police are trained to take women’s complaints seriously.

I welcome that police forces are recording crimes motivated by sex or gender, in effect making misogyny a hate crime.

We need more police on the streets, for example, along Brighton seafront, where women are routinely harassed, and use the full power of the law to prosecute offenders.

The murder of Shana Grice is such a terrible tragedy and raises such important issues about how women are treated within the criminal justice system.

I would start with the recruitment process, initial police training, ongoing professional development and, at every stage, train men how to deal with women’s concerns.

I would push for more women officers to be recruited and end the old-fashioned canteen culture where it still lingers.

How do we get the police to work with councils, to patrol where and at the times people want them to?

I am concerned about rising rural crime, including theft of agricultural equipment, damage to property and illegal blood sports.

The key is my plan to put more police on the beat, including in Sussex villages and rural areas.

I am 100 per cent committed to Sussex Police enforcing the 2004 Hunting Act, introduced by the Labour government, which bans the hunting of foxes, deer, hares and mink with dogs.

There is no excuse for blood sports and no place for it in our rural communities.

I have nothing against the spectacle of local hunts. The law allows drag hunting. Nor am I opposed to shooting or angling.

I favour a public health approach to addiction and treatment, helping people avoid drugs or beat their addiction to drugs.

The criminal justice system should be focused on the organised crime gangs profiteering from drugs, not those whose lives are ruined by them. Sussex Police must continue to focus on disrupting county lines and protecting young people.

More police, closer to our communities, more support for victims and witnesses, more investment in youth services and sports. That’s the difference a Labour and Co-op police and crime commissioner will make.