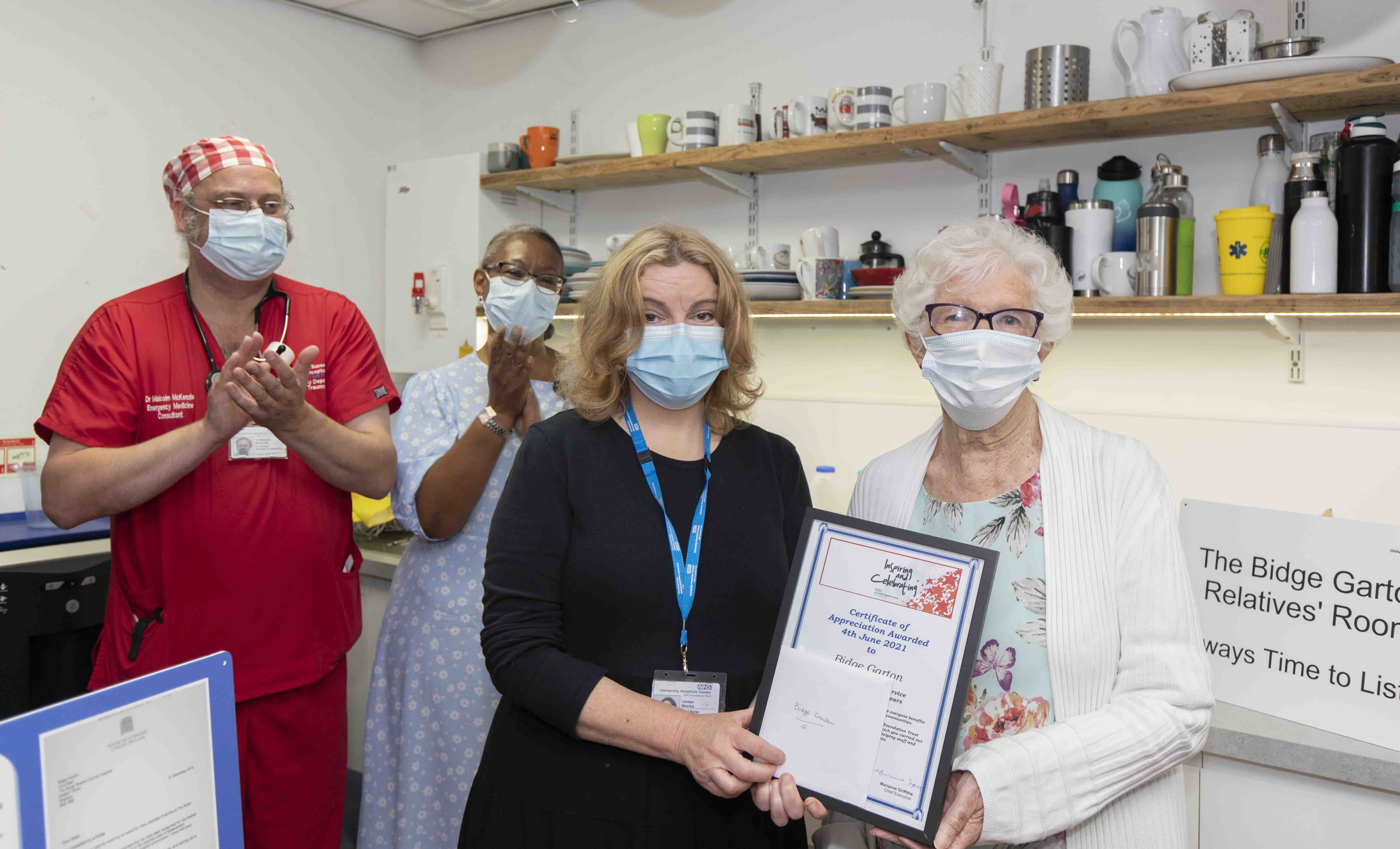 A family room at the Royal Sussex is to be named after a volunteer who has helped patients at the Brighton hospital for 38 years.

Bidge Garton has helped comfort and reassure thousands of patients, including victims of the Grand Hotel bombing and casualties from the Fat Boy Slim free concert.

She is now stepping down and last week, friends and colleagues gathered to give Bidge an emotional send-off in the A&E staff room, surrounding a table full of well- wishing notes, leaving gifts, and doughnuts – the treat for staff Bidge would always bring to work with her.

“Angel of the night,’ ‘life-saver’, ‘amazing’, were a selection of tributes made to Bidge from patients and relatives over the years.

A&E Matron, Will Rowell, said: “That’s what she is – a legend. Bidge would always help colleagues, always comfort us when we needed comforting. Always be there to reassure relatives, always know what to say.

“She has been here forever, she is part of A&E. She is going to be missed. We need to find a Bidge Mark 2 – but I don’t think there is one out there. I am so proud to be able to say thanks you.”

Volunteer Services Manager, Julie Wiseman, has worked alongside Bidge for 19 years. She said: “Bidge is nothing short of a legend. She has provided reassurance, comfort and kindness to patients and relatives and supported the medical and nursing teams for all these years.

“She used to be known as the Owl of A&E because she would start her shifts late in the afternoon and still be here way after midnight – even on Christmas Day.

“She has seen everything there is to see in A&E. She’s been knocked down but always gets back up again. She has been a superb liaison between patient and relative and staff.

“Bidge never volunteered for recognition, for awards. But along they have come. Local newspapers and national newspapers, national healthcare awards, here at the Trust, meeting the Queen herself at Buckingham Palace.

“It would be impossible for Bidge to go unnoticed. She is going to be so missed.”

Chief Nurse Carolyn Morrice, representing UHSussex, welcomed Bidge as one of the team. She said: “Bidge’s achievements here are outstanding and on behalf of the organisation, I want to say a heartfelt thank you. She will be missed and we wish her well.”

After the event, Bidge said: “I only came to clear my locker! Really, I am overwhelmed by this today. It is so, so sad that I am leaving, I can’t tell you how sad. I’m just going to have to accept it.

Bidge joined the hospital in 1983 and first volunteered on a ward before moving into A&E in 1984, where she would remain for nearly four decades.

Over the years Bidge has raised thousands and thousands of pounds to pay for facilities in A&E and also implemented a 999 Teddy Bear Club, where primary school-children would come to visit A&E, sit inside an ambulance and bring their Teddy Bear along to be x-rayed, so they could familiarise themselves with the inside of a hospital.

“That is one of my favourite memories,” said Bidge. “I really enjoyed that. Over 4,500 5-year-old’s from all over Brighton and Hove.

“There’s been so many memories. Meeting the Queen and the Duke of Edinburgh at Buckingham Palace. But I think I just like listening to people, helping people – that’s why I started all those years ago.

“Going home at night, knowing that I have helped someone who is going through one of the worst days of their life, that’s probably what I take with me the most.”

The mother of three, grandmother of six and great-grandmother of two was thanked by Her Majesty the Queen in 1999 when she represented the hospital at a Buckingham Palace reception.

In December, she became one of the very first people to be vaccinated in Brighton when jabs started at the Royal Sussex.

Now, the relatives room where Bidge spent “thousands of nights, talking with thousands of people” is to be renamed, The Bidge Garton Relatives Room – Always Time to Listen.

She said: “I am so proud about that. I spent so much time in that room, so many people in there with me, so many memories. It’s amazing that the hospital has done that for me.”

Now Bidge has some time on her hands, she plans to spend it watching cricket at the county ground in Hove – cheering on her grandson, George Barton.

“My grandson, George, is a professional cricketer and plays for Sussex. So that’s what I ‘ll be doing. Watching him bowl – fast!”