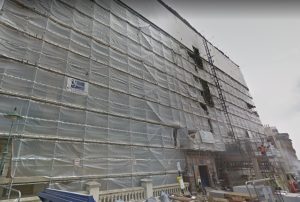 A judge has set the date for two building firm bosses to face a trial by jury after a worker died as a hotel in Hove was turned into flats.

John Spiller, 51, and Steve Wenham, 47, are due to go on trial for manslaughter on Monday 14 March next year. Bail was granted.

They were charged after Graham Tester, 60, died while working on the flats, Dudley Mansions, in Lansdowne Place, Hove, and Brunswick Street West, on Friday 27 July 2018.

They are charged with breaking health and safety laws and failing to ensure that employees “were not exposed to the risk of injury or death by falling from height”.

They entered a not guilty plea before Judge Shani Barnes, the former honorary recorder of Brighton and Hove at Brighton Crown Court last Thursday (3 June).

Mr Tester died after he fell while working on the roof of the building – formerly the Lansdowne Place Hotel and previously the Dudley Hotel.

The hotel closed in 2013 and a year later planning permission was given to turn it into flats. Work started four years ago and the flats were completed in 2019.

The full charge states that each of the men owed Mr Tester a duty of care in planning, preparing and operating roofing repair works at the site.

The charge also says they failed to “take reasonable care to plan, prepare and operate roofing repair works” in that they

Spiller instructed and Wenham caused or permitted Mr Tester to start roofing works, knowing that adequate safety measures were not in place, according to the charge.

It said that breaching their duty of care amounted to gross negligence and was a substantial cause of Mr Tester’s death.