Another Brighton bank branch to close

One of Britain’s biggest banks has announced the closure of 44 more branches, including the Lloyds branch at Preston Circus.

The decision was a “bitter blow” to staff and customers, according to the Unite union, which accused Lloyds of walking away from local communities.

Lloyds said that 29 Lloyds Bank branches and 15 Halifax branches would close, adding that customers were carrying out “significantly” fewer transactions at these locations.

“This means that, like many businesses on the high street, we must change for a future where branches will be used in a different way and visited less often.

“We’ll continue to invest in our high street presence, as this week we’re opening a new concept Bank of Scotland branch in Edinburgh, the only bank to take up residence in the new St James Quarter.

“Importantly, we’ll continue to give our customers a choice in how they bank, with branches sitting alongside telephone banking, online and mobile banking, our video appointment services, our cashback through local shops programme, our participation in the industry BankHUB cash initiative and 11,500 post offices, at which our customers can bank and access cash.”

Unite national officer Caren Evans said: “The decision by Lloyds to further erode its presence within our communities is baffling.

“The closure of 44 more bank branches will deny our communities essential services such as access to cash and experienced highly trained staff.

“A local ATM (cash machine) is not a suitable alternative to a staffed bank branch.

“In recent times Lloyds has spent significant resource to sell its message of ‘Helping Britain Recover’.

“Unite seriously questions how this decision to walk away from local communities promotes this message at a time when the customers will rely on the financial services sector support more than ever.

“Unite does not view the bank branch network as a disposable commodity and the union believes that the branch network has a value far beyond its immediate commerciality.

“Unite wants to see Lloyds Banking Group invest in the branch network and commit to a meaningful presence in our communities.” 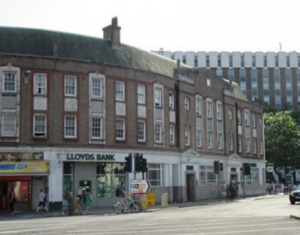 Lloyds said that many of the branches earmarked for closure had another branch “very close by”.

Lloyds added that, across the group’s branches, transactions had fallen 10 per cent a year in the five years to March last year – and significantly further in the year since.

The bank also said that nine out of ten customers had a branch within five miles of their home.

Martin McTague, vice-chairman of the Federation of Small Businesses, said: “Communities across England and Wales will be feeling a new wave of disappointment today, with the announcement of these closures coming fresh off a devastating delay to the June reopening.

“Bank branches are not only critical to those who still depend on cash – often society’s most vulnerable – they also serve as a draw for shoppers, meaning footfall for surrounding small businesses.”