Award-winning violinist Emmanuel Bach returns to Brighton to play Beethoven, Poulenc and Bazzini as well as a selection of 20th century works and lighter pieces too. 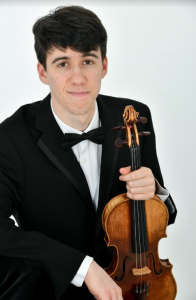 Bach is giving the recital on Friday (2 July) at St Luke’s Church, in Queen’s Park Road, Brighton, with the pianist Jenny Stern.

It is not his first appearance in Brighton, having previously played at the Chapel Royal, in North Street, Brighton.

His latest recital is part of the Music and Wine season at St Luke’s and, given the current coronavirus restrictions, pre-booking is essential.

For tickets, email musicandwineatstlukes@gmail.com or phone or text 07974 809525 stating how many people from the same household or social bubble plan to attend.

The performance is scheduled to last one hour, without an interval, and to start at 7.30pm on Friday (2 July).

Bach, who won the JS Bach prize, graduated with a double first in music from Magdalen College Oxford, then studied at the Royal College of Music with Natasha Boyarsky and Radu Blidar.

He has featured on BBC Radio 3 and played at many leading venues including the Queen Elizabeth Hall, the Wigmore Hall and St Martin-in-the-Fields.

For more information about the Music and Wine season at St Luke’s, click here.