Travellers pitch up in grounds of listed Brighton mansion

Travellers have set up camp in the grounds of a grade II* listed 18th century mansion on the edge of Brighton. 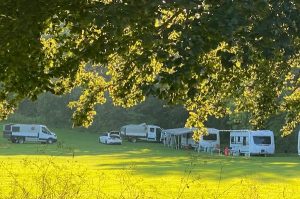 About 15 caravans were reported to have pitched up at Patcham Place, in London Road, Brighton, close to where the A23 passes under the A27 Brighton bypass.

The building – a former youth hostel – is the home of KSD Support Services although the freehold belongs to Brighton and Hove City Council.

It is also a short distance from the official St Michael’s Way travellers site, just off the A27 at Patcham.

Sussex Police were reported to have had a presence at Patcham Place at about 6pm this evening (Wednesday 4 August).

But when officers left, the unauthorised encampment remained in place.

The official traveller site has 12 permanent caravan pitches and 21 transit pitches, where caravans can be kept for up to three months.

All the transit pitches have access to water and electricity and the site includes a communal shower block.