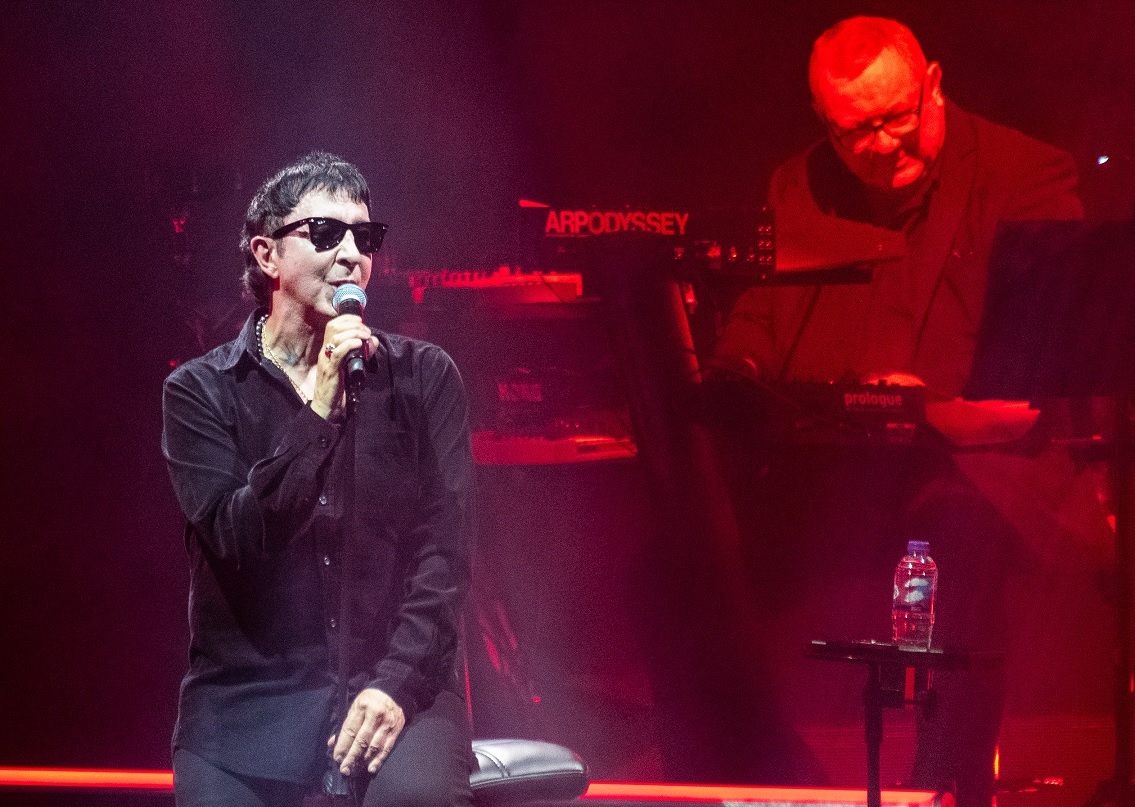 Tonight was always going to be a special night for me as my girlfriend had purchased us tickets to see Soft Cell live at the Hammersmith Apollo as part of a birthday treat. It had been just over 20 years since I last saw the synth-pop pioneers performing in person as a duo and I didn’t think I was going to get the chance ever again with them having previously played farewell gigs, but tonight was my lucky night. 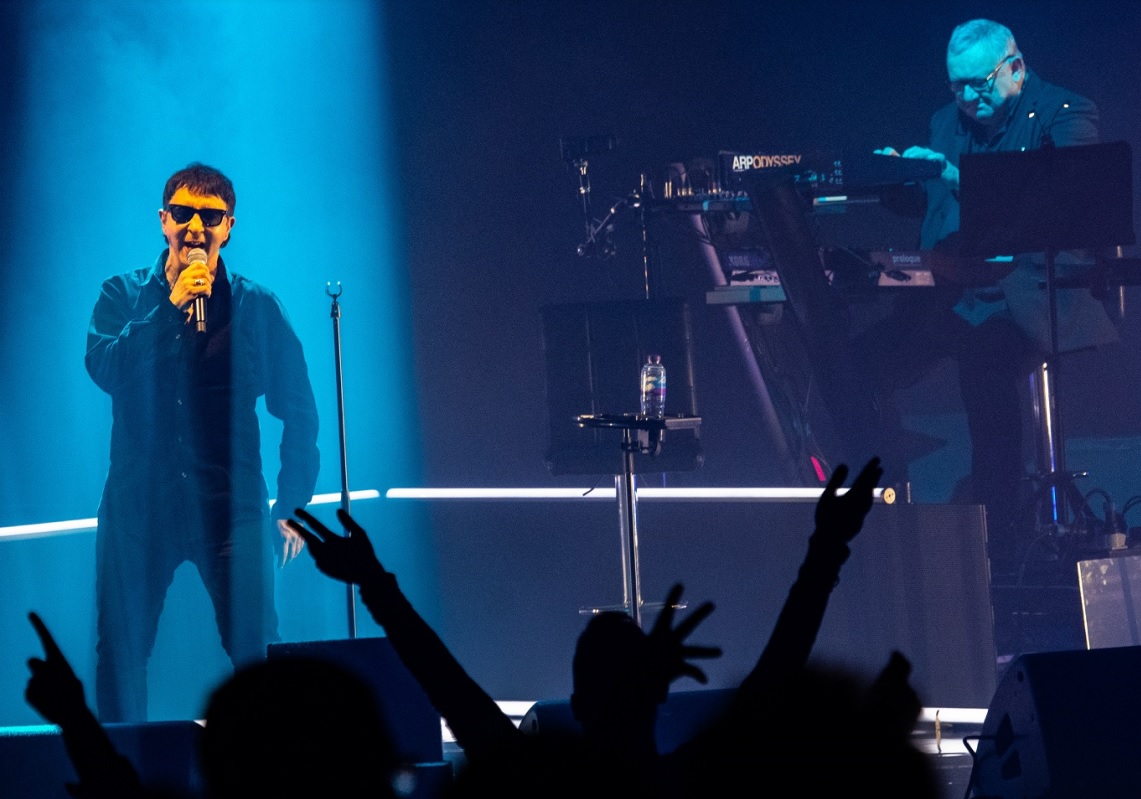 With 25 million sales, six UK top 10 singles and a BRIT Award to their name, Soft Cell are one of British music’s most visionary bands. They’ve cast a huge influence over music culture ever since, setting the synth-pop standard for Erasure and the Pet Shop Boys to follow, inspiring the industrial scene before it exploded in the ‘90s, being sampled on Rihanna’s smash ‘S.O.S.’ and laying the groundwork for the current alt-pop scene right up to Years & Years. 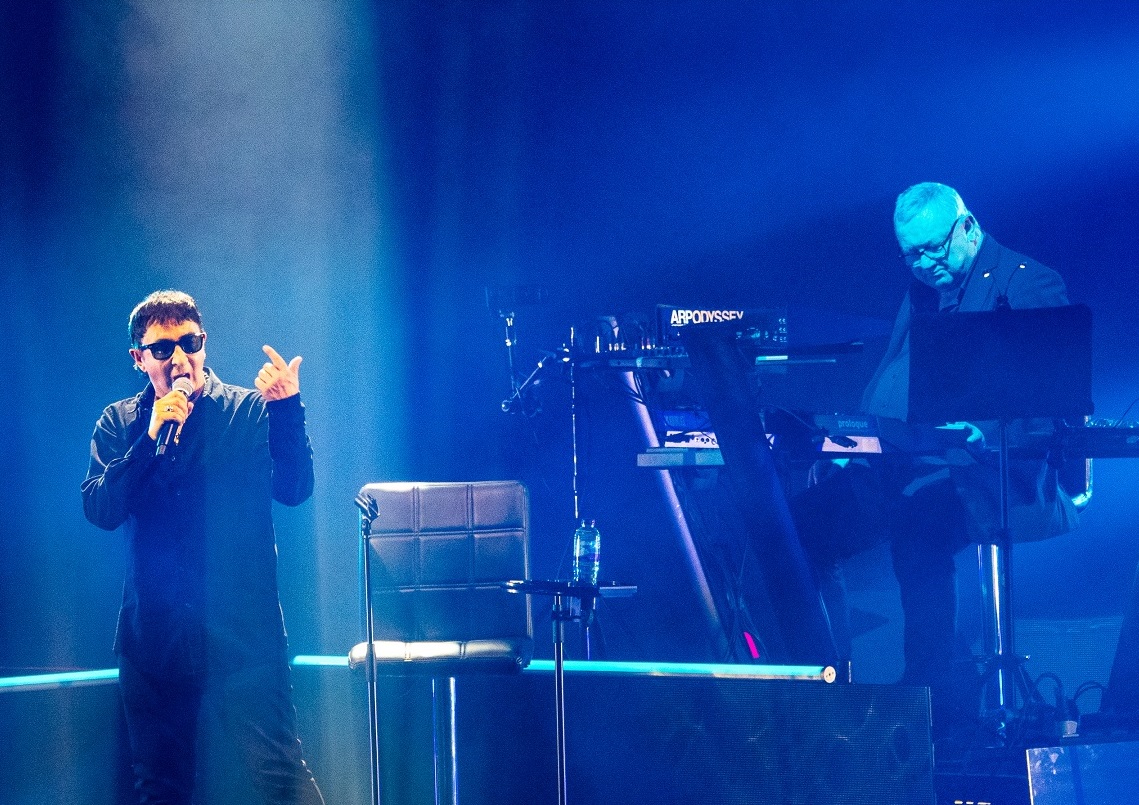 As far as I can recall, I believe that Soft Cell only played live in Brighton on the one occasion and that was at the Event II (now occupied by the Pryzm nightclub) on 24th October 2001. It was a fantastic concert where they played a 16 tune set that included the then unreleased track ‘Somebody, Somewhere, Sometime’, which was to surface on the ‘The Very Best of Soft Cell’ album in 2002. In fact, this evening they would again perform no less than 11 of those 16 tunes, but sadly ‘Somebody, Somewhere, Sometime’ wasn’t one of them. With such a plethora of material to choose from, including the forthcoming ‘*Happiness Not Included’ album, their first new album since they issued ‘Cruelty Without Beauty’ back in 2002. It’s no wonder that certain fans’ favourites get left out. For instance, I would have dearly loved to have also heard ‘Metro Mr.X’ (from the 1980 ‘Mutant Moments’ EP), ‘The Girl With The Patent Leather Face’ (from the 1981 ‘Some Bizarre Album’ compilation album) and ‘What!’ (from 1982 ‘Non Stop Ecstatic Dancing’ album). 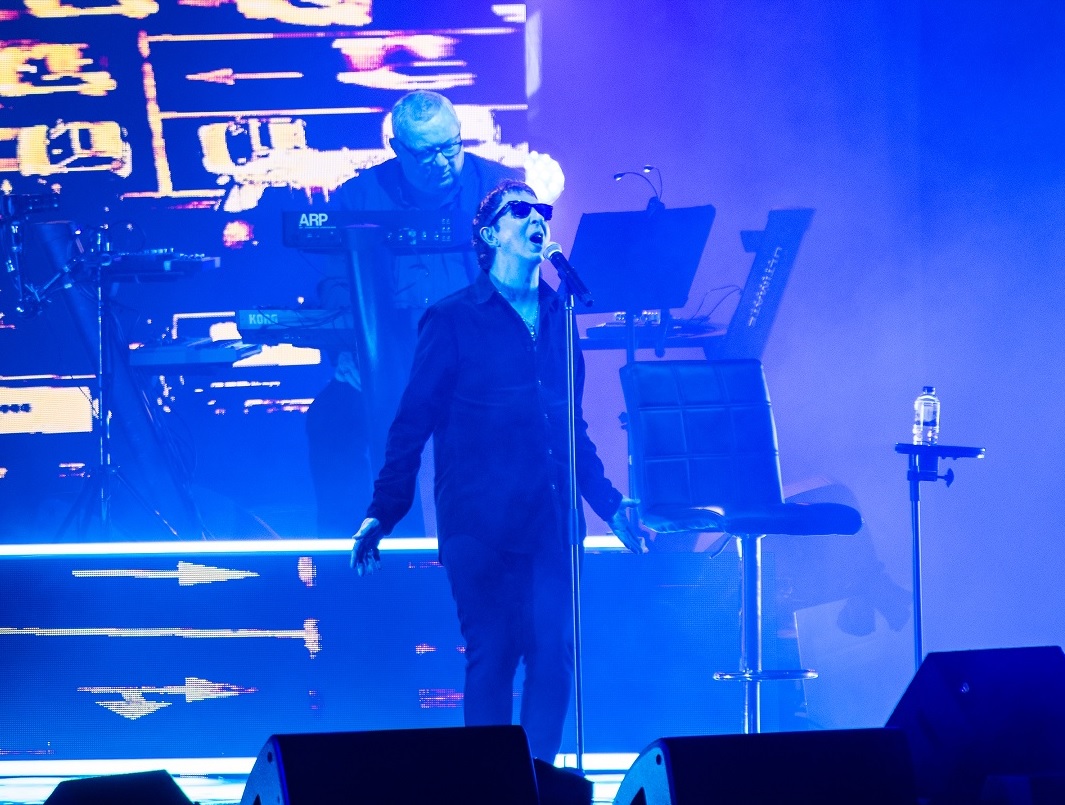 The exterior of the large venue was bathed in lights of changing colours and there in the centre were those two important words in capitals that we wanted to see: “Soft Cell”. Covid passes shown, drinks purchased, seats found and the lights dimmed at 7:58pm and for the next 59 minutes we were in the company of music legends as they gave us their first dozen tunes of part one of the show. 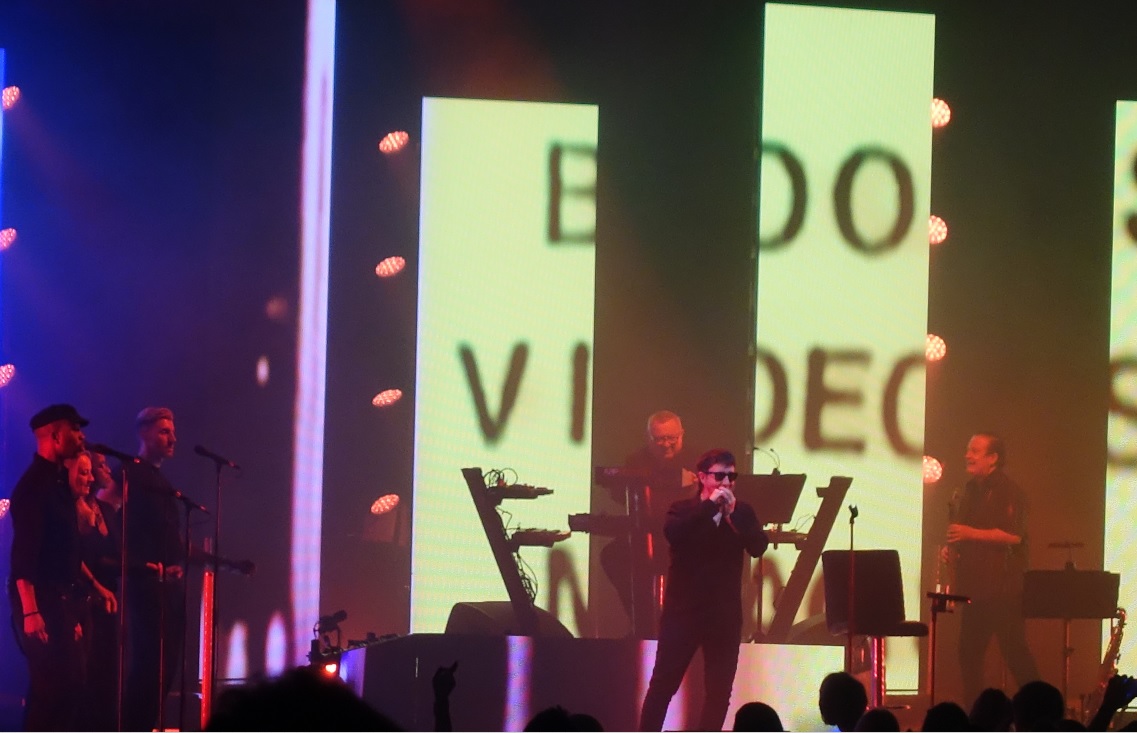 Their selected opener was the standalone 1982 single ‘Torch’. Marc was as you would expect out front seeking all of the adulation, whereas David was seated further back on a podium and hiding behind his array of technical gubbins. They were also joined (stage left, our right) by the extremely talented Gary Barnacle who is much respected throughout the industry. Stage right (our left) there were four backing singers who slowly shuffled all night long as they sang in unison and didn’t distract one’s eye from the trademark dark sunglasses wearing Mr Almond. All seven of them were clad in black. Marc had a black leather chair that he would use as a prop or perch upon from time to time and behind the musicians there were giant screens showing selected films, images and graphics that complimented each selected number. The lighting initially wasn’t over the top and highlighted the stars when required. As you would expect, this concert and tomorrow’s at the same venue, were both at full capacity. The audience were a mixture of souls from right across the spectrum, but I only spied a few real distinctive characters, which was a slight surprise. Maybe Brighton is leading the way for the Bohemian look and vibe after all. 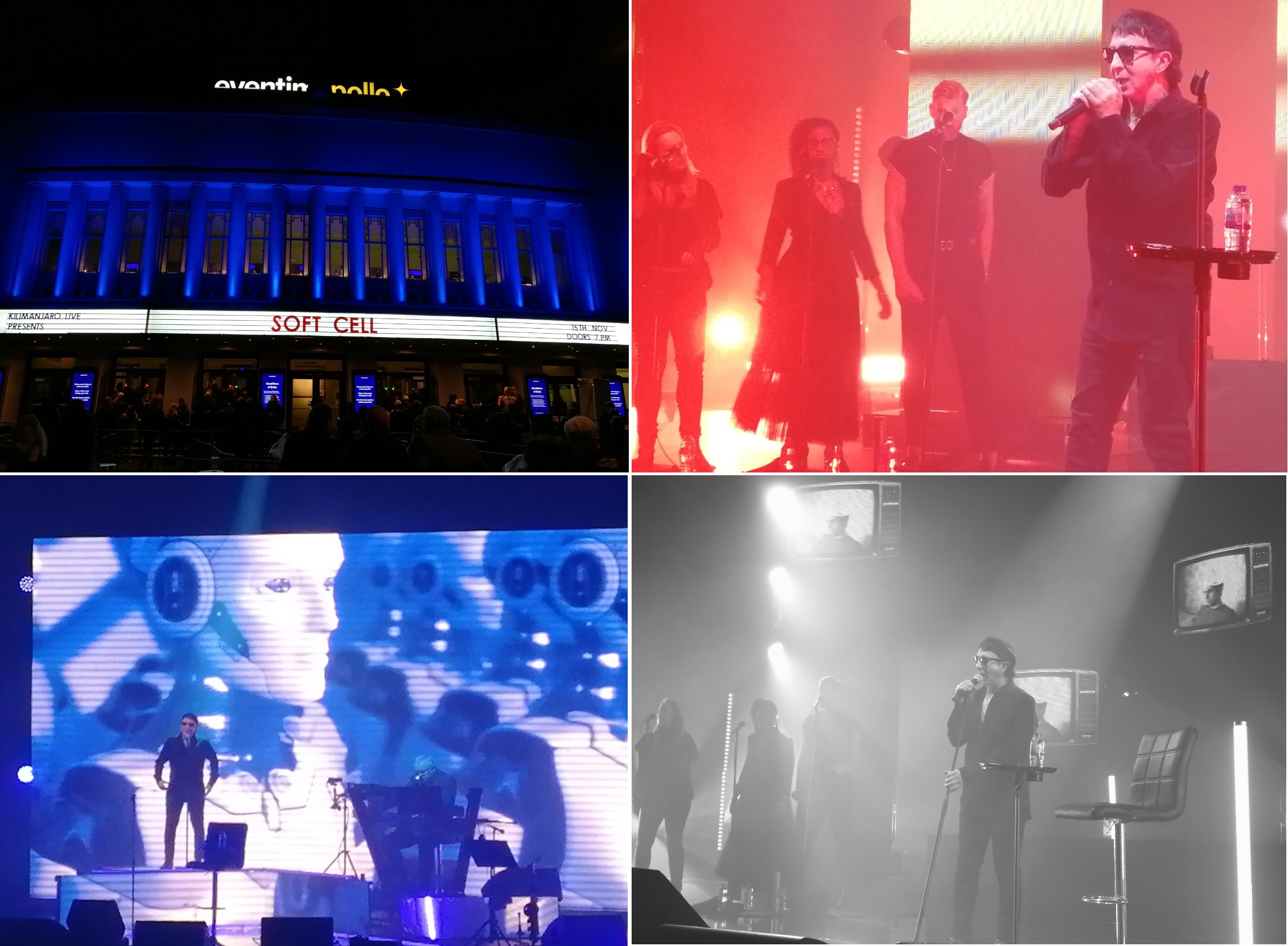 Song two, (‘Bruises On All My Illusions’) was the first of a handful of tunes from the forthcoming ‘*Happiness Not Included’ album which is due to drop on 25th February 2022, which includes the option to purchase it on a limited 140g yellow vinyl disc and deluxe hardback book CD edition. This track is a real stomper and if the other eleven tunes on the album are like that, then I will be a very happy fan indeed.

‘Happy Happy Happy’ will be the opening tune on this next album and that got an outing this evening. This was the first track tonight to be accompanied by a backing film. ‘Monoculture’ from the 19 year old ‘Cruelty Without Beauty’ album was up next. I can’t believe that this banger is that old as it truly sounds fresh. Each song was being greeted as one would anticipate but enthusiastic applause and cheers. Tonight is going very well indeed.

Having worked the crowd up into a dance frenzy, Soft Cell decided to take it down several notches with a slower number and thus unloaded their 2021 single ‘Heart Like Chernobyl’ (which will appear as track five on the next album). This has a decent synth backing and there was no backing film but just a single spot light shining down onto Marc. 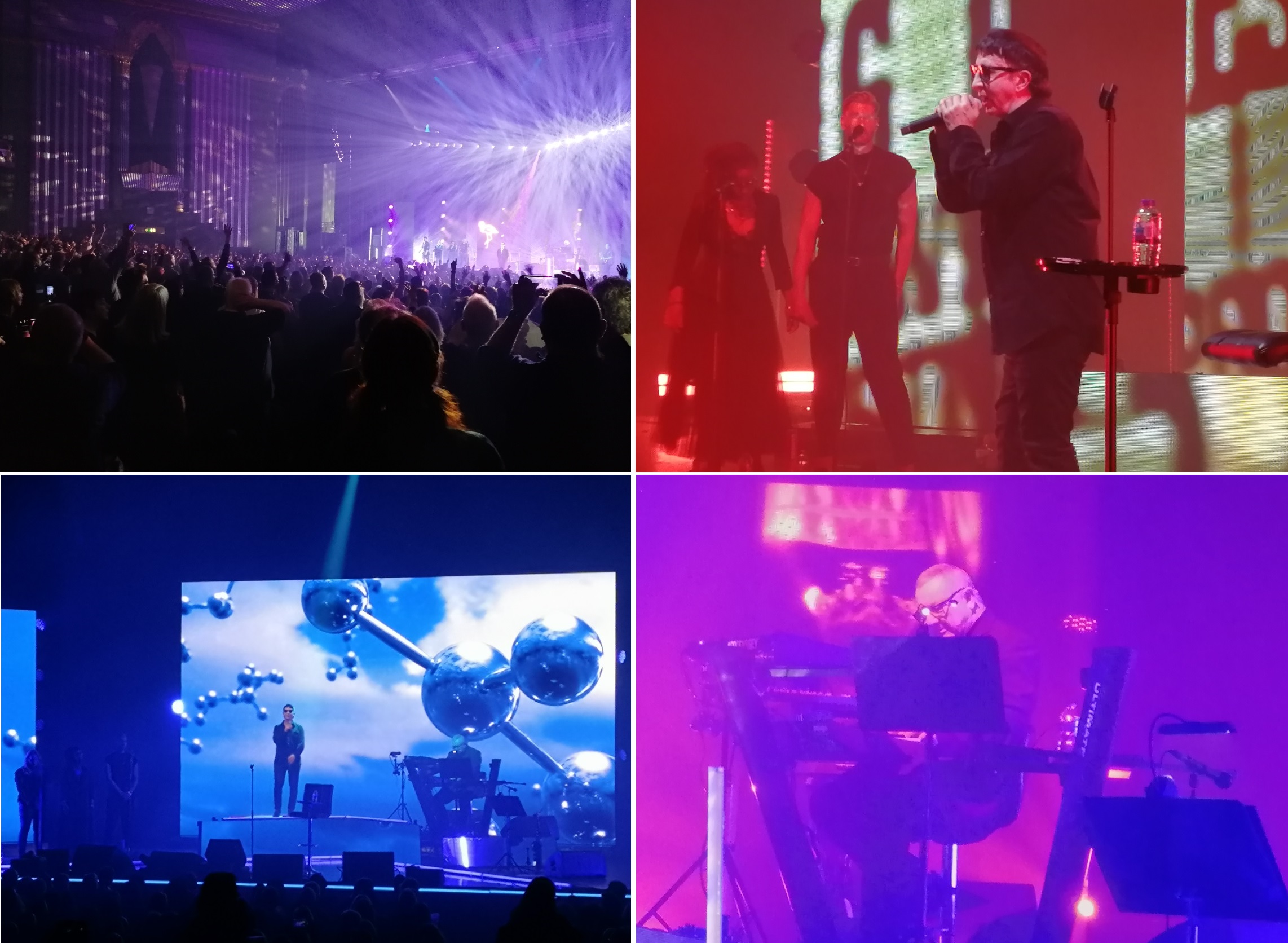 Track eight from the forthcoming album was up next. This is ‘Nostalgia Machine’ which had an impressive stomping beat and catchy chorus “Nostalgia Machine rev it up whoo”. This most certainly reminded me of Heaven 17’s 1983 classic ‘Crushed By The Wheels Of Industry’.

The first of four numbers from their 1983 ‘The Art Of Falling Apart’ album was performed next. This was ‘Kitchen Sink Drama’ which saw Marc perched on his chair to deliver the ballad of housewife woes. After that we had another slowie in the form of ‘Where The Heart Is’.

Having ‘rested’ for a couple of numbers, it was time to rev things back up again. Cue 2002’s ‘Divided Soul’, which was one of the two new compositions found on their ‘The Very Best of Soft Cell’ album. The other which didn’t get an airing was….yep you guessed it….‘Somebody, Somewhere, Sometime’.

The only track culled from their ‘This Last Night…In Sodom’ 1984 album to be performed for us tonight was ‘L’esqualita’. For me this was the only weak track of all 24 tunes performed. It was well below the others and I wish they had instead played ‘Somebody, Somewhere, Sometime’. OK I’ll let it go now!

They ended act one with a couple of tunes from ‘The Art Of Falling Apart’, namely the disturbing horror film ditty ‘Martin’ (which shocked me back in the day when it was released) and this was followed by the album’s title track which concluded at 8:57pm. 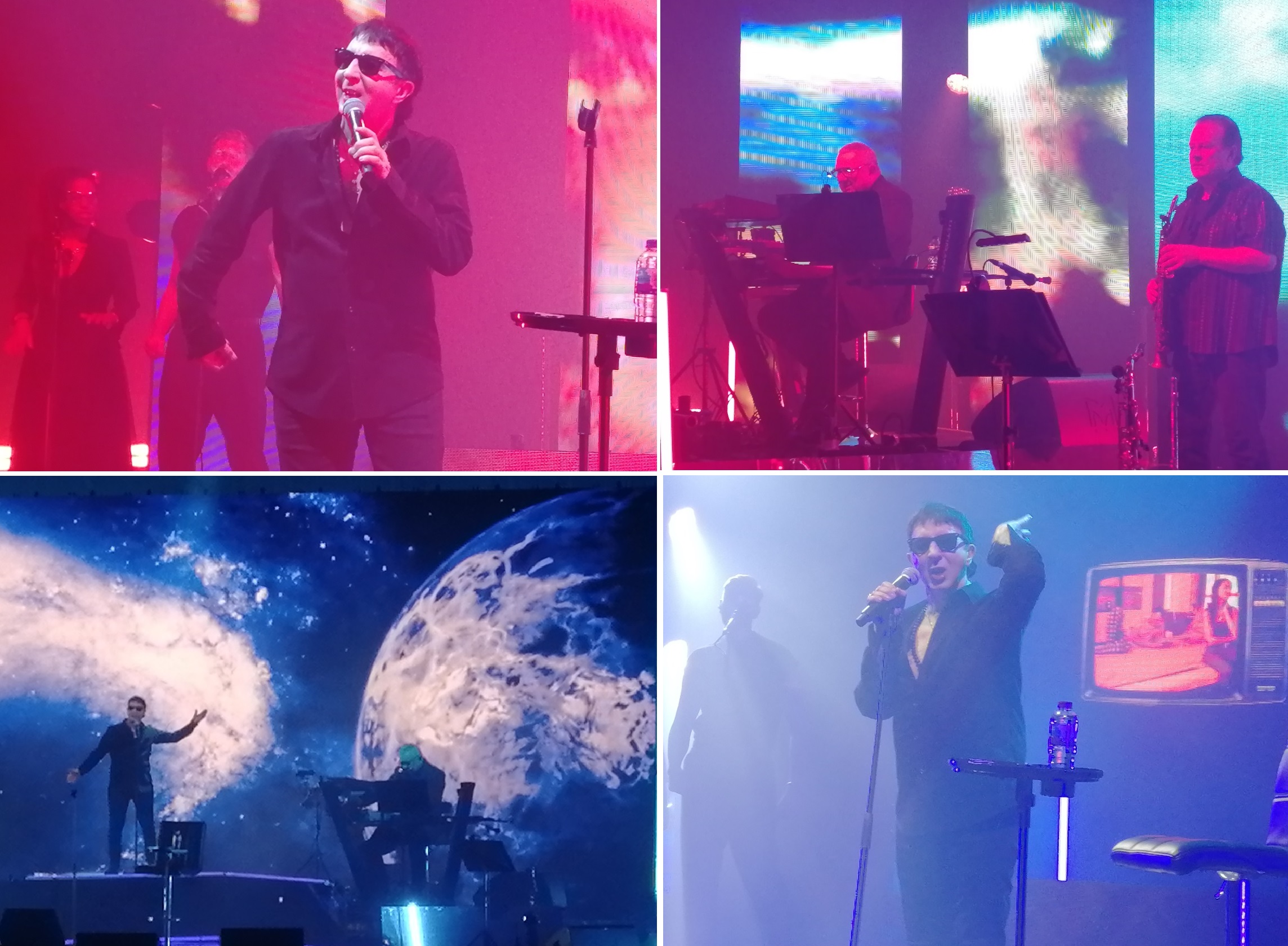 We were given a 29 minute break in order to order more drinks, check out the merch stall and make ourselves comfortable for the 12 track act two.

First up then was ‘Frustration’, which was followed by ‘that song that’s always played at parties to get folks on the dancefloor’ ‘Tainted Love’. Back in 2001 at the Event II in Brighton they had played this as the 12” mix which segued into ‘Where Did Our Love Go’. But tonight as it wasn’t on the album and only on the single, it didn’t get a look in.

‘Seedy Films’ came and went as did ‘Youth’ which saw Gary Barnacle take up the flute and it sounded great. However, both were totally blown out of the water by the legendary ‘Sex Dwarf’. You know you have certain earworm songs that you just can’t get out of your head like ‘Hong Kong Garden’, well ‘Sex Dwarf’ is one of those. I sometimes find myself singing it in my head for no apparent reason. Even the mighty Scooter did a decent cover of it on their ‘Sheffield’ album. Marc gave the crowd a few countdown’s tonight for this tune “1-2-3-4 screeeeaaaammm”. Terrific stuff!

‘Entertain Me’ was on a hiding to nothing having followed that, but ‘Chips On My Shoulder’ was a truly stunning rendition with its catchy racing Hi-NRG beat and was surprisingly one of my top faves from the performance.

‘Bedsitter’ was next and it didn’t finish where it should have. Oh deep joy, they are performing the much better 12” version with it’s deep woaw woaw beat. Well done lads! They took it down a notch as ‘Secret Life’ followed. ‘Say Hello, Wave Goodbye’ was the final number on the album and the final number of the main second set this evening and by way of a thank you, Marc took off his sunglasses to reveal his eyes. My girlfriend does the same and it’s sexy, maybe that’s why Marc did it?

They briefly left the stage at 10.12pm to return shortly afterwards in order to sing backing singer Brian a happy birthday, along with the crowd. New number ‘Purple Zone’ followed. The finale was ‘Memorabilia’ from 1982’s ‘Non Stop Ecstatic Dancing’ album. This was a great way to have one final dance and to dream of the Blitz Club days. At 10:24pm it sadly concluded and it was an all round excellent experience. 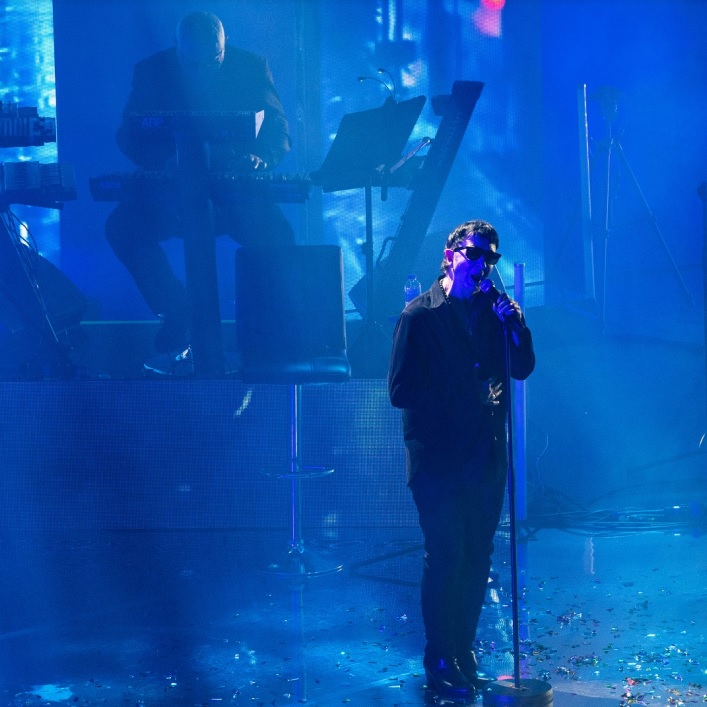 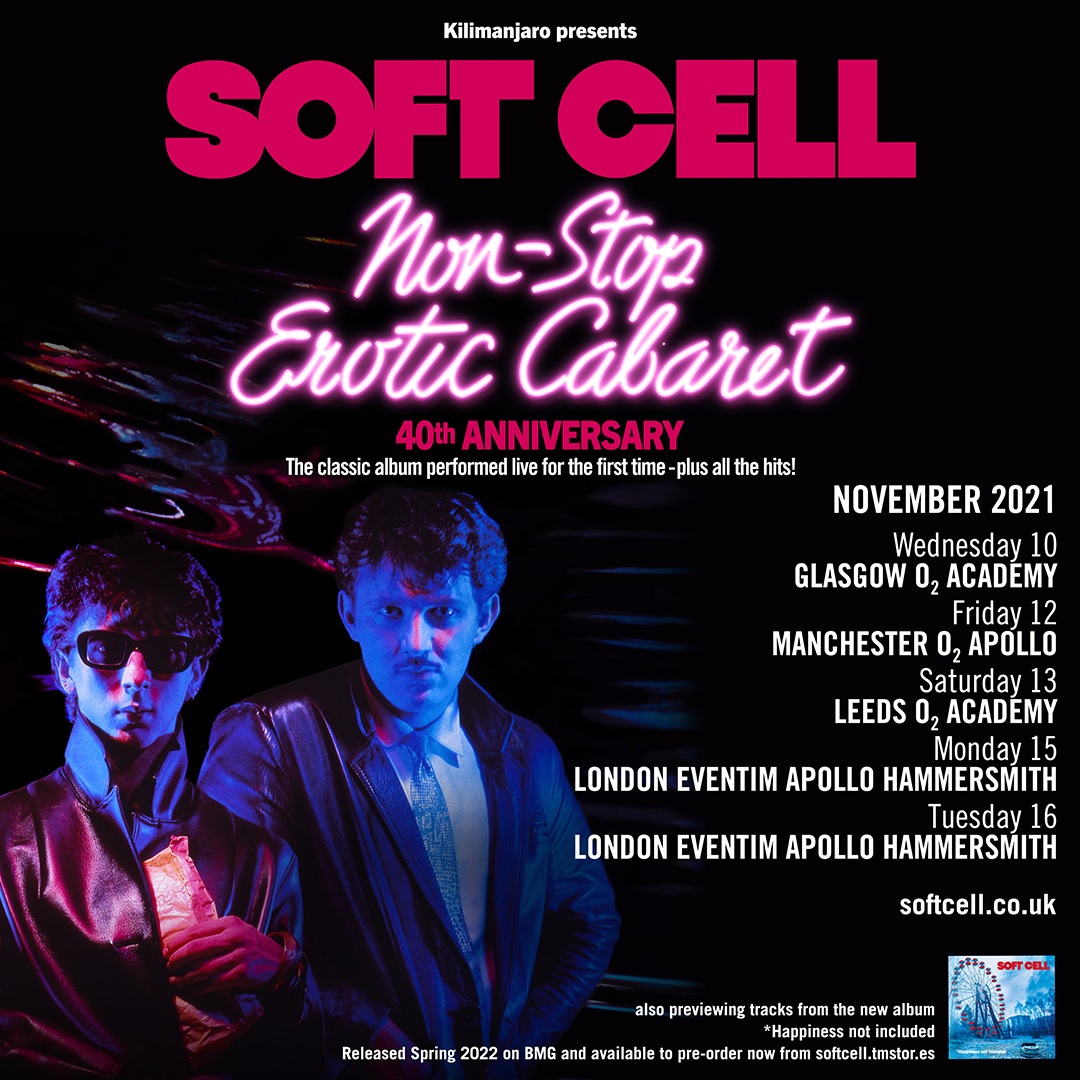 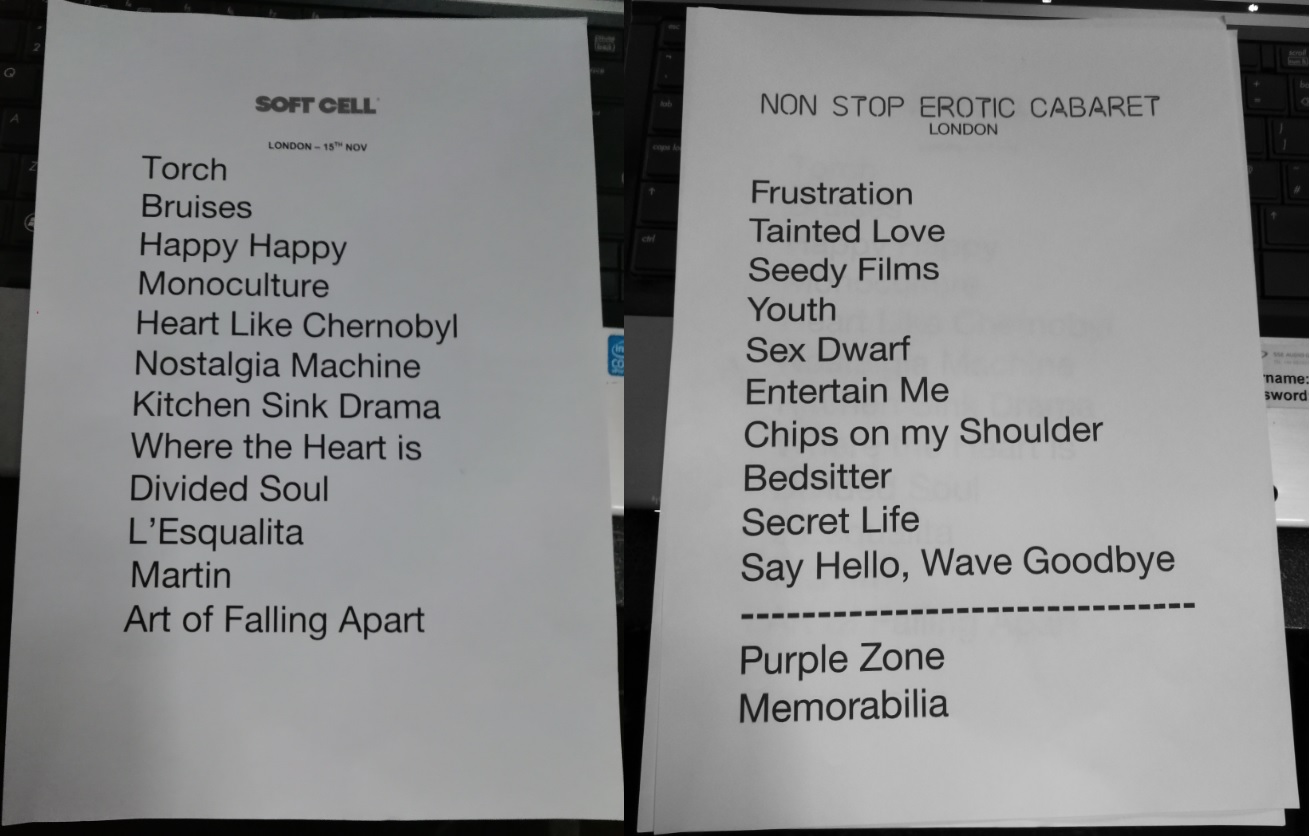