Life and death decisions in our caring humanitarian city

For the longest time I have considered Brighton an accurate microcosm of the UK, not least because it is a pioneering city from where trends, ideas and cultural influencers spread. In 2019 it was crowned the most “hipster” city in the UK, according to Google Trends.

Many and genuine are the challenges that individuals and families face daily in this city and they are evidently multiplying now due to the global impacts of “war and pestilence” that limit accessibility to basic needs such as food and fuel on an unprecedented scale, which neither central nor local governments are equipped to respond to.

It’s a worry, a real worry, particularly (and as usual) for the most vulnerable who, I would contend, have never really had the protection due them not only on humanitarian grounds but also on our post-modern grounds of so-called equality. Economic non-contributors but nevertheless as worthy as anyone: the elderly and the unborn.

It’s the latter that I address for now because, as ever, they remain the hidden victims with or without global instability. I say “victims” because I want to draw people’s averted attention to unarguably the most contentious and virulently disputed issue of all: abortion.

What a hated word that is: abortion. So hated that anyone who has anything to do with it uses the softer-sounding “termination of a pregnancy” – a term that comes straight from the new language that has been slowly developed over recent decades by those who seem to wilfully engage in emotional manipulation for their own ends.

“Product of conception” is the new term for “baby”, would you believe? These are the very same people who often drop the softer option towards those who disagree with them (most particularly on the abortion issue) and, sadly, launch their fiery darts of insult, curse and threat of violence.

So abortion is an issue that incites bellicose behaviour evidently because it is itself to do with life and death and not simply with human rights as proponents of abortion (or “choice” in new speak) would argue.

Ironically, I find these to be the same people who insist we should all “follow the science”, meaning that everything they do is “evidence-based” yet they are unwilling to discuss or debate respectfully this issue on that basis.

Whatever your personal position is on abortion – and it cannot be any kind of middle position, it’s not that kind of issue, you must be wholeheartedly and by conviction either for it or against it – I want to leave you with some facts about this city to consider.

The British Pregnancy Advisory Service (BPAS) clinic off Dyke Road charged between £480 and £1,510 for an abortion, with the vast majority of abortions actually paid for by us, the taxpayer. This clinic closed on Wednesday 30 June last year.

The next day a new Marie Stopes clinic (aka MSI Reproductive Choices) opened in the basement of the Stanford Medical Centre, in Preston Road, opposite Preston Park. They charge (the taxpayer) between £560 and £1,750 for an abortion.

Curiously this opening was never mentioned in the local press nor is there even now any kind of signage outside the building indicating this new facility. If this is such a noble service – after all, it is part of a wider healthcare facility – then why the apparent secrecy? 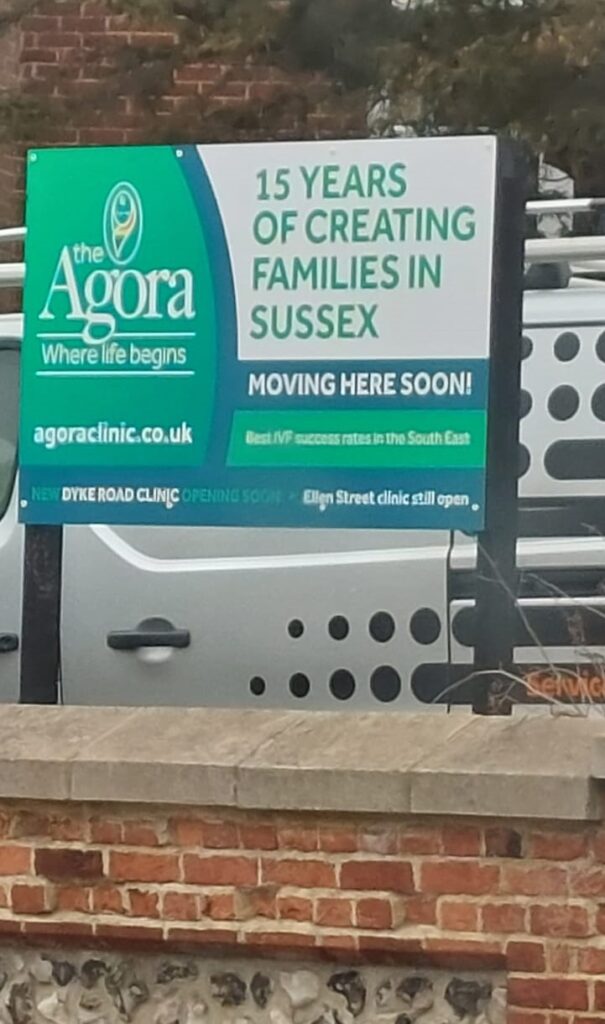 Irony of ironies, the site where BPAS once operated will be reopening sometime in the near future as the Agora Fertility Clinic. (Interestingly, and contrastingly, “agora” in ancient Greece was the name given to a public open space used for assemblies and markets.)

Their current location is in Hove and their stated goal is “to support everyone who wants help to have a family, regardless of their gender identity and sexual orientation.”

So, whether you’re a single male or “trans/non binary”, they will guide you through your “fertility journey” and, since they opened in 2007, they have reportedly facilitated the conception of 3,000 babies.

Do you see what is happening here? The city that is known the world over as a place of liberality, where people come to “find” themselves, to pursue a life of enjoyment with no holds barred and no boundaries, is a city that, for all its caring communities and its cultural ambitions, has all but rejected the once immutable traditional family unit that springs from the exclusive, intimate, lifelong relationship between a man and a woman. It is a science thing. For many too it is an ethical and a moral positioning.

This is Brighton. Creator and destroyer of life by all means possible under the respectable medical-sounding banner of “reproductive choice”. Apparently this is a glorious win for the individual whoever, or whatever, they identify as.

And the losers? Generational family inheritance and, most tragic of all, the baby in the womb. This is Brighton.

Christina Summers is an opinion writer specialising in governmental issues.