A junior doctor from Brighton has been named as one of Britain’s outstanding volunteers as part of a jubilee project. 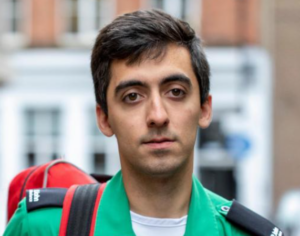 The Royal Voluntary Service organised the Platinum Champions Awards for volunteers to honour their patron, the Queen, and her 70 years of service.

Thousands of people aged from 16 to 101 from all over Britain – and supporting a range of causes – were nominated and from these nominations, 490 volunteers were hand-picked by a judging panel.

All the Platinum Champions were awarded a specially designed pin and a signed certificate from the Duchess of Cornwall.

And the 70 most outstanding volunteers were also invited to a special edition of the “Big Jubilee Lunch”, in London, on Sunday 5 June.

Luke Tester, who works in the A&E (Accident and Emergency) Department at the Royal Sussex County Hospital, in Brighton, and the Princess Royal Hospital, in Haywards Heath, was one of those 70.

And he was one of three whose volunteer story was shown on the BBC current affairs magazine programme, the One Show.

He has been volunteering since he was 16 years old and now dedicates himself to over 1,000 hours of unpaid work a year – on top of his long hospital shifts.

Dr Tester knew nothing about the award until the BBC turned up at the Amex Stadium in Brighton when he was volunteering for St John Ambulance.

He said: “It was a massive surprise to me. I couldn’t believe it when the One Show turned up. It was the last thing I was expecting but it is great to receive an award.”

Dr Tester, 27, added: “I first started volunteering when I was 14 when I was doing my Duke of Edinburgh Award.

“I mainly volunteer for a charity called Together Co, based in Brighton, and St John Ambulance. Together Co provides support for people who are suffering loneliness. I am a trustee for the charity and we had 500 volunteers helping over the last year.

“At the moment with St John, I am acting district clinical lead. So I’m responsible for all of our healthcare professionals and the clinical outputs in Sussex and as well as being an operational doctor myself going out to events providing medical cover.”

Over the past year or so Dr Tester has helped refugees from Afghanistan arriving in Britain from their war-torn country and also trained fellow volunteers in providing covid vaccinations.

Dr Tester said: “That’s part of the attraction: the different opportunities volunteering provides. I get responsibilities, development, leadership, opportunities to meet new people, to experience new things, to attend courses that I can’t get elsewhere.

“I’ve been really fortunate to do that over the last decade or so and now I’m in a position where I’ve developed a skill set and can help others within the charities.

“Volunteering makes me feel like I’m part of my community, that I’m giving back to the community. It’s incredibly satisfying to see a difference being made, to see things getting better.  It’s incredibly gratifying to know that so many people working together are part of that.”