Will Bloom need to spend millions on a striker when he already has a Florin?

As Albion players report back for pre-season training, the Chris O’Grady of his day, Florin Andone, also reported back to Lancing. 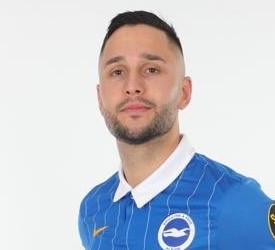 Andone was signed by former boss Chris Hughton in the summer of 2018 for a bargain £6 million from Deportivo La Coruna after his relegation clause was activated.

However, Andone has been almost constantly loaned out across Europe since September 2019.

The Romanian international was injured in his first few months with the Seagulls, not making his full debut until 1 December 2018 when he scored the winner away at Huddersfield.

He then had arguably his best moment in an Albion shirt when he ran half the length of the pitch to put 10-man Albion 2-1 up at home to Crystal Palace four days later.

Andone then scored another vital winner, this time at home to Huddersfield in March 2019. Before this, he also netted away at West Bromwich Albion in the FA Cup but was later retrospectively suspended for an off-the-ball incident, picked up by the cameras, before VAR.

After Hughton left, new boss Graham Potter paired Andone with new signing Neal Maupay and the two looked to have formed a superb partnership, as the Seagulls dismantled Watford on the opening day of the ill fated 2019-20 season.

However, it was a week later when things started to go wrong for the striker. A knee-high tackle on Southampton’s Yan Valery landed him with a straight red card and was described by Paul Merson as one of the worse tackles you’ll ever see.

That, apart from a brief substitute appearance in 2021, was Andone’s last competitive appearance for the Seagulls.

The thing about the Romanian is despite his occasional disciplinary lapses, he knows where the goal is!

Despite the resurgence in April and May, the Albion have had some serious goal droughts in recent seasons, and a striker like Andone is definitely one to have as extra ammunition on the bench.

He could certainly form a great partnership with Danny Welbeck and is also likely to work well with Denis Undav, and his robust style would be the perfect foil for both.

Although Graham Potter appears to have frozen the Romanian striker out for almost three years, now may be the time to give him another shot as it were.

Then those frustrating days when Albion dominate possession and create a host of chances but fail to score could become less frequent.