ME REX getting ready for Brighton concert 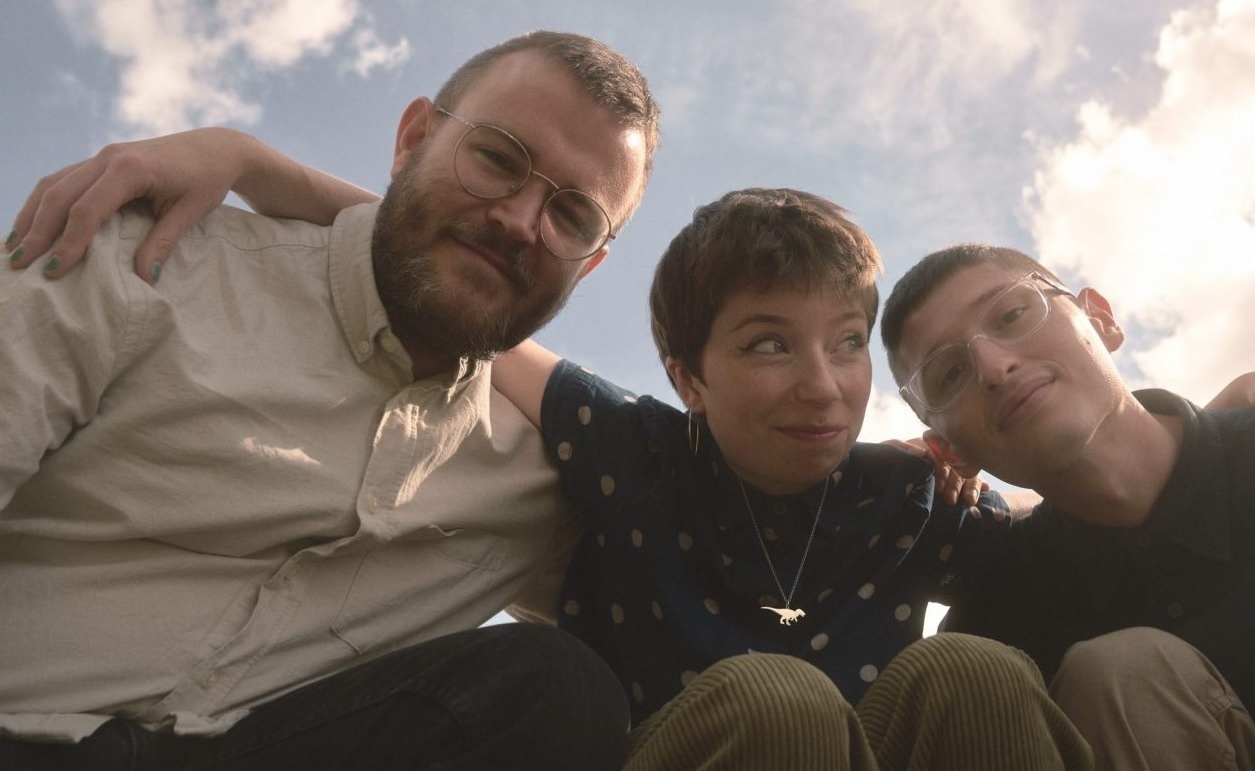 ME REX are heading back to Brighton

South London’s ME REX began life in the home of songwriter Myles McCabe, who was experimenting with his version of shouty, electronic bedroom pop. Armed with a slew of “surging gargantuan hooks” and themes of friendship, forgiveness, joy and dinosaurs, McCabe was quickly joined by long-time friends Kathryn Woods (guitar/vocals), Phoebe Cross (drums/vocals) and Rich Mandell (bass/keys/vocals).

ME REX have now graduated from producing songs at home to recording at Resident Studios in North London with Rich Mandell behind the mixing desk. After lockdown, ME REX spent the latter half of 2020 bashing down the doors to the indie world with the double EP ‘Triceratops/Stegosaurus’ which dropped on27th November of that year. The clear with black marble edition swiftly sold out, but you can still download/listen to it HERE. The 4 song ‘Pterodactyl’ release saw the light of day a year ago on 4th February 2022, and was followed by ‘Plesiosaur’ last June. The two releases were combined onto a 12” blue vinyl release – details HERE. 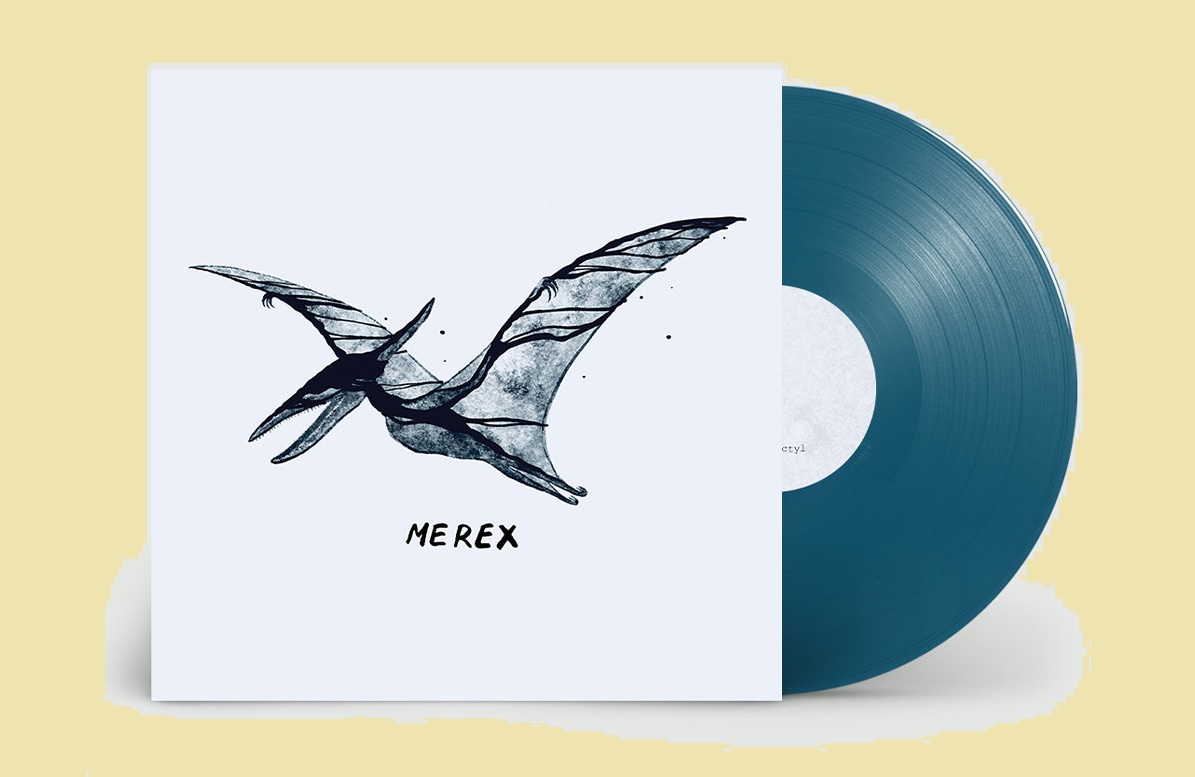 These releases must be a joy for dinosaur fans everywhere! Myles even titled his debut release ‘Wooly Mammoth’ back in November 2016. The ‘Megabear’ album dropped in 2021. 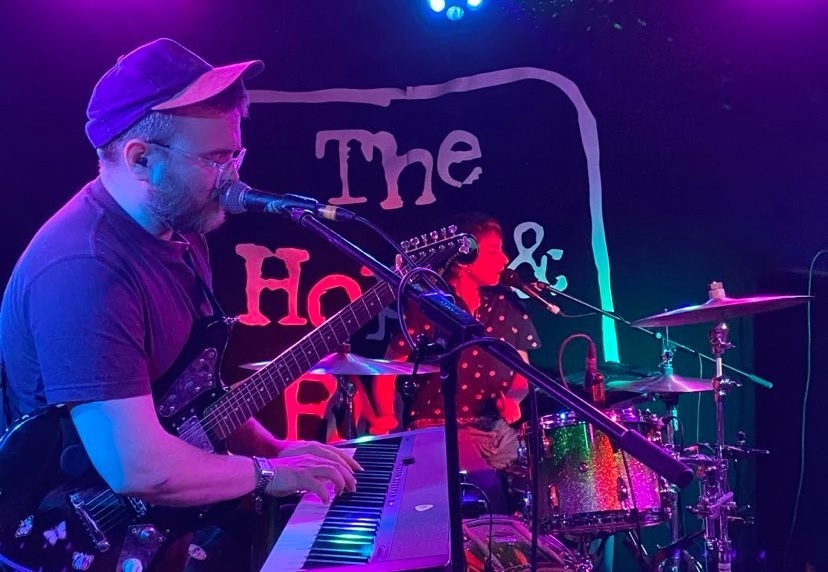 ME REX last appeared in Brighton as part of the ‘Mutations Festival’ last November. The Brighton & Hove News were in attendance and commented thus:

“There’s a relaxed vibe and cosy atmosphere upstairs in The Hope And Ruin, and I’m here to check out indie rockers Me Rex, who are from London and Brighton. They incorporate members of Fresh and Happy Accidents, and clearly have a fondness for dinosaurs and prehistoric mammals, naming their records after these long-extinct denizens of bygone eras. The band are no fossils though; they are lively and fun. I was expecting a four-piece, but there are three players tonight. Myles is on lead vocals, doing a pogo-style dance behind a keyboard, whilst wielding a Jaguar guitar. Bassist Rich is tall, thin, and bespectacled, the very epitome of geek-chic. Behind the kit, Phoebe has a beaming smile and seems to move her whole body whilst generating an infectious shuffle beat”.

“The music is jangly fun, and impressively performed. Opener ‘Stella Abattoir’ is a brisk indie romp, and I’m rather taken with the extracts they play from their album ‘Megabear’. This is a collection of 52 short snippets, all in the same key with a broadly similar beat of bouncing toms. The idea is they can be played in any order, to produce a continuous piece. I must go and put it on shuffle when I get home. I’m very taken with Myles’ rapid-fire vocal on ‘Sacred Cancer’. There’s a brief hiatus to resolve a technical issue, during which Phoebe mischievously calls out, “When Rich says ‘Mute’, you say ‘ations’.” He’s an unlikely and rather reluctant cheerleader, but gets a warm and enthusiastic response from the crowd, who clearly love this band”. 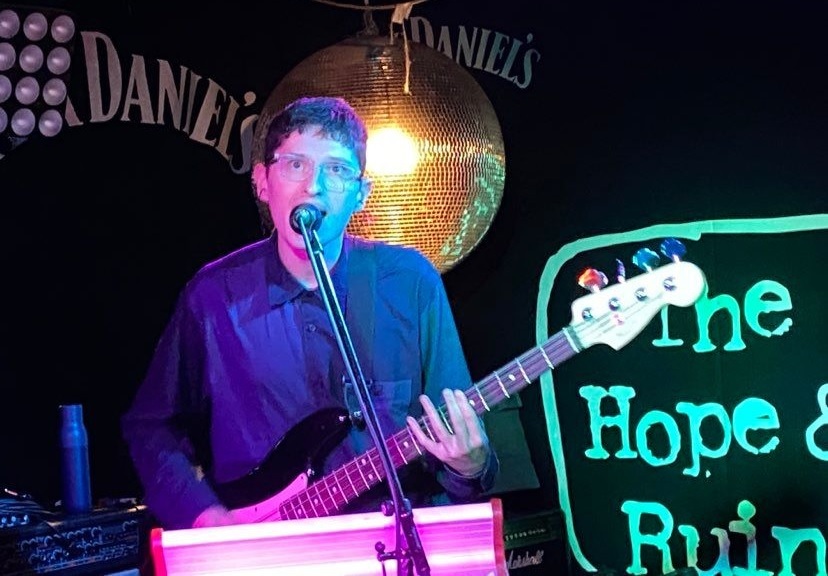 This current lineup of ME REX, which features Myles McCabe (vocals, guitar, keyboards), Rich Mandell (bass, keyboards, vocals) and Phoebe Cross (drums, vocals), are heading out on tour across the country next month, where they will be calling in at Oxford, Bristol, Nottingham, Glasgow, Leeds, Birmingham, Norwich, London, and Southampton, before concluding here in Brighton with a return to The Hope & Ruin on Sunday 12th February courtesy of Love Thy Neighbour. 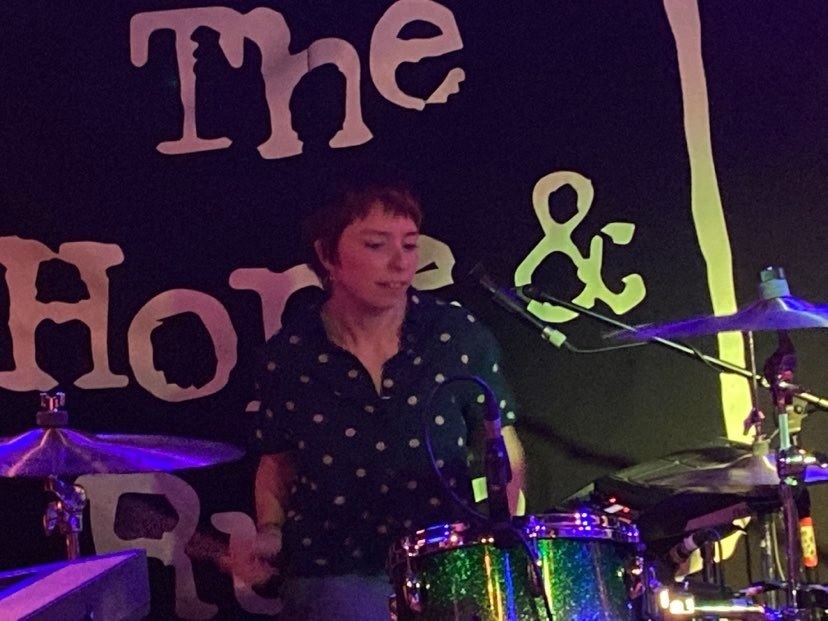 Tickets for the Brighton concert can be purchased HERE and HERE. Tickets for all other concert dates can be found HERE.

You can find ME REX merch HERE, plus Phoebe and Rich’s Happy Accidents releases can be located on their own Bandcamp page HERE.

More information on ME REX can be found on their ‘linktree’ HERE. 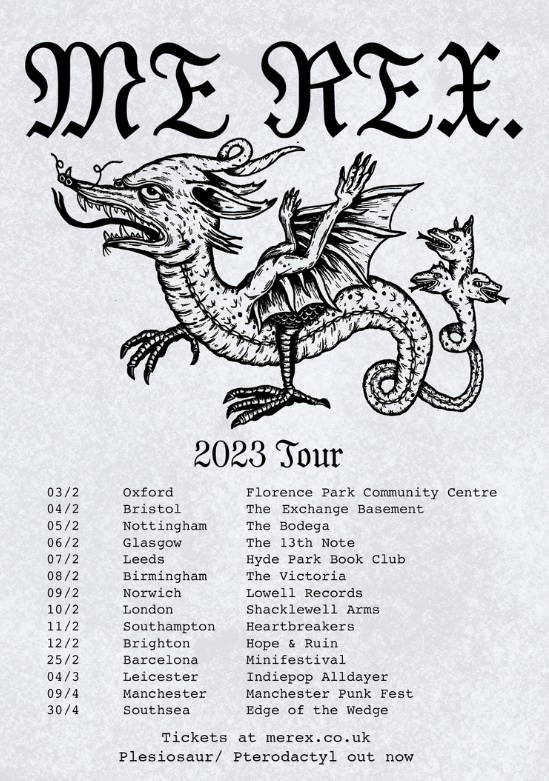