A Brighton mum has warned of the risk of hoverboards after her son’s board caught fire despite them following every precaution. 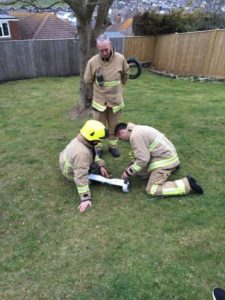 But eventually, Ryan got his wish after Sue and her husband found a reputable supplier, checked the board carefully and bought a fire extinguisher to use if the worst did happen.

And despite all their precautions, their fears were realised one day when the board did indeed start smoking while Ryan used it in his bedroom at his Saltdean home.

Sue said: “Our son really wanted one of the hoverboards that all his friends had. We were aware that there had been some fires involving hoverboards so we have a small fire extinguisher which was kept wherever the hoverboard was, and we taught my son how to use it just in case.

“We also told him not to charge it unless we were in the house. We bought it from a reputable internet company.

“My son was on the hoverboard upstairs in his bedroom when he shouted for help. My husband ran upstairs just as my son had pulled the pin on the extinguisher whilst smoke was coming out of the wheel of the hoverboard.

“My husband picked it up and threw it in the garden. It continued to smoke and we thought it may explode. We called 999 and the fire crews came out to deal with it.”

Aware that the incident could easily have been so much more serious if for example, this had happened at night when the family were asleep, sue is now warning people to be careful if they decide to buy one too.