The future of sporting fixtures at Brighton and Sussex universities is under review as an investigation is launched into “shocking and disgraceful” outbreaks of violence at the annual Varsity sports day yesterday. 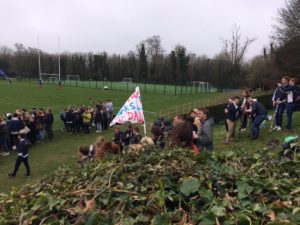 Bars were closed, police called and spectators taken to hospital during the event, in which teams from both universities compete in a range of sports.

The trouble started during the rugby match, during which flare and bottles were reportedly thrown and fans invaded the pitch, leading to the game being called off.

In a joint statement, Professors Adam Tickell (VC University of Sussex) and Debra Humphris (VC University of Brighton) said: “The scenes witnessed at the annual Varsity sports day were shocking and disgraceful.

“A full investigation has been launched into events and any students identified as having participated in the disorder will face serious consequences under our codes of discipline. We unreservedly condemn the behaviour.

“The future of fixtures will be under review as part of our wider investigation.”

A Sussex Police spokesman said: “Police were called to a report of a large fight that had broken out among spectators at a varsity rugby match at Falmer on Sunday (March 19).

“There were reports of bottles being thrown at the match between Sussex and Brighton universities and a number of people being injured.

“Police are examining CCTV of the incident and want to speak to anyone who was injured or who may have witnessed or have information about the incident. You can report online at https://sussex.police.uk/contact-us/response-to-appeal/ quoting serial 832 of 19/03 or call 101.”

A statement from the Sussex Students’ Union, which hosted the event, said: “Disruption at the Varsity sports matches led to the curtailment of the men’s rugby match and the temporary closure of students’ union outlets.

“The dangerous and disrespectful conduct of a small number of spectators endangered other spectators, staff and players and resulted in the men’s rugby fixture being curtailed following discussions with the referee.

“This level of disruption and violence was unprecedented at previous Varsity fixtures, with bottles thrown at the crowds and security staff as well as other dangerous behaviour. The behaviour included misogynistic, homophobic and racist language. We, along with the Vice-Chancellors of Sussex and Brighton condemn these actions.

“Prior to Varsity, the Students’ Union team had worked with campus security and the University’s sports service to plan the day including safety and security measures such as stewards, a thorough risk assessment and fencing. We also hired external security assistance for the first time for Varsity to reflect the increasing interest in the event.

“The decision to move Brighton spectators into an unfenced area was not made by anyone from the Students’ Union. We will be reviewing how this happened as it was not in our event protocols.

“A small number of spectators were injured as a result of this behaviour and they received first aid on site from trained staff with a smaller number being sent to hospital as a precautionary measure.

“It is a shame that this misconduct marred the great behaviour and sporting conduct of the majority of the spectators and all of the players on both sides.

“We’d like to congratulate all of the players from both Sussex and Brighton and hope that their efforts and achievements are not too tarnished by the actions of a few.

“We’d also like to thank the Sussex students who helped clear up the event area after the fixtures and those that provided assistance to staff and paramedics.

“Anyone with any information about what happened or who has been affected by today’s events should contact Adele, Activities Officer – activities@sussexstudent.com.”