A 26-year-old man was mugged in the centre of Brighton, Sussex Police said today (Wednesday 29 March).

The force published a CCTV image of the suspect and urged him – or anyone who recognises him – get in touch. 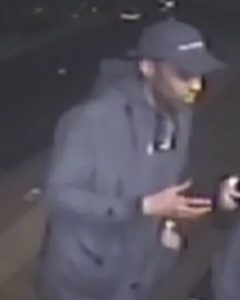 Sussex Police said: “Police have released a CCTV image of man they want to talk to in connection with a street robbery in Brighton.

“A man was walking along East Street between 4am and 5am on Sunday 12 March when he was approached by a man who started talking to him.

“They walked into an alleyway and the man suddenly punched the 26-year-old victim in the face and he fell over.

“He then stole his wallet containing cash and cards before running off northwards.

“The suspect is described as aged about 21, of mixed race, slim, 6ft 3in and was wearing a baseball cap.

“Anyone who witnessed the robbery or recognises the suspect is asked to contact police by emailing 101@sussex.pnn.police.uk quoting serial 306 of 12/03.”