Middle aged Brighton gets their ‘Teenage Kicks’ with The Undertones 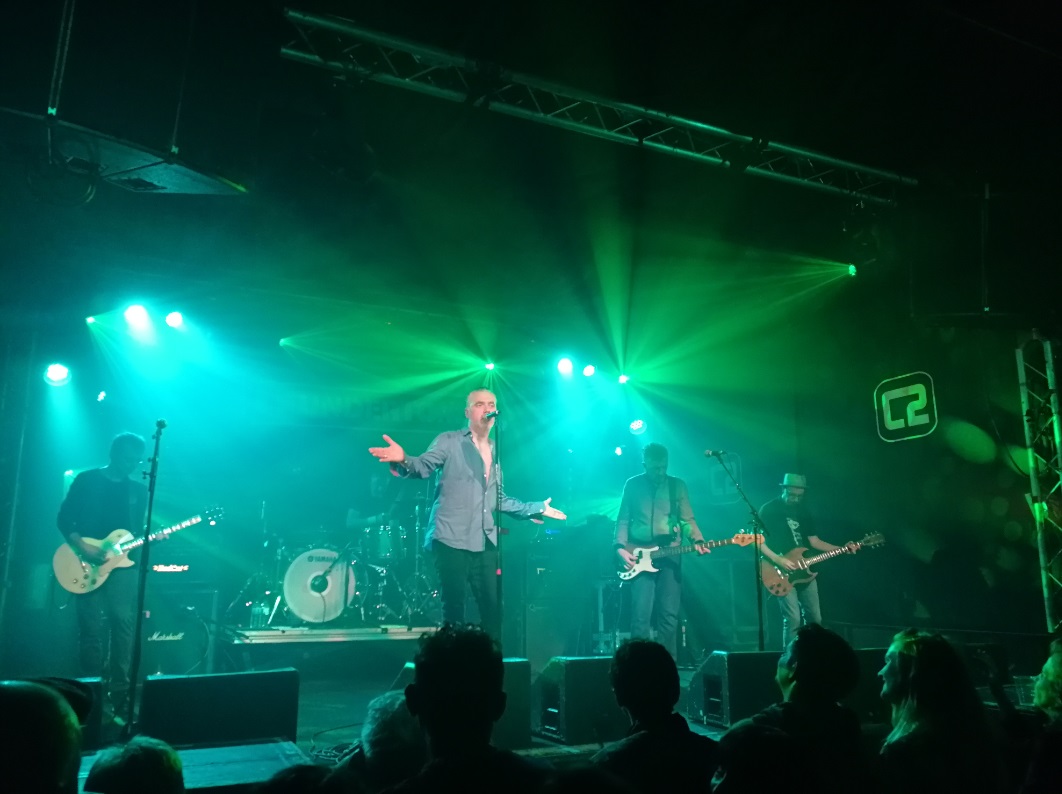 Tonight (16th November) Irish legends, The Undertones played an evening of lively musical entertainment at a sold out Concorde 2 in Brighton. Amazingly, I originally saw The Undertones perform at the Top Rank in Brighton over 35 years ago and tonight they were just as good – Feargal who? 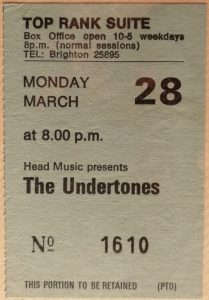 My Undertones ticket from 1982

Back in those days, Derry had no live bands worth watching, so the guys rectified this by learning to play by listening to mail order records. Inspiration had arrived in the form of one of the few copies of the NME that made it to Derry, but most of all, from listening to John Peel’s wonderful show on BBC Radio One. They practised in their bedrooms and eventually this led to the band recording their ‘Teenage Kicks’ anthem in 1978 on Terri Hooley’s Belfast ‘Good Vibrations’ label. The legendary DJ John Peel received a copy and liked it so much that he amazingly played it twice in a row on his radio show. Witness this moment in music history here: https://www.youtube.com/watch?v=ZPzyN8Qq5XA 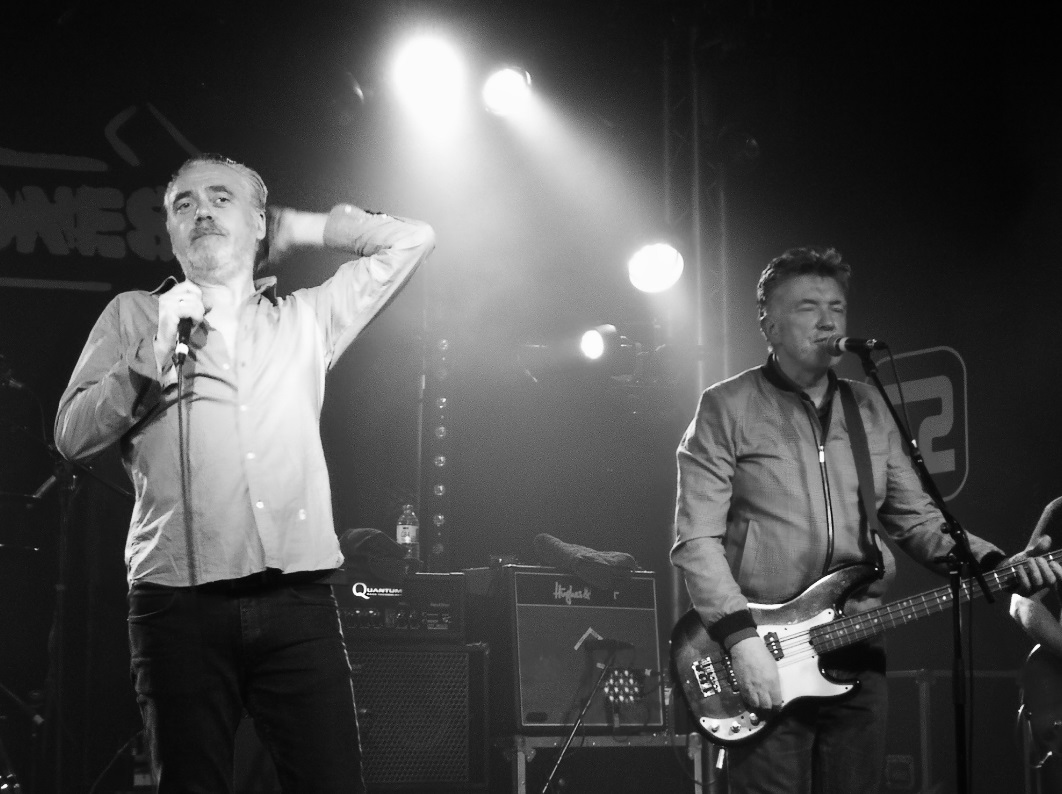 The John Peel listeners agreed with him and voted the song as No.10 in the years end Festive Fifty (of 1978). However, the song just wouldn’t go away and low-and-behold in the Festive Fifty of 1979, ‘Teenage Ticks’ had actually climbed to the second most voted tune by the avid Peel listeners on late night Radio One. If you are wondering, it was only beaten by ‘Anarchy In The UK’ by the Sex Pistols. You can’t keep a legendary track down and amazingly it also appeared in the 1980 Festive Fifty as No.7 and rose to No.6 in 1981.

Sire Records then snapped up The Undertones and ‘Teenage Kicks’ was re-released, resulting in the band’s first appearance on Top Of The Pops. Over the next five years, they released such gems as ‘Here Comes The Summer’, ‘Jimmy Jimmy’, ‘You’ve Got My Number (Why Don’t You Use It)’, ‘Wednesday Week’ and ‘My Perfect Cousin’. 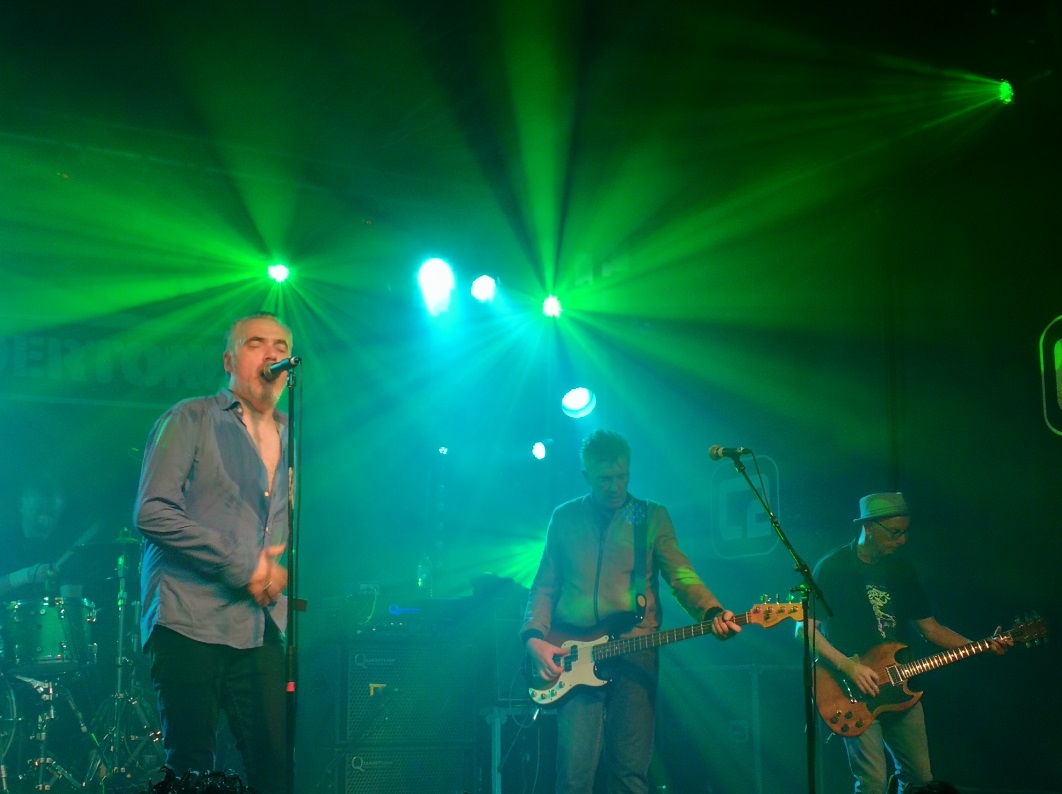 Then in 1983, singer Feargal Sharkey left the band to pursue a solo career and the remaining members decided to call it a day. The Undertones were to remain silent for the next sixteen years.

Luckily in 1999, The Undertones reconvened, without Feargal Sharkey, to once again perform their two-minute, three and a half chord songs to a new generation of fans in Derry. Fellow Derryman Paul McLoone replaced Sharkey on vocals and his vocal prowess and electric onstage presence soon convinced any doubters that he was more than capable of doing the job. McLoone is also a DJ for Today FM and broadcasts nationally in Ireland Monday to Thursday, 9pm to midnight. You can hear his recent shows here: https://www.todayfm.com/Paul-McLoone/listen-back 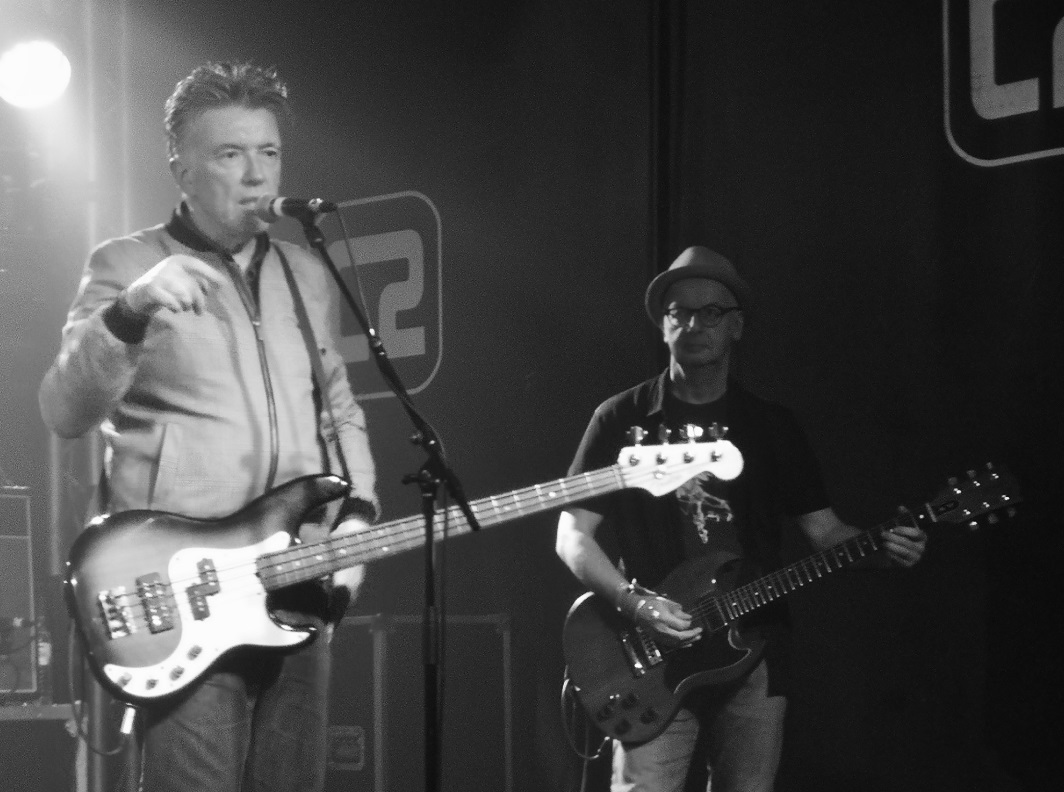 Twenty years after their last album, the new-look band released a new album of short, fast songs in 2003 called ‘Get What You Need’. This was critically acclaimed by Q magazine, Uncut, Rolling Stone and Hot Press. The single from the album entitled ‘Thrill Me’ found its way onto John Peel’s turntable. He introduced it on his show commenting, “And these are words I thought I would never be saying on radio again, a new single from The Undertones”. He liked it so much he played it twice, just as he did with ‘Teenage Kicks’ in 1978. They released another album in 2007 and this was called ‘Dig Yourself Deep’.

The band marked their 40th Anniversary in 2016 and they celebrated with a variety of scorching live performances at festivals and venues throughout the UK and Europe. The reviews were glowing with many critics and fans stating that the band are were playing as well as or better than ever before and tonight opposite Brighton seafront, I can concur with them. 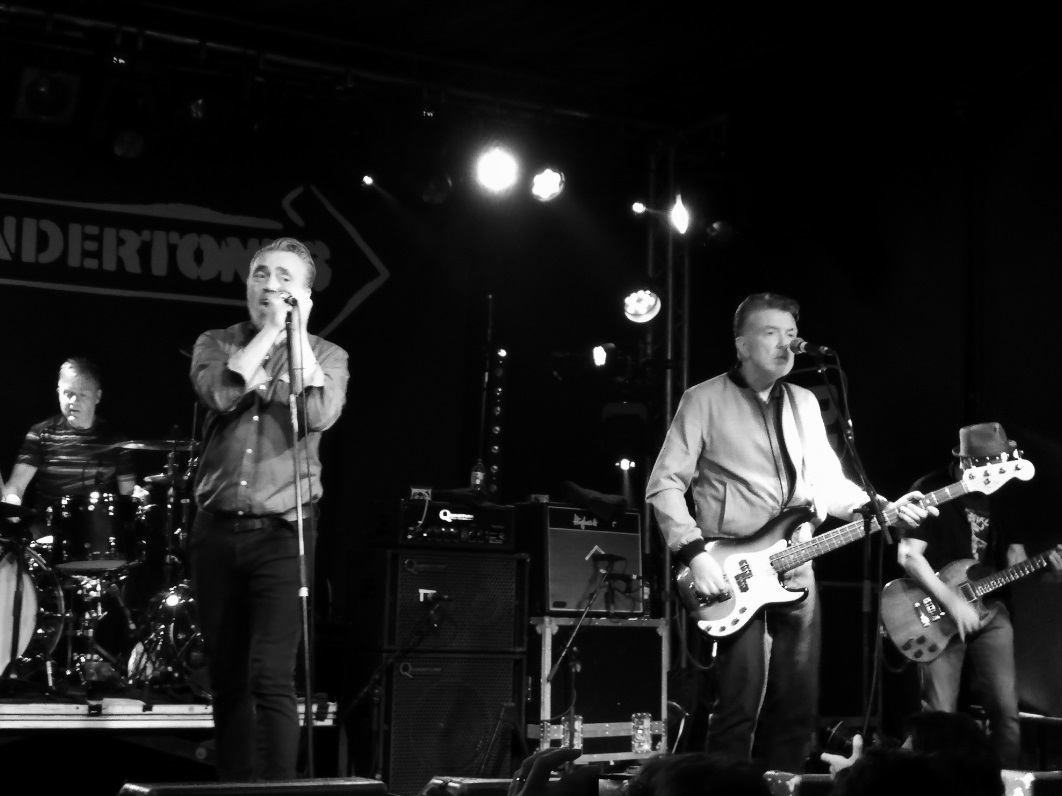 The support artist tonight was a chap called Vince James, but alas we missed his set – meetings in London and all that! But his website says: “An instantly noteworthy new voice on the scene, singer-songwriter Vince James brings simple, yet skilfully constructed songs, combined with whiskey-soaked vocals and insightful storytelling through his lyrics, which are packed with astute observations from growing up in a small town in his native South Wales”. Find out about him here: https://www.vincejames.co.uk/

The Undertones started their amazing 32 song set with 4 songs culled from their debut album, which included the catchy ‘Jimmy Jimmy’. Now that certainly got the crowd moving around in the mosh-pit at the front. In fact a dozen of the fourteen songs contained on debut ‘The Undertones’ album were given an outing tonight – happy days! 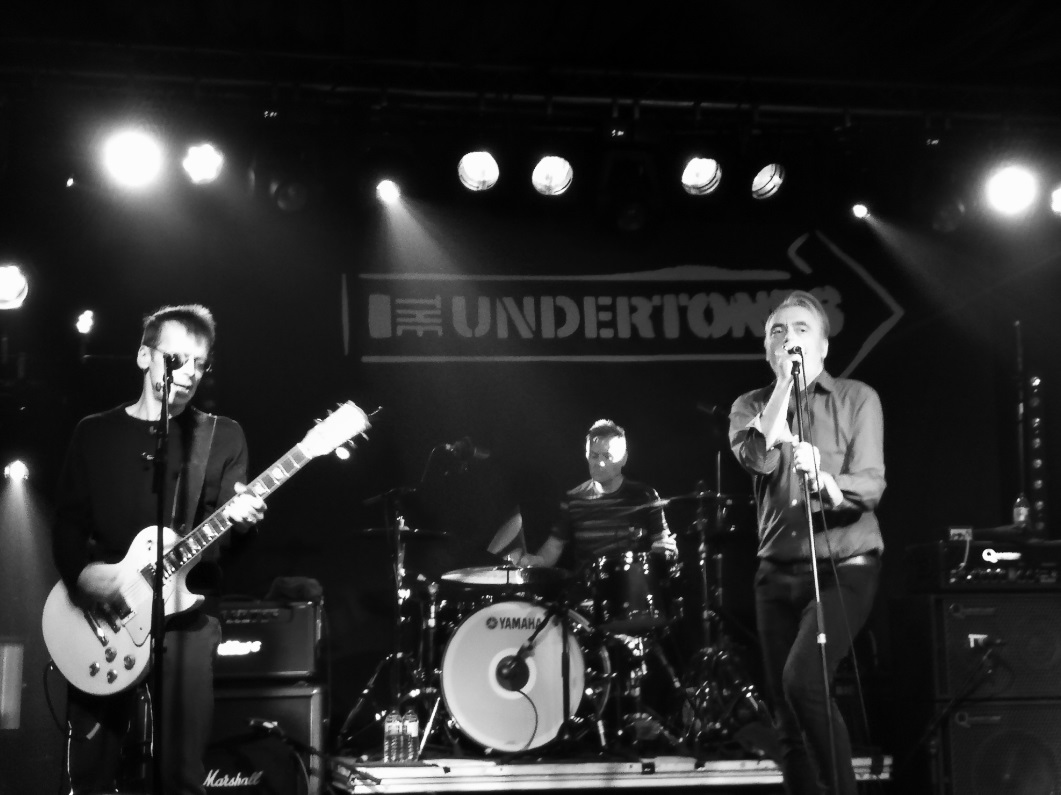 The Undertones songs are in the main an update of early Beatles type melodies but given a pop-punk treatment full of Irish charm! At the time they burst onto the scene, there was definitely an Irish pop-punk sound, with the likes of The Moondogs and Rudi to name just two. If this is your bag, then you can do no wrong than following your nose to virtually any releases on the Good Vibrations label. I know I did at the time and I am so grateful that I did, as they have all stood the test of time.

I was rather surprised tonight when the boys played ‘Teenage Kicks’ as their tenth song in the set, I would have thought that they would have placed it right at the end (TBC).

I must confess that I actually haven’t played my Undertones discs for quite a while (yes I know, shame on me – I will rectify it tomorrow), but here I was singing along to most of the tracks and hardly forgetting any of the words. This to me was the sign of great memorably catchy compositions. 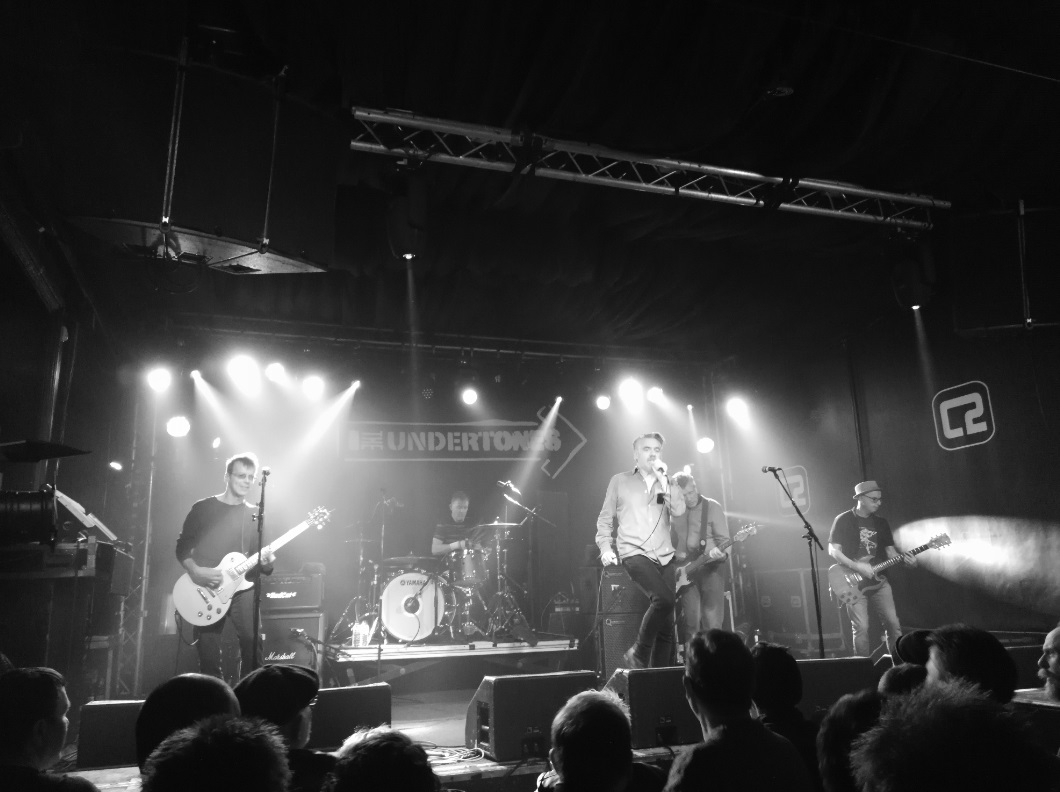 Tonight we were treated to virtually all of their singles, which was fantastic, there was ‘Get Over You’ (that went down really well indeed), ‘Here Comes The Summer’, ‘You Got My Number (Why Don’t You Use It?)’ the tamer ‘Wednesday Week’, ‘It’s Going To Happen!’, ‘Julie Ocean’ (which my mate really rated), ‘The Love Parade’ and joy of joys ‘My Perfect Cousin’ (which includes the legendary lyrics ‘His mother bought him a synthesizer, Got the Human League into advise her’).

The songs kept coming and the boys did something like a ten song encore (sorry I lost count). That’s a rarity and so is the fact they they finished with a song that they had already performed tonight, yes, ‘Teenage Kicks’. The atmosphere during the whole gig was quite boisterous but friendly!

Despite their long set, there were still a few treats that I could have done with, such as, ‘Smarter Than U’, ‘Emergency Cases’, ‘Mars Bars’ and ‘What’s With Terry’, but maybe they will perform these next time, as I would definitely go and see them play live again when they come down. Gillean Taing! 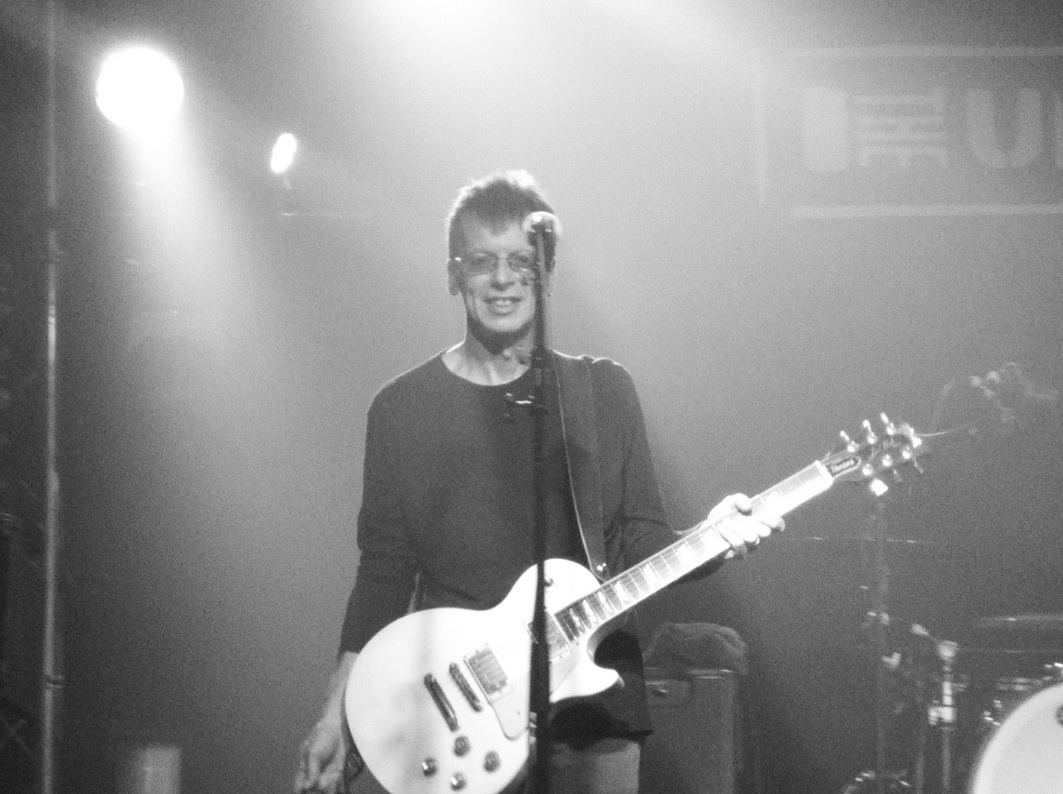 ‘Family Entertainment’ (found on the 1979 ‘The Undertones’ album)

‘True Confessions’ (found on the 1979 ‘The Undertones’ album)

‘When Saturday Comes’ (found on the 1981 ‘Positive Touch’ album)

To find out more about the band, visit: http://www.theundertones.com/_/Home.html 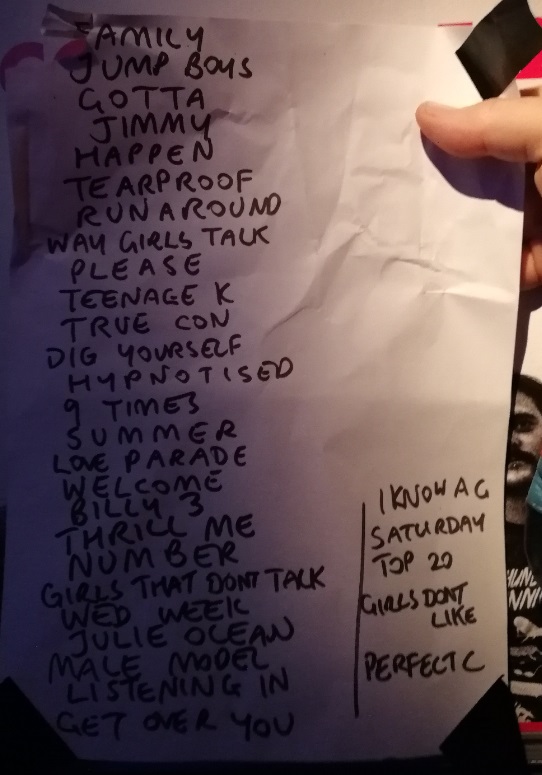