Revised plans for the former Astoria site in Brighton have been agreed by councillors. 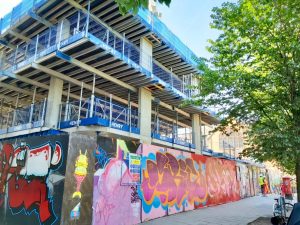 The planning application for the scheme known as the Rox – a joint venture between investment firm Cogress and developer Ktesius – was approved.

At a meeting at Hove Town Hall on Wednesday (10 July) the committee also granted permission for louvred windows instead of obscured glass at the front of the new building.

Work is well under way on the new build after the derelict grade II listed Astoria building – a former cinema and bingo hall – was demolished after standing empty for more than 20 years.

The seven-storey building under construction will provide 70 homes in Gloucester Place, in the heart of Brighton.