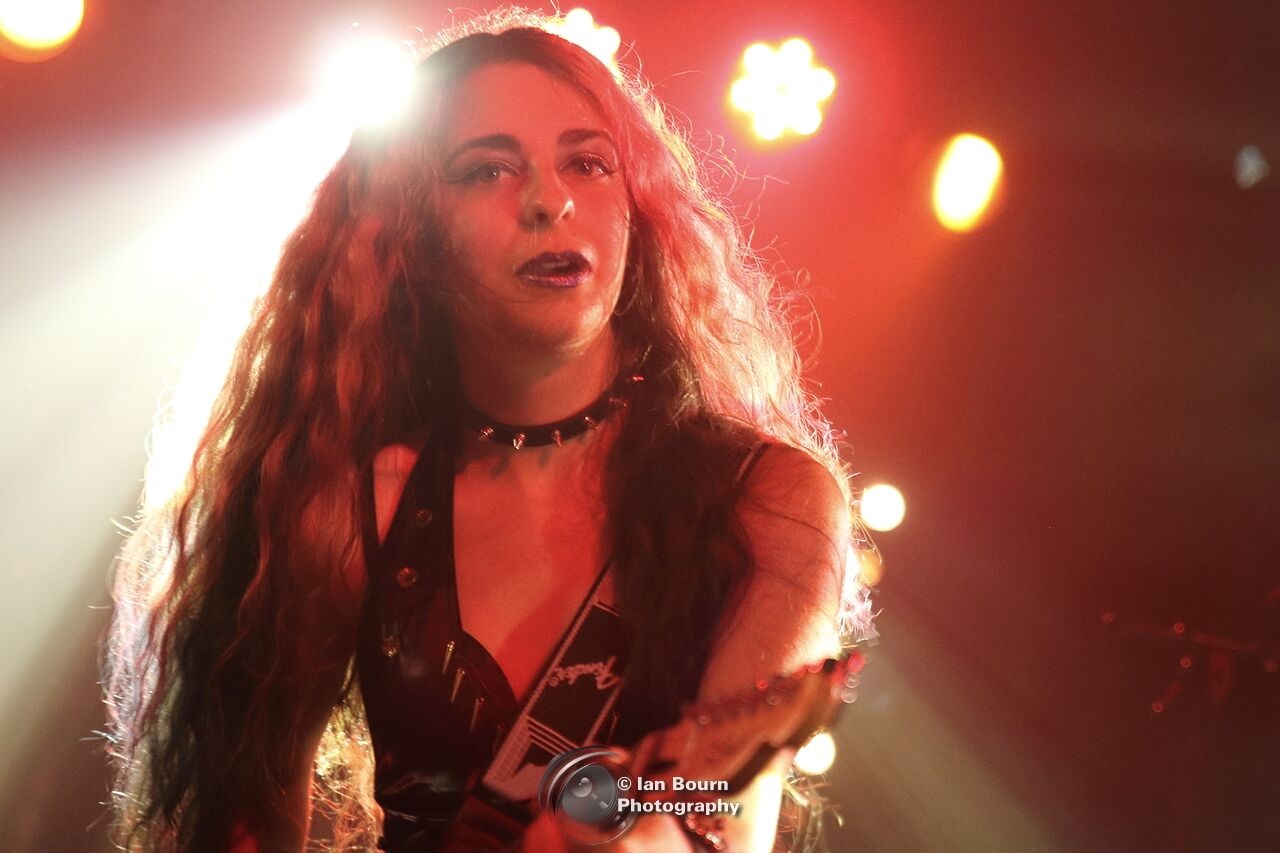 I must admit it that The Sex P*ssed Dolls are certainly the ultimate festivals band, having appeared hot off the heels from performing on the same bill as The Stranglers, Echo & The Bunnymen, Peter Hook & The Light, Embrace, Cast, Black Grape, The Alarm, Big Country & The Farm at Kubix Festival.

They were back in Brighton tonight on familiar ground as they were at the Concorde 2, where they were plying their lipstick, leather, latex, ripped fishnets and long haired show accompanied with a bucket load of great songs all washed down with a healthy slice of attitude! 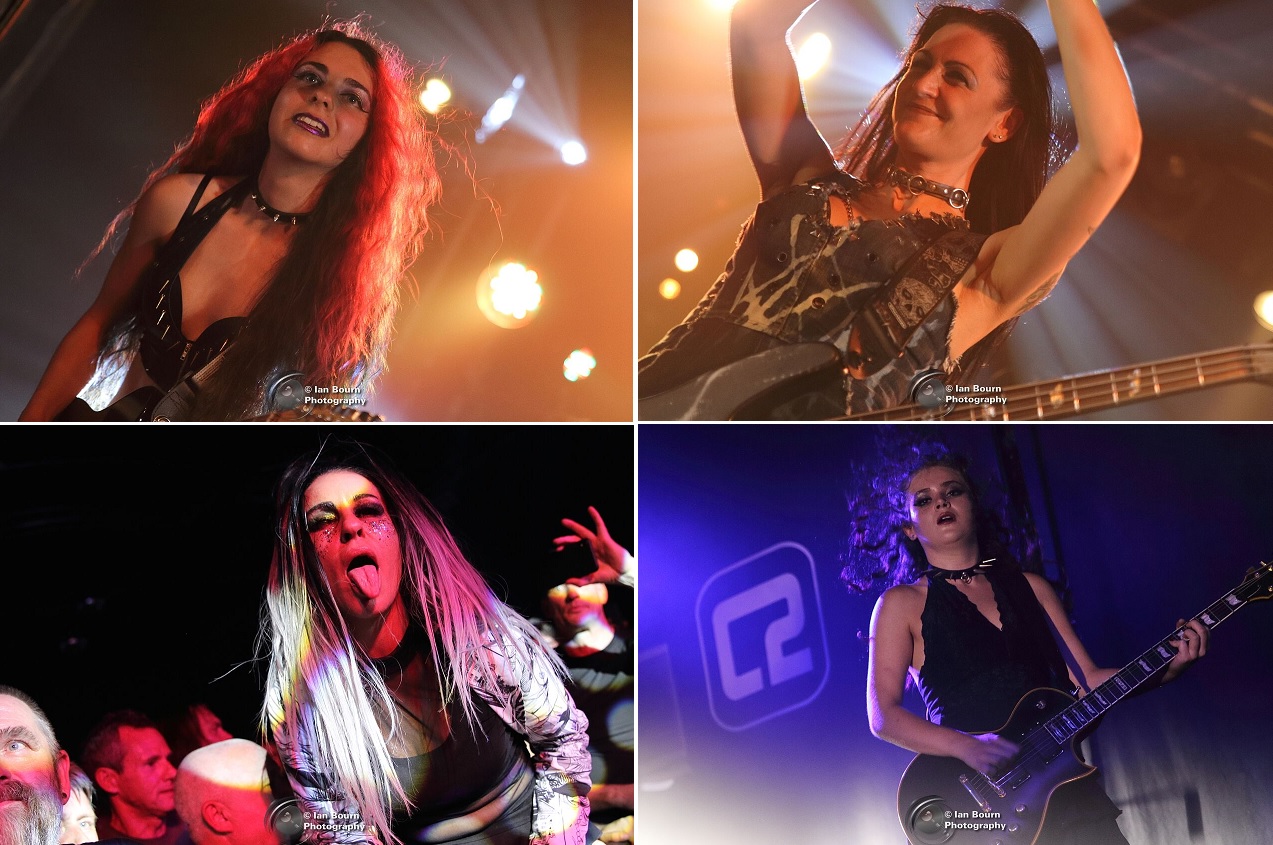 The talented musicians are led by the charismatic Nancy Doll, who in another world is a professional Amy Winehouse tribute artist, and indeed The Sex P*ssed Dolls themselves are a tribute act, but not solely a female version to Johnny Rotten’s lot, but their repertoire consists of covering iconic tunes by the likes of Foo Fighters, Talking Heads, Pulp, Nirvana and The Cult, as well as the more usual punk anthems.

Band members Nancy Doll, Connie Rotter, Jilly Idol, Anna Key and Kitty Vacant are no strangers to Brighton, as their previous two concerts here were at the Music Mania Festival held at Brighton RFC on Waterhall Road on 7th July last year and prior to that they were appearing at tonight’s venue on 6th April last year. Each time they perform their all action set it is a real occasion of outlandish punk pompas as indeed this evening is too as the venue is rather rammed. Rammed with eager punters out to have a great Saturday night’s entertainment.

They exploded onto the scene five years ago and have been wowing audiences and festival goers with their edgy performances of classic rock and punk anthems ever since. They even add a smattering of their own original material in there too, just for good measure. 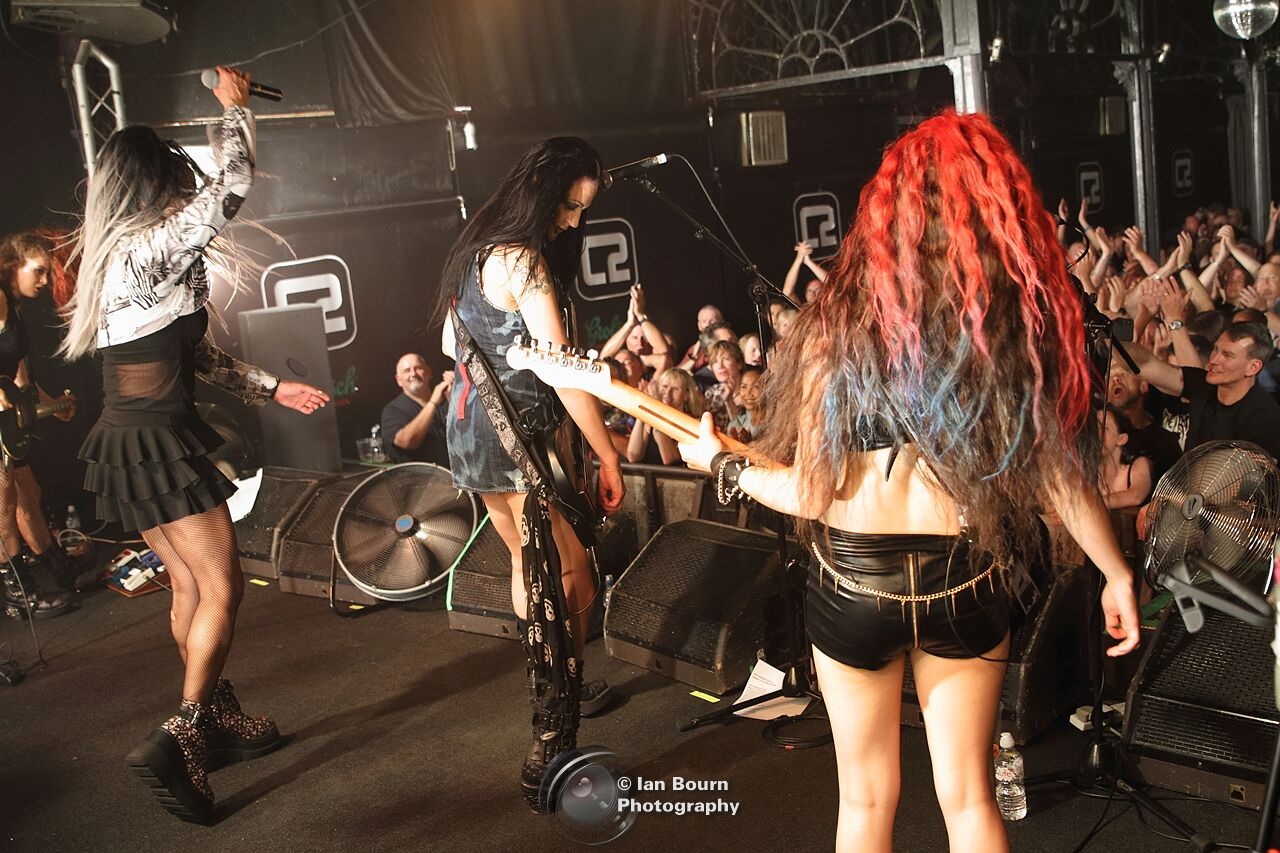 If feels like only a matter of time until they crash through the mainstream barriers in order to become even more successful. I feel they will certainly be able to break the Asia market by becoming massive in Korea and Japan, due to their looks and sounds and are arguably one of the most entertaining live acts to emerge from these shores in the last twenty years.

The lucky Concorde 2 faithful were treated to no less than 22 tunes this evening, with some of them even being recorded by the band for your pleasure. So without further ado, why not immerse yourself into the SPD’s world and enjoy the following five recordings and for those that had the pleasure of being there, you can relive some of the magic. Click on the blue words below to bring up the recordings of your choice:
‘Hurry Up Harry’ (Sham 69 cover) and ‘Ever Fallen in Love (With Someone You Shouldn’t’ve)’ (Buzzcocks cover)
‘Creep’ (Radiohead cover)
‘Alternative Ulster’ (Stiff Little Fingers cover)
‘Times Like These’ (Foo Fighters cover)
‘She Sells Sanctuary’ (The Cult cover)

The band mix up their sets each time they play in order to make things fresh and exciting and so tonight, sadly we did not get treated to ‘Anarchy In The U.K’ (Sex Pistols cover) or indeed ‘I Fought The Law’ (The Crickets cover made famous by The Clash), but we were awarded ‘Hurry Up Harry’ (Sham 69 cover) and ‘Creep’ (Radiohead cover), which more than made up for things. I can recall that during their previous set at tonight’s venue, we were then treated to ‘White Riot’ by The Clash and ‘Message In A Bottle’ by The Police. Therefore, given the time, they could easily perform a two hour set of these gems, which would be a real treat, but I guess a curfew is a curfew and wouldn’t really leave time for support artists either. 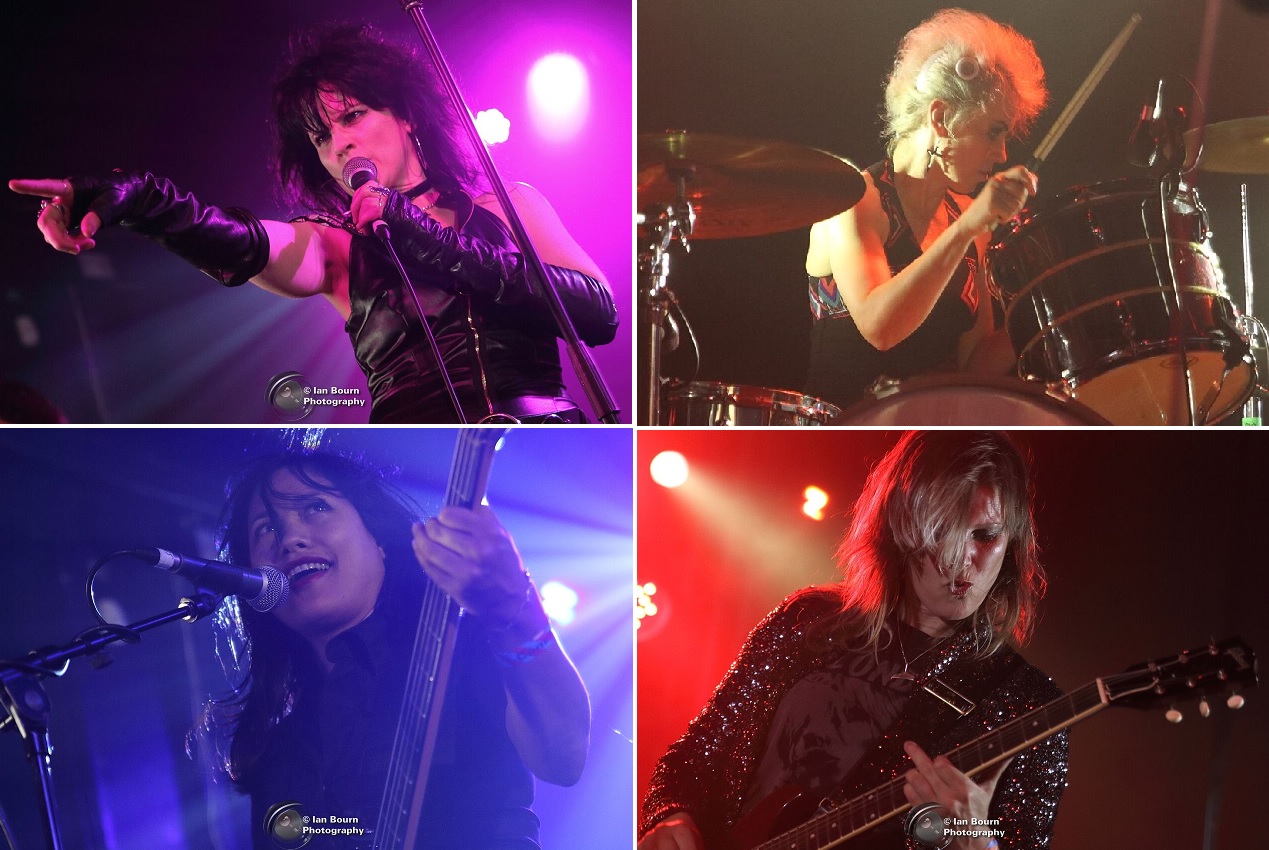 The Priscillas live at the Concorde 2, Brighton (pics by Ian Bourn Photography)

This evenings support artists being The Priscillas, who admirably entertained us with a great nine song set. The London based quartet is made up of Jenny Drag (lead vocals), Valkyrie (guitar and backing vocals), Taylor (bass and backing vocals) and one of Adam Ant’s drummers, namely Jola. Kerrang have correctly stated that they “They’re The Cramps, The Shangri-La’s and the New York Dolls all rolled into one”.

I’m sure looking forward to the return of the SPD’s. It was great mingling with them after the show and even managing to get a decent selfie with them. 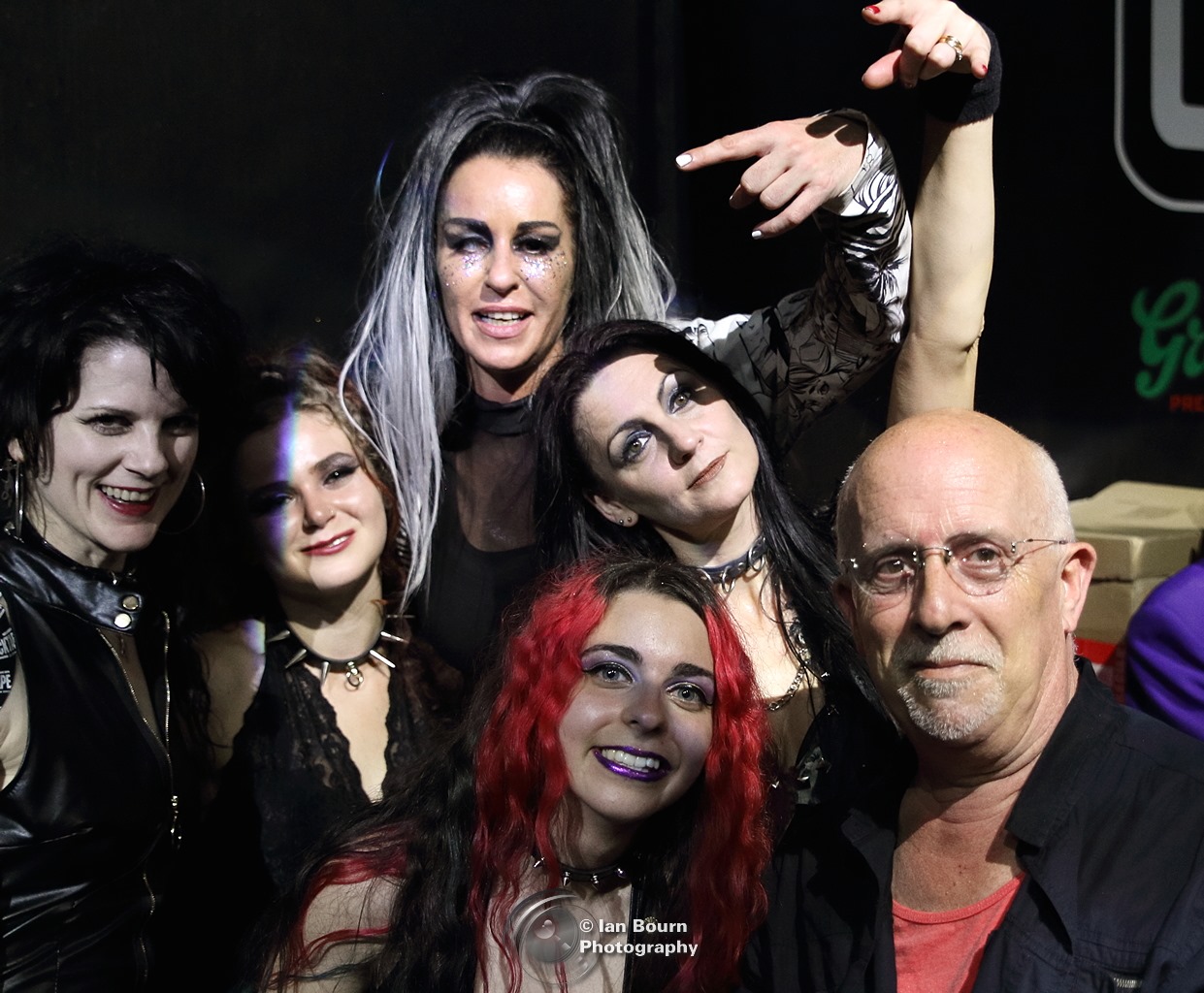 It’s clearly the case that the artists enjoyed themselves too as after the show, the band posted their approval on social media by reporting: “AMAZING BRIGHTON. we Love you.. Thank you”.

Want to find out more about The Sex P*ssed Dolls, then click HERE. 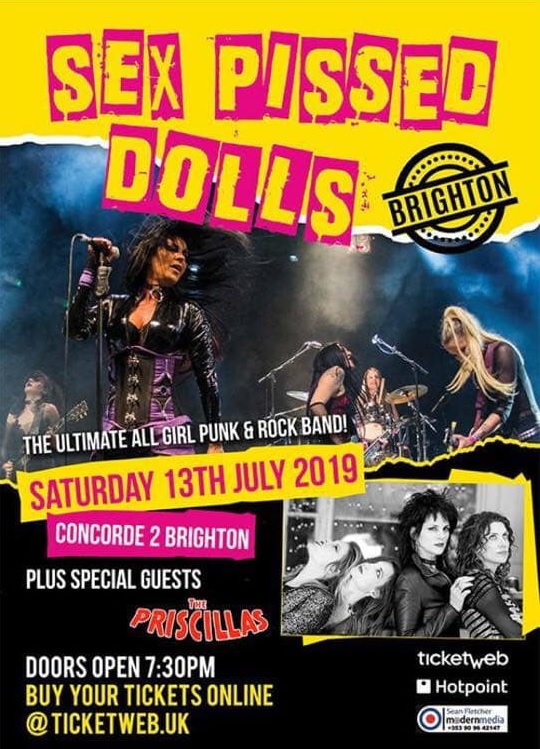