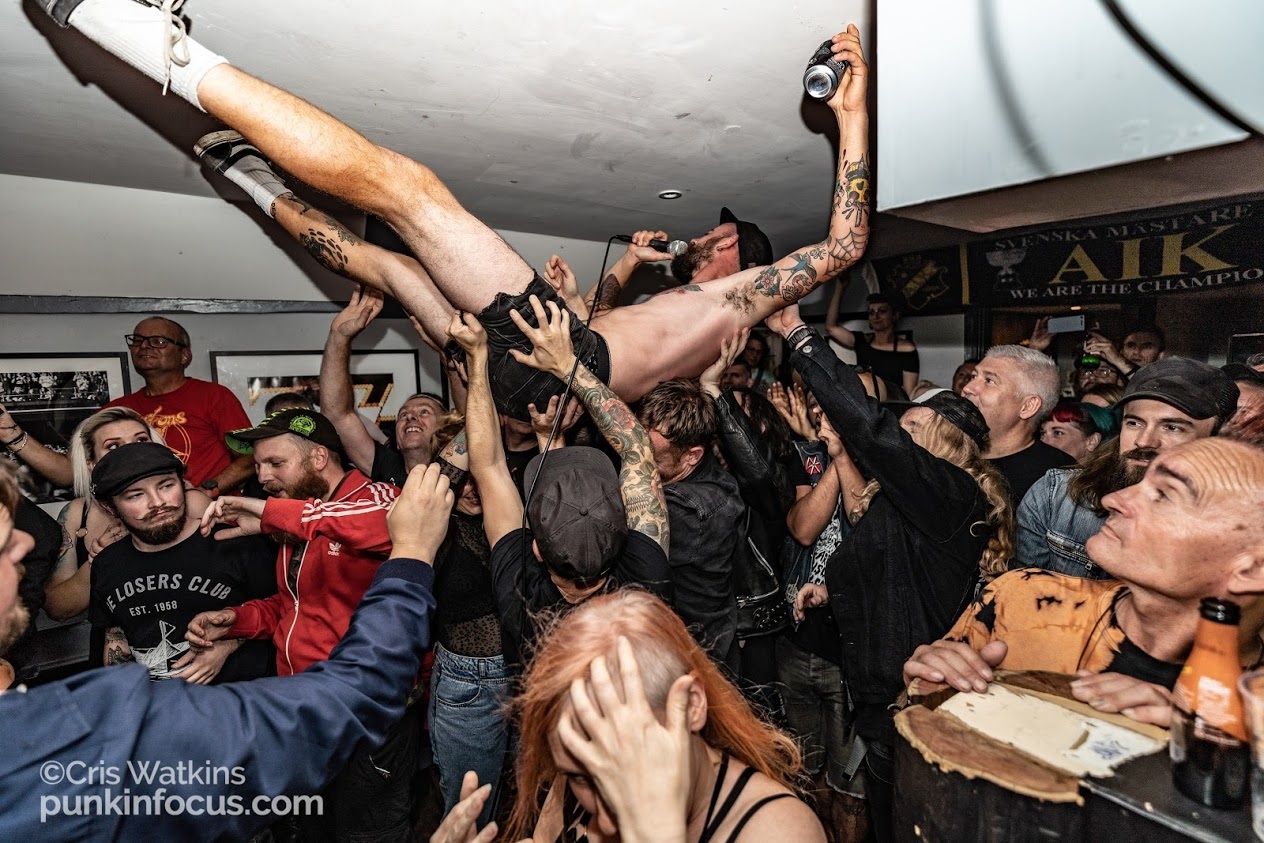 Having fun at The Pipeline in Brighton 17.08.19 (pics Cris Watkins Photography/PunkInFocus)

The Pipeline at 6 Little East Street is a hidden gem in Brighton. Many people aren’t aware of it even being there, but if you head on down the steps from the Town Hall and Jury’s Inn towards East Street, chances are you will be greeted by a cottage style building sign with a “P” on it – that’s The Pipeline. Thomas from Sweden runs the joint, which is building up a fine reputation for its vegan food options and quality beer and most of all lavishing in bringing quality punk bands to his establishment.

To serve as an indication of what to expect, the 100% vegan menu offers up delights named after formidable women in rock. You can order Patti Smith, Joan Jett, Suzi Quatro, Chrissie Hynde, Debbie Harry, Brodie Dalle, Kathleen Hanna, Courtney Love, Nina Hagen, Wendy O’Williams, Stevie Nicks and Janis Joplin. So with a lineup like that, you can see the philosophy that Thomas is instilling into this ever-popular business.

Having raised the flag for the girls, I then noted that all 4 of this evening’s bands were solely made up of guys! I don’t come across that very often these days in Brighton.

This evening was always going to be a boisterous affair, as it was a local band Rotten Foxes final appearance at the venue, having performed there many times over the past two years. They are a most energetic bunch, but singer Rhys aka Rusty Nails has decided to go off travelling whilst he is able to. He recently turned 27 and so the urge to see the rest of the world before he turns 30, was too great a pull for him. The band have just 2 more concerts to go, when they will be bowing out at The Prince Albert on Saturday 21st September – details HERE.

On the bill are tonight are The Hip Priests, Rotten Foxes, Flash House and Glitter P*ss. 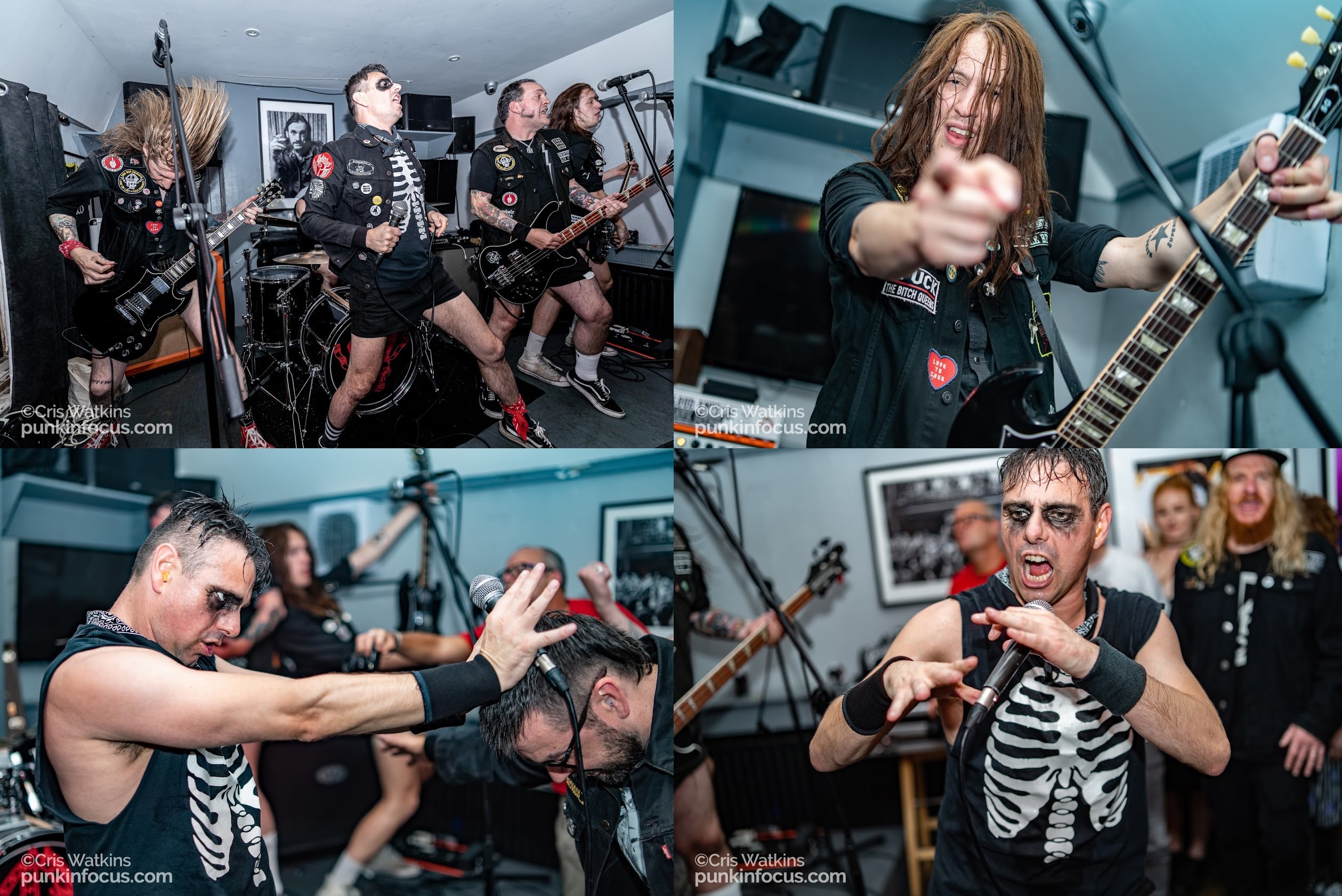 Although it was Rotten Foxes final gig at The Pipeline, it was deemed right and proper that The Hip Priests would be the headliners as since their inception in 2007, they have released a mighty twenty four 7” singles, four albums and three EP’s by various independent labels from all over Europe & the USA!!

They claim to be “The most prolific band you’ve probably never heard of………” and with that many releases under their belt, who can argue with them?

They clearly were enjoying themselves as Nathan informed the punters that they normally don’t do encores (and there were none listed on their setlist), but tonight they would make an exception and called upon Rotten Foxes to assist them in the mayhem – the boys dutifully obliged. It was a fine way of rounding off a night of heavy, loud, punk/metal/garage. The Hip Priests even got in the ‘Rotten Foxes mood’ as they all sported shorts for the first time in homage to the band. Not sure if they will do that again as it was announced that the guitars kept sticking to their legs as it was so hot in there!

Check The Hip Priests out on Bandcamp. 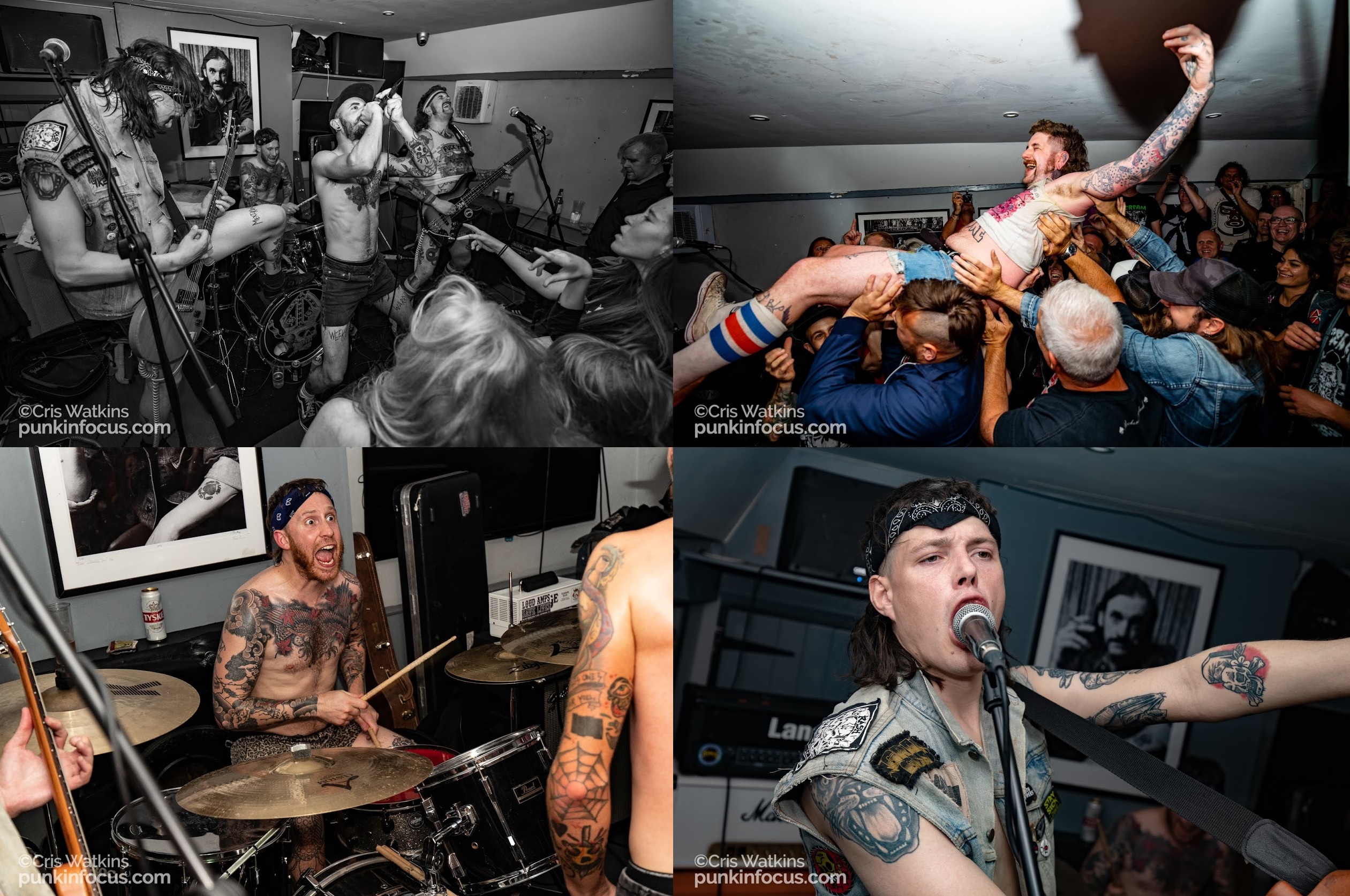 Prior to The Hip Priests set, it was Brighton’s Rotten Foxes who consist of Rhys aka Rusty Nails (vocals), MacDaddy (guitar), Jimi Dymond (bass), Danny Camelot (drums). This band is creating such a buzz at the moment and are certainly building up a loyal following. It seems a real shame just to throw it all in, but maybe they will reconvene when Rhys gets back from his extensive? Who knows?

This was my third encounter with the band and each time they certainly have delivered the goods. The energy oozes from every pore of their body, as they take us on an aural journey of hard fast metal/punk. The highlight being when Rhys was hoisted up by the fans and as it’s a low venue he was able to walk along the ceiling in his boots.

The Rotten Foxes look is akin to Aussie punks Amyl & The Sniffers, with shorts, cropped tops and mullets. Just a short time ago, I’m sure they would have gotten a little grief with this image, but it’s a more tolerant world now. So overall, yep, another fab set, but then I knew it would be. 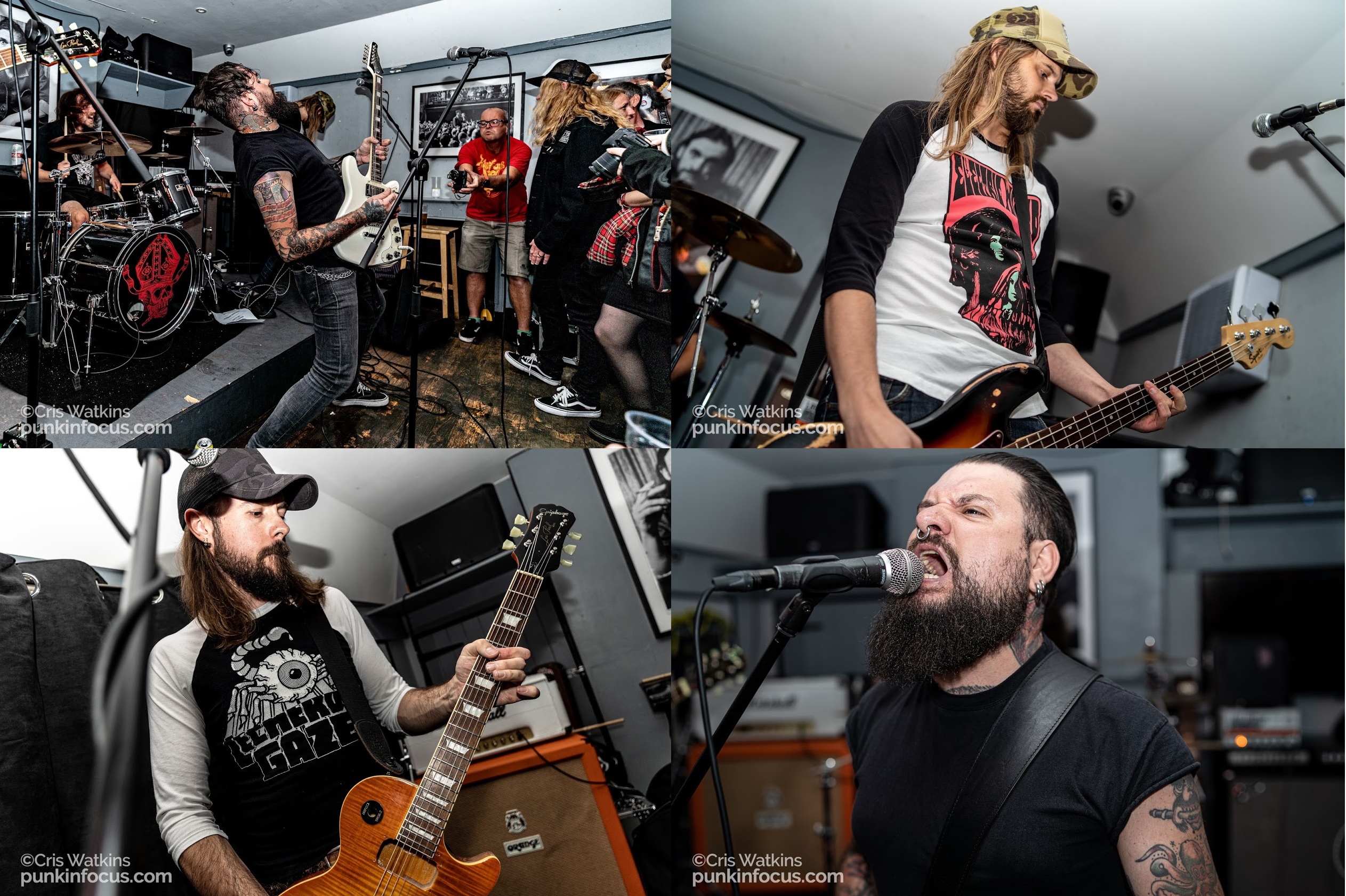 Second on the bill this evening were Flash House who I hadn’t yet come across and I was a tad unsure as it what to expect. Turns out they are a London based quartet consisting of Crusty (guitar/vocals), Mike (guitar), Matt (bass) and Harry (drums). Last year they unleashed a split 7” brown splatter vinyl single with headliners The Hip Priests. Flash House claim that they perform “fast songs played by slow minds”.

Indeed we were served loud, fast, heavy songs, somewhere in the ballpark of GBH and Motörhead. Behind them on the wall is a large photo of Lemmy (from Motörhead) and he was staring down at the guys with some knowing approval. It was just as though he was the fifth member of the band. You get a clash of looks and styles with this lot, is it metal, garage and/or punk? Whatever it is, it was surprisingly for me the best musical set on the night. I certainly never saw that one coming! If you were to rank the four bands on their crowd surfing abilities and crowd interaction, then Flash House would lose that race, but if you vote solely on the music, then they were certainly most my baaaaag maaaan! I would definitely love to see these guys play live again!

The busy night was kicked off by Glitter P*ss who are a Brighton based quintet made up of Jobi Jones (vocals), Grand Glitter (guitar/vocals), Tom Vom Glitter (bass) Vittu Glitter (drums) and ‘Rotten Foxes’ guitarist MacDaddy Glitter.

They state that they offer up Rock ‘n’ roll with a stench of p*ss. When we reviewed them last October we reported …“These Brighton based lads are in essence loud US pre-punk noise merchants who waiver on the outskirts of filthy metal and perform the best cover of The Damned’s ‘New Rose’ that I can recall having heard. It’s worth seeing them just for that!”

So last time around they were OK and worth seeing for just one cover tune, whereas tonight, they seemed much better indeed. I suspect that within the ten months from me first seeing them until now, that they have been practising quite a bit. Sadly no ‘New Rose’ by The Damned tonight though.

In summary, I’m glad I went, although I enjoyed some more than others. After the event, I spoke to another punter who shared the exact same thoughts as me on the night. It WAS Rotten Foxes night, but seriously watch out for Flash House. 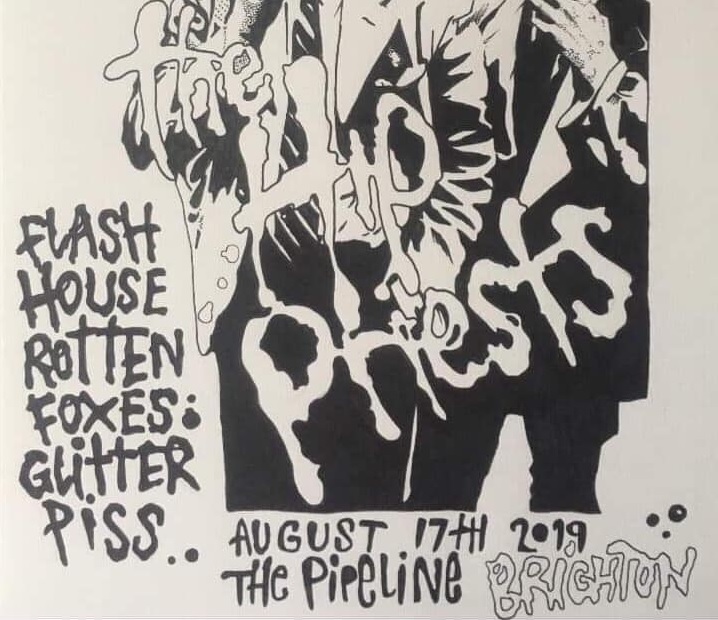 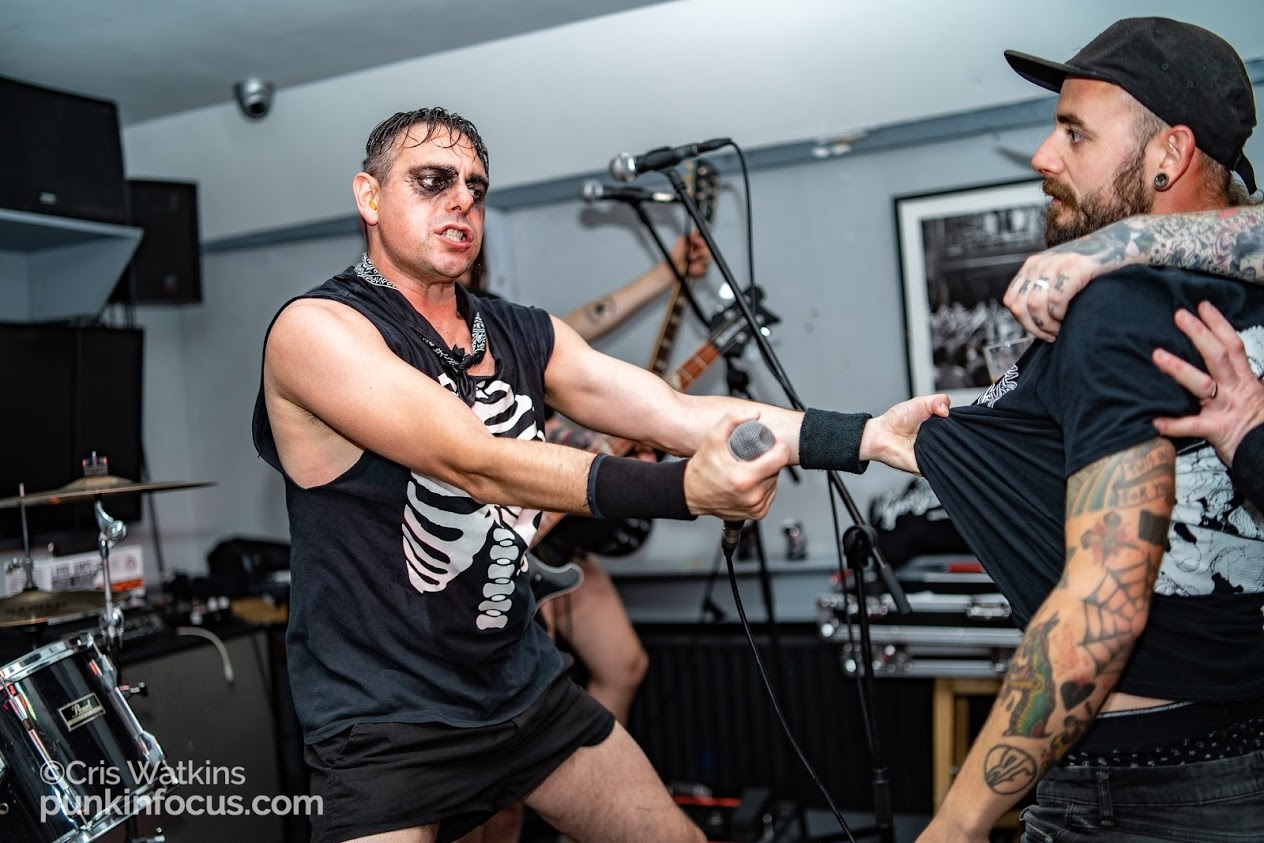 Nathan from The Hip Priests is ensuring that Rhys from Rotten Foxes doesn’t go off travelling! (pics Cris Watkins Photography/PunkInFocus)