A charity has submitted plans to build 30 “modular” or “prefab” flats for rent on an overspill storage site in Brighton.

YMCA DownsLink Group aims to offer the prefabricated flats at low rents to young people from the local area who are in work, training or work-based education.

The proposed flats would be put up on an “unkempt” and “blighted” site in Eastergate Road, Moulsecoomb, that was being used for storage and parking by housing contractor Mears.

A number of shipping containers were dotted around the site which used to be garages for council tenants living in the neighbouring Oakendene flats, in Moulsecoomb Way.

All but two of the garages were deemed surplus to requirements and demolished.

YMCA DLG said: “This proposal will provide 30 affordable units which will help keep some of the most vulnerable young people in the city from becoming homeless.

“It is proposed to erect 30 ‘transitional supported housing’ apartments in two blocks (and) create a central internal courtyard and access area.

“Communal accommodation will also be provided in the basement along with bin, bike store and laundry facilities for residents.”

Each of the two blocks would be four storeys high, with the western block also having a basement, and each of the small flats would have just one room plus a bathroom.

The scheme – on land owned by Brighton and Hove City Council – is part of a council housebuilding scheme known as New Homes for Neighbourhoods.

Councillors previously approved the idea of prefab flats on small and challenging sites before leasing the plot in Moulsecoomb to YMCA DLG – formerly Hove YMCA.

The deal was struck after the charity proposed putting up prefab flats – known as Y:Cube homes – along the lines of a similar scheme in London.

It has also secured funding of £546,000 from the Homes and Communities Agency – a government organisation now known as Homes England – towards the £1.6 million cost of the scheme. 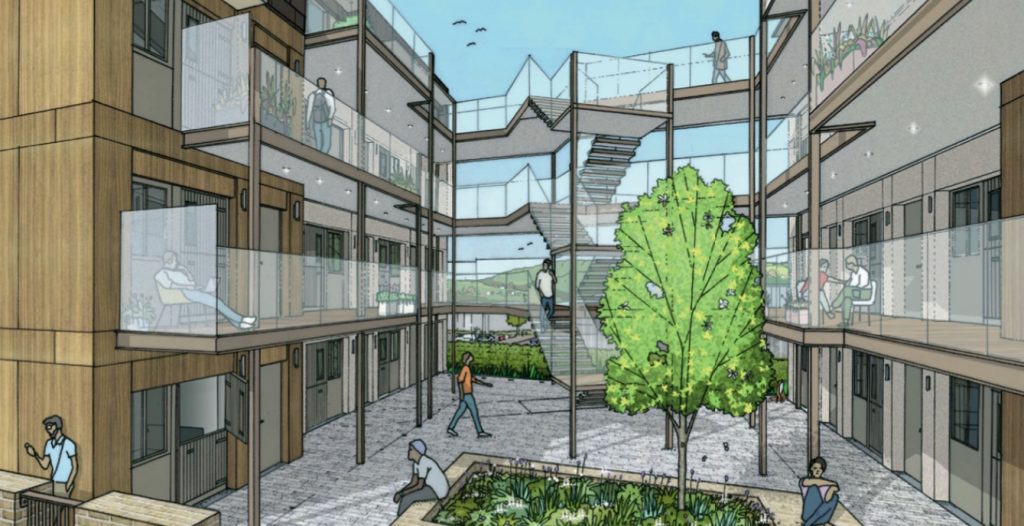 But principal planning officer Mick Anson wrote to YMCA DLG in June and said: “The principle of housing on the site is acceptable. However, the scale and massing of the scheme on this small tightly constrained site would appear to represent an overdevelopment of the site and would have an overbearing impact in the streetscene.

“The proposals are likely to have harmful amenity impacts for adjoining occupiers and proposed occupiers due to undersized accommodation, privacy issues and inadequate daylighting.”

The charity’s agent, Daniel Frisby, of law firm DMH Stallard, addressed the criticisms in a planning statement that forms part of the Eastergate Road planning application.

He said: “This summary is overly negative and fails to take into account the significant material benefits of the scheme, which includes the provision of 30 affordable apartments that will be used as part of YMCA DLG’s ‘transitional supported housing’ accommodation.

“We hope, further to reviewing the submitted plans and additional information, that the council will continue to engage is a positive manner, as required by the NPPF (National Planning Policy Framework), seeking solutions rather than obstacles in order that this important scheme can be delivered as quickly as possible.”

If planning permission is granted, the charity hopes to have put up the flats – which would be next to the council’s housing repairs centre – within four to six months.

Mr Frisby said: “The proposed development will be of a modular construction that will be mostly pre-assembled in a factory before being transported to the site for erection.

“The units themselves will be constructed in concrete but once in place they will be clad with brickwork with the upper most units surrounded in profiled zinc sheets.

“The use of brickwork is prevalent within the surrounding area and therefore is considered to be an appropriate material to use in this context.

“Overall, it is considered that the proposed development would result in a substantial improvement to the character of the area by replacing an underutilised and unkempt site with a high-quality building that would help enhance the visual quality of the area. 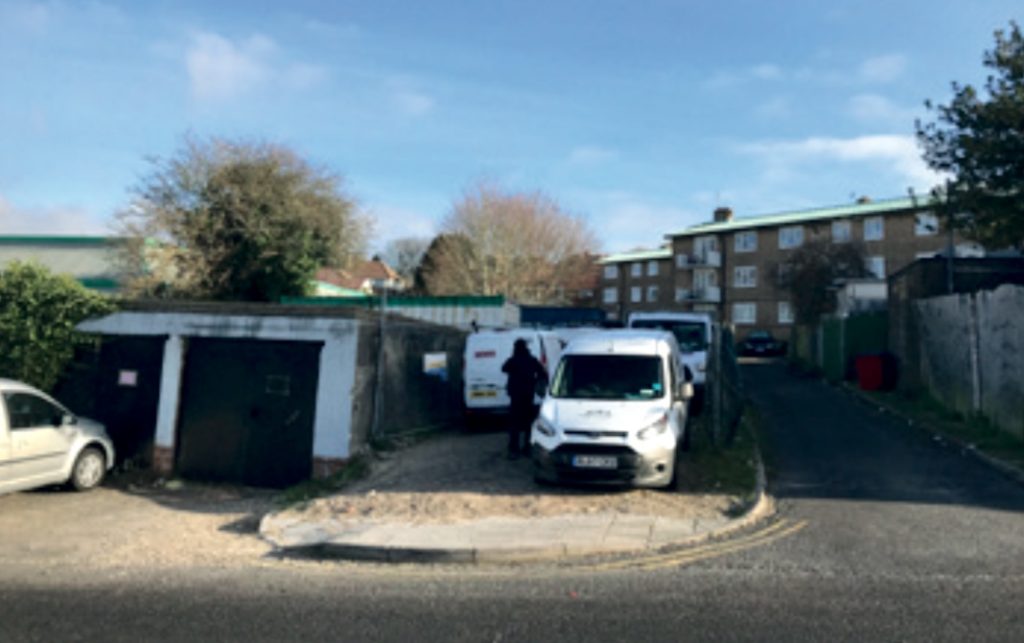 “This is a significant material benefit of the proposed development providing a genuine means to ensure that fewer young people within the city end up homeless and more have the opportunity to live full and successful lives in conjunction with YMCA DLG’s youth outreach work.

“The proposals will help to … reduce the likelihood of repeat homelessness.

“It is likely that some residents may have concerns about the creation of noise by residents given their younger ages.

“Each resident will have already progressed through the ‘supported housing pathway’ and therefore will have been assessed to be sufficiently independent and responsible to be provided accommodation within their transitional housing.

“Should it be required, there is a YMCA DLG night-time emergency response team in the city to handle urgent out-of-hours issues that arise in their accommodation and, while this is not a staffed housing scheme, there will be a daily presence on the scheme of YMCA DLG staff.” 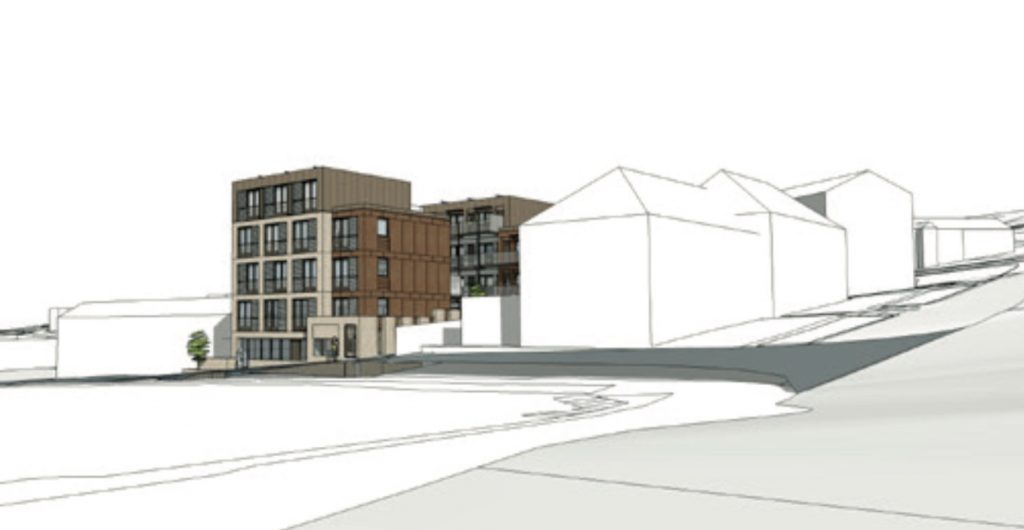 Mr Anson said: “The proposed units are a modular build with all of the units comprising a standard size and layout.

“The floor area of each studio unit would be 28 square metres … below the Nationally Described Space standard of 37sqm. This would represent a significant deficiency of 24 per cent below standard.

“Three wheelchair units have been included in the scheme which would be 32.57sqm in area which would also be below the NDS.

“The small size of units would not be considered acceptable for permanent housing designed to be occupied for up to two years.”

But Mr Frisby said: “It is recognised that the units are smaller than is usually sought under the Nationally Described Space (NDS) standards.

“However, it should be highlighted that the NDS (standards) are only government guidance and do not in themselves form planning policy.

“The proposed size of units is a result of seeking to ensure that each unit is genuinely single occupancy only.

“If the units were any larger this would encourage sharing and compromise the support being given for residents to live independently, make larger gatherings of visitors possible and dissuade residents from seeing a move to full independence as a positive move. 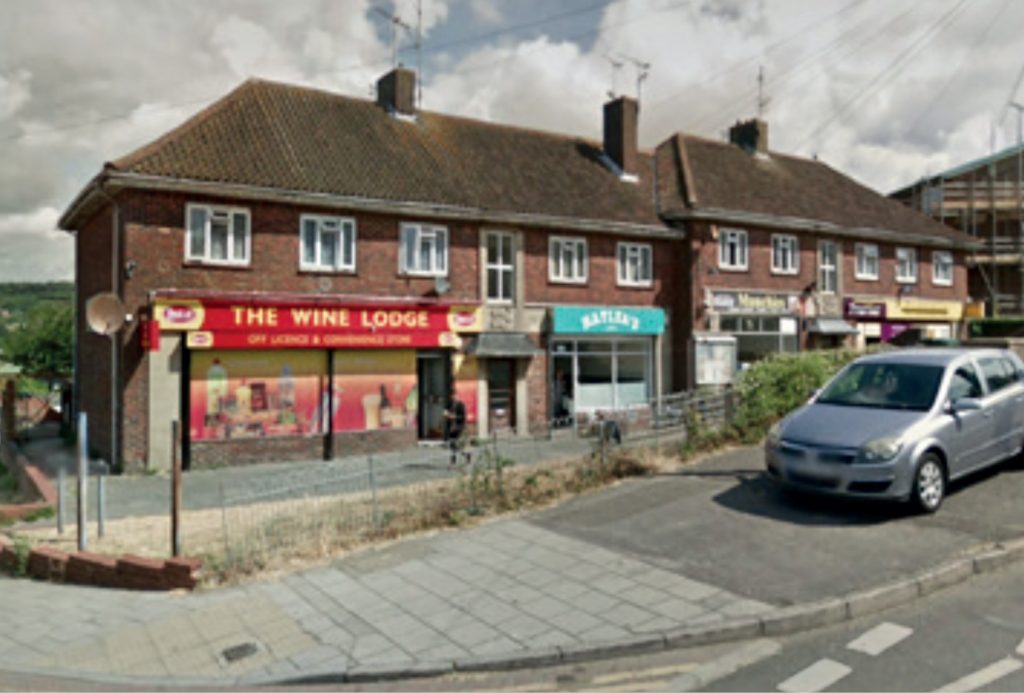 “This proposal represents a unique set of circumstances and opportunity to deliver low-cost housing and support to some of the most vulnerable young people in the city.”

YMCA DLG said that it would operate the scheme with a number of conditions, including

The charity added: “Rent will be affordable to those working full time at the national minimum wage. No deposit will be required prior to occupation.”

Transitional supported housing is the third stage of a “pathway” aimed at preparing young people for independent living. 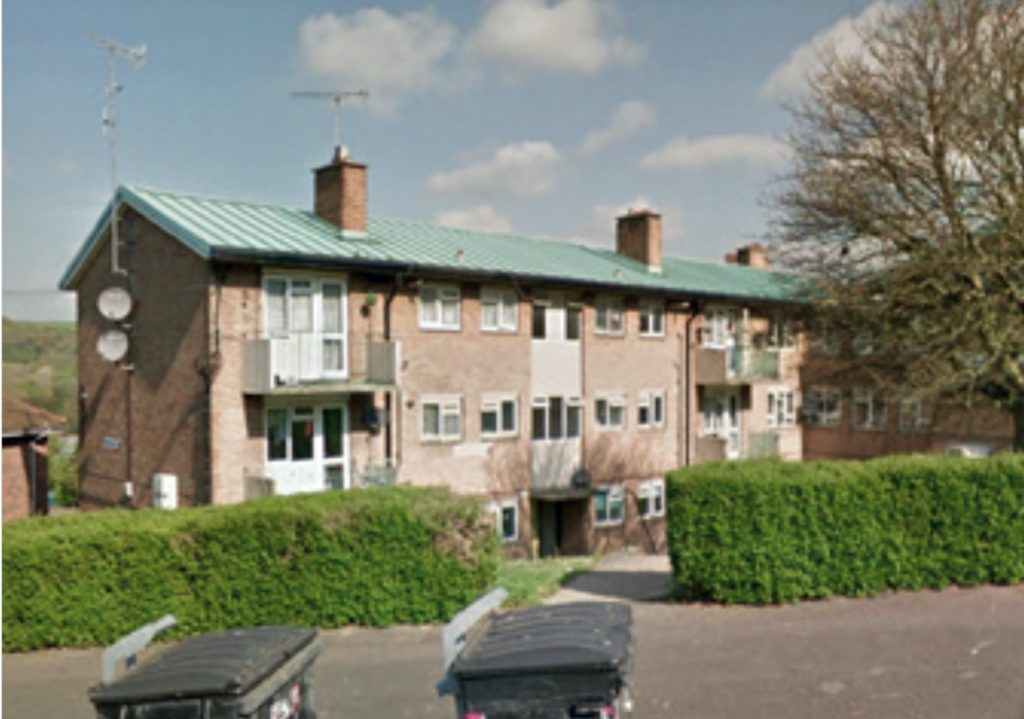 The Oakendene flats in Moulsecoomb Way

Mr Frisby added: “The modular units will be constructed in a factory before being transported to the site on trucks, they will then be crane-lifted unit by unit to form the main bulk of the buildings.

“Once in place, the brickwork and zinc cladding will be installed along with the remaining hard and soft landscaping and other finishing works.

“This will drastically reduce the amount of time it will take to construct the scheme, consequently resulting in less environmental and amenity impacts during the construction period.

“The modular construction methods used also means that the project will be highly efficient in the materials used and drastically reduce the amount of packaging and wastage. 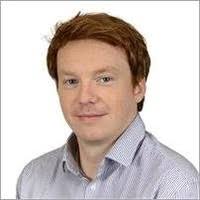 For more information, visit the planning pages on the council’s website and search for BH2019/02143.

A decision is due to be made by Monday 4 November.