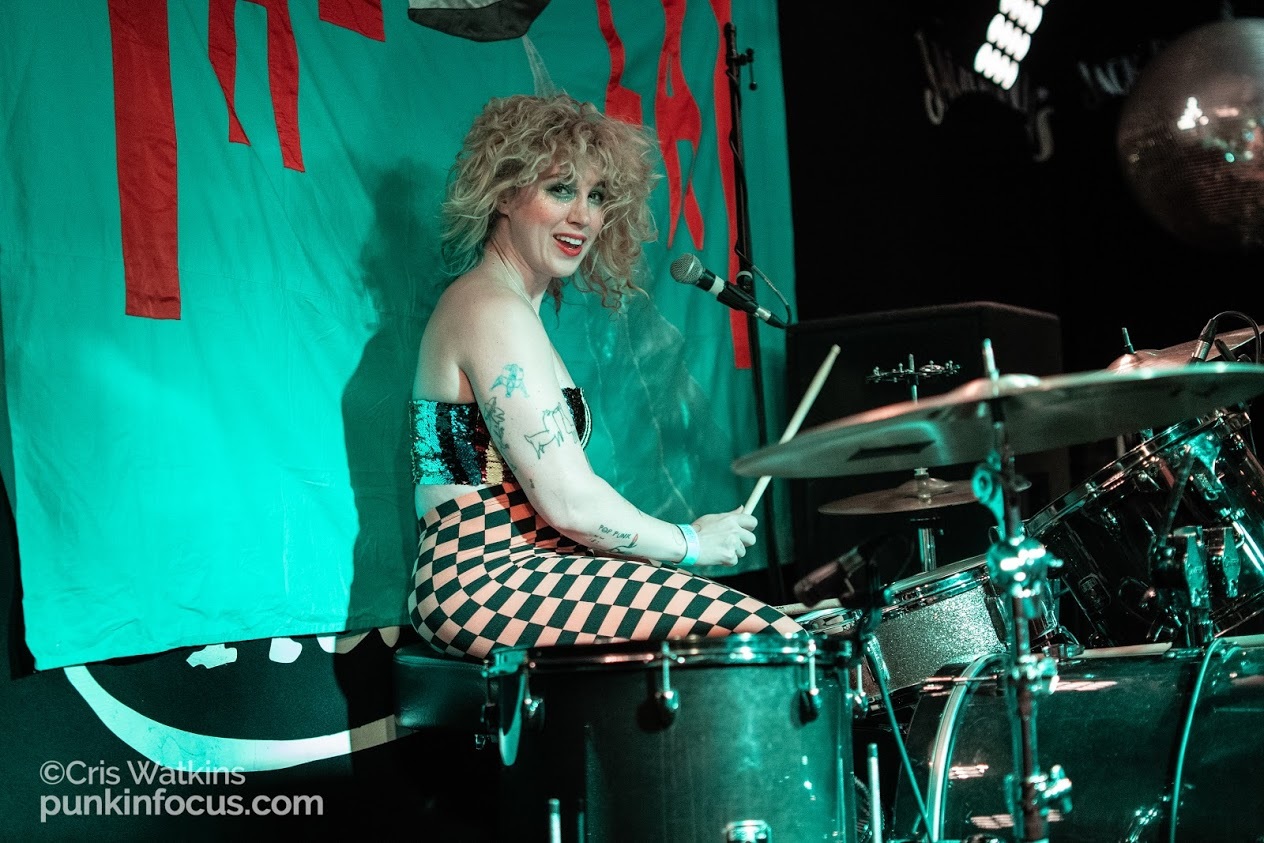 Seattle band Tacocat were closing their UK leg of their 20-date European tour tonight here in Brighton at the Hope & Ruin, in support of their new full-length album ‘This Mess Is A Place’ (which came out in May), having already performed in Leeds, Glasgow, Manchester, Cardiff and London. It was evident that they had enjoyed themselves thus far and were saddened to be leaving the country and even (jokingly) requested that if there were any immigration officers present, then they would like to meet with them after the end of their performance.

‘This Mess Is A Place’, which you can purchase from HERE, is their fourth long player and the first for Sub Pop, and heralds a more pop-driven and ebullient direction in their sound. They’ve shared a charming new claymation music video for ‘Crystal Ball’ from director Violet Crabtree – Watch it HERE. 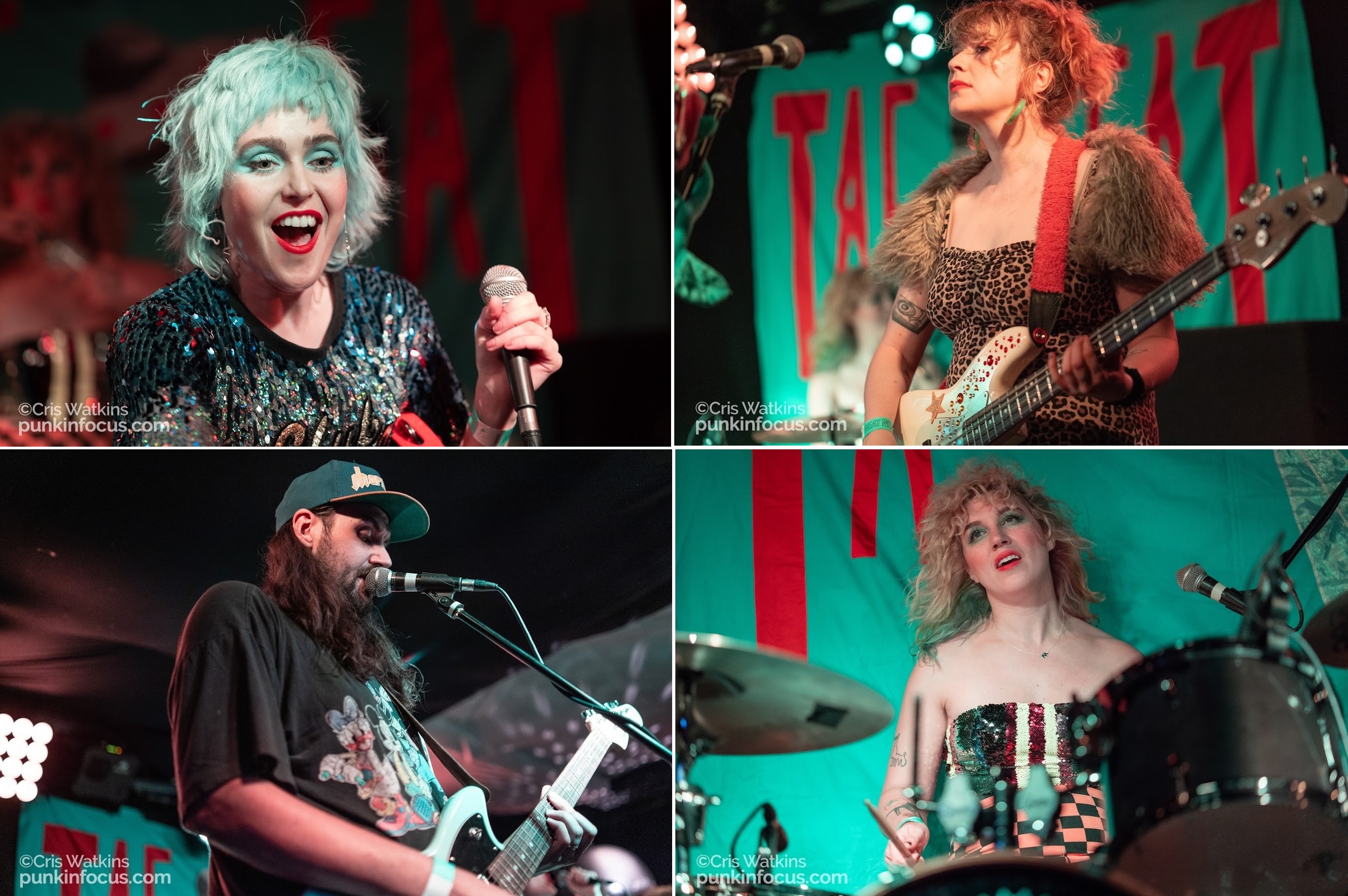 Tacocat formed back in 2007 and surprisingly this is my first encounter with the band face-to-face. The personnel are vocalist Emily Nokes, bassist Bree McKenna, guitarist Eric Randall, and drummer Lelah Maupin. They are a colourful bunch and are easy on the eye. They refer to themselves as sequin punk / platform pop / glitter core / confetti rock / neon floral joy-wave, so I’m sure you can guess how us punters were dazzled by their live spectacle. There’s no doom and gloom musically with this lot, although some of their subject matter might be of a serious nature, it is conveyed in a positive way, and they also see the lighter side of things. Thus their lyrical honesty, humour, and hit-making sensibilities have built the band a fiercely devoted fan-base over the years, one that has followed them from basements to dive bars to sold-out shows. Every step along the way has been a seamless progression from silly songs about Tonya Harding and psychic cats.

I have to come clean and say that prior to tonight’s performance, I was in the main blissfully unaware of their back catalogue (which includes albums ‘Shame Spiral’ from 2010, ‘NVM’ from 2014, ‘Lost Time’ from 2016 and newbie ‘This Mess Is A Place’ from this year) and that the videos that I had watched prior to attending this evening were OK, but strangely seemed to be lacking as compared to tonight’s performance. I’m not sure which one’s I had watched, but I must say that Tacocat were honestly light years better than I thought they were going to be. And the weird thing is that my colleague also felt exactly the same. Therefore after finishing this article I have a bit of catching up to do on Bandcamp under the Tacocat heading.

Virtually every tune got me wiggling my hips and taping my feet, which brought a smile to my face. Yes Tacocat are a feel good factor! From the off with ‘Bridge To Hawaii’, their swinging indie pop jangly beat was evident, coupled with Emily’s sweet vocals, the vibes in the room from the assorted punters was a flow of positive energy being thrown back at the stage – tonight was going to be time well spent.

Track two ‘The Internet’ came and went and was swiftly followed by ‘Hologram’ which was a pleasant number. But then …oh no crisis! Emily was in need of a little liquid refreshment and reached down to her beer…and disaster had struck, as it still had it’s top on and clearly no-one in the room was as well equipped as ‘Jaws’ from James Bond. How was the performance going to carry on without any liquid refreshment? Well you’re not going to believe it, but this petite lady at the front suddenly offers, what I believed to be a Swiss Army Knife, complete with all the necessary tooling, thus within seconds normality is resumed! Clearly this thoughtful punter had been a girl guide at some stage, and wasn’t intending to do any crowd surfing this evening as it would have dropped out of her pocket. In fact there wasn’t any crowd surfing by anyone, just good old bopping along.

Life carried on and up next was ‘Dana Katherine Scully’ of X-Files fame. I’m not sure I concur with Eric who pointed out that it took him 20 years to realise that ‘Spooky’ Mulder was the villain. Anyway, moving onto ‘Grains Of Salt’, which was next, and thankfully the thus far redundant Korg synth got the occasional plinking from Emily. This was followed by ‘New World’ which featured some great drumming by Lelah. ‘The Joke Of Life’ came next and was my favourite tune of the night. It reminded me of another bright American band, namely The B-52’s. Another catchy tune was ‘Rose-Colored Sky’ which was dedicated as a celebration of women’s monthly cycle (or was that ‘Crimson Wave’ with its surf beat?). We learnt that the oldest tune on the night ‘Volcano’ was about weed and had a great 80’s indie beat to it. I particularly enjoyed ‘I Love Seattle’ and ‘I Hate The Weekend’ reminded me of punk band Penetration, but their overall sound as a whole wouldn’t have strayed far from The Primitives.

Would I see these guys again? Hell yeah! Thanks to promoters ‘Neat Neat Neat’ for bringing the guys to Brighton.

Listen to Tacocat on their Bandcamp page HERE and visit their official website HERE. 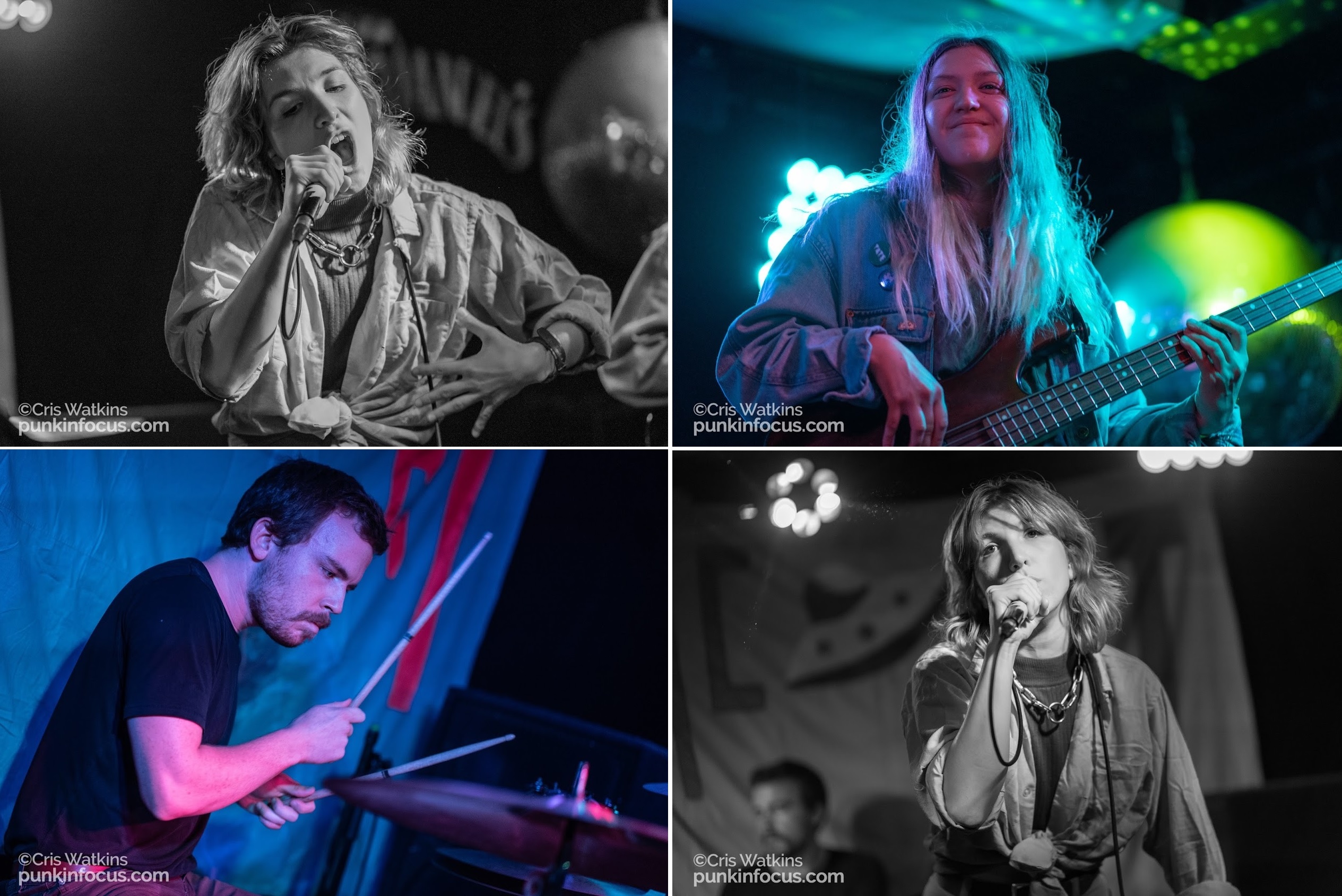 Support this evening came from the unusually named Twen, who are based in Nashville, Tennessee and is the brainchild of Jane Fitzsimmons with Ian Jones and for live work this evening they are assisted by Jeff Crenshaw and Gwendolyn MacPhee. They have a strong DIY ethic and take great pleasure in making their own merch and as a result, every piece is unique.

Their first foray into recording was the five tune ‘Twen Live’ which was back in October 2016. Their debut studio release was a single entitled ‘Waste’ which came out on 29th March this year. It was hotly followed by a second single called ‘Holy River’, both of which can be found on their forthcoming ‘Awestruck’ album which has a further eight tunes on it and it is due for release on 20th September.

Visually I would suggest that they could quite easily be mistaken for members of The Go! Team, but musically they are far from their sound. Jane is certainly expressive as she moves around the stage. She certainly feels the music and lyrics running through her body.

They opened their account tonight with ‘Azkaban’, which can be found on their forthcoming album. It certainly announced their arrival with 90’s style swirly guitars at the fore, thus relegating the vocals to the background. Based on their performance Twen are a tad difficult to pigeonhole, as their seven track set reminded me of seven different comparisons. For instance, track two was ‘Sway’, which was a floaty number akin to Amber Arcades, whereas song four, ‘Take A Number’ had elements of Blur, which was followed by ‘Baptism’, which was arguably the best track in my opinion, or at least on par with the opener, and ‘Baptism’ recounted in my brain the early days of Björk when she was a member of The Sugarcubes. Sadly the mic conked out after this, which would somewhat explain the vocals being drowned during the opening tune, but this was quickly rectified and they ended with the Tom Petty-esque ‘Damsel’.

For further information on Twen visit www.twenband.com and to hear their tunes visit their Bandcamp page HERE.

This wasn’t quite the end to our night out in Brighton as we had to swiftly leave and head on down to the Latest Music Bar in order to catch a live performance by Scare Taxi for the launch of their ‘Death By Music’ album. You can read that review HERE. 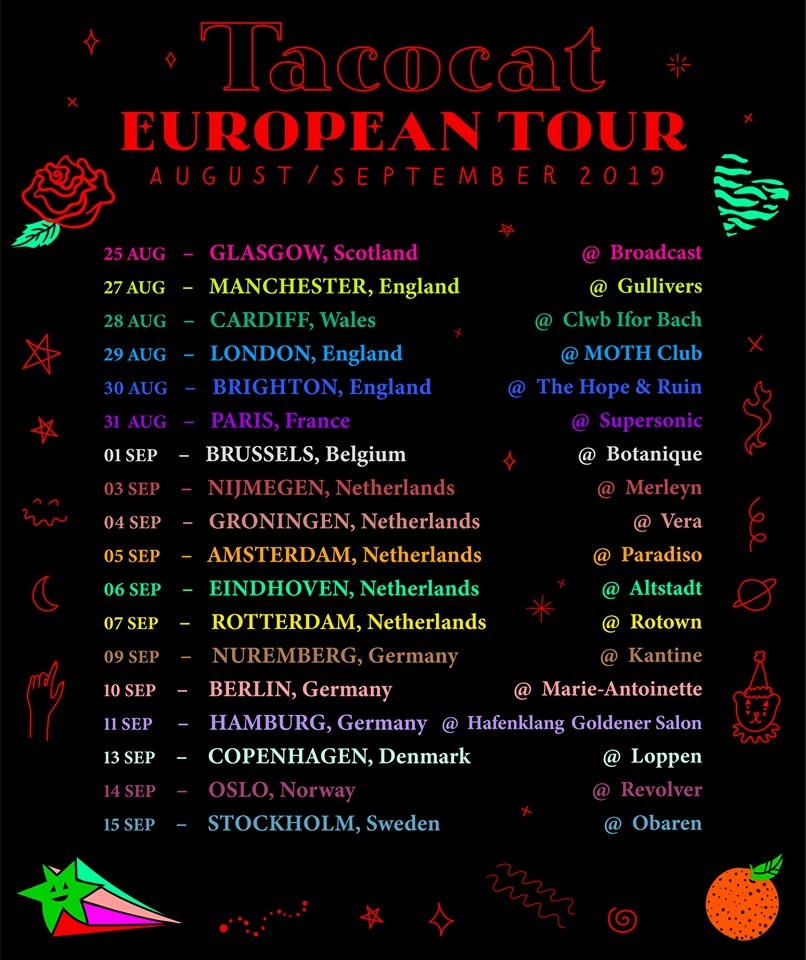 Could there be some late and surprise transfer activity for Brighton and Hove Albion?