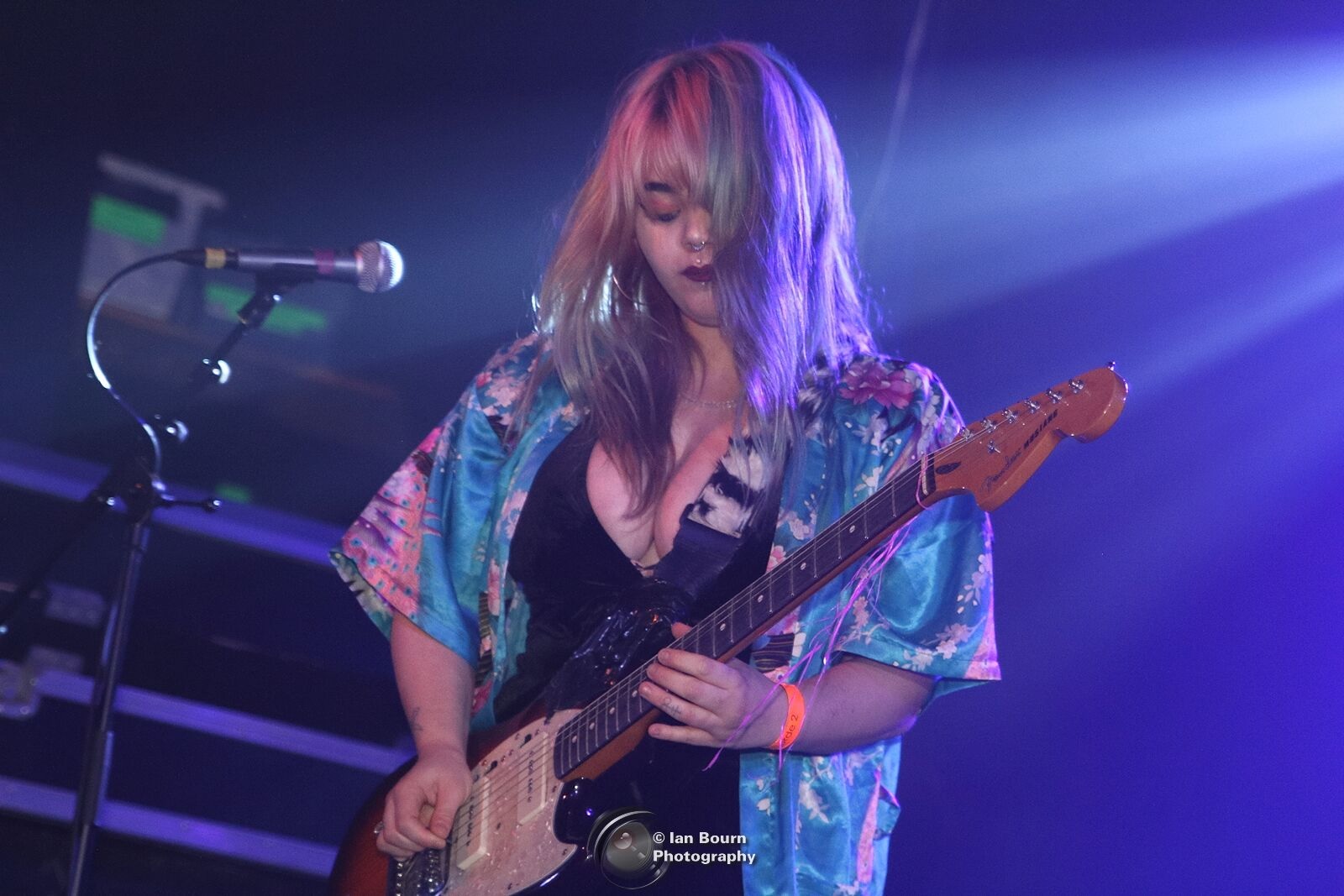 Hannah Villanueva performing with her band Pussyliquor at ‘Best Of Brighton 2’ (pic Ian Bourn Photography) (click on pic to enlarge!)

The Concorde 2 on Brighton seafront was certainly a hive of activity from 6pm to 11pm on Sunday 10th November, as they were hosting the second ever ‘Best Of Brighton’ event. The whole idea of the evening is to bring together a celebration of Brighton’s favourite bands, coupled with art, street food, beer tasting and comedy – basically a fab night out!

Although the event was taking place at the Concorde 2, it was in fact once again the brainchild of the guys at Black Rabbit Productions, who put together the inaugural one back in July – read our review of that HERE.

For ‘BoB2’, the Black Rabbit Productions team lined up no less than half a dozen decent Brighton music bands, which were interspersed with three DJ sets from Roots Garden; also a 15 minute comedy set from Charmaine Davies; as well as a sing-along from Suspiciously Elvis. Between the music sets, the punters could survey and indeed purchase live art by local artists Cassette Lord & IOT. Sampling and purchasing of the 4.2% ‘Session IPA’ and 4.1% ‘Zestiny’s Child Pale’ beers from the ‘Cloak & Dagger’ brewery seemed to be the order of the day with numerous punters, whilst others opted for the Californian inspired vegan food on offer from ‘Flux’. I hear that the Paprika Skin-On Fries were deelish!

After a tone-setting 25 minute DJ set from Roots Garden, it was time for the first band to grace the Concorde 2 stage. This was Greenness who had earned the right to perform a twenty minute set on the account of them being the winners of the Brighton Songwriting Contest 2019. The tune that won them this accolade was ‘Dance With The Light’ – you can listen to a brand new remix of that song HERE.

Brighton based Greenness are French singer-songwriter Cess Frangi and British musician and producer Graham Pratt. They refer to themselves as a folktronica duo – have a listen to their work HERE.

The next prestigious slot was given over to the ‘Winners of the Brighton Bands and Musicians poll’, who were iamwarface and they entertained the punters from 7:00pm to 7:30pm. The timing worked out just perfectly for their frontman Matt Warneford, who has been given a concert ticket as a birthday present to see Hawkwind perform from 9pm at the Theatre Royal in Brighton and so he bolted to New Road from Madeira Drive immediately after the successful iamwarface set. Read our Hawkwind gig review HERE.

iamwarface are best described as an Electro Rock Band who formed in Brighton and London in 2016. Vocalist Matt Warneford is joined in the band by Lou Matthews, Tom Howe, Mike Smith and Adam Stanley. The name is a metaphor for their own style of bombastic high-energy music. They have taken the pop route, but they keep it dangerous with a fusion of 80’s style vocals, abstract guitars, moody layered synth riffs and pounding drum beats. Matt was also clearly pleased with their performance as he has posted: “Yup. We smashed it. Thank you to Best Of Brighton 2 (BoB2) for having us. Was such a wicked night”. Grab their brand new 12” red coloured vinyl album release HERE.

The core of the band; singer-songwriters Adam Kidd and Aaron Kieran Neville, along with lead-guitarist Tom Alty, met at a Catholic secondary school in Hove, where they became close friends, and played in their earliest bands: cheeky young faces regularly performing on Brighton’s late 90’s pub gig scene. Fragile Creatures combine rock, pop and grunge with catchy melodies and are a solid nod to the halcyon heyday of British guitar music. They released their 12 tune debut album ‘…And Other Wild Things’ in 2016 on the Brighton’s Finest Presents label. Snap it up HERE.

Next up were the fabulous Pussyliquor quintet, who are Brighton’s answer to The Slits. The personnel are Ari Black (vocals), Hannah Villanueva (guitar), Lucy Priddle (guitar), Tallulah Turner-Fray (bass) and Victoria Lewis Piper (drums) and they say that they produce “pure uncensored female rage” and are “putting the amp in tampon” and are “raising oestrogen levels wherever we go”. I couldn’t have put it any better myself. The girls are no strangers to the Brighton & Hove News Music Team and have entertained us on several occasions in the city and surrounding towns. They are certainly one of the most exciting punk bands out there at the moment and their shows are a certainty to get you pogoing! It’s a crime that they are still relatively undiscovered! Surely with a bit of a push from all quarters they will break out and make it. Their material, which you can snap up HERE, can possibly be viewed as being rather confrontational in its subject matter, but blimey it’s more than 40 years since the Sex Pistols debut album burst on the scene, so surely folk can take it these days!

Their Concorde 2 set was actually well received, despite a mixup on timings and the crowd demanded a further two songs and were dutifully rewarded.

At 9:15pm it was the turn of Harry, Harry and Sam aka Les Bods to seduce the public for half an hour. They are a three piece band of Bods that specialise in playing 60’s and 70’s influenced garage rock, which is best enjoyed with the volume heading towards max. They were initially just a duo of Harry’s a couple of years or so ago and then Sam came on board. They were all previously in other outfits prior to Les Bods, but now they have certainly clicked and the future is looking bright for this Brighton based posse.

They sure had fun and have posted on social media: “Last night was incredible, the reception we got was phenomenal. Thank you all so much for going mental in the crowd! Sending out a massive thanks to @blackrabbitproductions for booking us bods!”

Suspiciously Elvis was also in the building and entertained the crowd with an impromptu 15 minute set. You can celebrate Christmas with ‘Elvis’ and his band by attending his concert at Brighton Komedia on Sunday 22nd December. Further details HERE.

Final band of the night was the Brighton based Los Albertos who managed to secure a whole hour set until closing time at 11pm. They are ska punk funky dub band that were most certainly guaranteed to get the party atmosphere going, and thus was the ideal choice to round off a truly successful evening.

Let’s hope that there will be a ‘Best Of Brighton 3’ next spring or summer as there is certainly a need for one in order to showcase how fab Brighton really is. 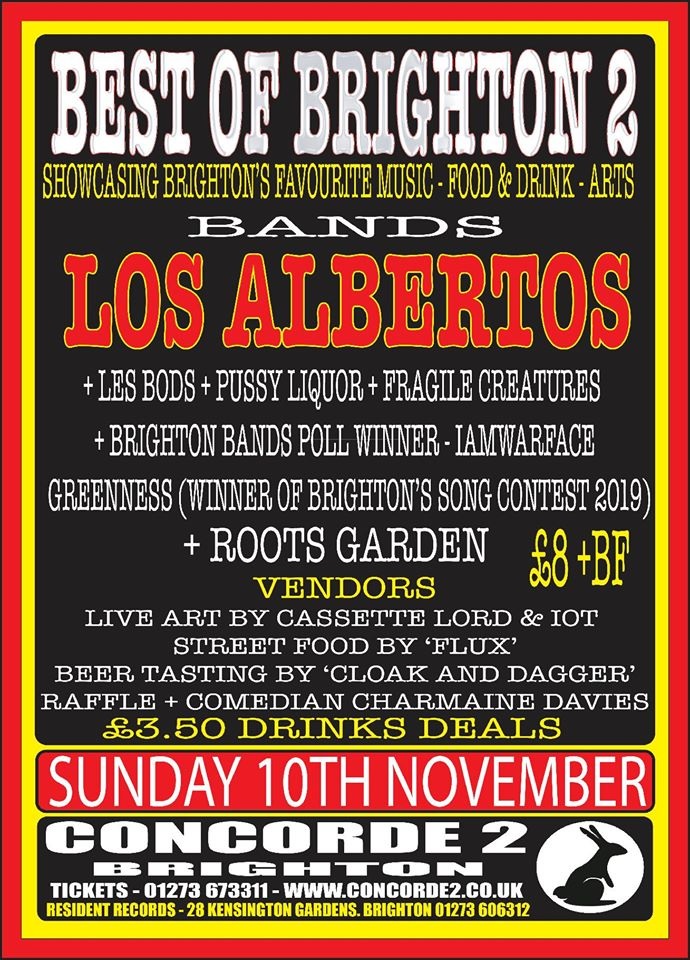