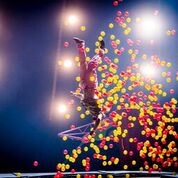 This winter season’s exciting new circus event for kids and families at the Brighton Dome has started, heralding the start of the school holidays! With performances from 17th – 27th December, this madcap group of Finnish acrobats bring a festive flavour to the city for ten days, with an exhilarating blend of stunts and physical comedy.

This new show, which is enjoyable for all the family, is a specially created spectacle from Race Horse Company. Having debuted to critical acclaim at Edinburgh Fringe (where they received 5 stars for the show), it now takes up residency in Brighton and Hove for the Christmas period.

Race Horse Company was born in 2008 out of need to create uncompromising, personal and completely new kind of contemporary circus. Their rough-and-ready performances are combine chaos, humour and surprise. Since the very beginning, Race Horse Company has focused on touring and so far produced six contemporary circus performances and three Circus cabarets.

The Finnish performers have developed the show without a director, resulting in a trick-fuelled show with unexpected surprises. The highly-skilled acrobats bring their own imagination to the stage, learning new skills and testing their own boundaries, and bizarrely the strength of clingfilm!

‘We’re excited to be performing at one of the UK’s most distinguished arts venues, Brighton Dome. Super Sunday is a show that, even after 150 performances, is intoxicating and fun for the artists themselves. We think there’s nothing better than to hear the laughter and screams of joy from the audience during our show. We can’t wait to bring it to Brighton this December.’

We can’t wait to see it!